Carbon is one of the most common atoms in the universe. Without carbon we couldn’t live like we do. Carbon has about 10 million compounds and roughly 1000 of them are essential for our living (source: Live Science). Carbon has also got a few allotropes; they are different forms of carbon. For example an allotrope of a carbon is diamond. Diamond is another form of carbon. I am going to inquire into carbon fiber; it is another allotrope of carbon, I am going to talk about how it helps solve global warming, how good is it at helping solve global warming and talk about its effects on economics and the environment.

Don’t waste time
Get a verified writer to help you with A Discussion on the Usage of Carbon Fiber in Cars Polluting the Earth
Hire writer
$35.80 for a 2-page paper

One of the biggest problems that we are facing on Earth today is global warming. Global warming happens when we burn too many fossil fuels and the gas is released into the atmosphere. When we use up energy, a lot of fossil fuels are burnt causing pollution, which then breaks the ozone layer.

Ozone layer is the layer around our atmosphere that absorbs the dangerous radiation given by the sun. Burning fossil fuels also release tons of carbon dioxide into our atmosphere.

Human activity is the number one cause to burning fossil fuels. Human activity includes thing like burning of petrol/diesel in vehicles and waste of energy in homes and other facilities. According to List Dose, the number one reason to global warming. The problem that I am specifically focusing on is cars burning too much fossil fuel, releasing large amounts of CO2 every day. (List Dose)

Most car fragments are made of steel. Steel is a strong but heavy metal, but on the other side, carbon fiber is an extremely strong and light material. According to How Stuff Works, carbon fiber is five times as strong, 2 times as hard yet weighs about two thirds less than steel. So, instead of manufacturing car fragments from steel, we could make them out of carbon fiber because if cars would be lighter, it would need less energy to move. Therefore the cars that use carbon fiber instead of steel would travel more without needing as much gasoline and this would reduce the amount of CO2 released from cars. (How Stuff Works)

Carbon fiber is good at helping the problem that cars release too much CO2. One reason for this is because it doesn’t just make a little difference to the amount of CO2 that cars release. It actually makes quite a big difference. According to USA Today if an average car were to replace all it’s steel fragments with carbon fiber, the car would weigh about 60% less! If the car weighed 60% less, (according to Oak Ridge National Laboratory) the fuel use would decrease by 30%, which would decrease the greenhouse gas emissions by 10-20%. (Oak Ridge National Laboratory)

Using carbon fiber in cars maybe good, but it doesn’t completely solve the problem. Cars still release tons of CO2 everyday. If steel car fragments would be replaced by carbon fiber fragments, the car would just reduce the amount of CO2 released, but it wouldn’t completely solve the problem so a still a lot of CO2 will be released and there will still be pollution and global warming.

A second reason that carbon fiber is good at solving this problem is safety. Carbon safety does not create any safety issues. Crash simulators have tested steel and carbon fiber cars and there was no difference. Actually F1 racing cars are made of carbon fiber, not for its lightweight but for safety. (How Stuff Works)

If carbon fiber were used in cars, it would also help the environment. As I explained earlier the usage of carbon fiber would reduce the greenhouse gas emissions, and if all cars used carbon fiber, global warming will decrease as well as air pollution so we are healthier and animals in colder climates and their environments will be healthier.

Another disadvantage about carbon fiber though is that you cannot recycle it. Today a lot of steel car fragment are melted then recycled at special facilities. You can make new cars from old cars if the have steel, you can even make other things with recycled steel like buildings. But that does not work the same way with carbon fiber. Carbon fiber cannot be melted down like steel and it is also very hard to recycle. But when carbon fiber is recycled, it looses its strength meaning it is not strong enough to build anything. So, all the disposed carbon fiber generates a lot of waste, which makes the environment unhealthier. (USA Today)

In conclusion, usage of carbon fiber in cars could be a good way to reduce the amount of CO2 emissions and help reduce global warming while being a safe and a more environmentally cleaner that steel. Carbon fiber has the potential of decreasing global warming, and also can be a new alternative to keep our environment cleaner but it also has some obstacles to go through before it can be used in all cars. Some of these obstacles can be overcome in time. The cost of carbon fiber will sure decrease overtime and maybe humans will find a way to recycle carbon fiber successfully so it doesn’t leave a lot of waste when being disposed.

A Discussion on the Usage of Carbon Fiber in Cars Polluting the Earth. (2021, Oct 31). Retrieved from http://envrexperts.com/free-essays/essay-about-discussion-usage-carbon-fiber-cars-polluting-earth 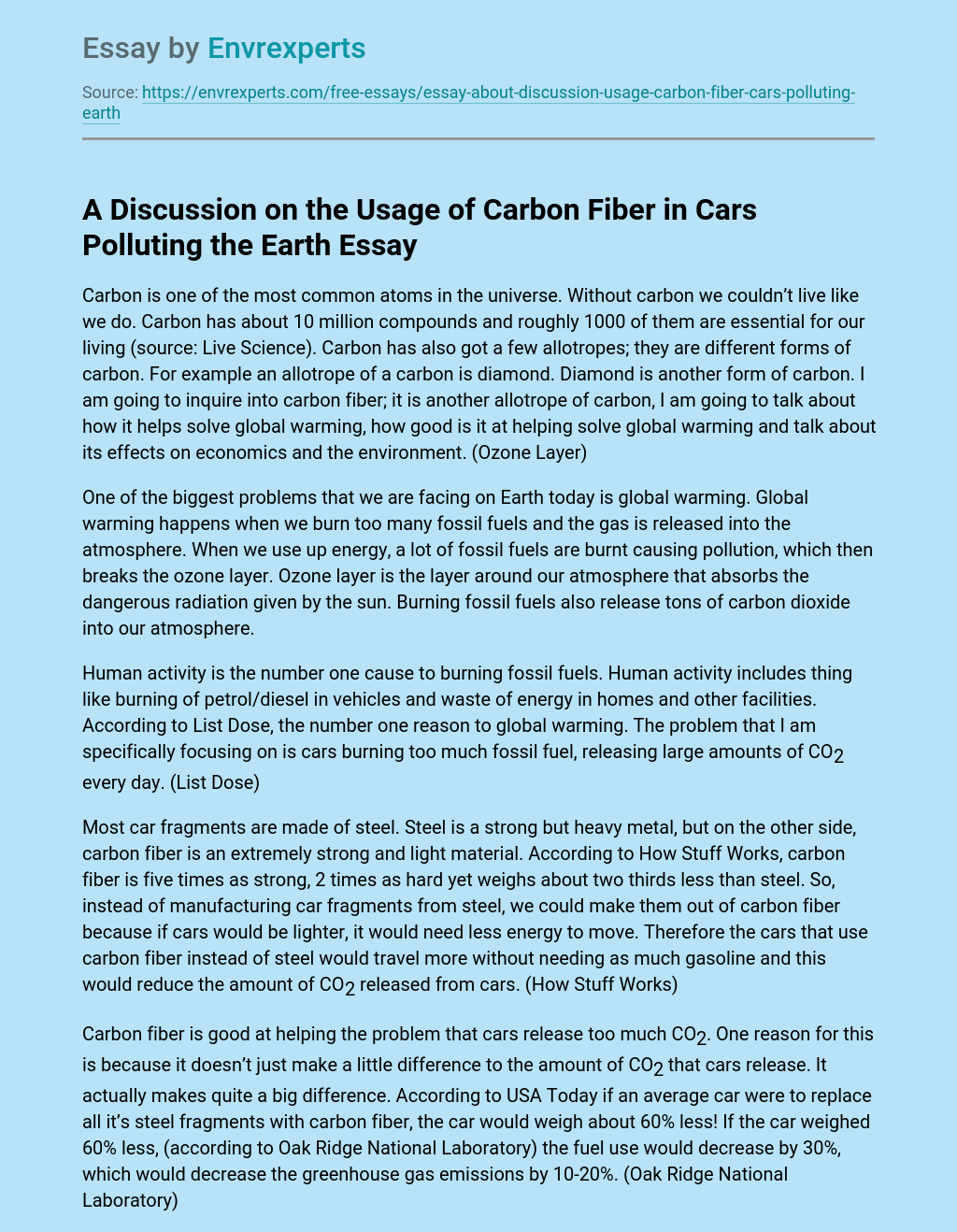