A Discussion on the Wind Power Battle in South Texas

Wind farms, in the past, has been looked at as an idea from the future. It is a cleaner way to generate electricity without harming the environment. The economy even seems to benefit from such renewable energy sources. Yet, with every good things comes several bad consequences. It is up to the city council to decide what they wish to do with the farms, but more important is what the general public believes to be the best cause of action and persuade the city council members of their positon.

Don’t waste time
Get a verified writer to help you with A Discussion on the Wind Power Battle in South Texas
Hire writer
$35.80 for a 2-page paper

Apex Clean Energy supports the wind farms wholeheartedly, but since they are in charge of the Chapman Ranch Wind Farm that comes without questions. However, the city council, neighborhood associations including the Corpus Christi Association of Realtors, Corpus Christi broadcasters (radio, TV, and National Weather Service), as well as taxpayers are against the building of wind farms near the city, especially in the area Apex plans on building on, the Chapman Ranch area.

The building of this specific wind farm will add to the already 196 turbines existing in the San Patricio area, which has already changed the “skyline of Corpus Christi”. The fear of city council members seems to be th continuin and long lasting effects on the current growth and development on the south side of Corpus Christi. Currently, Corpus Christi’s economy is at a healthy level with the “heart of the Eagle Ford” shale formation a mere “70 miles away”. This eliminates the prevailing need to create a stable economy and allows the city council members to make choices based on the general public instead of what would make the city a better place based on the amount of money being circulated.

Another fear of the city council is that there is an absence of current regulations by the “city, county, state, or federal” agencies put on wind farms being built. In regards to the lack of regulations, the City Council has voted to annex a small portion of the area proposed to be built on. The main reason for this is to regulate the development of the Chapman Ranch and eliminate the growth of future wind farms. By annexing the land, the city would gain “control and a say over what can be built in the Chapman Ranch area”. However, Apex has offered to shrink the size of the project as well as offer up other solutions so that the City Council members will not feel the need to annex the area affected. The fact that they do not wish to let that area be annexed and are currently trying to “[figure] out what the city’s rights are”, goes to show that they do not want the city of Corpus Christi involved in the development and construction of the wind farm. Some other people that are worried about the advancement of this wind farm are more worried about the damage it will do to the Navy’s aviation training, impact to broadcast signals, and the affect it may have on the National Weather Service’s Doppler radar. Currently, the National Weather Service “tries to avoid wind turbines going up within four kilometers because it can block the radar’s beam, obstructing its view”. There are also residents who have been alarmed by the plausibility of living near such loud machines that will in turn devalue their property and could harm the environment in other ways. The development of transmission lines for turbines will cost billions of dollars more than what was previously expected and will cost “every customer within the areas of the state’s principal power grid is on the hook for more than $1,000 to pay for the transmission lines”. In the image above, the wind power classification for areas all over Texas are established and expressed through different colors. The Panhandles has the greatest area with good quality winds. South Texas has a steady and strong sea breeze that could be suitable for commercial development, but there are other portions of Texas that contain more land with better quality of wind. Most wind farms receive tax credits and other benefits paid by taxpayers because they are seen as a step in the right direction. However, these tax credits have started to expire starting on December 31st, of 2012. They were renewed again until the end of the year in 2013.  “Because wind farms must begin operating [by December 31st, 2012] to be eligible for the credit, which they can then claim for 10 years, developers are rushing to finish wind farms”. This has led to an increase in faulty products being forced in the air and into production, whether or not they were safely established. The IRS has established another tax break that will last until December 31st of 2014. Projects that are not under construction before January 1st of 2015 are ineligible for this credit. This might lead to the demand to start building these wind farms. The amount of money this new cleaner energy source creates is largely overestimated as

“[George Taylor] explains that he started with 8.2 cents per kWh, reflecting total installation costs of $2,000 per kw of capacity. Then backed out an assumed 30-year lifespan for the turbines (optimistic), which increases the cost to 9.3 cents per kwh. Then after backing out the effect of subsidies allowing accelerted depreciation for wind investments you get 10.1 cents. Next, add the costs of keeping gas-fired plants available, but running at reduced capacity, to balance the variable performance of wind — 1.7 cents. Extra fuel for those plants adds another 0.6 cents. Finally, tack on 2.7 cents for new transmission line investments needed to get new wind power to market”.

However, the positive side effects include eliminating “nasty environmental issues like coal, nuclear or even neutral gas”. Apex Clean Energy has tried working with the City of Corpus Christi by offering five different solutions to different problems including decreasing the size of the project by over thirty-five percent, reimbursing the city for upgrades to the airport and radar studies, making sixty-five percent of tax-like payments, working with local radio and TV stations as well as with the FAA, Navy, and DOD to work on air traffic conditions. The wind farm is anticipated to bring substantial monetary benefits to the area. The long term revenue created by the wind farm will help schools, the local government, and landowners and bring in constant taxable income.

As a young adult, futuristic thinker, and resident of the Coastal Bend, I believe that allowing the wind farm to be built here will be beneficial at first but will hurt the future of the area in the next twenty or so years when wind farms become a thing of the past. There are few, if any, ways to dispose of the large turbines and will probably be left to the city to deal with which will cost more money than it would save in the long run. Also, with the city growing on the south side, letting the wind farms build on that side would hurt the current growth which could be a longer lasting benefit to the economy than the Chapman Ranch Wind Farms. Yet, at the same time, wind farms will help push the country towards searching for cleaner energy sources that are renewable and will open up more jobs in the immediate area. The future of the economy is more important to me than the immediate outcome of building such large fans near the Corpus Christi skyline. The creation of jobs promised by Apex may not take into consideration the jobs that can be lost due to a lack of interest in having a corporation or business operating that close to turbines.

A Discussion on the Wind Power Battle in South Texas. (2021, Oct 31). Retrieved from http://envrexperts.com/free-essays/essay-about-discussion-wind-power-battle-south-texas 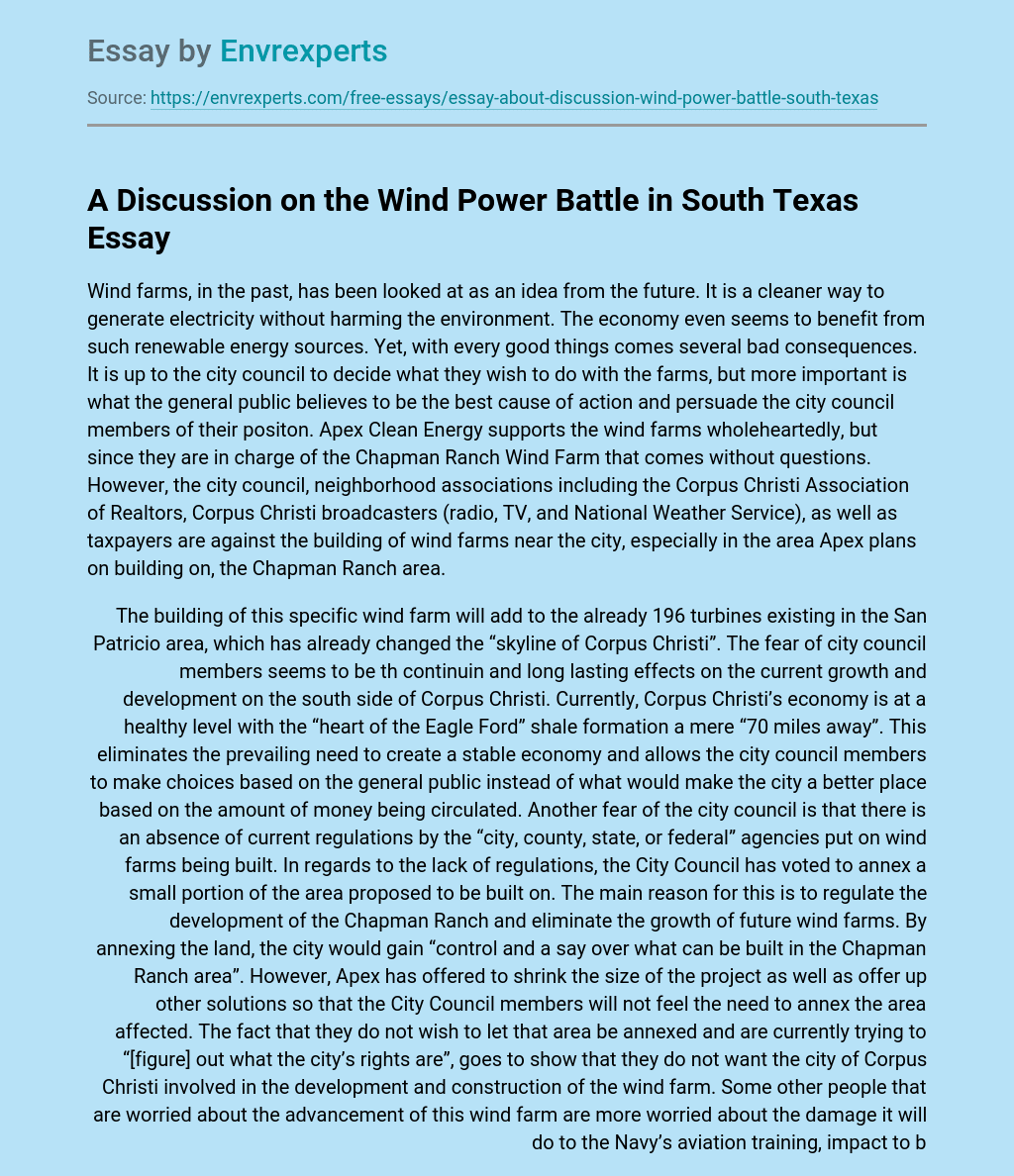