Сlimate change is the sword of Damocles hanging over international politics in the twenty-first century. There has been an improvement in the past twenty years of the scientific understanding of the causes and the dramatic consequences of the global warming – caused by the accumulation of the greenhouse gases in the atmosphere. The Intergovernmental Panel on Climate Change (IPCC) created in 2007 states that with ‘very high confidence…the global average net effect of human activities since 1750 has been one of warning' (IPCC, 2007: 37).

Don’t waste time
Get a verified writer to help you with Discussions on Сlimate Change
Hire writer
$35.80 for a 2-page paper

Yet, despite the presence of this global threat, global negotiations are complex and scientific evidence does not necessarily need to concrete policy outcomes. This essay will argue that in order to understand why climate change negotiations are particularly difficult it is important on one hand to understand the role of norms and ideational factors at the negotiating table, as the case study of Chinese economic diplomacy in climate change negotiations will demonstrate. On the other hand, it is important to assess the governance process in climate change negotiations because it points to how the logic of the two-level games plays an important role in outlining the varieties of actors involved in the process and the fact that negotiators not only have to deal with respond to demands in the international arena, but also on the domestic level.

This will be illustrated with reference to different negotiating grouping in climate change negotiations and tensions both at the domestic and international level with COP13 at Bali.

In order to assess why negotiations about climate change are so difficult, it is important to offer an overview of the relevant literature about the topic.

The analytical tools provided by rationalism constructivism and two-level games offer useful lenses to assess the causes of difficulties in climate change negotiations. From a constructivist perspective, ideas about climate change play an important role in having an impact on politics. The problem of the role of ideas in relation to climate change is that there are a plethora of identities that are involved by this concept, this is to say that different officials and policy-makers perceive differently the degree of importance of climate change. As Harris argues the spectrum of views on climate change is very wide' (Harris, 2009: 10). The key issue here is that there is a mismatch between the scientific claims about the increasing importance of climate change and the perceptions of the policy makers about the problem, as Harris (2009: 10) argues the climate regime has been constructed on a weak ideational foundation based on out-of-date…science sullied by "climate skeptics” and popular media.

According to rationalism, one of the key problems with climate change negotiations is that they imply universal participation. In this respect, Sebenius (1993: 198) argues that 'It would be a very time-consuming mistake for climate change negotiators to create a universally inclusive process with respect to both issues and participants, together with the requirements of consensus on an overall package deal.' This explains why climate change negotiations are subject to difficulties. One of the key problems related to this is that climate change decisions despite their global urgency they underpin different levels of political bargaining and action. As Christensen (2011: 304) notes the difficulty of global climate negotiations is given by the fact that they involve several different agendas and they include not only governments but also non-state actors. Moreover, the issue of climate change is linked to other issues e.g. 'peace and security, poverty alleviation, economic growth, trade surpluses and deficits, and global governance structures.'

Furthermore, it is important to note that governments, besides having to deal with the factors above discussed also need to take into accounts the importance of media, companies and organizations in the process. In this respect, it is also important to consider that the room for the governments to negotiate is heavily influenced by the process of two-level games, that is to say that governments have to respond to demands and challenged both at the domestic and the international level (Putnam, 1988: 427-430). As a consequence, the several conceptions of climate politics and the identities that emerge as a consequence of this diversity lead to the fact that actors have conflicting interests and as a consequence make the achievement of an agreement in climate change negotiations complicated. This essay will primarily focus on the constructivist and two-level governance explanation that accounts for the difficulties in climate change negotiations as these are the two most effective theoretical tools to explain this phenomenon as the case study of Chinese economic diplomacy in climate change negotiations and the governance process explaining the behaviour of actors in climate change negotiations demonstrate.

Firstly, it is important to note how constructivist accounts offer a useful insight into why climate change negotiations present difficulties. Constructivism does take into account the importance of both material and normative elements in accounting for an explanation of patterns in the international system (Wendt, 1992: 394). Moreover constructivists argue that it is also important to take into account the interplaying role of both structure and agency, as Finnemore (1996: 24) argues it is pivotal to 'emphasize the construction of social structures by agents as well as the ways in which those structures, in turn, influence and reconstruct agents. In this respect, constructivism plays an important role in explaining difficulties emerging in climate change negotiations because it highlights how political values and norms are at stake. This sheds a light on the importance of political discourse for climate change negotiations. In this regard, it is important to note that Haas (2004: 571) offers a convincing account how scientific evidence about the urgency of climate change is not always necessarily translated into policy outcomes. He identifies three main factors that are relevant in this respect: firstly, scientific evidence is not enough to provide a blue-print for action for policy-makers; secondly, science is not necessarily based on objective assumptions, this is to say, that scientific findings have also to be considered to be advanced to a specific audience for specific purposes, finally, political consideration by negotiators play a role in the process of evaluation of the findings.

In this context, it is interesting to observe how constructivist tool of analysis offer a useful explanation of the reason why rigidity in Chinese Diplomacy has caused difficulties in Climate Change Negotiations. As Stalley (2013: 1) argues, as it is important to assess the impact of equity norms in China's Climate Change diplomacy. That is to say. that Chinese opposition to emission limits is not merely determined by economic interests, rather the issue of equity plays an important role. Firstly, as Schimmelfennig (2001: 48) notes this is because it allows Chine to pursue its self-interests on the international stage owing to a 'strategic-use of norm-based arguments'. This is because, from a rhetoric perspective, China has framed the debate about environmental justice in terms of North-South Issue by the promotion of common but differentiated responsibility (CBDR). As Honkonen (2009: 69) notes: 'The principle of CBDR has developed an answer to the voices (mainly coming from the developing world) demanding fairer rules to international environmental cooperation.' Thus, China, as Stalley argues (2013: 4) used this CBDR rhetoric to promote the views and shared identity of the developing worlds. Moreover, it is important to note that role of fairness plays for instance for Chinese academics such as Zhang: (2010, 203) demonstrate how China's rhetoric about equity arguments is not merely dominated by material interests. As Yu Qingtai (2010) noted: 'I cannot accept someone from a developed nation having more right than me to consume energy. We are all created equal – this is not an empty slogan.' In conclusion, a constructivist perspective is useful to explain difficulties in climate change negotiations for instance in the case of China because the refusal of emission limits is not only given by national interests, but also by fairness norms and shared system of values with developing countries. As Stalley (2013: 4) importantly observes this is importance to note in the framing of the debate at Kyoto about the Clean Development Mechanism (CDM). China was clearly benefitting economically from the CDM; however, it resisted for several years the implementation of the flexible mechanisms including the CDM because it was an attempt to introduce requirements for developing countries.

In order to fully comprehend why climate change negotiations are so often difficult it is important not only to assess why beside the presence of contextual rules determining a pre-existing social structure that is governed by a set of norms, it is also important to consider that the contextual rules of the international sphere might differ from the ones in the domestic sphere this explains tensions in climate change negotiations between different interests not only at the international level but also at the domestic level. As a consequence, as Giddens (1986: 5-14) argues action plays an important role in modifying structure and the rules. This idea links back to the concept of twolevel games as advanced by Putnam (1988: 427-430) according to which governments in the negotiation process need to interact both with the domestic and the international level. In this respect, as Christensen (2011: 305) argues it is important to note how governments try simultaneously to affect the domestic and the international level. This happens in three main ways: Firstly, governments try to practice preference shaping or cultural hegemony (Lukes, 2005: 14-16) by influencing the framing of ideas about the regional and global affairs order; secondly, governments try to do that by influencing the regional and global agenda setting; thirdly, the power of interaction does play a really important role in negotiations (Dahl, 1962: 37). As a consequence, governments, make use of alliances and coalitions in order to pursue the objectives of their agendas. This threefold way of action pursued by government, as Christensen (2011: 306) argues plays an important role in climate change negotiations and explains why this is an extremely complicated process as he notes 'This threefold way of action remains central to policymaking at global and regional, as well as national, levels. It becomes even more complex as the agenda-setting is constantly evolving, through interaction among different levels.' This is a key contribution in order to understand how negotiations about climate change are so difficult because it underlines how a plethora of interests and actors adds complexity to the process.

The above point is important to note the difficulties of the main groupings for climate change negotiations. As Christensen (2011: 306) notes, there were more than 190 governments at COP13 in Bali and the same in Copenhagen in 2009. Each of these governments negotiated individually but as parties that took part in the Framework convention and the Kyoto Protocol they also combined in negotiating identities in parties that were sharing common values and approaches. In this context, there are four different entities: the G77 representing 130 developing countries, the Umbrella Group that consists of non-EU developed countries and ex-communist states, the European Union (EU) and the Environmental Identity Group and among these different groups it is possible to note complexity within the groups and among the groups (Christensen 306-309). It is important to note, though, how in this context negotiations and process for climate change remain difficult, especially when it comes to achieveng agreement on global emission because not only of the differences between the position of different countries at the international level but also because of the differences within the individual countries at the domestic level. Thus, Putnam's two-level games offer a useful insight into these dynamics. This is important to analyse COP13 at Bali. As Christensen (2011: 311) argues the issue of governance complicated the negotiations as it 'was an underlying and complicated issue touching upon all areas, basically addressing controversial matters such as the relations between developed and developing countries and the possible relationship between UN bodies and parties.' 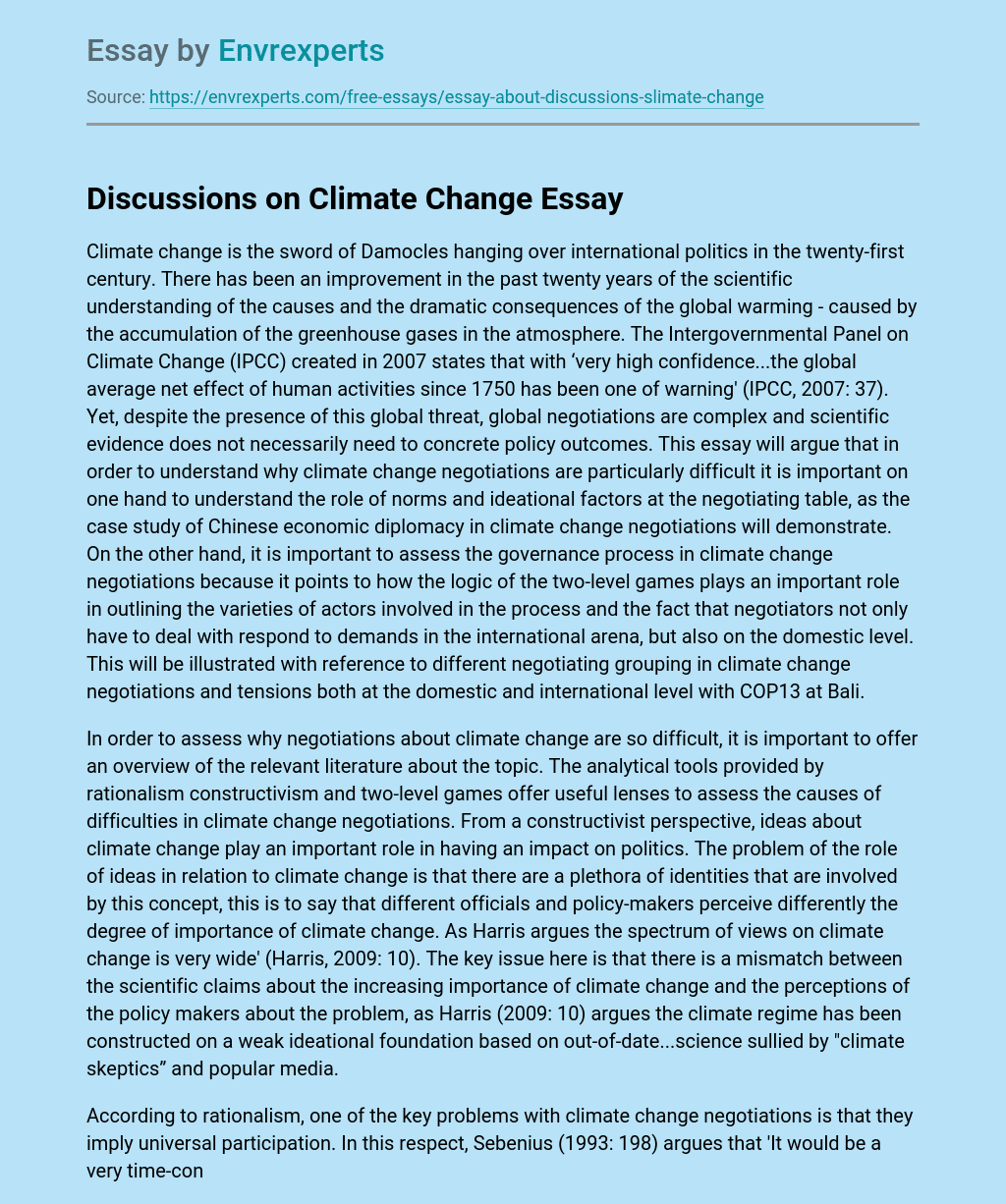