From the early days of industrial revolution till date, the world has experienced a hand full of major accidents with numerous fatalities, economic losses, and damage to the man and to the environment. These accidents are considered highly dangerous to human health and the environment. Consequence assessment is very important to predict and prevent deleterious effects of these events. Oxidizing agents have the largest application in microbiological control of the water systems and include but not limited to halogens, chlorine, bromine and iodine.

Don’t waste time
Get a verified writer to help you with Dispersion Modelling for Accidental Release
Hire writer
$35.80 for a 2-page paper

Chlorine on its own is a toxic material that is most times used in water treatment plants as disinfectants. Chlorine is a strong oxidizing agent that can in combination with Protoplasma form stable nitrogen-chlorine bonds in proteins. Therefore, it is toxic to all the living organisms CITATION Ili18 \l 1033 (Ilic, Ilic, &amp; Bjelic, 2018).

The toxicity of a chemical substance to a living organism is under the influence of specific factors such as its concentration, pH, temperature, ionic strength and other chemicals and wastes in the system.

A major objective of drinking water treatment is to provide water that is both microbiologically and chemically safe for human consumption. The combination of conventional drinking water treatment along with disinfection has proven to be one of the major public health advances in modern times. Chlorine mostly act as the disinfectant used to treat water for microbiological protection before it is introduced into a drinking water distribution system. Chlorine is an essential material to protect human from outbreaks of waterborne disease.

Population growth and developing the water treatment technology make extensive use of consequence analysis for prediction and prevent the harmful effects of chlorine release in chemical plants CITATION Ili18 \l 1033 (Ilic, Ilic, &amp; Bjelic, 2018).
A case of chlorine gas accident is the accident that occurred on the 27th of May 2008 at Jamshedpur in India. The people of Jamshedpur were caught unaware. They were exposed to a dangerous, dense, pungent, pale green, and poisonous gas known as chlorine. This gas was said to have leaked from unused cylinder lying in the Tata motor’s water treatment plant for the past ten years, about 150 to 200 people were hospitalized. Another case is the accidental release of chlorine gas in California in 2005 when 18 freight cars derailed and released 120,000 pounds of chlorine gas in the mill town of Graniteville, S. C. Nine people died in the process, at least 1400 people were exposed to the released gas, resulting in more than 550 people treated at hospitals, also including some with severe lung injuries. More than 5000 people had no choice but to evacuate from their homes.
The airborne transport of toxic material away from the accident site is described by dispersion modelling. So, public safety responders and emergency management personnel use toxic gas dispersion models for emergency planning of accidental chemical releases CITATION MOH94 \l 1033 (MOHAN, PANWAR, &amp; SINGH , 1994).

From time to time as industrial activities take place, the ever increasing and complex processing of hazardous chemicals occuring in chemical process plants or industries is a potential danger to the public and environment. Accidents in process industry can occur as a result of failure of process equipment, operational mistakes, and human error as well as external interruptions like natural disasters. Although reasonable measure of efforts have been made to prevent industrial accidents, still accidents are still a continuous occuring event in chemical process industries. So, in addition to the preventive measures, specific emergency management measures are also required to reduce the consequences of accidents associated with industrial hazards CITATION Sun15 \l 1033 (Sundararaj &amp; Soman, 2015). Preventive measures are the most significant approach to ensure that safety is achieved in industrial activities, at the same time the emergency management measures are also significant. Emergency management simply means the deployment of science, technology, planning, and management to deal with extreme events, damage to property and community life. Therefore, the emergency authorities concerned with emergency management are required to prepare themselves and be in a state of readiness at all times to tackle any emergency situations and prevent any disaster from occuring. To attain this state of readiness, systematic training should be given to the personnel involved in the emergency response plan (ERP). To develop a well-defined and suitable ERP requires a systematic review of hazards associated with plant facility and their consequences or effect on the humans, equipments, and the environment at large. The worst-case scenarios are generally used in the consequence assessment for analyzing the most severe hazard that might occur in a process plant. It is of these essence that this project work hopes to utilize the power of computer aid dispersion model for the real time evaluation of an emergency such as the accidental release of chlorine gas CITATION Sun15 \l 1033 (Sundararaj &amp; Soman, 2015).

The increasing use of chlorine gas (which is a hazardous and toxic gas) and the associated potential risk warrant development of practical and well-tested models for estimating vulnerable zones in relation to their accidental release in the atmosphere. From the industrial point of view, there is a serious need for formulating strategies to handle hazardous substances in the most possible safest way. The manufacturing, storage, and usage of chlorine gas pose a serious risk to the industry, people, and the environment. Accidental release of chlorine gas can lead to emergencies CITATION GuK02 \l 1033 (GuKlogylu, Kara, &amp; Erten, 2002). Hence it is of extreme importance to tackle this issue in the most effective way possible, this entails the use of dispersion model.

This project will be based on the utilization of ALOHA software. The model predicts the concentration of the chemical in the atmosphere and the plume boundaries, it then share the resulting threat zone simultaneously with MARPLOT. Threat zone shows the area where the ground level concentration exceeds the range entered as the level of concern. MARPLOT is a mapping application that can be used together with ALOHA to provide a visual of the extent of the plume using a variety of base maps CITATION Bha15 \l 1033 (Bhattacharya &amp; Ganesh, 2015). The importance of ALOHA simulation results is that they provide consequence analysis and risk assessment. Results of the simulation could serve as a useful guide to create rescue plans, emergency responses, and neighbourhood warnings to ensure the safety of all the people in the area. ALOHA contains very powerful integral databases. It consists of data files with physical, chemical, and toxicological properties for hundreds of pure chemicals and some common chemical solutions . Usually, every chemical data file contains chemical name, CAS registry number, molecular weight, and toxicological data. These are the minimum data required for the Direct Source option and the Gaussian dispersion model in ALOHA. Data are available for the following properties: critical temperature, critical pressure, critical volume, freezing point, normal boiling point, vapour pressure, liquid density, gas density, heat of vaporization, heat of combustion, liquid heat capacity, and vapour heat capacity CITATION Bha15 \l 1033 (Bhattacharya &amp; Ganesh, 2015).

The significant goal of this research project is to investigate wax control modelling, capability of process simulators in handling dispersion models and to initiate dispersion control model development in process simulator, such model will in principle calculate for the concentration of chlorine gas released through accidental discharge. This project work starts with a detailed review of chlorine gas management, hazards and fundamental concepts in process industries. There is an extensive need to regulate and monitor the accidents arising through the use and unplanned discharge of chlorine gas. Hence, this study intends to use the development of a dispersion model using ALOHA software to solve this problem.

This research project involves majorly the utilization of ALOHA software, the following are the limitations resulting from ALOHA software CITATION Bha15 \l 1033 (Bhattacharya &amp; Ganesh, 2015);
Results have high uncertainty very close to the source.
ALOHA does not allow for one or more years of meteorological data to be input and processed so that statistical methods can be employed to determine the 50th percentile (median) or 95th percentile (unfavourable) concentration results.
ALOHA does not model for the initial momentum of the release of the toxic substance.
ALOHA does not account for the effects of fires or chemical reactions.
ALOHA does not account for terrain steering effects.
Dispersion effects associated with building wakes cannot be modeled by ALOHA.
The evaporation of chemical constituents in a mixture or solution cannot be modeled by ALOHA.
ALOHA limits predictions to one hour after the release begins or to distances up to ten kilometres (6 miles).
Processes that affect the dispersion of particles (such as deposition from Gravitational settling) cannot be modeled by ALOHA.

STRENGTH OF THE MODEL

The model provide an assessment of the threat zones using information that is commonly available to respond during an emergency. 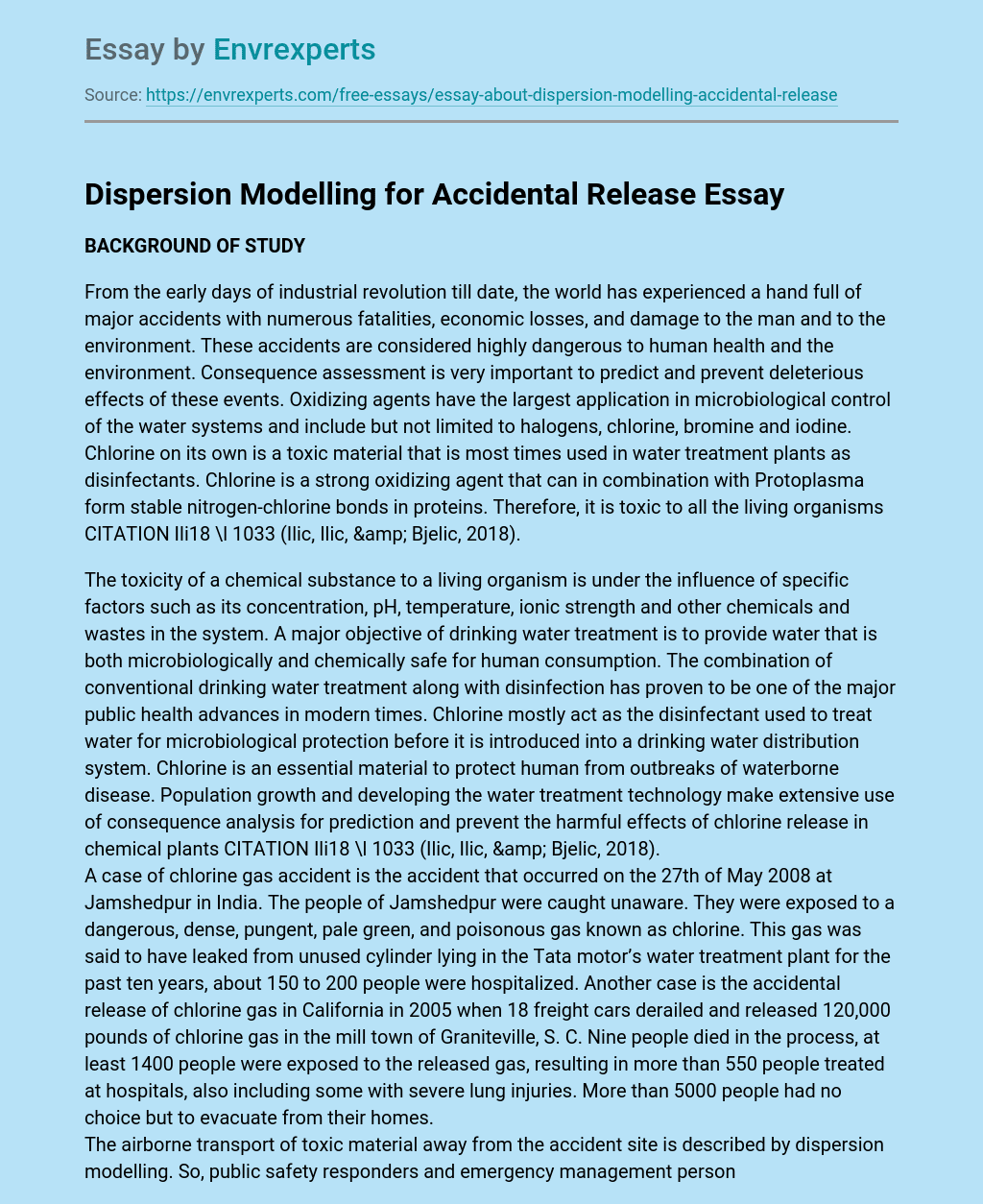