Oil has been a significant resource to humankind for many years. The number of uses for oil seems almost infinite. Ancient civilizations used it to waterproof boats and roofs and to light oil lamps. Today, it is used for so much more. Oil is currently used for transportation, heat, and manufacturing. Despite these many uses, oil poses dangerous and harmful disturbances to the environment. The United States should not increase domestic oil drilling because it negatively impacts the environment by releasing dangerous chemicals, affecting animals and their environments, and affecting humans.

Don’t waste time
Get a verified writer to help you with Domestic Oil Drilling and Environment
Hire writer
$35.80 for a 2-page paper

Increasing domestic oil drilling increases the likelihood of dangerous and harmful chemicals making their way to the places where we live and work. Most dangerous and harmful chemicals from domestic oil drilling are released into the environment through oil spills. Around 300 to 500 spills happen every year, which releases billions of gallons of oil. One fifth of oil that is in the ocean is released into the sea from ship operations, one fifth is released into the sea through exhaust rain, and one fifth is lost from accidents, spills, and leaks.

Spills are most common while being moved and at oil wells. Oil is moved through means like ships, trucks, trains, and pipelines. When oil spills on water, it spreads at a rate of half a football field per second. This rate is so fast, recovery takes decades, and oil that collects on water causes fires and explosions. Spills are the main source of harmful oil chemicals in the environment.

A common chemical released from oil is polycyclic aromatic hydrocarbons or PAH.

PAH is commonly in produced water, water which is a byproduct of oil extraction, which is tossed overboard and into the ocean. At high concentrations, this causes death to marine life, and at low concentrations, PAH causes birth defects, impaired growth, and skewed sex ratios. According to Jeff Short, a supervisory researcher for the U.S. National Oceanic and Atmospheric Administration (NOAA), an animal’s panicked immune system response to PAH causes animal cancer, especially if living near an oil platform or well. PAH, a common chemical released in oil drilling, is dangerous and deadly to animals. Hydraulic fracturing creates and uses chemicals which are hazardous. Hydraulic fracturing is a process of injecting liquid and materials at high pressure to create small fractures within rocks to release oil after the drilling has ended. These chemicals are potentially hazardous. Hydraulic fracturing wastewater contains dissolved chemicals and other contaminants which require treatment before disposal for safety reasons.

This treatment is challenging because of the amount of the water and the complexity of treating it, so it is often injected into deep wells like saltwater aquifers instead of being treated. This often causes earthquakes that are large enough to be felt and cause damage. Hydraulic fracturing is a hazardous procedure which releases dangerous chemicals into the environment. When working with hydraulic fracturing sites, workers are exposed to benzene, a “colorless gas which is toxic to the nervous system, liver, and kidneys at high concentrations”. Benzene interferes with the normal workings of cells and sometimes causes cancer.

According to a study by the National Institute for Occupational Safety and Health, or NIOSH, when working with hydraulic fracturing sites, some workers are routinely exposed to high levels of benzene. When NIOSH researchers measured the amount of airborne benzene that the workers were exposed to when they opened the tank hatches at well sites, fifteen out of seventeen samples were over the recommended benzene exposure limit for one shift. Benzene is a dangerous gas to which workers are exposed when working with hydraulic fracturing sites. In addition to releasing harmful chemicals, oil greatly harms underwater creatures. Oil is known to clog the blowholes of dolphins and whales, causing breathing and communication problems. Fish are negatively impacted the most by oil. If the amount of oil in the water habitat of fish gets too high, it often causes reduced growth, enlarged livers, changes in heart and respiration rates, fin erosion, and reproduction impairment. It also harmfully affects eggs and causes larva survival rates to drop. Oil binds to underwater creatures such as fish and sharks, which causes them to lose their potential to hunt for survival. When oil spills into the ocean, it affects the animals living in it by causing health and survival problems for the animals living under the water.

Domestic oil drilling also disconcerts the animals that or swim in or on the ocean. Oil gets in the feathers of birds that dive into or sit on the oily water, which diminishes the water repellence. This renders them unable to fly and unable to escape underwater predators. When they try to clean their feathers, they ingest the oil, which often causes sickness and even death. When migrating birds land on oil-contaminated waters, it coats their feathers and makes them unable to fly, which disrupts migratory patterns. When oil gets into the coats of furry mammals like otters and fur seals, it exposes them to the elements because it reduces their insulation. Even if these animals are able to avoid the direct effects of oil spills, the oil spills contaminate their food supply. If they eat fish or other animals that are exposed to the oil, they will be poisoned and die. The animals that swim in or on the ocean are also negatively impacted by domestic oil drilling, because it gets in their feathers and coats, and it contaminates the food they eat. Seismic waves, which are used to find oil reserves, greatly disturb animals in the ocean. These waves mainly disorient whales and dolphins, but other animals are also harmed.

According to Richard Charter, a government relations consultant for the Defenders of Wildlife Action Fund, when seismic waves are used near whales, it disorients them and causes mass beachings. Seismic signals also disrupt the communication, travelling, and hunting capabilities of dolphins and other marine animals. Seismic waves disorient and sometimes harm both marine fish and mammals that swim in the ocean. Offshore domestic oil drilling damages the ocean and the ocean floor. Hydraulic fracturing uses large amounts of water. This affects the availability of water and aquatic habitats. Ocean floor habitats like the Gulf of Mexico are great resources for oil drilling. Drilling in places like these will destroy the habitats and ecosystems in the region by releasing chemicals which harm them.

The water that hydraulic fracturing generates is bilge water with chemical by-products. The sea floor is harmed by elements from the trail of drilling rigs, underwater pipelines, searching ship channels, cuttings, and other debris from drilling. The ocean and ocean floor are greatly marred by domestic oil drilling. Domestic oil drilling also negatively affects the land environment. Well pads contribute to effects which mostly cannot be reversed through construction of well pads and construction of roads. These destroy picturesque views by stripping plant life, amplifying soil erosion, disturbing the earth’s surface, and spoiling animal habitats. Some of these effects even have additional and more severe effects. Soil erosion causes flooding or landslides. According to NASA, the glare of the oil and gas boom in the United States is so great that it can even be seen from space. The earth is severely impacted by domestic oil drilling.

Plants that support animals are also damaged by domestic oil drilling. The seismic disruptions that are used to locate oil wells disrupt the growth patterns of plants. In addition, the basic physical and operational structures needed for the operation of oil rigs cause drainage issues for the plants. Infrastructure of the oil rigs, especially road-building, causes the spreading of alkaline dust on topsoil and plants. This dulls plant development and health. Domestic oil drilling disrupts and kills plant life that support the environment and produce beauty. In addition to releasing dangerous chemicals and harming animals, domestic oil drilling harms humans by reducing the economic development of coastal communities and countries. Coastal communities depend on fishing and tourism for income. Oil pollution disrupts marine habitats and wildlife, which makes fishing and tourism less appealing. Noise pollution near fishing grounds drives away birds and decreases the amount of weedy plants. This also discourages tourists, because it changes these grounds to a less appealing and less natural place to fish. The economic development of coastal communities is highly crippled by domestic oil drilling. Domestic oil drilling also reduces the economic development of entire countries.

Tourism and outside recreation are often huge economic propellers for some countries. Oil tanks, network roads, and loud compressors devalue picturesque landscapes and reduce the income of the country. The economic development of a community or country is debilitated by domestic oil drilling. Domestic oil drilling is also a safety concern for humans. Oil contaminates the ocean and the animals within it. If humans catch and eat contaminated animals, they ingest dangerous chemicals from the oil remnants which are contaminating the animals. Also, oil rigs are dangerous places on which to work. Sinking rigs are a real concern, and fires or explosions are not uncommon. Contaminated food and oil rigs are some of the many dangers posed to humans through domestic oil drilling. An additional safety concern that hydraulic fracturing causes humans, is exposure to radiation.

Natural formations with oil contain naturally occurring radioactive materials (NORM). The most common NORM found in oil wells are uranium, thorium, radium, potassium-40, and lead-210/polonium-210. The radioactive wastes produced by hydraulic fracturing are classified as Technologically Enhanced Naturally Occurring Radioactive Material (TENORM). When oil is extracted, it concentrates TENORM and exposes these radioactive materials to the surface and human contact. The decay products of uranium and thorium, like radium, are sometimes dissolved in the brine, which is pumped to the surface as the oil in the formation is removed. The amount of TENORM found in an oil well depends on geological location, formation conditions, type of production operation, and age of the production well. Despite this, thirty percent of domestic oil wells produce TENORM, according to a 1988 publication. 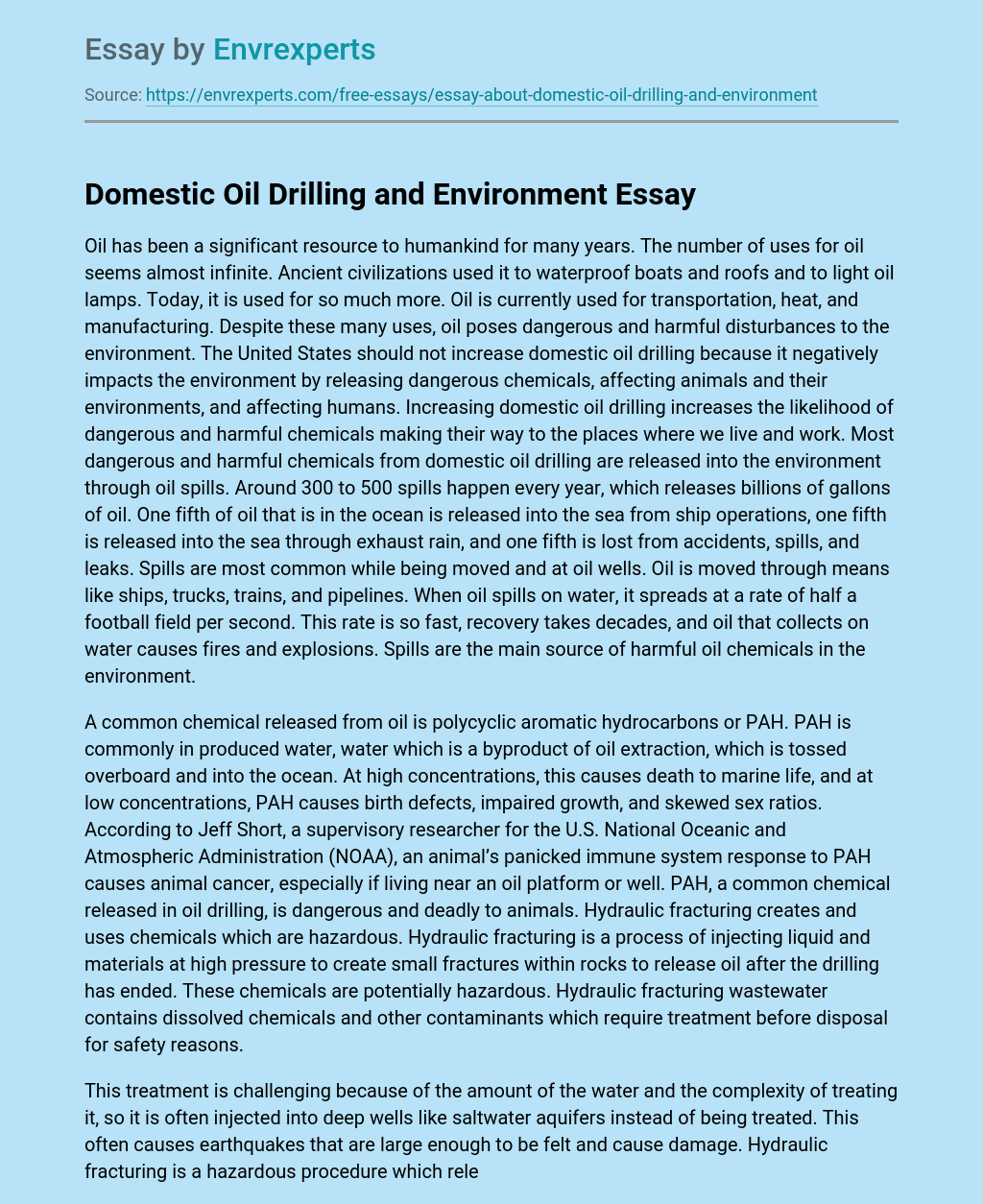