Ecological Disaster of The Caspian Sea

Don’t waste time
Get a verified writer to help you with Ecological Disaster of The Caspian Sea
Hire writer
$35.80 for a 2-page paper

The Caspian Sea is currently facing some dramatic steadily depleting of water level by seven centimeters per year. This continued declining would likely spell ecological disaster for the sea, especially for shelf areas that serve sanctuaries for Caspian fauna and flora. Gorgan Bay lies as small semi-enclosed water body set off from the main sea water at the southeastern corner of the Caspian Sea (Gharibreza, 2012).

The bay is best known for its high ecological importance as main part of Miankaleh wildlife refuge area (Kiabi et al. 1999). The bay is under a dramatic pressure from decreasing water level and its some areas (especially shallow western parts) draught out completely. However, biodiversity has recently become one of the hot issues in environmental monitoring in southern bCaspian asin.

Unfortunately information is still rare on the impact of sea level dropping gradients on the phytoplankton species in the Gorgan bay.

Few studies carried out on the phytoplankton diversity and abundance in southern Caspian Sea, such as Nasrollahzadeh Saravi et al. (2012) reported dominant phytoplankton species of the basin; Makhlough et al. (2011) reported some toxic species of phytoplankton from southern Caspian; Tahami and Pourgholam (2014) investigated species diversity of Bacillariophyta from the Iranian waters of Caspian Sea and Haghparast et al. (2014) described variation in phytoplankton community in warm-water aquaculture ponds from southeastern Caspian basin. The only comprehensive study on phytoplankton community structure of the Gorgan bay is that of Mazaheri Kouhanestani et al. (2019). This study carried out from March 2014 to February 2015. Based on annual reports of Iranian National Institute for Oceanography and Atmospheric Science (2019), shrinking bay area and algal blooms can led to high eutrophication in the bay. Authors believe that if declining water levels of the Caspian Sea would be continued, the bay could eventually dry up and become endorheic basin, a dead pool in the southeast Caspian Sea. So, authors believe that any study on the fauna and flora of the bay would provide greater insight into the bay dynamic. Due to sensitivity of phytoplankton to environmental changes, they are suitable to study ecological process of the bay. Considering the importance of phytoplanktonic approaches in aquatic ecosystem for the range of ecological services (Reynolds et al., 2002), the present study addresses seasonal distribution and diversity of phytoplankton in different areas of the Gorgan bay as an ecological indicator for assessing bay eutrophication states. The obtained results will help to assess and predict the ecological changes on the bay, and it well be a reference for further studies in similar areas in southern Caspian basin.

Ecological Disaster of The Caspian Sea. (2021, Oct 31). Retrieved from http://envrexperts.com/free-essays/essay-about-ecological-disaster-caspian-sea 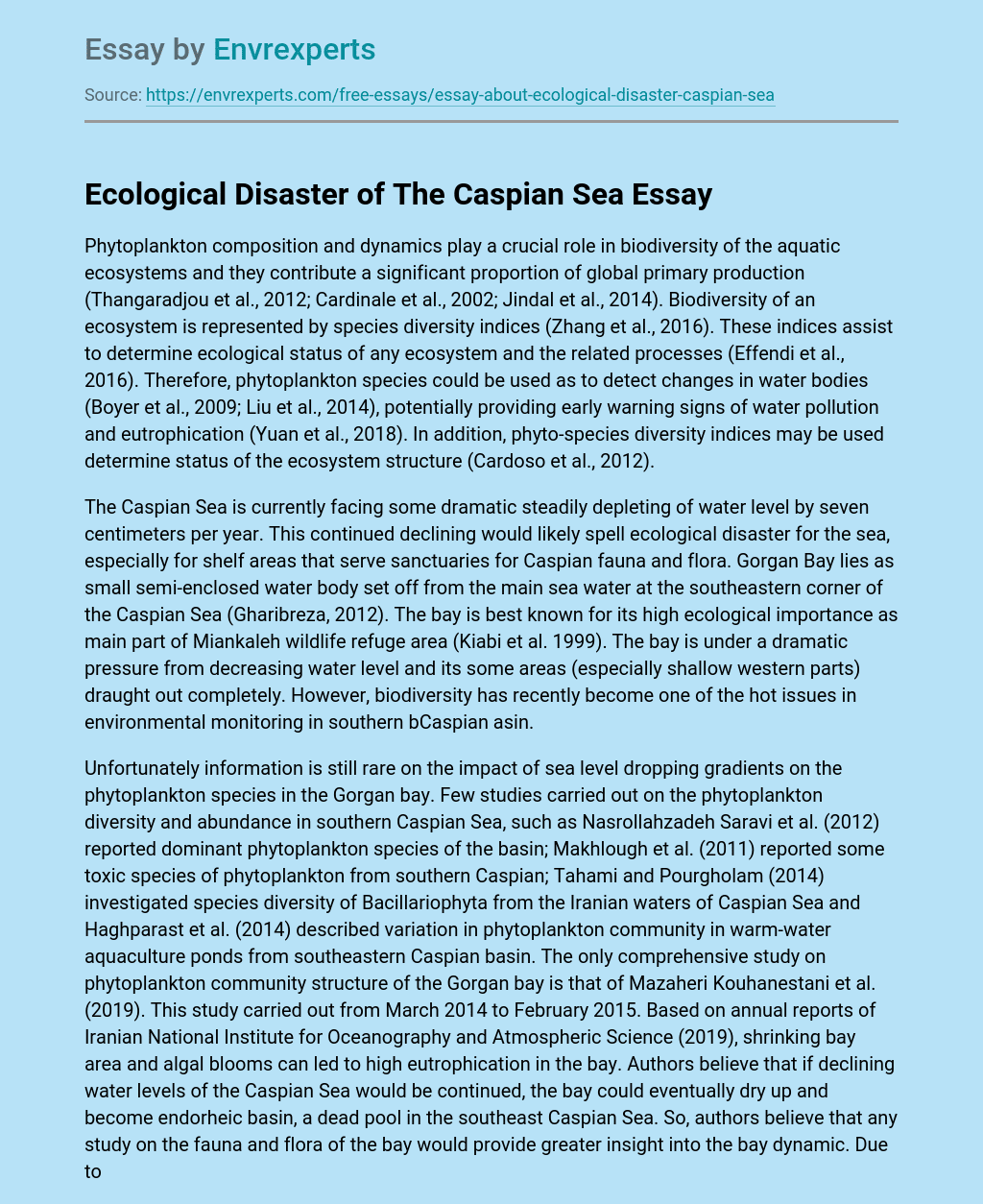