Freshwater Ecosystems are defined as having less than 1% salt concentration. Lakes, ponds, streams and wetlands make up almost one-tenth of Maine's surface area. There are more than 6,000 lakes and ponds and over 31, 000 miles of rivers and streams, making it of utmost importance to ecologists interested in preserving the fragile balance. Two specific freshwater ecosystems, Sebago Lake and Moosehead Lake will be discussed throughout the paper. Sebago Lake, located in Cumberland Country, is the deepest lake in Maine, measuring in at a depth of 101 feet (Sebago Lake).

Don’t waste time
Get a verified writer to help you with Ecological Management Proposal for Maine
Hire writer
$35.80 for a 2-page paper

Moosehead Lake, found in
Northwest Piscataquis, has the widest surface area of any other lake in Maine and even the Eastern U.S. (Moosehead Lake).

According to the State of Maine website, there are five freshwater ecosystems out of the 24 ecosystems found in Maine, for example, the Appalachia-Acadian RivershoreEcosystem, and the Lakeshore Ecosystem. The shorelines have nutrient-rich soil, which allows lush plant growth. There are approximately 190 species of aquatic plants in Maine, meaning submerged, floating or emergent (Freshwater Species and Ecosystems in Maine: An Overview).

As well as the obvious populations of vertebrates, there are algae and macro-invertebrates. Vertebrate organisms include lampreys, eels, herrings, trout, smelts,
sunfishes, perches, pikes, cods, sticklebacks, bowfins, turtles, and many others. There are 67 species of freshwater fish found in Maine, but because lakes are either cold water or warm water, they have adapted to be temperature-sensitive fish. Coldwater fish include Brook, Brown, and Lake Trout, Landlocked Salmon (as found in Sebago Lake), Arctic Charr Rainbow Smelt, and Lake and Round Whitefish.

Warmwater fish includes both Largemouth and Smallmouth Bass, Northern Pike, White and Yellow Perch, and Pumpkinseed and Redbreast Sunfish (Fish Identification). Macro-invertebrates include leeches, snails, dragonflies, water beetles, and earthworms (Freshwater Species and Ecosystems in Maine). All of these organisms contribute to maintain a well-balanced
ecosystem. Microbes are necessary for nitrogen fixation, and freshwater ecosystems house the necessary bacteria for this process. Taking all of this into account, the Representativeness rating is a 75.

The freshwater ecosystem is not rare in Maine, as stated previously, almost one-tenth of the state is made up of lakes, pods, streams, and wetlands. However, there are 19 species listed as threatened, 10 species listed as endangered and 45 species that are considered rare and are tracked by MDFW or MNA. Maine has two threatened mussel species, the yellow lampmussel and the tidewater mucket, as well as the Arctic Charr, the Atlantic Salmon, and the Shortnose Sturgeon, which has been on the federal Endangered list since 1967. The spotted turtle, Blanding's turtle, and the Eastern box turtle are also all
endangered. Their biggest threat is habitat fragmentation, and roadkill is their biggest cause of death (Freshwater Species and Ecosystems in Maine). This is because of their of their late age of first reproduction and high nest mortality. There are records of 27 rare aquatic plant species, although this is hard to verify as most watersheds have only documented one species (Freshwater Species and Ecosystems in Maine). More specifically, Sebago Lake is home to the rare plant called the Awlwort, which is a species of state concern (Sebago Lake) and the Atlantic Salmon, mentioned earlier. Many threatened or endangered species can be found in freshwater ecosystems, however there are only a handful found in the Sebago Lake, awarding the rarity of freshwater ecosystems a 60.

Over the past 30 years, there have been substantial improvements in the quality of Maine's lakes, rivers and streams. The freshwater ecosystems of Maine, as a whole, are threatened by the construction of dams. Dams can include anything from large hydroelectric dams to small beaver dams. Depending on size, dams can impact fish populations by reducing fish passage, reducing connectivity, fragment shoreline habitatareas, and ch ange sediment levels in water. However, there can also be positive impacts, such as recreational activities, power generation, and water supply (Management and Conservation of Freshwater Ecosystems). Land-use practices, and point-source pollution, are also threats to freshwater habitats, and can have multiple adverse effects, such as habitat fragmentation, changes in sediment quantity and quality, and reductions in amount of vegetation, which leads to changes in thermal and light regimes and destabilization of stream banks. Sebago Lake has suffered from watershed runoff due to intense logging and farming, which decreased water quality after 1990. The biggest threat would be the deterioration of its wetlands. The water level in the lake during the summer is very high, and the organic debris that accumulates in the lake's wetlands can no longer dry out and decompose. Instead, these harmful changes to the soil chemistry can cause
the release of polluting nitrogen and phosphorous into the lake (Wheeler 2009). The score for this aspect of criteria is a 75, as the ecosystem is rebounding from less than ideal water quality.

The Sebago Lake Watershed, measuring in at 171 square miles , is a small area for a reserve, but can easily be conserved. For this aspect alone, the Sebago Lake ecosystem was given a Size score of 85. Sebago Lake is a very unique ecosystem, already being named deepest lakin in Maine. It is also the second largest lake in Maine, and the third largest in New England. Sebago contains almost one trillion gallons of water, or 830,000 gallons for every person living in Maine. The lake's shorelines, if stretched out, would stretch from Kittery to August, or the length of the Maine Turnpike (Sebago Lake). This ecosystem is both
globally and locally valuable, as is every ecosystem, but more importantly locally, as the lake functions as a habitat, a drinking source, and a recreational site. This ecosystem would benefit the most from a protective management plan as opposed to restoration. There has not been a significant amount of damage to this lake, only the threat of future harm.

As of now, the Federal Energy Regulatory Commission is evaluating a 30-year management proposal for the Eel Weir Dam, Sebago's only outlet. Sappi Fine Paper, located in Westbrook, ME, owns this dam. This agreement was signed in 1986 and states that the water will be kept at historically high levels, which leads to an increase in erosion and destruction of beaches (Bragdon 2012). Ron Lovaglio, commissioner of the Maine Department of Conservation from 1995 to 2003 said, “There are those who want low levels to bring back the beaches, marinas want high water levels, the Portland Water District want clear water and Sappi Fine Paper has some historic rights to the water for energy generation. So there is definitely some conflict there (Bragdon).”

Under this proposed Management Plan, there will only be a change in outflow if the lake's water levels get very high or very low. The Portland Water District supports this plan because there is no evidence that it will negatively impact lake water quality, as well as releasing more oxygen-rich water to the Presumpscot River during the summer. Leopold's "all species have equal value" model fits in well here, as all organisms in the ecosystem represent an integral part in maintaining homeostasis. For this particular ecosystem, I think a conservationist approach is fitting. It is
entirely plausible for an ecosystem to flourish as well as function as a drinking water source for 200,000 people and be a place of recreation. As for who should foot the bill of protecting Sebago, I would like the government to step up and take responsibility.

Realistically, the money should come from the taxpayers who live within the county of Sebago Lake, or within the area supplied with drinking water from Sebago. Based on the above charts, the White National Forest Ecosystem has been ranked as the highest priority conservation issue of the state. However, there are many factors that play into making this decision. Three people chose their scores based on personal opinion of the research they found. In order to be done objectively, one person must decide all scores based on a pre-set rubric to ensure fairness. 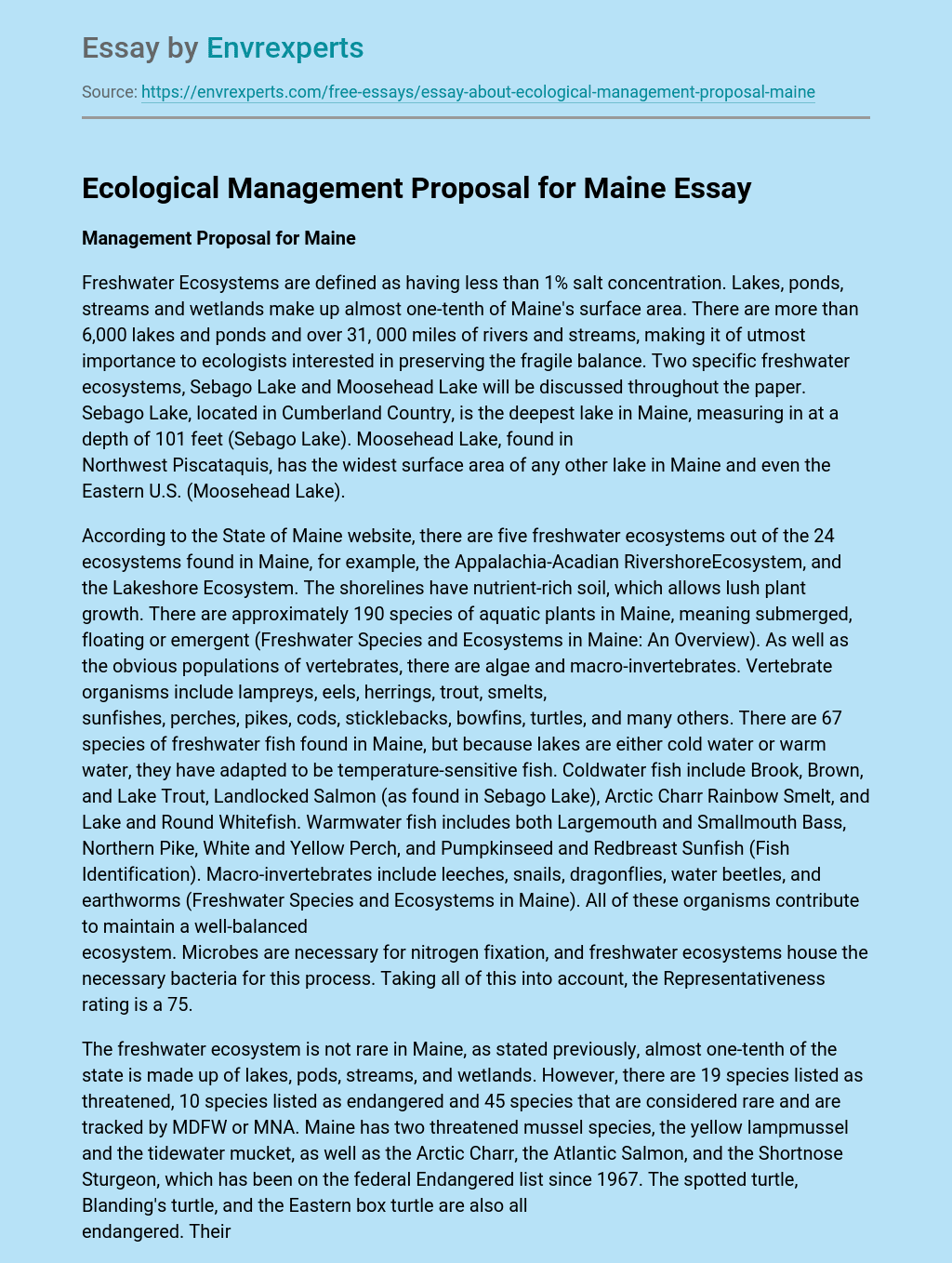