We are currently living in a time where our planet as we know it is at stake. We are fighting against a ticking clock in a world where climate change is a reality that is endangering not only our valuable natural resources but global civilizations all over the world. The threat of global warming appears worse than ever and it is evident that this is traceable to human-caused carbon emissions. Our current situation is calling out for a solution that will allow for the prosperity of future generations.

Don’t waste time
Get a verified writer to help you with Economic vs Environmental Protection
Hire writer
$35.80 for a 2-page paper

Power plants today are the largest source of U.S CO2 emissions, which are contributing to the rise of global temperatures and sea levels, changing weather and precipitation patterns and in turn affecting ecosystems and communities. It is clear that society should seek to limit CO2 emissions by power plants since they pose numerous environmental consequences in creating long-lasting climatic changes that are currently affecting millions of people and risk future catastrophic climatic events.

The carbon-pollution associated with power plants threatens American health and welfare and should, therefore, be limited. However, with a heavy reliance on natural gas, we must become aware of the inadequate regulations placed upon the practice of fracking in relation to human safety, as its almost unsupervised and unregulated growth is posing major health hazards to communities all over the U.S.

After WWII, there was a wave of industrialization that brought with it an increase in the use of fossil fuels. Growing concerns on the environmental externalities brought upon from unregulated activity by new industries led to the passage of the National Environmental Policy Act of 1969, which called upon the government to play an active role in environmental protection.

EPA, or The Environmental Protection Act was then established to coordinate and regulate these efforts. Since then regulations and laws with the purpose of 'placing numerous restrictions on industrial and commercial activities that might result in the pollution, degradation, and contamination of land, air, water, food, and the workplace' ( Easton, 158) have been passed. Despite these acts, carbon emissions are driving up climatic change at an alarming rate and with power plants being the largest single source of U.S carbon emission representing 40% of the total.

Act after act has been passed but our environment is crying out for a revolutionary solution that will, in fact, bring changes to our current situation. In the face of current environmental circumstances the EPA, in an effort to limit carbon emissions from fossil-fueled power plants, passed the Clean Power Plan. Adopted in 2015, this plan set carbon pollution standards for existing power plants, with a projection to reduce carbon emissions from the electricity sector by an estimated 32% below 2005 levels by 2030. While the EPA's efforts are the first time in history where power plant emissions have been regulated, its framework is not ambitious enough to reach the results desired. It is imperial and urgent to take further steps in order to reduce the climatic consequences brought upon CO2.

The urgency to reduce CO2 emissions is evident in the climatic change that is upon us that has been caused by human environmental manipulation. The growth of the global economy since the 1860s has relied heavily on fossil fuel consumption. According to representatives of ALSTOM power, an international supplier of power generation that concerns for the environment, humans have collectively released approximately '950 billion tons of carbon dioxide from the burning of oil, coal and natural gas. These fossil fuel emissions have been increasing at an average rate of 2% a year to a 1997 annual global output of around 23 billion tons of carbon dioxide ' The retention of some of these gases in our atmosphere have contributed to the rise of 1º C of the global average temperatures. Scientists argue that in order to stabilize these rising concentrations and temperatures, reduction in CO2 emissions of even 60-80% may be required. During the year 2012, U.S heat-trapping emissions reached an alarming 82% of CO2, a third of it (32%) coming from electricity generation. A failure to reduce these emissions will increase the risks of serious repercussions caused by the 'accelerating sea level rise, storm surges, heat waves, wildfires, droughts, and increased hurricane intensity.' (Richardson, 248). It is crucial for us to tackle this issue and attempt to reduce the accumulation carbon dioxide in our planet's atmosphere since not only it is in our best future interest but it is an event we are collectively responsible for.

The risks of catastrophic climate outcomes as well as the growing impact that is evident in the U.S. also contributes to the urgency to limit CO2 emissions. According to the Global Humanitarian Forum's 'Human Impact Report: Climate Change–The Anatomy of a Silent Crisis' (May 29, 2009) global warming is already affecting over 300 million people and is responsible for 300,000 deaths per year. People living in the US are already starting to be exposed to climate change impacts that vary in severity. Some face the risk of tremendous flooding as the global sea level rise is increasing at a much faster pace. On the other hand, higher temperatures seen as an effect of greenhouse gas atmosphere retention have increased evaporation and plant transpiration and has increased the threat of drought in certain regions. These extreme events that lead to an excess or scarcity of water, has and will have tremendous costs. The current threat will transform communities not only in the U.S but all around the globe. Therefore, making a significant reduction in US existing power plant emissions in the next decades to come can help reduce risks of negative consequences from climate change in the US and the world.

We have thus established the clear necessity to reduce our carbon-emissions derived from mainly power plants. The question then shifts in another direction, as we turn to the industry of fracking. Having turned away from other pollutants, we have started to heavily rely on natural gas for energy generation and while it has proved to be a cleaner energy source, the practice of fracking is not adequately regulated for public safety. It is true that the conversion of coal to natural gas has put America a step closer in reducing our greenhouse gas emission more than any other industrialized nation, however, there has been recent evidence of its possible health hazards and even environmental detriments. Fracking involves blasting chemicals, sand, and water into bedrock through horizontal drilling in order to create a fracture in the rock and allow for the extraction of natural gas. Disposal of these chemicals has become an industrial dilemma as business refuses to admit the real consequences that this practice is having on nearby communities.

The issue with fracking comes from the fact that a majority of industries and corporations are not being completely transparent in their practice and many government officials are failing to regulate it since monetary interests are involved. There has been an uncovering of adverse health effects that have had serious consequences on communities near drilling wells that have caught the attention of many and call for, not a ban, but a more restricted and regulated fracking industry. In his article 'The Truth About Fracking', Chris Mooney exemplifies these issues as he states that there hasn't been a great deal of research into the safety and side-effects of fracking, and it might be possible that the problem lies in the careless of well-drilling and waste disposal. The concern then lies in the regulation of the environmental impacts of fracking as well as the disposal of water, chemicals, and drilling wastes.

Currently, the only new fracking regulations from the EPA, addressing air pollution are not as restrictive as they should be. In their book, 'The Real Costs of Fracking: How America's Shale Gas Boom Is Threatening Our Families, Pets, And Food', Bamberger and Oswald, the first researchers to document ill health in communities near fracking drill sites, exemplify some of the major concerns associated with this practice. First off, many of the fracking chemicals used to extract natural gas are known carcinogens and endocrine disruptors. Their studies during the ongoing fracking boom uncovered 'serious adverse effects including respiratory, reproductive, and growth-related problems in animals and a spectrum symptoms in humans they termed ‘shale gas syndrome'' The harmful chemicals in fracking also include the release of methane. Across the country, there have been instances of disastrous spills of wastewater into rivers and illegal dumping into aquifers which poses the risk of the water table being tainted. One recent study carried out by Stephen G. Osborn found amounts of methane in drinking water supplies so high in natural gas as to pose 'a potential explosion hazard'. Not only does this release of methane potentially contaminate drinking water, but its release into the atmosphere contributes even more to global warming. There are now more than 1 million active oil and gas wells in the country, and their growth and adverse effects are calling for regulations. In all these areas, there has been clear evidence of community members with cancer and neurological disorder and other adverse effects that are caused by long exposure to chemical leaks. This is an entirely preventable health and environmental crisis that is being ignored by those in power.

An exemplary case is that of Vernal, Utah presented in the book Taking Sides. Here the struggle is apparent between profit and economy over environmental health hazards protection. Vernal's state's legislature, so deeply entrenched in the oil and gas industry will not accept the reality and will protect the business at any cost. There appeared to be extraordinary levels of wintertime pollution plaguing the area since the undertaking to frack the region, which filled the air with toxins and carcinogenic gases. Pregnant women were deeply affected and babies began dying in the area and the state legislature failed to assess the situation. The impacts of the unregulated fracking industry are not regional but local and it appears as if the government has abandoned their communities picking business over welfare. However, a call for a ban on fracking is not needed, what people are requesting is that politicians ensure that the practice is done responsibly through the enforcement of tighter regulations. Currently, fracking is exempt from the Clean Air Act, The Clean Water Act and The Safe Drinking Water Act as a consequence of an exemption passed into the 2005 Clean Energy Act, called the Halliburton Loophole. Thus potentials spills, explosions, leaks in calves, off-gassing, harmful air emissions, truck traffic and massive deforestation continue to be part of the industrialization of shale gas production that is not regulated and in turn is a concerning health hazard.

If we fail to address these issues soon as a society, the repercussions will be visible in the future. While the economic and political systems we may have in place now may benefit our market economy and a drastic change might affect these systems, we must think of the collective future and the greater good of the global community. Our practices now are only temporary and their environmental consequences will eventually not only lead to their own demise but to humanity's as well. It is, therefore, necessary to take action now and urgently reduce power plant CO2 emissions, while also assuring that the new methods used such as fracking of natural gas are well regulated so as to not cause more environmental and social repercussions in our society's health and welfare. 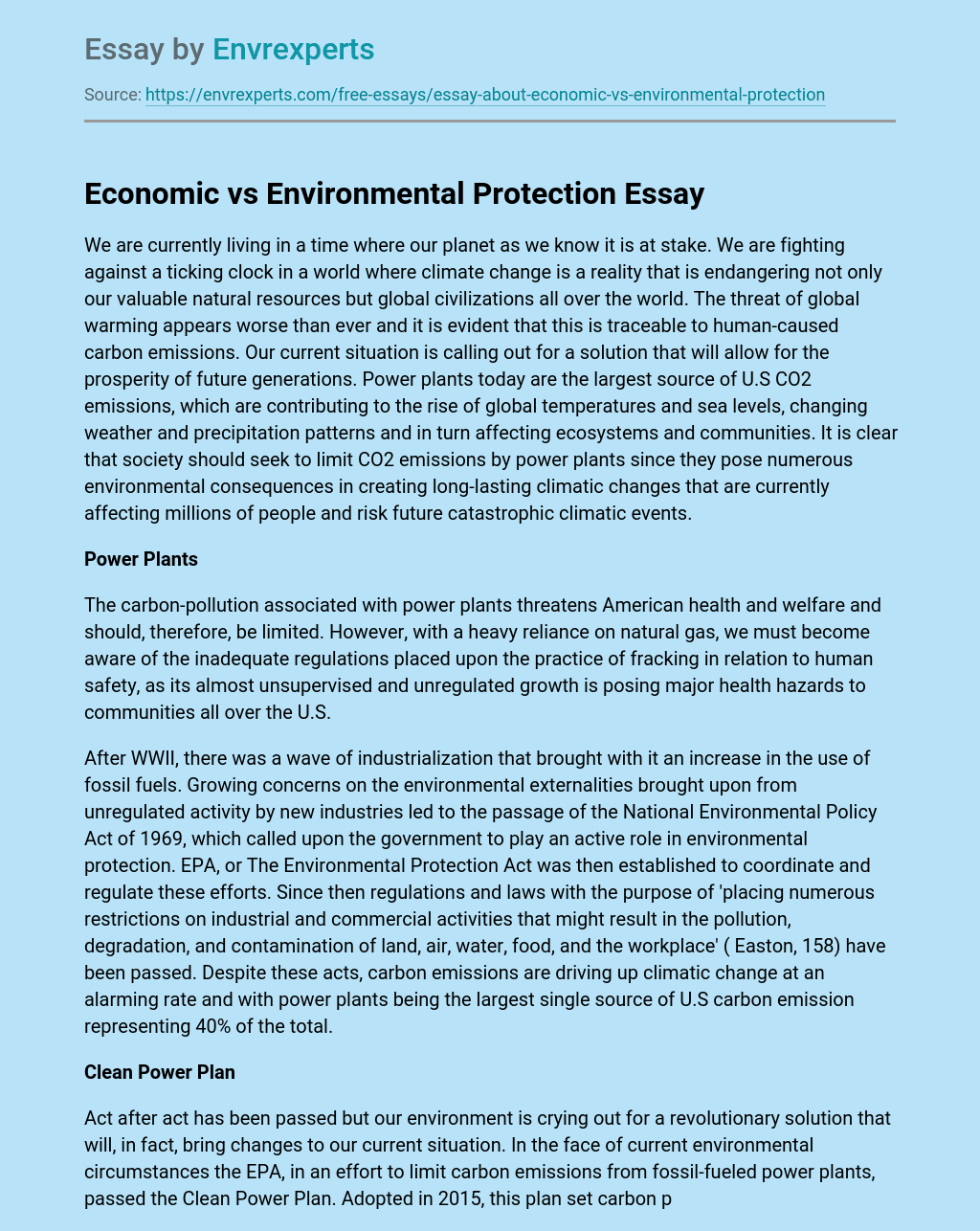