Effect of Climate Change on Canada

The United Nations Framework Convention on Climate Change (UNFCCC) and the scientific community recognizes that climate change is threat to agriculture and all aspects of food systems such as crop and animal production, food processing, fish stocks and trade are vulnerable. Food system activities are directly dependent upon and inherently interconnected to climate and weather. The effects of climate change are already being felt globally and Canada is not immune to the impacts of climate change on its agricultural sector with respect to the production of safe, high quality food and maintaining a constant supply.

Don’t waste time
Get a verified writer to help you with Effect of Climate Change on Canada
Hire writer
$35.80 for a 2-page paper

According to the Government of Ontario, Poverty Reduction Strategy Office of Ontario (2017), Ontarians benefit from one of the world’s best food system and enjoy the low cost associated with high quality, safe and nutritious foods. Economically, the agricultural and food sector accounts for $49 billion to Cana’s gross domestic product (GDP), $15.3 billion in Ontario and supports more than 790,000 jobs in the Province. While Ontarians generally enjoy quality food, 12% of Ontarians are affected by food insecurity (GoO, 2017).

Food insecurity in Canada and the globe will soon be a major challenge as a result of climate change because it will affect the availability, access, quality and safety of food systems due to increased demands and decreased production. This essay will discuss diverse way in which climate change affects food systems because agricultural processes are inherently nature based. The author acknowledges that the impacts of climate change will present food producers with opportunities and risks, however, for this short essay, the impacts of climate change on agricultural crop yields, the loss of crops due to an increase in pests and diseases and influence of extreme events on global trade, food transport and food prices will be discusses covering availability, access, utilization and stability which is the basics of food systems in the built environment.

Effect of Climate Change on Canada. (2021, Oct 31). Retrieved from http://envrexperts.com/free-essays/essay-about-effect-climate-change-canada 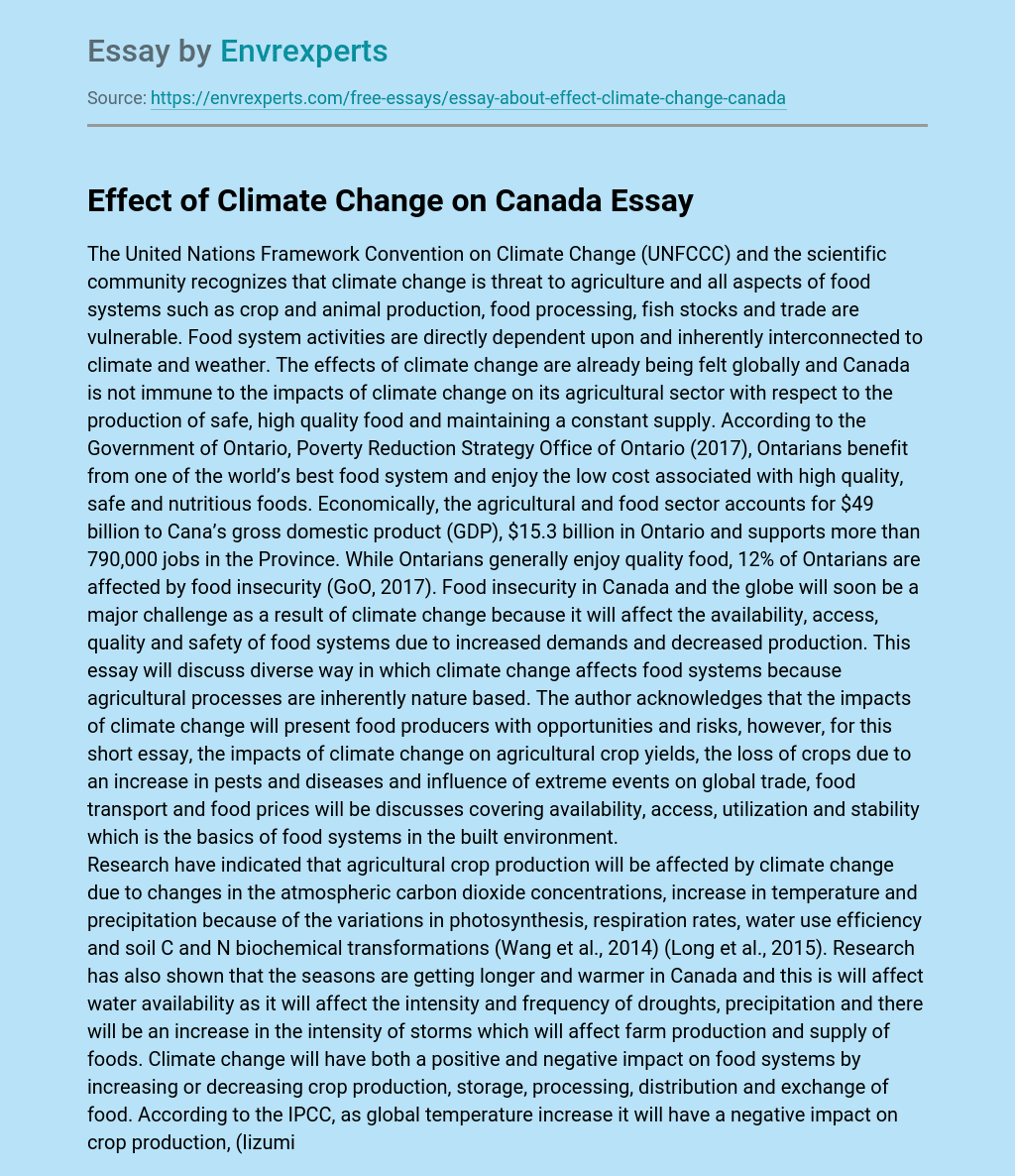