Effect of Covid-19 on Human Activity and Environment

2020 has welcomed one of the worse pandemics, COVID-19, and its caused widespread changes around the world from the way people greet each other to plummeting oil & gasoline prices internationally. The coronavirus is in the process of making humans actively re-evaluate the way we live and conduct our lives. The change in human behavior as a result of this pandemic has had profound effects on several environmental factors. These environmental factors differ but some examples are its effect on fossil fuels, pollution, wildlife, and fewer density issues.

Don’t waste time
Get a verified writer to help you with Effect of Covid-19 on Human Activity and Environment
Hire writer
$35.80 for a 2-page paper

The virus is making every one devise new plans like companies have workers work from home or students doing online courses to move forward but profound this change has already occurred so it’s unlikely things will ever be the same again. For example, a corporation leases out a big building for its employees to work out of. Now with the virus all its workforce is home and they are receiving the same/similar results from the workforce why would they need that building? This is just one example of how Covid-19 is effecting human activity and the environment.

To begin to understand the coronavirus effects on the environment these issues must be separately analyzed. One major change that this has caused is the plummeting of gasoline/oil prices around the world. People see this every day whenever they go to get gas whenever they have to leave their home now and the prices are so low. The coronavirus pandemic has played a major role in the collapse of oil prices because people aren’t traveling as much.

It’s not as simple as that but it’s undeniable the stay-at-home orders have played a tremendous role in the collapse of the market (Gladstone, 2020). “No one imagined a crisis of this scope. This was in no scenario,” claimed Daniel Yergin, who’s an expert on global energy. He’s also the vice-chairman of IHS Markit, a research firm (Gladstone, 2020). As well-cited, this was not seen as a possibility within the fossil fuel industry and they were not prepared. This could lead the pathway for global investments into alternative energies to power an economic recovery from this pandemic while also combatting climate change.
For the first time, in the U.S., oil prices fell below zero and it is threatening harsh economic repercussions. “The idea that we are energy dominant or independent is a fallacy,” said Jason Bordoff, a professor at Columbia University’s School of International and Public Affairs and founding director of its Center on Global Energy Policy (Gladstone, 2020). The co-dependency created through these fossil fuels becomes abundantly clear in times like this because the U.S. cannot be completely energy reliant without Saudi Arabia or Russia. The global oil market’s effect on the United States has revealed that when oil prices rise, Americans feel the pain, and when oil prices collapse, the U.S. needs to call for help (Gladstone, 2020).
According to the International Renewable Energy Agency (IREA) accelerations in investments into alternative energies could generate massive amounts of revenue globally that could help relieve some of the economic burden created by the coronavirus. The reports claim that the global GDP by one hundred trillion dollars between 2020 and 2050 (Ambrose, 2020). The global crisis has highlighted the major issues that exist within the fossil fuel industry like the damage it does to our global environmental standing. The effects of less-cars on the road can be seen in the ozone layer already so investing in alternative energies now seems like the best track to move forward properly addressing global issues.
The IREA’s director-general, Francesco La Camera, also weighed in on this issue stating “the deep vulnerabilities of the current system” have been exposed by this virus. He was adamant that kickstarting economic growth should be down through investments into alternative energies because it’s would address climate change as well (Ambrose, 2020). The agency’s report found that kickstarting these investments into alternative/renewable energies would address the climate issue and would pay for itself. These investments into these renewable energies would boost the global GDP by $98 trillion. This is above the “business-as-usual” scenario and by 2050 these investments would be returning, roughly, between $3 and $8 on every dollar (Ambrose, 2020).
The effects on the fossil fuel industry are a direct result of less travel because of the pandemic. Across the globe, people are staying at home and this is having a direct effect, a positive one, on the environment in many ways. For example, images were taken in northern Italy and they’ve displayed a significant drop in pollutants in the ozone layer. Specifically, they showed drops in concentrations of nitrogen dioxide which is directly a result of less-traffic, and drop-off in other fossil fuel-run things like heating units (CBC News, 2020).

Effect of Covid-19 on Human Activity and Environment. (2021, Oct 31). Retrieved from http://envrexperts.com/free-essays/essay-about-effect-covid-19-human-activity-and-environment 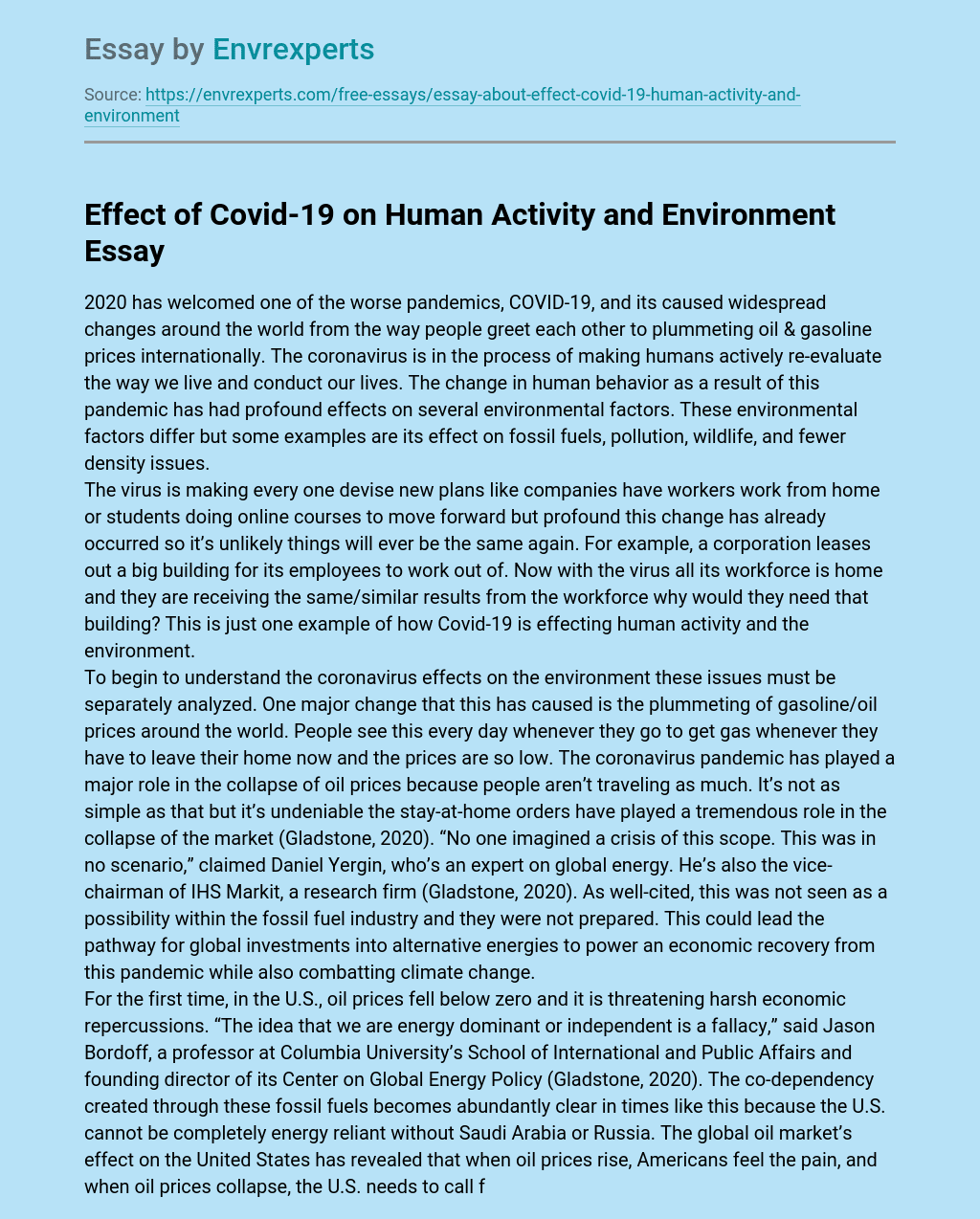