Effect of CRISPR on Today Society

Plants and crops are risky towards pests and pathogen, bacteria, fungi and insects which will affect its healthiness and life expectancy. Plants and crops without any protection against these threats are easily infected with disease cause by pests and microorganisms. According to a research, the worldwide crop production loss in about an average of 26% annually because of pre-harvest pest and pathogen.
In the older days, without the presence of genetic resistance in agriculture, the production of foods depends on the chemical control of pathogens.

Don’t waste time
Get a verified writer to help you with Effect of CRISPR on Today Society
Hire writer
$35.80 for a 2-page paper

Regardless of the effectiveness of using chemical control towards plants protection it produce a bad side effect to the environment. There is alternative way to protect the crops and at the same time protect the environment which is by using modern synthetic chemical. However, it can be used in advanced agricultural production system and the cost is very high [32].
In the pre-genomic years, a breeding programs were focused on the natural identification and induced mutant alleles for resistance and its combination into genotypes through breeding techniques.

The method of mutation breeding showed positive result where the disease resistance was improved and this method was used to produce more new crop varieties at the mean time. Throughout this method, numerous of mutant have been developed through the induction of mutant and plants show its enhanced resistance towards disease.
Genetic engineering techniques are commonly applied in fruit cultivations, as they enhance essential agricultural characteristics such as the resistance to biotic and abiotic stresses and fruit quality. Recombinant DNA technology allows for the transition of the target genes to fruit cropping from any organism, plant or microorganism, and provides new genotypes and breeding-based phenotypes with improved possibilities for fruit yield.

In results, it will boost the consistency of the fruit and increase shelf life. The recombinant DNA technology produced organism which called genetically modified organism (GM). The change it DNA caused its maturation to be slowed down and stopped its softening after picking. Nonetheless, regulatory approval processes mainly affect the production of new GM crops as the main purpose of the approval program is to avoid harm to human health and the environment and avoid financial losses [33]. This may result in very high costs for approving new GM crops and could also slow marketing of goods under regulatory requirements. Therefore, the CRISPR-technology, clustered frequently interspersed is a safer option.

The CRISPR system is an innovative adaptive immune mechanism for protection against invasion by bacterial and exogenous plasmids, found in bacteria and Archaea [34]. Since the CRISPR-Cas method was designed to successfully alter plant genomes in 2013, several attempts have been made to make it a better tool. Gene editing is commonly used in plant breeding for the development of transgenic plants for implementation of new resistance genes to crop pests and diseases.

Biotic stress involves viruses, bacteria, fungi and insects which may attack and infect plants [35]. CRISPR-Cas9 technology has been employed to obtain disease-resistant plants [36]. CRISPR-Cas9 has also been used against viral, fungal and bacterial infections that contribute to significant tomato losses. For fighting viruses infection 2 strategy been used which are designing sgRNAs and targeting the virus genome directly through sequence complementation and modification of tomato genes confering antiviral properties. The CRISPRCas9 program was used for growing viable virus resistant plants over many generations. This technology was also used to eliminate main genes involved in systems of resistance, in order to verify if these genes may grant virus immunity.
In the absence of adequate agricultural chemicals, unidentifiable asymptomatic infections can make plant pathogens difficult to manage and the use of genetic resistance against these pathogens the most successful technique [37]. Pseudomonas syringae is the source of the bacterial spot disease, reducing their production and marketability in tomato plants. Since (JAZ2) aids defence, CRISPR-Cas9 researchers have used to produce JAZ2 dominant tomatoes.
Banana streak virus is a big problem in banana growing in tropical and subtropical countries. Therefore, CRISPR-Cas9 focuses on their genomes, one technique for enhancing the resistance to viruses

Dryness, floods and heat and cold, especially those in the sense of climate change, present a significant risk for organisms, mostly plants. Conventional breeding strategies have greatly improved crop yield but new methods are required to further boost crop productivity as food demand is increasing. And CRISPRCas9 is the most viable technology [38]. Since tomato is a cold-sensitive crop, the quality of its fruit is easily spoilt by cold stress. Li et al. discovered that C-repeat binding factor 1 (CBF1) can prevent plants from cold injury, as the cbf mutant produced by CRISPR-Cas9 shown More extreme signs of freezing and more electrolyte leakage. MAPK3, which participates in resistance against gray mold disease also contributed in tomato drought response by providing protective cell membranes from oxidative damage [39]. The inactivation of endogenous banana streak virus was carried out by Tripathi et al. using CRISPR-Cas9 system and compared to the un-edited control, 75% of the edited plants remained asymptomatic [39].
Since the first implementation, CRISPR-Cas9 has revolutionized seed breeding the main achievements were the development of fruit crops which resist disease and adapt to the environment besides improving fruit quality.
Even so, the rise in CRISPR-edited plants faces socio-political challenges, including public acceptance and government regulation. More countries may wish to promote a constructive and inclusive attitude towards CRISPR-edited crops by more advances in CRISPR technology and developing an evaluation framework.

Balance of advantages and losses.

One critical science ethics concern is that advantages must outweigh losses. Risks must be given greater consideration because they can affect human organisms or the environment. The use of the CRISPR / Cas9 technique includes risks as it can produce harmful target mutations. One issue is that large genomes may contain several similar or extremely homologous DNA sequences to the desired target DNA sequence. CRISPR / Cas9 can also distinguish certain unintentional sequences which can result in cell death or transformation by triggering mutations Attempts to reduce off target mutations have been made however further progress is required especially for accurate changes to therapeutic interventions. The effective safe supply of CRISPR-Cas9 to cell types or tissues that are difficult to transfect and invade is another significant challenge.

When conducting experiments using CRISPR / Cas9-based RNA-guided genetic drives, details must be studied keeping the target results into account. Given the genetic drive still operates in produced organisms, mutations from goals are likely to occur and each generation will be increased. If there is a chance that genes will be passed to other animals, there is a danger that changed genomes will be transmitted to similar bodies through political borders. It may be hard to monitor the dispersion of the gene drive characteristic. In fact, the extinction of the entire population controlled by gene drive may have drastic impacts on the balance of the ecosystem. For example other plague can grow. Scientists warned of the dangers of unintentional release of genetically engineered laboratory species in the environment [40]. Safety precaution is a must to prevent the spread of organism that can cause ecological damage and affect human health.

The CRISPR / Cas9 technique's success in producing specific genetic modifications makes it more difficult to classify a genetically modified organism and control it on the market. Regulatory agencies like the US Food and Drug Administration should authorize for customers every genetically modified organism, but it is not simple how to cope with an expanding CRISPR / Cas9 in industry possibly. The regulation of patenting is another matter. A lot of business interests are involved. , transgenic species have been patented for agricultural use. Besides, human gene sequences for medicinal use have also been patented this has contributed to tremendous advancement of biotechnology. However, lawsuits can emerge from the practice of patenting. Biotechnological firms have also encountered confusion and conflict over the patenting of CRISPR / Cas9 for medicinal use in humans.

The potential for non-therapeutic treatments using gene editing is another legal concern to be addressed. For health purposes, the use in germ line is banned. Nevertheless, the flexibility of the CRISPR / Cas9 therapies helps somatic cells to interact and fit evolution with our interest in life. Most phenotypic characteristics have a genetic aspect that can be influenced in addition to the environment. This technique be used to enhance athlete performance or discourage or reduce the violence of athletes. Generally speaking, gene therapy seeks to enhance the health of a individual, although it may happen where the criminal justice system will require gene editing for serial offenders or dangerous unsafe perpetrators due to the abuse. Socially, there would be a question if people or persons, for example in their intellectual capacity, will be improved physically relative to others.
Many have advocated for a national debate, but other important issues must still be addressed with respect to this method on the financial, ethical and legal implications of genome-editing technologies in human germline. In addition to humans plants, animals and environment, the use of CRISPR / cas9 renews many other societal and ethical concerns such as taking into account the anti-malignancy concept in risk assessment, health issues to prevent biological damage, or the application of this technique to develop genetics.

Effect of CRISPR on Today Society. (2021, Oct 31). Retrieved from http://envrexperts.com/free-essays/essay-about-effect-crispr-today-society 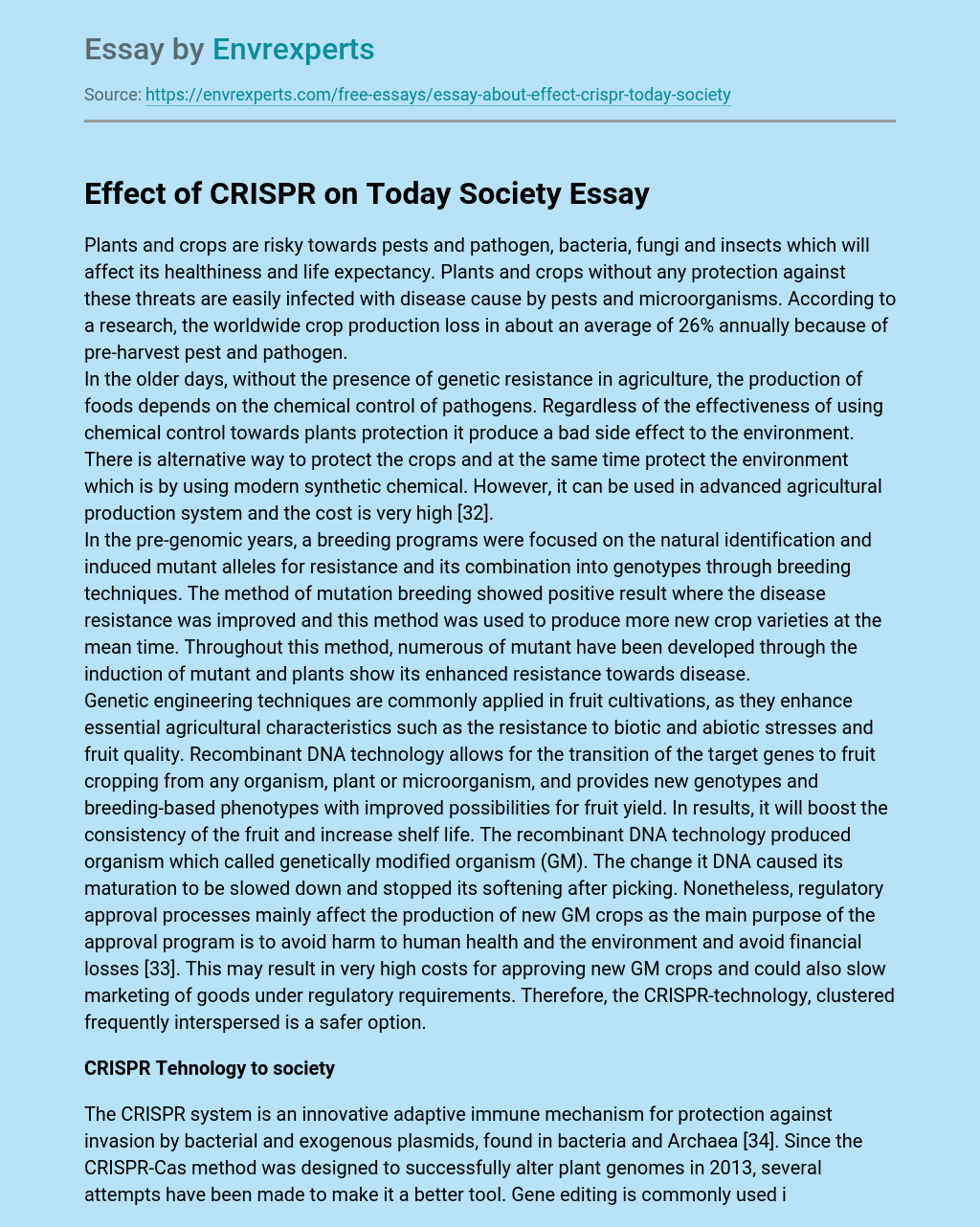