The Effect of Different Stimuli on Isopod Behavior

Generally, the foundation of ethology, which is the study of animal behavior, is the understanding that behavior of animals derives from what is known at modal action patters, or more commonly known as MAP. MAP was introduced to simplify the concept of fixed action patterns (FAP) in the field of ecology. This concept explains the variability among individual animals when preforming a particular sequence of action patterns, also known as an instinctive behaviors. It means that MAP consists of a main adaptive stereotyped pattern resulting from a species-characteristic stable mechanisms and minor nonadaptive variant patterns resulting from individual-characteristic genetic variation.

Don’t waste time
Get a verified writer to help you with The Effect of Different Stimuli on Isopod Behavior
Hire writer
$35.80 for a 2-page paper

However, there were exceptions to this observed phenomenon. For example, these individuals performed variant patterns that implied autonomous behavior not deriving from innate genetic variation. Therefore, I conducted this research study to observe animal behavior in isopods and their responses to different environmental stimuli. Hence, when isopods are exposed to neutral and acidic conditions, they will prefer to stay in the acidic environment because they have adapted to living in slightly acidic environments.

Isopods, or pill bugs, were naturally found in areas where there were sufficient amounts of moisture, food availability, hiding spots, and where soil was slightly acidic. Pill bugs need to live in slightly acidic moist environments because they have gills and without moisture, they would dry out. Also, according to Red Planet Inc., the outer shell of a pill bug is not waxy as it should be to prevent desiccation. Should a pill bug be moved from its home underneath a log and into a drier region, the pill bug will immediately begin looking for an acidic moist environment and more specifically, a log like that of its home.

Pill bugs can find suitable living conditions (dark, acidic, moist places) by using their gills to determine the areas that are easier for them to breath in. Pill bugs also use their sensory antennas when orienting to help feel their way around to their destination. Although pill bugs do develop eyes at adulthood, younger pill bugs must rely on their antennas. One of the most common problems that arise when working with pill bugs is that they tend to curl up upon touch of external stimuli. Therefore, they had to remain uninterrupted when I performed the experiment.

I chose the different conditions within the chambers as the independent variables, or manipulated variables. The proximate causes of orientation could be temperature, or humidity in particular for pill bugs, neuronal changes, and even changes in season. Since environmental conditions are essential to their well-being, each chamber had a different condition: neutral moist environment and slightly acidic moist environment. Furthermore, pill bugs have survived many centuries by being able to orient themselves towards acidic moist environments. Hence, orientation occurs naturally in all pill bugs. Orienting behavior towards acidic moisture is the basic form of orientation that was expected to be demonstrated in the lab. This behavior is very much related to the natural environments of pill bugs because moist environments provide ideal living conditions for them. One of the ways the independent variable was not manipulated was the addition of too much acid to the environment. Since pill bugs prefer slightly acidic soil, only a minimal amount of hydrochloric acid was needed.

According to research, pill bugs tend to move forward in a straight line when they are in their natural habitat in an open field. Therefore, I chose pill bug orientation as the dependent variable in response to chamber conditions (the independent variable). The reason was because under natural circumstances, the most efficient adaptive strategy when the animal lacks precise information about environmental resources or hazards is a linear pathway. However, when obstacles are encountered, pill bugs perform orientational behaviors. Orientation behaviors take the animal to its most favorable environment. In the case of my research, I hypothesized that the most favorable environment was the chamber with the slightly acidic moist conditions. By allowing the pill bugs to perform orientation behaviors, I was able to see their behavioral response (dependent variable) as a response of the environmental conditions (independent variable).

In the field of ethology, there are two main types of orientational behaviors and thus different ways of approaching the experiment. Taxis is when an animal moves toward or away from a stimulus. Taxis can be observed in response to changes in light, heat, moisture, sound, or chemicals. Kinesis is random movement and doesn’t involve stimuli. To observe animal behavior in this lab, the isopods were isolated in a controlled experiment. The method I chose to observe and measure is based on taxis orientational behavior by exposing the pill bugs to two different types of stimuli. Since the main goal of this experiment was to measure how the pill bugs responded to different stimuli, this method was the most appropriate. Given the method of choice, I measured qualitative data through mere observational methods. In other words, qualitative data was collected over a period of time to observe the behavioral and physiological aspects of the pill bugs. On the other hand, if I had chosen to measure kinesis, the data would have been vague as there would not have been any stimuli present. Moreover, I was able to measure quantitative data by counting how many pill bugs were in each chamber at different time intervals. This method was chosen over any others since I could control how many pill bugs I was observing in a more controlled setting with minimal external factors.

If isopods are exposed to neutral and acidic conditions, then they will prefer to stay in the acidic environment because they are used to living in these kinds of conditions.

My initial hypothesis stated that if isopods were exposed to neutral and acidic conditions, they would prefer to stay in the acidic environment because they have adapted to living in slightly acidic conditions. Based on the raw and statistical data, my initial hypothesis was supported. The purpose of the lab was to observe environmental choices of pill bugs. More specifically, the purpose of my research experiment was to test the preferences of pill bugs in relation to pH, in which I found that pill bugs prefer slightly acidic environments over neutral ones. Based on Table, which shows the preferential behavior of pill bugs, they started off in the neutral-acidic area and gradually chose the acidic environment as time passed by. There are several reasons as to why this occurs, including environmental and physiological factors. The pill bugs’ tendency to choose an acidic environment is based on their natural habitat which is made up of mostly dead organic matter. Detritus is what isopods feed on, and it as a more acidic pH. When organic matter decays, H ions are produced.

The higher average of the acidic chamber over the neutral chamber shows taxis toward the stimulus (moisture). The general behavior of the pill bugs is best classified as taxis because they were moving toward a certain stimuli, in this case a higher pH. The pill bugs showed signs of taxis by moving toward the most acidic environments and signs of kinesis when they were first placed in the choice chamber. According to a research conducted in 2004, pill bugs tend to gather, and stay, in clumps (Moriyama, 2004). This information shows that the rapid movement of the pill bugs upon being released into the experimental chambers was not normal behavior and instead, a reaction to a stimulus (new environment from that in which they were previously living in). The movement would be considered kinesis because the pill bugs were not moving toward or away from their stimulus, just in relation to being somewhere new.

The research conducted was carefully planned and performed in order to yield results with the least amount of experimental error. However, there were some limitations to the experiment that could have weakened the confidence levels of the observed results. One of these limitations was not being able to keep the external temperature of the chambers constant throughout the experiment. Since the experiment was performed in my classroom, there were times when the AC system was off causing the temperature to fluctuate. Pill bugs are cold-blooded, which means their body temperature is regulated by the surrounding environment. Therefore, their behavior could have also been influenced by the temperature – and not the acidity – causing them to huddle together when the temperature was cold. Another factor that could not stay constant was the age of the pill bug. Around winter time, pill bugs are not as abundant as the environment becomes too cold. Hence, when I gathered pill bugs for my research study, there were not too many to choose from. Even though I gathered more than enough subjects for the experiment, they were all of different sizes and consequently all were of different ages. Age is essential in pill bugs because the older they are, the faster they respond to a stimulus. To an extent, responding to a stimulus is a learned behavior and if the pill bug is young, then the response rate is much slower. My trials only lasted ten minutes, but ideally they could have gone for at least two hours in order to get more accurate results. Nonetheless, every pill bug during the observation study responded and performed both kinesis and taxis.

The Effect of Different Stimuli on Isopod Behavior. (2021, Oct 31). Retrieved from http://envrexperts.com/free-essays/essay-about-effect-different-stimuli-isopod-behavior 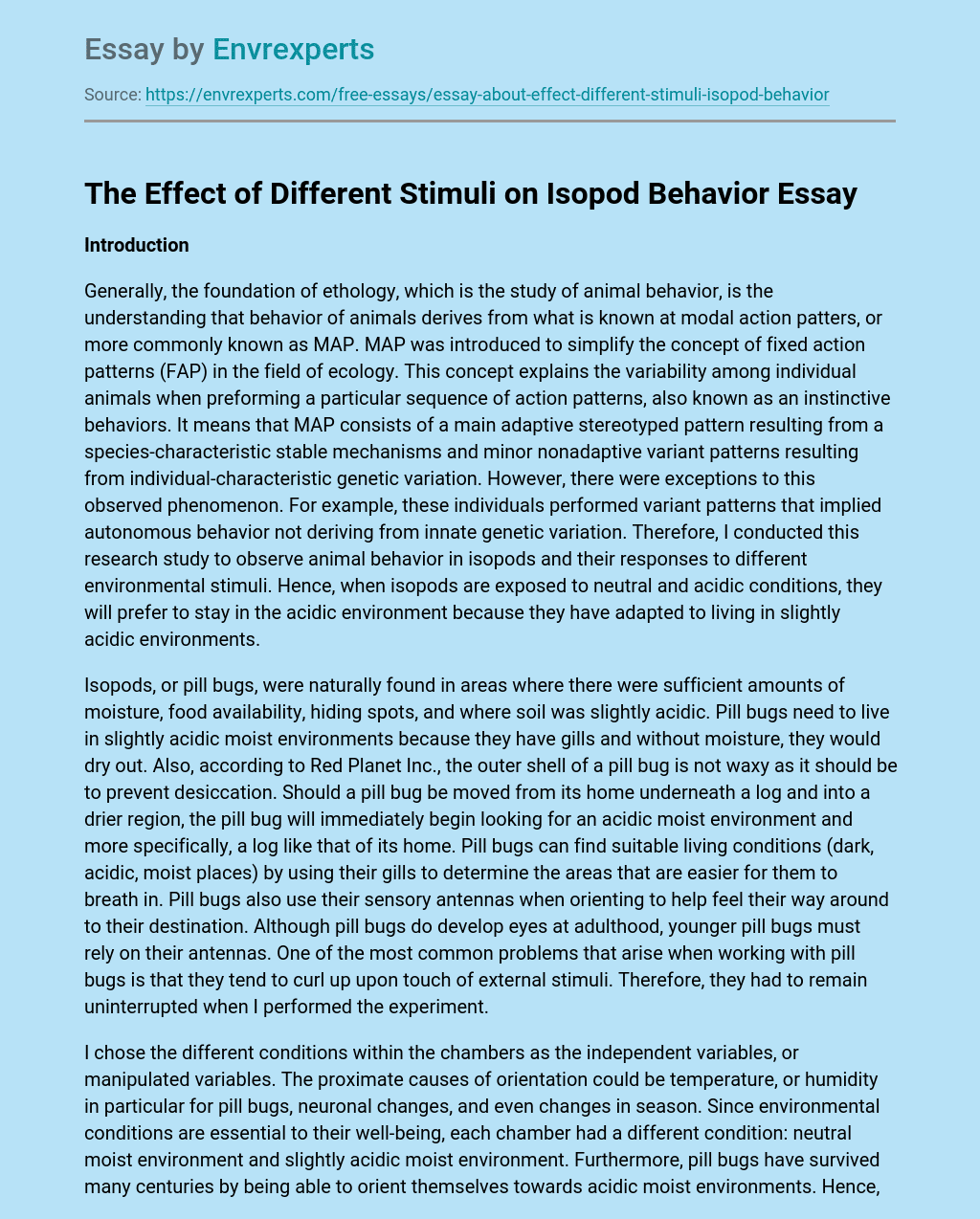