The Effect of the Japanese Knotweed on Balance of the Ecosystem

The damage caused to Earth's various ecosystems by human activity has been so extensive that the history of humankind has been coined as the, 'Anthropocene.' Right along with other grandiose, geologic epochs like the Pleistocene, Pliocene, Eocene and other periods of time on the geologic timescale that is millions of years. And rightfully so, as we have somehow managed to change the Earth so much, and in such a small amount of geologic time, that an epoch was named after it.

Don’t waste time
Get a verified writer to help you with The Effect of the Japanese Knotweed on Balance of the Ecosystem
Hire writer
$35.80 for a 2-page paper

There is undeniable evidence historically linking high concentrations of carbon dioxide with the onset of the industrial revolution, and it is no secret to anyone paying close attention that the health of the combined global ecosystem has been irreparably damaged or is in peril of being damaged, and in some cases completely falling apart. These damages have been caused by more than just our various types of environmental pollution, but by the overall negligence on the subject of environmental policy, especially regarding invasive species control.

The reality is that nobody knew or cared about the situation with burmese pythons, or any other invasive species in the Florida Everglades ecosystem, until a video of a python swallowing an alligator went viral. Nobody knew or cared about the existence of zebra mussels until they threatened the future of the fishing industry, and nobody will care about climate change until the rising sea levels sweep away their homes. People just don't want to believe that anything is truly wrong, and they will convince themselves of a myriad of false truths in order to ensure the safety of that bliss.

Or they will simply perpetuate their own naivety by not further educating themselves, to the point of being completely unaware of the nature and happenings within their world, and sometimes even their own community. Which ultimately leads to most individuals not knowing the difference between invasive and endemic, and seeing no harm in planting Fallopia japonica because it's easily maintained and aesthetically pleasing, or feigning a moment of compassion for an apex predator they were never equipped to take care of and in the selfish interest of escaping their biological responsibility, whether it is euthanasia or otherwise, they release it into the wild. The only true way to stifle environmental pollution, and ultimately invasive species proliferation is through community education and outreach, and it is important to recognize in this pursuit that we are obligated to become more ethical and educated than the society in which we grew up. This education is so vital to the progress of ecological conservation, because it helps people to better understand how some of their actions may undermine the efforts of conservation ecologists. This is especially important because Fallopia japonica was initially introduced in Europe in the 1830s, and across the United States in the late 1870s, intentionally, for erosion control, landscape screening, and as an ornamental plant in at least 88 counties.

Fallopia japonica displays considerable viability at colonization, as a result disturbed environments, like road sides, areas with high construction, railroads, and all other areas where large areas of vegetation were cleared or disturbed, are threatened. Because Fallopia japonica is a clonal, herbaceous perennial, with a rapid growth rate that allows it to quickly become densely shrubby and stands 4-10 ft high, with an average height of 6 ft. It outgrows most native species in Maine and the consequences of that advantage are devastating. Consider all forms of infrastructure maintenance, from road work to bridge construction that involve the clearing of large areas of vegetation, such efforts expose sites and leave them vulnerable to colonization by invasive flora, particularly Fallopia japonica. I have no doubt that most activity of humankind assists in the proliferation of invasive flora, at least in the case of Fallopia japonica; outside the parameters of interstate and international commerce. The research article, 'Planting Native Species to Control Site Reinfestation by Japanese knotweed' by R. Howard Skinner, Martin van der Grinten and Art E. Gover, contains information on the colonization success of Fallopia japonica with competition from endemic flora.

By the 1960s it had spread from Maine, south to Virginia and west to Indiana, and today it has spread even farther than that. Japanese knotweed can now be found as far west as Minnesota and northeast to Nova Scotia, so it is not unreasonable to assume that Fallopia japonica has nearly invaded the entirety of the eastern United States. This sort of introduction by horticulturalists is not uncommon, as there were no laws regarding invasive species until just 20 years ago in 1996, which marked the year congress passed the National Invasive Species Act. Unfortunately, such legislation came 120 years too late, and Fallopia japonica was given over a century of a head start in the proliferation of the eastern United States. One huge advantage that Fallopia japonica has displayed in field examinations has been high salt tolerance, which places them in a concise, yet ecologically fragile phylum.

In conclusion, Japanese knotweed is widely regarded as one of the most invasive flora in the world. With it's large size, rapid clonal growth, and dense monocultures produce a potent invader capable of transforming ecosystems entirely. Japanese knotweed has been found to greatly reduce diversity in a given ecosystem, and through rhizomatous growth the dense, monocultural stands are capable of being highly conservative. Fallopia japonica is unlike any endemic species in New England, and with rhizomes that can penetrate up to 2 m below the soil surface and 20 m laterally, this flora is a large, resilient invader capable of suppressing forest regeneration. Without the direct education and participation of the greater community, of not just the United States, but the world; then invasions like this one simply will not be stopped. Unless every citizen is armed with the proper tools, knowledge and chemicals to properly suppress such an effective invader the nature of the New England ecosystem will undeniably change. We must never forget that aside from your nation of origin, ethnicity, primary language, or whatever lines you draw in the sand; environmental issues are not an American, Chinese, Belgian, Congolese or even just a scientific problem, they're a Human problem. The Earth is our home, from where we create our fantastical technologies and formulate our extensive dogmas, doctrines and scientific theories. If we are to progress as a species we must follow by the example of Bolivia and never forget that the Earth is a sovereign, living organism that is also entitled to civil liberties.

The Effect of the Japanese Knotweed on Balance of the Ecosystem. (2021, Oct 31). Retrieved from http://envrexperts.com/free-essays/essay-about-effect-japanese-knotweed-balance-ecosystem 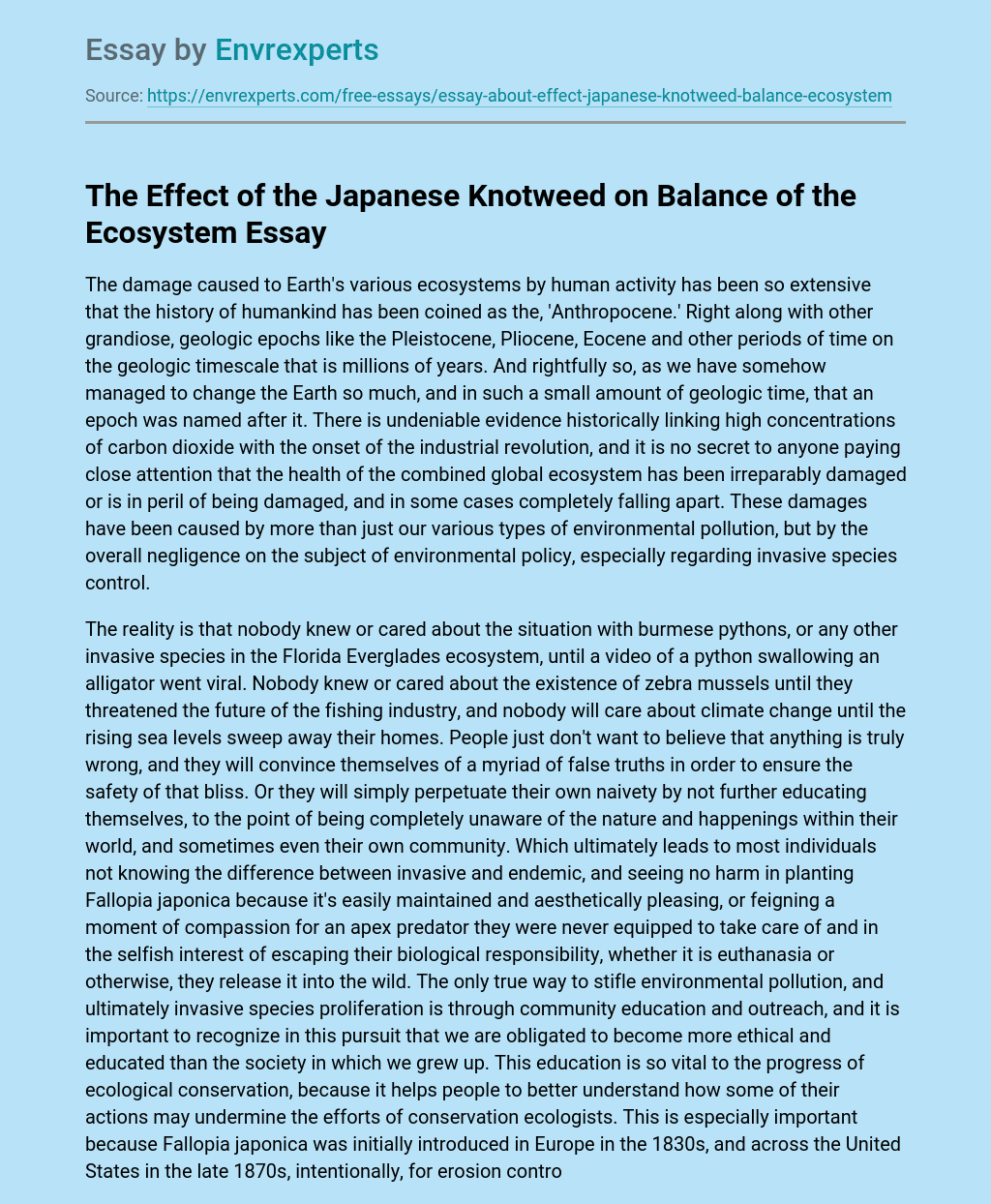