Effect of Pandemic on Environment Problem

Earth, our home, our abode, is rebooting. Mother Earth is healing. All components of air, water, and the nature is purifying itself. This world pandemic’s only good thing might be that our greens will be green again.
Our two-life supports, air and water, and its protector, the trees have sighed a heave of relief as almost every kind of environmental pollution has drastically fallen due to the numerous lockdowns imposed by different countries across the globe.
As the world fights coronavirus, nature is slowly showing positive signs of healing itself after years of disruption
India, ever since the lockdown to curb COVID-19 came into effect, plenty of reports have pointed out an overall reduction in water and air pollution as a result of which animals thought long lost, have made a comeback.

Don’t waste time
Get a verified writer to help you with Effect of Pandemic on Environment Problem
Hire writer
$35.80 for a 2-page paper

Like the flamingos that turned a creek in Mumbai pink. Clearly, the lockdown is doing these creatures some bit of good.

Air, it is what we breathe and on what we live on.

But we all know that due to the sudden splurge in industries and population as well as vehicles, the earth was being suffocated with a humungous level of air pollution all around the planet. People were being diagnosed with all kinds of respiratory problems.
Let’s talk about our own country, India. The capital city of New Delhi has been bringing the crown of the most polluted city in the world home almost every year. But when India imposed a nationwide lockdown to stop the imminent spread of the novel COVID-19, then this country of 1.

3 billion people came to a near halt also also provided a temporary remedy to another pressing health issue: suffocating pollution levels.
The World Health Organization estimates that dirty air kills 7 million people globally, primarily through increased mortality from diseases including acute respiratory infections.
In the capital, New Delhi, government data shows the average concentration of Particulate Matter 2.5 plunged by 71% in the space of a week — falling from 91 microgram per cubic meter on March 20, to 26 on March 27, after the lockdown began. The World Health Organization considers anything above 25 to be unsafe.
The lockdown improved the air quality index to satisfactory levels in nearly 90% of the 103 cities monitored by the country’s Central Pollution Control Board on March 29, according to data on the environmental agency’s website.
The clean air could aid the country’s battle against the pneumonia-like virus as air pollution makes people more vulnerable to lung disease. In India, it’s also leading to a sharp drop in complaints from people with respiratory problems, according to Delhi-based pulmonologist Pankaj Sayal.

According to Jyoti Pande, co-founder of the Indian environmental organization Care for Air. “The low Air Quality Index and blue skies prove beyond doubt that a lot of the air pollution is a result of human activity.’
And we surely agree to her!
Water. Water is something that is a very basic need of homo sapiens. But it is also one of the most exploited natural renewable resources of all. It is used for religious purposes, and then that water is again used as a garbage dump. This over-exploitation has led to the water being heavily polluted, and the once drinking-safe river water has become even bathing-unsafe.

Water quality across the planet has improved manifolds with less vehicles on the road &amp; less factories being operational.
Talking about India, although the present lockdown is posing several hardships for the countrymen, but at the same time, the present crisis has come as a blessing in disguise when it comes to decrease in level of pollution in the rivers.
Citizensof the Sangam city are witnessing cleaner and purer water in the two holy rivers, Ganga and Yamuna, something which has not been witnessed by the citizens in past several decades.
The water quality of river Ganga at Har-ki-Pauri that was declared ‘unsafe for bathing’ in the holy city of Haridwar has been classified as 'fit for drinking', an unprecedented success which the ambitious schemes of the government could not do for years even after pumping thousands of crores.
The water quality of the Ganga river in Uttar Pradesh has also seemingly improved.
According to the Uttar Pradesh Pollution Control Board (UPPCB), healthy water should have a dissolved oxygen level of at least 7 mg/liter. The dissolved oxygen level upstream in river Ganga is 8.9 mg per liter while in the downstream it is 8.3 mg per liter. This clearly shows that water quality has improved significantly and is optimal for drinking.
The organic pollution level still gets diluted in the river but it is the chemical pollution by industries that destroys river's self-cleansing properties. The self-cleansing properties have improved due to which the water quality has improved.
According to reports, the rare South Asian River Dolphin, also known as the Ganges Dolphin, was spotted near the ghats in Kolkata. It is apparently the only freshwater dolphin categorised as 'critically endangered' so its recent appearance came as a pleasant surprise to environmentalists.

That is such a sigh of relief that even after thousands of days and crores invested in the cleaning of these rivers, a micro being, a virus has managed to purify the waters.
In overall this pandemic crisis has surely had a positive impact, at least on the environment.

The coronavirus pandemic has caused a global reduction in economic activity and although this is a major cause for concern, the ramping down of human activity appears to have had a positive impact on the environment.
Industrial and transport emissions and eﬄuents have reduced, and measurable data supports the clearing of pollutants in the atmosphere, soil and water. This effect is also in contrast to carbon emissions, which shot up by 5 percent after the global ﬁnancial crash over a decade ago, as a result of stimulus spending on fossil fuel use to kickstart the global economy.
The month of May, which usually records peak carbon emissions due to the decomposition of leaves, has recorded what might be the lowest levels of pollutants in the air since the 2008 ﬁnancial crisis.
China and Northern Italy have also recorded signiﬁcant reductions in their nitrogen dioxide levels.
Further, sources suggest that there has been a 25 percent drop in energy use and emissions in China over two weeks which is likely to decrease the overall annual carbon emissions of the country by 1 percent.
In India the results were similar too; March 22 was the ‘Janata Curfew’, following which, a signiﬁcant dip in air pollution levels was measured across the country. Cities like Delhi, Bengaluru, Kolkata and Lucknow saw their average Air Quality Index (AQI) staying within two digits.
Another example of cleaner air was seen when, on April 3rd, residents of Jalandhar, a city in Punjab state, woke up to a view of the Dhauladhar mountain range, a rare feat in normal times, considering the distance between the two places- lying nearly 213 kilometers apart from each other and have not been visible from the city in recent memory.
Water bodies have also been clearing and the rivers Yamuna and Ganga have seen signiﬁcant improvement since the enforcement of a nationwide lockdown. According to the real-time water monitoring data of the Central Pollution Control Board (CPCB), the average water quality of 27 points of the Ganga seen in recent days, is suitable for drinking and propagation of wildlife and ﬁsheries.

There are a few negative trends also. For one, we’re using a lot of single-use plastics right now. Many grocery stores have banned using reusable bags to help stop the spread of the virus.
In conclusion, the takeaway from this is that once nations , better implementation of the environmental, transport and industry regulations should be considered a priority to ease the detrimental impacts of human activity on the environment.
The international community, as it ﬁghts to regain an accepted normal, ought to take into consideration, the enlightening results of this pandemic. The environment, for one, bounced back faster than we thought it could. And it would be downright irresponsible to let that knowledge take a backseat once social distancing and nationwide lockdowns are no longer required.

Effect of Pandemic on Environment Problem. (2021, Oct 31). Retrieved from http://envrexperts.com/free-essays/essay-about-effect-pandemic-environment-problem 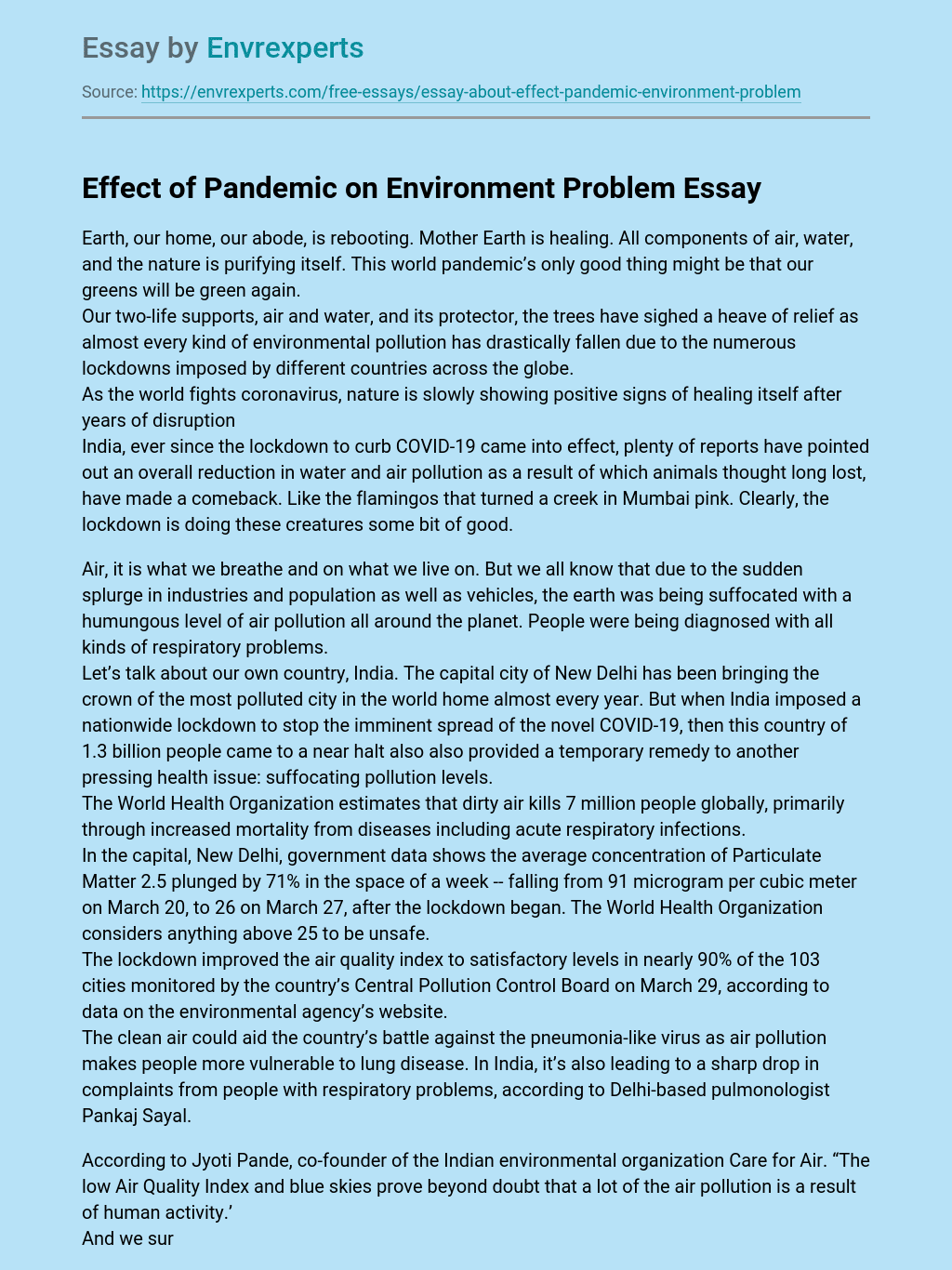