The effects of embalming fluid, and the alternatives

Embalming is the process of temporarily preserving a corpse by draining the blood and fluids from the body and replacing them with a fluid/chemical solution. But is it dangerous? Well, it\'s not dangerous for the dead body.But, for the living, it\'s a different story. Modern embalming started during the American civil warIt\'s really this guy, Thomas Holmes,Who gets credit for how prevalent it still is today. To get the bodies of dead soldiers to survive the long train ride back up north.

Don’t waste time
Get a verified writer to help you with The effects of embalming fluid, and the alternatives
Hire writer
$35.80 for a 2-page paper

Holmes would follow the civil war from battle to battle, setting up embalming tents and claims to have embalmed over 4,000 men With his \"secret techniques\"From the civil war until about 1910, embalmers used arsenic to preserve the bodies. Some embalmers would use up to twelve pounds of arsenic to preserve a single body.The federal government had to step in and ban it because so many embalmers were dying And over a hundred years later there is still arsenic hanging around In the soil and groundwater of older cemeteries.

So that was then What do embalmers use now? Embalming fluid is a mix of formaldehyde, dyes, various chemicals, and water The big issue is the marquee ingredient: formaldehyde Which is actually a gas in its pure form, depending on where the solution is going your arterial system, your body cavit, The formaldehyde concentration can be 5%, it can be 50%. It\'s colorless, strong smelling, highly flammable, and Designated a carcinogen.
Everyone from the World Health Organization To the National Cancer Institute Has said that working as an embalmer Puts you at an increased risk for developing leukemia ,also ALS, the disease that sparked the ice bucket challenge Debilitating disease for which there is no cure.

The effects of embalming fluid, and the alternatives. (2021, Oct 31). Retrieved from http://envrexperts.com/free-essays/essay-about-effects-embalming-fluid-and-alternatives 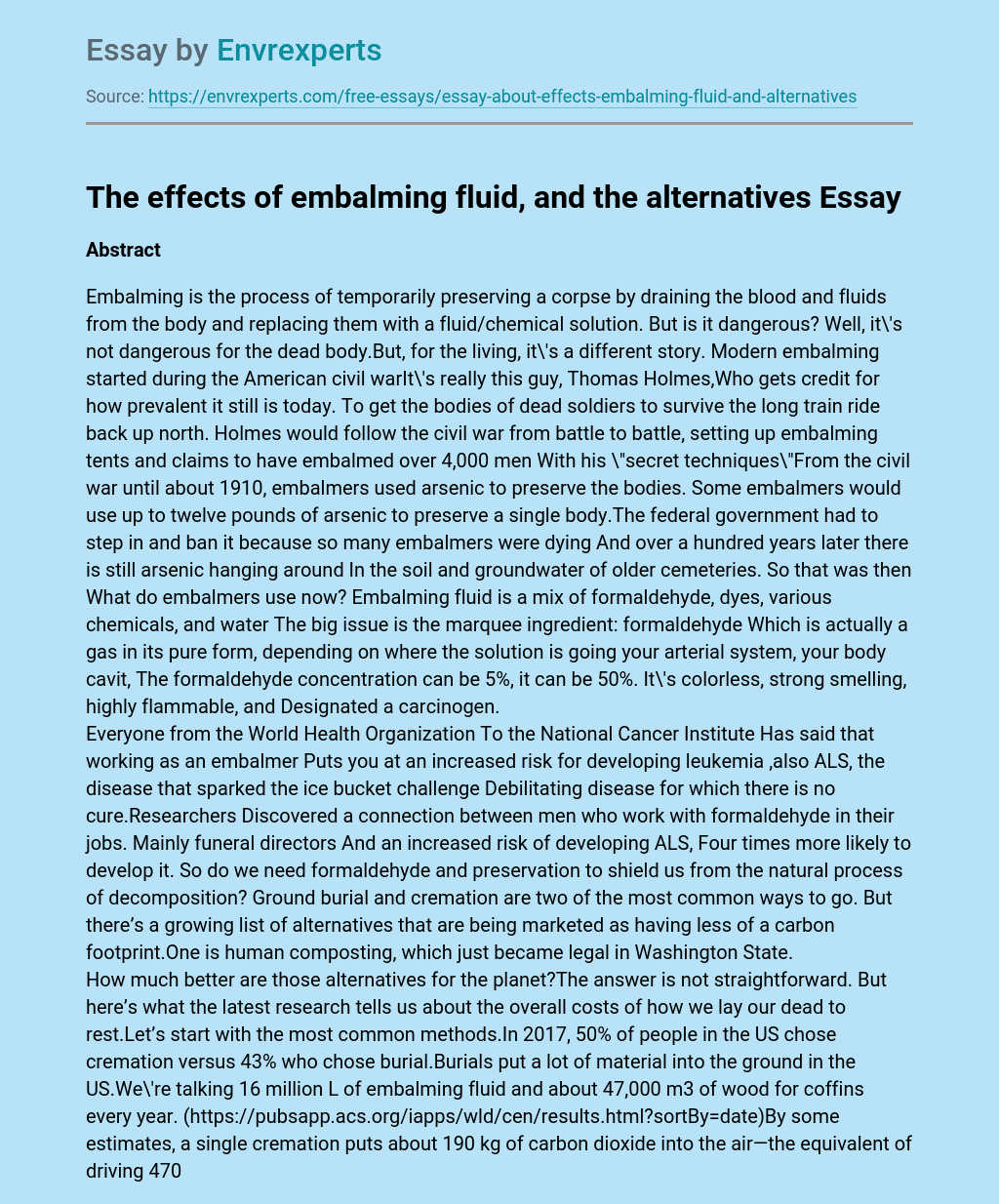