The Effects of Global Warming on the Earth

The Earth is such a wonderful and majestic place. During the day, sunlight enters through the atmosphere of gases surrounding the world. Plants breathe and humans and animals survive by breathing in Oxygen and releasing Carbon Dioxide for which plants use. The Earth experience all of these wonderful seasons such as Winter, Summer, Spring, Autumn. In some regions, such as the Caribbean, experience the Tropical Climate. All of these climate and seasons contribute to the flourishment of amazing species of animals and plants.

Don’t waste time
Get a verified writer to help you with The Effects of Global Warming on the Earth
Hire writer
$35.80 for a 2-page paper

Now imagine an Earth where the sun is becoming hotter and hotter and animals and plants are dying. Imagine a world where sunlight gets trapped in the atmosphere causing a variety of problems. Imagine humans and animals not being able to breathe, thus causing a disturbance in the food chain. This is happening slowly but surely in the Earth today. Global Warming is a serious issue occurring in the world causing all living creatures in the world to die, causing problems in the atmosphere and ruining the beauty of the Earth.

Global Warming is the gradual increase of the global temperature on Earth’s atmosphere generally attributed to the Greenhouse Effect caused by increased levels of carbon dioxide, CFCs, and other pollutants. This is caused by an increase in Greenhouse Gases, largely due to the effects of human industry and agriculture. Greenhouse Effect is the trapping of the sun's warmth in a planet's lower atmosphere, due to the greater transparency of the atmosphere to visible radiation from the sun than to infrared radiation emitted from the planet's surface.

Just as there are negatives effects there can be possible solutions that can reduce the effects of Global Warming once they are practiced.

As global warming continues, various treats have been posed to the drastic rise in global temperatures causing tremendous damage to the natural environment. Heat is being trapped in the atmosphere due to the emission of toxic gases from agriculture and industries. Consequently, heat waves are being experienced world-wide and are becoming very tense and longer. This effect leads to a chain of problems in the environment. Such as the rise in sea levels due to the melting of ice caps in the Arctic and Antarctica. Due to the drastic rise in temperature, during Summer, there is an increase in the melting of ice caps resulting in increase in sea level. In Antarctica, polar bears, penguins and other animals that depend ice are becoming lesser in population. Since large ice caps are melting these animals get trapped between ice sheets and die. Within this generation, there were videos circulating social media showings whales stuck between ice caps that have floated and blocked their passage. When sea levels rise it causes extreme damage to coastal habitats. As sea water moves inland, erosion increases and flooding of coastal areas occur. All of these consequences of global occur specifically because of the increase of harmful gases into the atmosphere. They are called Greenhouse gases and are the most harmful gases in the atmosphere. Greenhouse Gases include: Carbon Dioxide (CO2, enters the atmosphere through burning fossil fuels (coal, natural gas, and oil), solid waste, trees and wood products, and also as a result of certain chemical reactions), Methane (CH4, is emitted during the production and transport of coal, natural gas, and oil. Methane emissions also result from livestock and other agricultural practices and by the decay of organic waste in municipal solid waste landfills), Nitrous Oxide (N2O, Nitrous oxide is emitted during agricultural and industrial activities, as well as during combustion of fossil fuels and solid waste) and Fluorinated Gases ( Hydrofluorocarbons, perfluorocarbons, sulfur hexafluoride, and nitrogen trifluoride are synthetic, powerful greenhouse gases that are emitted from a variety of industrial processes.) all these harmful gases add to global warming, increased melting of ice caps, raised sea levels and destruction of the beautiful planet Earth .

Drought is another serious issue caused by Global Warming and is experienced in drier places in the world. Due to widespread Global Warming, dry areas are becoming drier and drier areas are expanding. A Drought is a prolonged period of abnormally low rainfall leading to the shortage of water. Global Warming has added to the variety of factors associated with droughts. In mountainous areas that experience snow drought is most likely to happen gradually. As temperatures increase, the snow on these mountains melt, causing evaporation. This leads to more rain falling than snow and eventually there will be no snow and water. Thus, less rain since evaporation cannot occur without water. Consequently, there is the possibility of a drought occurring. In drier, low-lying areas, droughts can occur quickly in rivers and lakes that are considered to have less than normal levels of water. Australia has a high level of drought and is soon to increase. According the length of a drought, there can be devastating effects to the environment. Droughts can affect poor communities and built-up communities. However, it tends to affect the poor communities more. In poorer communities, the effect on water supply is a serious impact. In severe drought conditions, water restrictions may be imposed by the government. Thus, plants are not being watered regularly, resulting in withering. If plants die due to droughts then animals and humans cannot survive. This can cause serious health problems to humans and can also lead to starvation for both humans and animals. Global warming is slowly reducing the beauty of the world and causing various problems to all living creatures.

Plants and animals are being significantly affected by global warming. Many species of animals are migrating from their natural habitat and they are slowly decreasing because of this. According from a report from the National Academy of Sciences, “many species of animals are moving from the equator to the poles in order to find a comfortable living temperature.” However, the quick rate at which global warming is taking place is causing quicker changes in the climate. Consequently, many animals cannot compete with the rate of climate change when migrating and can eventually become extinct. Additionally, migratory birds are now arriving during the earlier days of summer, nesting and feeding for several days and weeks. Plants that are being killed because of global warming, are those that can fight against harmful bacteria and parasites. The temperatures are rising and becoming warmer, thus there is an increase rate of disease- causing pathogens killing of plants that were protected before. This can eventually lead to starvation.

Global warming is definitely a serious problem in the Earth and is gradually causing a major threat to the world. If global warming is not prevented soon, the entire planet can face many disadvantages. Ice caps are melting, sea levels are rising, animals and plants are dying and droughts are occurring more frequently. With this rate of rapid globalization, many plants and animals may become extinct and the world will be lead to the worse situation man could ever think, starvation and death.

The Effects of Global Warming on the Earth. (2021, Oct 31). Retrieved from http://envrexperts.com/free-essays/essay-about-effects-global-warming-earth 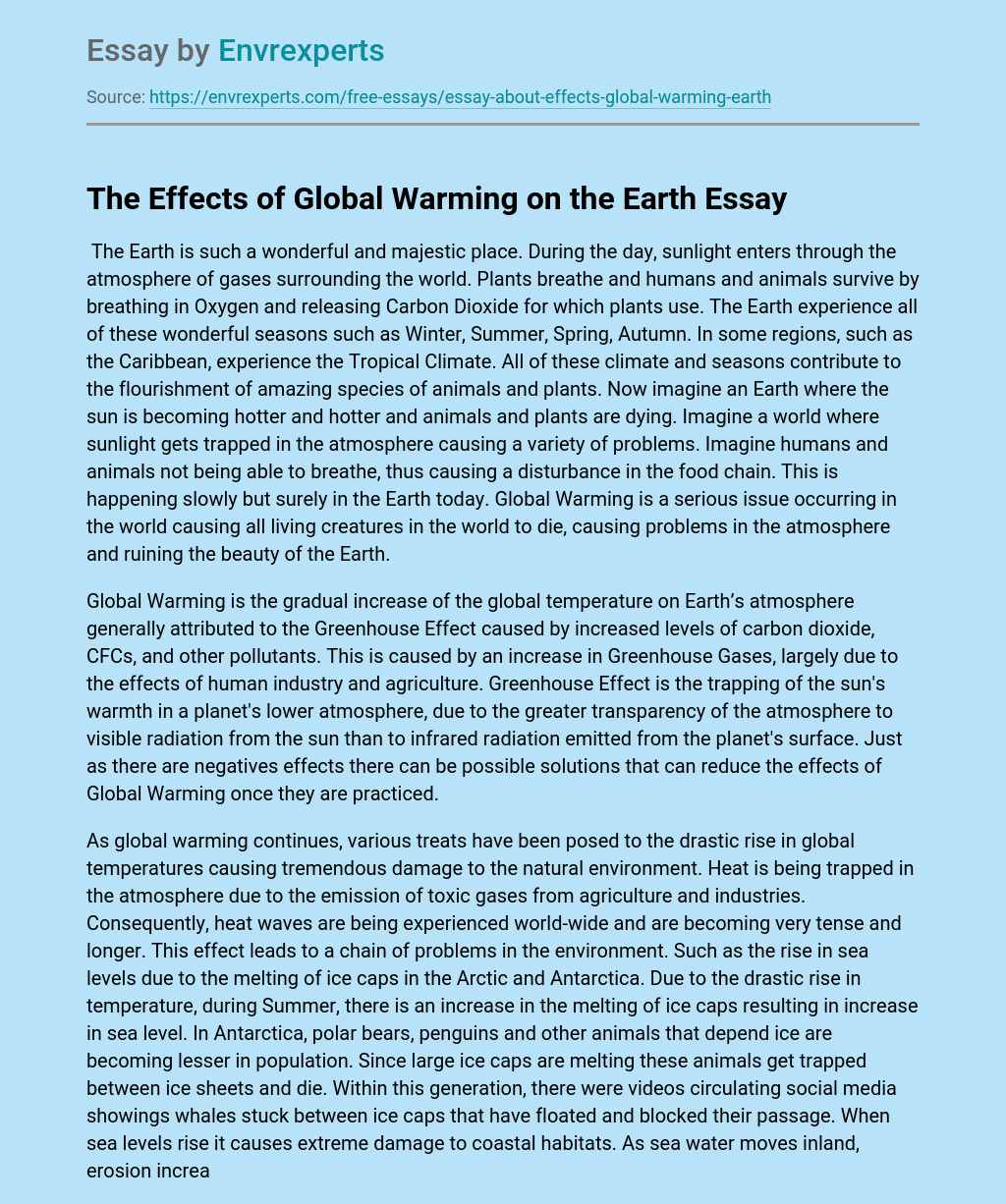