Effects of Global Warming on Our Health and Sustainability

Humankind is conducting an ongoing experiment to see what will happen to our health and to the well being of the planet when changes in the earth's climate are made. This experiment is called global warming. Global warming is allegedly changing the world, as we know it. The concern of global warming is the increasing temperature of the earth's climate, which is expected to warm even further because of human activities that include the burning of fossil fuels to run cars and trucks, heat homes and businesses, and power factories.

Don’t waste time
Get a verified writer to help you with Effects of Global Warming on Our Health and Sustainability
Hire writer
$35.80 for a 2-page paper

These significantly change the atmosphere's amount of greenhouse gases. Advocates of global warming and its heating effects expect dire consequences; although, opponents of global warming beg to differ and challenge these claims. Evidence shows that the earth's climate has been warming, but it is far from certain that the temperature will rise. Despite this, the U.N. body that has been studying the possibility of global warming has forecast that, by the end of this century, the world's climate will be about 1.

6 – 6.3 degrees Fahrenheit warmer than today and that precipitation worldwide will increase by about 7 percent with significant regional variation. The same U.N. body predicts that most of the warming will take place during the night hours of the day and during the winter season. Temperatures are expected to increase the most towards the poles. After analyzing temperature records, summertime highs have actually risen in this century while winter lows have risen.

Humans have triggered a steady increase in the concentration of some greenhouse gases since the beginning of the industrial revolution.

The apparent effects of global warming can be seen in the changes that the earth's climate has undergone in the last century. Mean surface temperatures have risen 0.6 – 1.2 degrees Fahrenheit since the late 19th century. The 20th century's 10 warmest years all occurred within the last 15 years, 1998 being warmest year on record. The snow cover in the Northern Hemisphere and floating ice in the Arctic Ocean has decreased, and sea level has risen four to ten inches over the past century. (Baliunas, 1999)

Evaporation will hypothetically increase as the climate warms, which will increase average global precipitation. Soil moisture is also likely to decline in many regions. Deserts may also expand due to the change in temperatures. Rising global temperatures are expected to raise sea level even further and change other local climate conditions, as well. Changing regional climate could alter forests, crop yields, and the supply of water. Global warming can also threaten human health, and harm birds, fish, and many types of ecosystems. (Baliunas, 1999)

Climate change can affect ecosystems by altering the conditions that make them distinct. Most ecosystems exist within narrow ranges of temperature and precipitation. Changes in the frequency of storms, floods, droughts and high and low temperatures affect the species productivity. Indeed, any long term trend toward a new climate regime will alter the location and species composition of the ecosystem. Biological productivity will also be affected and, hence, the sustenance of inhabitants of the ecosystem. In addition, climate change can alter the geographic range of microbes, insects and animals that feed on, or otherwise interact with, the higher plants of the ecosystem. (EPA, 2000)

Global Warming may also affect photosynthetic microorganisms via ultra violet light rays. UV rays consist of a portion of the electromagnetic spectrum with wavelengths shorted than visible light. The sun produces UV, which is commonly split into three bands of decreasing wavelength. Shorter wavelength radiation has a greater potential to cause biological damage on living organisms. The longer wavelength ultraviolet band, UVA, is not absorbed by ozone in the atmosphere. UVB is mostly absorbed by ozone, although some reaches the Earth. The shortest wavelength band, UVC, is completely absorbed by ozone and normal oxygen in the atmosphere. (EPA, 2000) Single-celled algae and chlorophyll and plant hormones are especially sensitive to UV radiation.

Effects of Global Warming on Our Health and Sustainability. (2021, Oct 31). Retrieved from http://envrexperts.com/free-essays/essay-about-effects-global-warming-our-health-and-sustainability 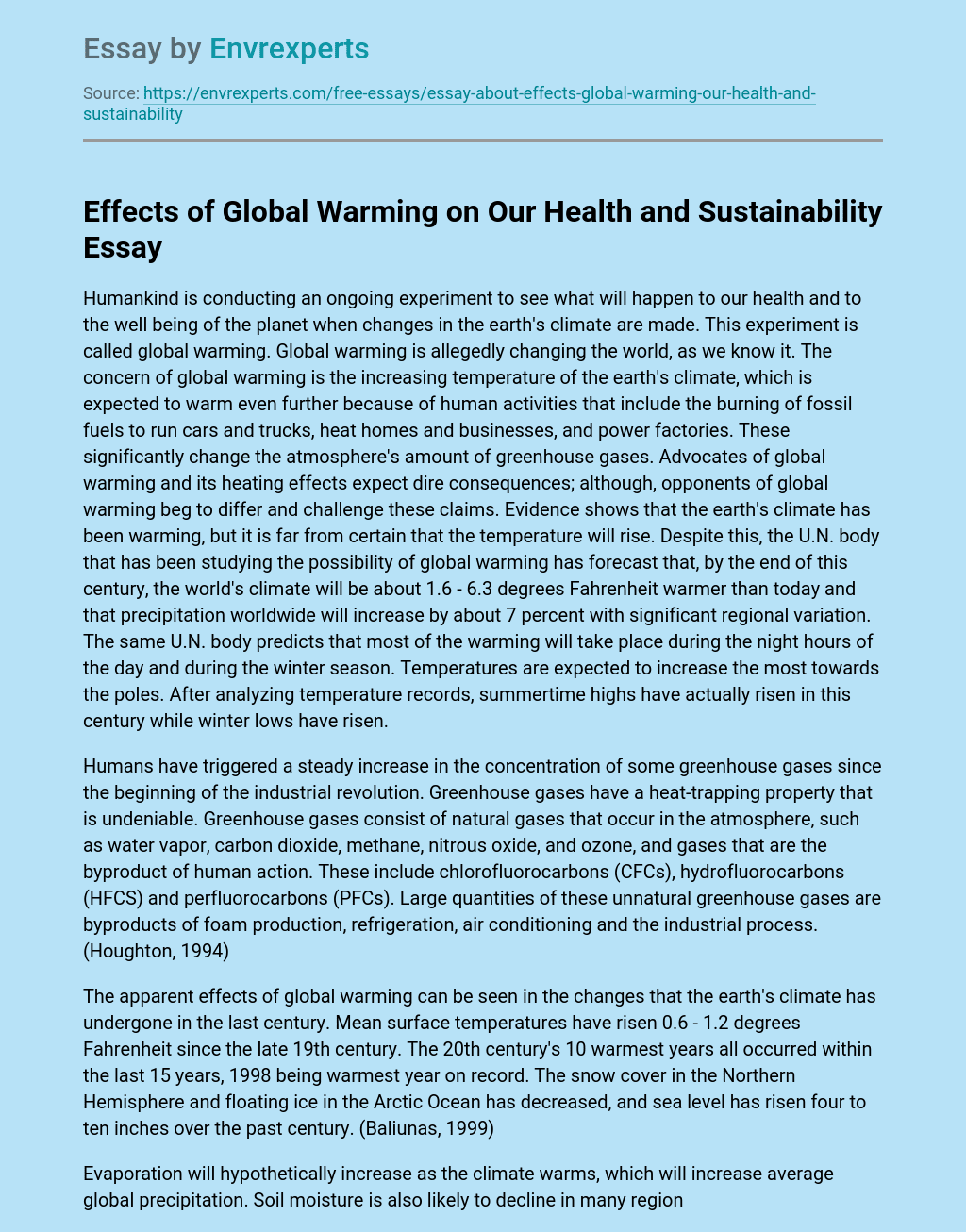