The Effects of Ocean Acidification on Oysters

Ocean acidification has been a prominent topic over the last decade along with the discussion of global warming. As more carbon dioxide is emitted, the ocean absorbs and stores more carbon dioxide in the form of carbonic acid, which is a weak acid. As a result, the carbonate ions that shell organisms need to build their shells are removed and incorporated into carbonic acid, therefore shell organisms do not have the necessary ions to build their outer shells leading to their demise.

Don’t waste time
Get a verified writer to help you with The Effects of Ocean Acidification on Oysters
Hire writer
$35.80 for a 2-page paper

While the Earth’s surface temperature have not increased drastically, the little change we experience on land actually translates into a dramatic change in the ocean. A slight change in pH could affect the survival of different organisms and bring irreversible effects to the ecosystem with shell organisms and coral reefs among first to be endangered. As I will discuss in the following paragraphs, shells organisms like oysters are predated more frequently and become more susceptible in their larvae and juvenile stage due to ocean acidification, additionally they are prone to different environmental forcings.

There are a couple things that could affect oysters’ growth, including the availability of carbonate ions, salinity, temperature, and pH of ocean water. In a research done by the researchers at the University of Hong Kong and University of Gothenburg, they found that higher seawater temperature increases the saturation state of carbonate which in turn facilitate the growth of Pacific oyster (Crassostrea gigas) (Ko et al., 2014). In their research, they used pH 7.4 seawater for their experiment set, comparing to the normal pH 8.

1 seawater, in this case they project pH 7.4 to be the future seawater’s acidity at the end of this century (Ko et al., 2014). Warming that leads to higher seawater temperature today is mainly due to carbon dioxide emission owing to the burning of fossil fuels. The effect of lower pH and heavy precipitation, off the coast of Tsingdao, China in the Yellow Sea as described in Ko’s paper, forces oysters to use more energy to maintain water balance within their bodies, as seen in the lowered lipid level of the oyster larvae in the experiment (Ko et al., 2014). Meanwhile, the young oyster larves also need to allocate energy to change the formation of their shells from aragonite to calcite (Ko et al., 2014). Calcite is the more stable and insoluble form in contrast to aragonite, so it is a very important transition process for them to survive this stage (Ko et al., 2014). The process would be hampered shall the energy budget is exceeded if too much energy is used to solely maintain their inner water balance. Change in salinity, temperature, and pH varies according to seasonality, but ocean acidification and warming would amplify the change and make it harder for oysters to survive. The low pH in particular significantly slowed larval growth in the experiment, which indicates a higher possibility of them being eaten by their predators, since their outer shell would not have fully developed yet (Ko et al., 2014).

Both experiments from the two articles were conducted in laboratory conditions which could lead to deviations of results. Although they replicated the same temperature, salinity, pH etc. in their laboratory, there are a lot of situations in the ocean that one cannot duplicate. Oysters live in the coastal water, whereas ocean current, seasons, tides, river runoffs, competitors, predators, monsoons etc. can alter their chances of survival. Monsoons are more significant in Asia; they are associated with the Yellow Sea as well, where Pacific oysters thrive as Ko’s experiment focused on. While actual conditions can vary greatly, both researches proved that oysters are very prone to changing environmental conditions, of which they had to cope with from their juvenile phase to their adult phase. The number of oysters could be seen as an indicator of how severe ocean acidification has become as an outcome of global warming. We could also in general tell the impact of ocean acidification to oysters in the oyster farms here in the Pacific Northwest apart from the researches: a sharp decrease in oyster supply, also as suggested in Ko’s article (Ko et. al, 2014).

Ocean acidification is happening and the ocean is still readily absorbing carbon dioxide, increasing its acidity. There is nothing we could do unless we reduced the emission of carbon dioxide to the atmosphere. Numerous studies have been conducted with a specific focus on coral reefs and shell organisms. They have consistently shown marine organisms are not able to adapt to such abrupt environmental changes in a short time interval. Coral bleaching and the diminishing oyster population are warnings that anthropogenic activities might have already crossed the threshold of what the environment can accommodate. Given that the current trend goes on, we would eventually push oysters to the brink of extinction, as well as many other organisms in the open ocean.

The Effects of Ocean Acidification on Oysters. (2021, Oct 31). Retrieved from http://envrexperts.com/free-essays/essay-about-effects-ocean-acidification-oysters 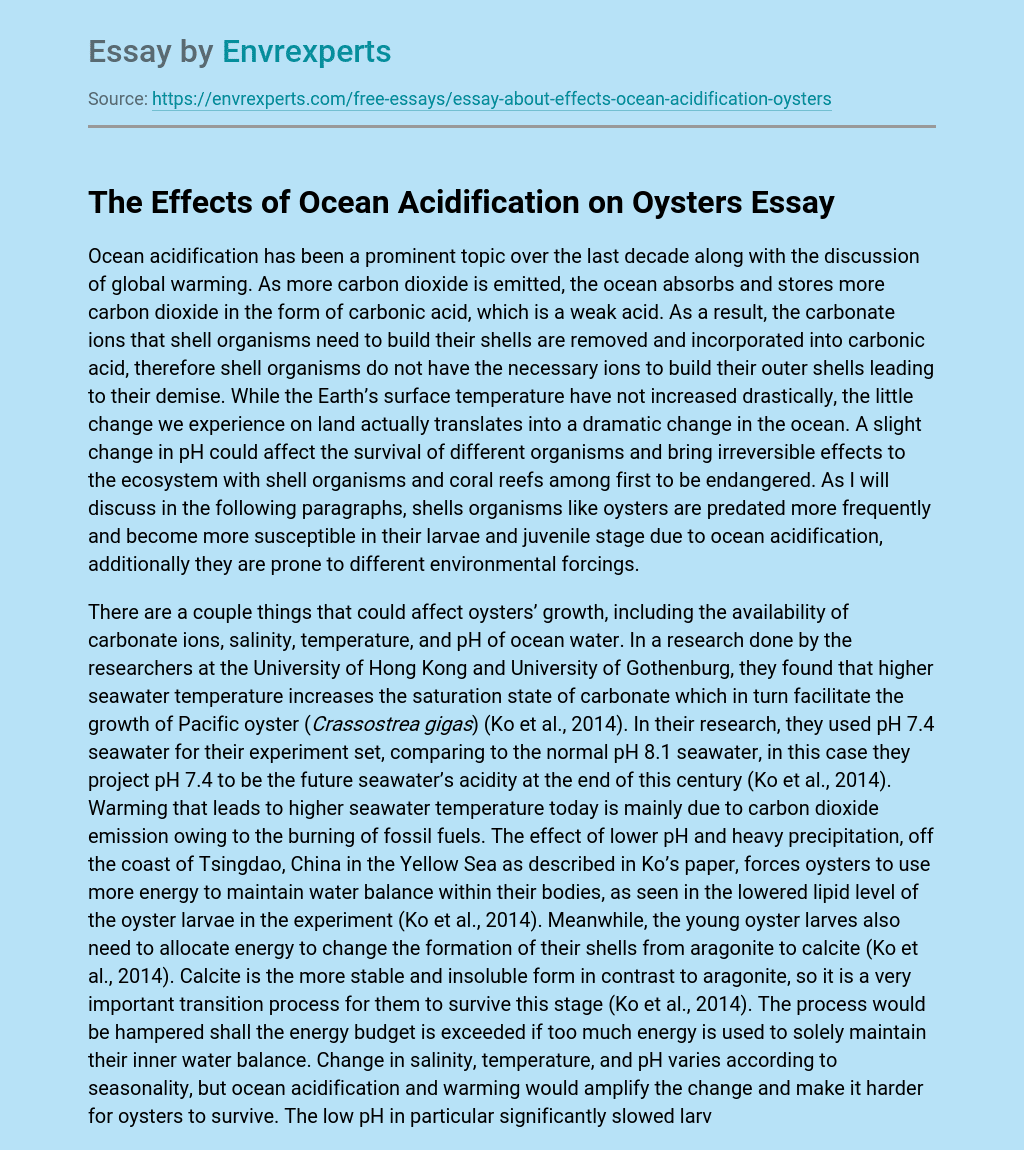