Effects of Solar Powered Cars on the American Economy

As the world moves further with technology, the next big step will be the introduction of solar-powered cars. For years, cars have relied on oil, for gasoline, their primary form of power. The United States, only being able to produce so much oil, has relied on importing it from other countries. 63% of all oil is used as fuel (gasoline) for automobiles (Perkins, "Production" 6). With increasing use of automobiles in everyday life, the U.S has not been able to produce enough oil to keep up with the country's needs.

Don’t waste time
Get a verified writer to help you with Effects of Solar Powered Cars on the American Economy
Hire writer
$35.80 for a 2-page paper

"It has caused a deepening of the U.S.'s dependence on foreign oil.

Domestic oil demand, which had fallen to 15.7 million barrels a day (bbl/d) in 1985, climbed to 17 million last year. Meanwhile, domestic production has been declining aging U. S. oil fields produced only 7.2 million bbl/d last year, down from 8.9 million in 1995. As a result, the U. S., the world's largest energy consumer, now imports more than 50% of its crude oil and petroleum products" (qtd.

Miller). A lot of US revenue is derived from the production of the gas and oil industry. The gas and oil industry produce a great percentage of jobs, which help the economy. The industry also produced a great deal of profit from exporting of its oil to other countries and the capitalizing of oil being imported into the US. All this revenue greatly helped the American economy and will continue to help in its growth. However, once solar powered cars are introduced into the American market, its economy will greatly diminish.

The introduction of solar powered cars into the American market would greatly diminish its economy, nevertheless, its introduction would be extremely beneficial to the United States, in the respect that it would open a world of new opportunities, new jobs and maybe even solve some of the nation's current crises. A solar powered car would be beneficial to the family who was spending hundreds of dollars a year on gasoline. It would be beneficial to those working in the new factories, because it would create more jobs engineering, designing and manufacturing the cars and its technology. Even more important, once the United States rids its consumers of oil-based energy, it will clean up the carbon-based problems plaguing its environment.

However, even though the production of solar powered car would have a long-term, positive effect, its short-term effect, would be devastating to its economy, which is dependant on gas and oil profits. "In the long term the nation should–and will–be fueled extensively by renewables. Several of the technologies, in fact, are carving market niches now. Controversy arises, however, over exactly how– and how aggressively–to speed their development. Environmental groups call for increased federal direct grants, tax subsidies, and mandates. That sounds logical clearly, the sooner the nation unhooks from oil, the better. But there's danger in doing it too quickly. Force-feeding technologies can result in wrong choices and would impose an unacceptable economic cost" (qtd Miller).

The first blow to the economy would occur with its workers. Over the last 18 years, from 1980-1998 (statistics for 1999 were not yet available), the total number of workers employed by the Oil and Gas industry, was a great percentage of the overall number of jobs, created in the US (Perkins, "Petroleum" 3). In 1980, if the total US  employment was 100,000, then respectively, the total number of jobs produced by the Oil and Gas industry (not including the workers at the service stations and wells), was 1,700.

The pattern continues through 1998: If total US employment was 132,000, then the total employment produced by the Oil and Gas industry (not including gasoline service stations and wells), was 1,400. While respectively, the percentage declines as the number of total jobs increases, the gas and oil industry still creates a significant amount of jobs in the US economy. The wells, which are used to explore for oil, yield a separate employment status. In 1997 and 1998, the total number of persons employed at these wells, was approximately 635,000 (Perkins, "Petroleum" 5). The number of persons employed at the gasoline service stations yield and even greater number. In 1997 and 1998, the total number of employees at service stations reached roughly 1,225,000 (Perkins, "Petroleum" 9). With the introduction of solar powered cars, this market would be virtually extinct, causing the sudden loss of millions of jobs, reflecting in a great economic setback.

The economy would also take a big hit based on the profit that was being made from its oil production. Alaska, alone, produced $3.3 billion in revenue for the 1997 and 1998 fiscal years (Perkins, "Trends" 13). Also, "The federal government receives royalties and other types of income associated with the leasing of federal lands and offshore areas to oil and natural gas producers" (qtd. in Perkins, "Trends" 13). For 1997 and 1998, the federal government produced a total of $355 million for onshore leasing, and $510 million for outer continental shelf, OCS (offshore), leasing (Perkins, "Trends" 13). The on and off shore wells (approximately 436,000 total), each yielded 11.3 barrels of crude oil per day or 4,926,800 barrels total, which was roughly 25% of the nation's needs (Perkins, "Production" 4). In 1998, the US yielded roughly 32% profit per each barrel of oil, or $11 per barrel. At a 63% usage of oil for automobiles alone (Perkins, "Production" 6), the profit generated would greatly attack the heart of the oil industry, which would directly affect the nation's economy.

Imports and exports are another important factor, which would cause a setback in US economy. "The outlook for U.S. suppliers of goods and services to Venezuela is for continued expansion of sales during 1998. With $10.2 billion in imports in 1997, Venezuela is the fourth largest market in the Western Hemisphere" (qtd. Lindow 26). While the US government is profiting from the oil exported to other countered, it is also profiting from the oil imported. While 25% of the nation's needs are provided by internal wells (Perkins, "Production" 4), the rest is imported from other countries – mostly, the Middle East and Indonesia (Perkins, "Production" 4). For each barrel imported from the Middle East, $2 of profit (per barrel) is made, and for each barrel imported from Indonesia, $6 of profit (per barrel) is made (Perkins, "Production" 4, Figure 3). Therefore, since the US needs 17 million barrels of oil/day and can only produce 4.9, the rest is imported. At an average of $4 profit per imported barrel, 12 million barrels/day gets to be quite a sum of money. 65% of which would be virtually eliminated with the introduction of solar powered cars, through the elimination of the need for gasoline for automobiles.

Even though the introduction of solar powered cars to the nation's economy may have certain positive, long-term effects, such as the creation of new jobs in a new industry, and even cut down the average consumer household expenses, its short-term effect would be devastating. The introduction of solar powered would virtually abolish the oil industry, causing a domino effect in the economy. Hundreds of thousands of jobs would be cut. Business owners and governments involved in the oil industry would have profits dropped overnight. Its effect would be devastating to an economy, which derived a great amount of profit from the selling and mining of oil, to meet its consumer's needs for mass transportation.

Effects of Solar Powered Cars on the American Economy. (2021, Oct 31). Retrieved from http://envrexperts.com/free-essays/essay-about-effects-solar-powered-cars-american-economy 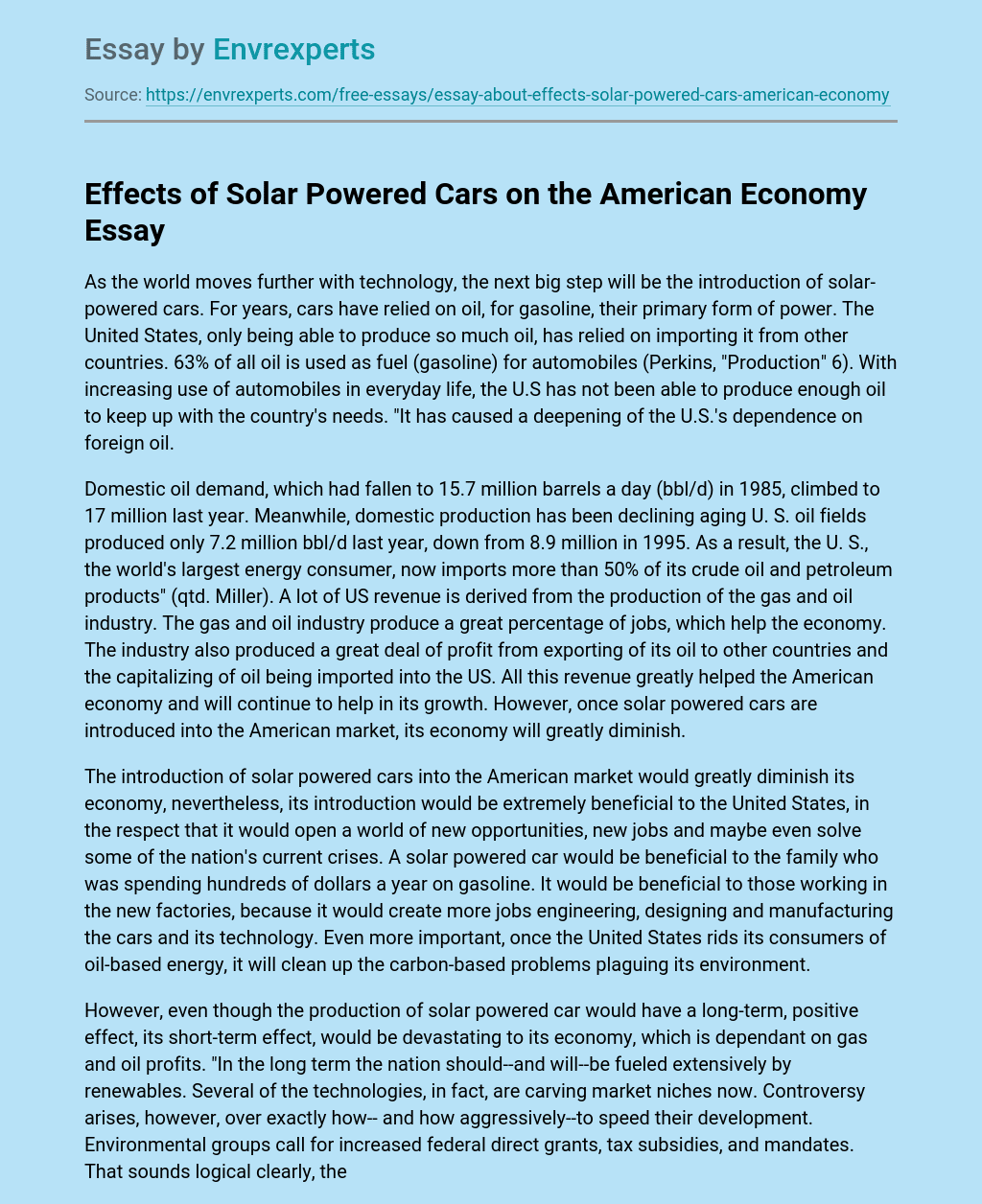