Electricity in Malaysia and Environment Problem

Don’t waste time
Get a verified writer to help you with Electricity in Malaysia and Environment Problem
Hire writer
$35.80 for a 2-page paper

Since the use of sources like natural gas, fossil fuel and coal Malaysia which lead to carbon footprint. This process was used for the past few decades that contribute in the global warming , ozone depletion that now leading to the climate change. In order to slow down the effect of energy production to the environmental is by implementing the renewable energy as the primary sources.

In this paper, the proposed alternative reserve provider is the renewable energy sources. This proposed alternative not only provide the energy security to Malaysia electricity but it is parallel to Minister of Energy, Science, Technology, Environment and Climate Change Puan Yeo Bee Yin that quoted “Green energy will be a new frontier for growth in Malaysia.

The science and technology industry is an untapped market, which I believe can help the nation move up the value chain to come out of the middle-income trap” MESTECC also hopes to develop Malaysia into a key player in the ASEAN green energy industry. Why renewable energy were chosen? “It’s a definition that if it’s not renewable, it’s going to run out at some point.

And we will have the choice of the collapse of civilisation— and into the Dark Ages we go—or we find something renewable” quoted by Elon Musk the Ceo of Tesla. Based his quote it means that anything and the world especially the energy sources will run out at some point if its not renewable for long time. That being said, Malaysia current demand that being supplied by oil product and fossil fuels is detrimental in addressing the issue of global climate change which why Malaysia should move forward toward renewable energy sources. Based on Malaysia weather the feasible renewable energy that can be implement is including biomass, biogas, mini-hydroelectric, and solar PV[1].

In moving towards green energy that is appropriate with main objective of sustainable Malaysia energy is that Malaysia are able to reduce its carbon intensity by 40% by increasing the usage of solar PV and other type of renewable energy as the primary energy sources[2]. Although, renewable energy production in Malaysia has not yet reached grid parity, however it is achievable by 2025 and undoubtedly in 2030 stated by Minister of Energy, Science, Technology, Environment and Climate Change[1]. Another idea, why renewable energy is preferred instead of other alternative like nuclear power because, first the public disagreement about the nuclear power since there is a number of tragedy that happen relating with the nuclear power. For instance, the most recent case is Fukushima, Japan, March 2011, it started when the earthquake and tsunami that struck Japan on March 11, 2011, leading to a serious accident at the Fukushima Dai-ichi nuclear power plant on the north eastern coast of Japan. Chernobyl, Ukraine (former Soviet Union), April 26, 1986, It through the sudden surge in power during a reactor systems test resulted in an explosion and fire that destroyed Unit 4[3]. As a result of the disaster, approximately 220,000 people had to be relocated from their homes. A few years back, when there was rumoured that Malaysia are going to use nuclear power, has caused an uproar among the public that against the used of nuclear power as Malaysia’s energy source. In addition, constructing nuclear power is highly expensive to produce. Due to that, nuclear was not considered as Malaysia’s alternative energy.

Next, in moving toward renewable energy MESTECC also focusing on reforming and restructuring the renewable market for more efficiency Even though, there is a few challenge in progressing to renewable energy, Malaysia’s can learn from other country in breaking the dependency on fossil fuels. One of the country that accomplished in breaking the dependence on fossil fuels is Sweden. Last 40+ years, Sweden have increase their energy efficiency by cutting the energy dependency on natural gas and fossil fuels. Not only that, this Scandinavian country to the east of Norway and Denmark all while promoting the development of viable markets for new, renewable and environmentally friendly energy sources. Sweden also introduced the carbon dioxide tax since 1991 and in 2017 its carbon dioxide emission has decreased more that 25%. The Ambassador the stated that this is proof that carbon dioxide emission reductions can truly work with economic growth[4]. Despite the Minister of Energy, Science, Technology, Environment and Climate Change has clarified last year that no plan of charging carbon charging but maybe this method can be considered in the future[5].

Therefore, the decision in using the solar PV is the most suitable in enabling the renewable energy source as the alternative energy in Malaysia. On the other hand, Ir. Abdul Rahim Ibrahim, Senior Director of Industry Planning and Development in Energy Commission specify that the solar power has its constraint where the generation of energy only effective during day as well lasting between four to five hour a day assuming that it is not raining[1]. Thus this imply that solar power is very dependent of the weather. Prior to this, Energy Commissions incorporated with the Single Buyer and Grid System Operator in appointing a consultant to do research about the influence of the penetration of solar energy into the Peninsular Malaysia and Sabah power systems. Due to the intermittency factor, the analysis is geared to determining the stability issue. It was discovered that if solar photovoltaic energy penetration is at 15 percent of peak demand, the activity of the device would not have a major impact. The peak load capacity would be equal to the peak load capacity at night at 16 per cent during the daytime. The grid system can fell below the stability concern zone at more than 30 per cent[1].

On the other, it is crystal clear that renewable energy particularly the solar energy, does the job in reducing the carbon dioxide footprints, as well as minimizing the greenhouse effect. However, renewable energy also has its cons where it also impact the environmental in developing the renewable energy sources. Consideration must be provided to adverse environmental impacts when designing strategies for building solar power systems. In order, to develop the utility -scale solar generation require with a substantial land, that depend on few factors for example technology adopted, the topography of the available site and solar intensity at the site. Researched by NREL on the solar power plants that a wide range of total land use requirement for different technologies. The design of utility-scale plants often makes it hard for other uses, such as agriculture, to share this land. It is also important to remember that solar power on a utility scale has estimated lifetimes of 30-60 years. Researcher in China found that in establishing the solar plant it also effect the soil quality. As consequence, lead to soil erosion and an curtail the soil temperature by 0.5-4.0°C in summer and raised the soil temperature in winter. Despite this unfavourable effect the utility-scale solar can be diminish by locating the plants in brownfield locations. Installing small-scale PV may cause minimal land impact actively integrated into buildings and structures they serve.[8]

As a conclusion, the resolution of the Minister of MESTECC in concentrating in renewable energy as the energy sources in the energy source mix in Malaysia, does actually provided more benefits to the environmental and society in the long run. The current dependency of the coal, natural gas and fossil fuel is neither good for the energy security for the environment in the future. Therefore, in order to make renewable energy represent 20 per cent of the nation\'s energy mix by 2025 is possible with the collaboration of Energy Commissions together with the Single Buyer and Grid System Operator as well as the consumer with more and enhance awareness about the advantages of the renewable energy and how it affect the climate change globally.

Electricity in Malaysia and Environment Problem. (2021, Oct 31). Retrieved from http://envrexperts.com/free-essays/essay-about-electricity-malaysia-and-environment-problem 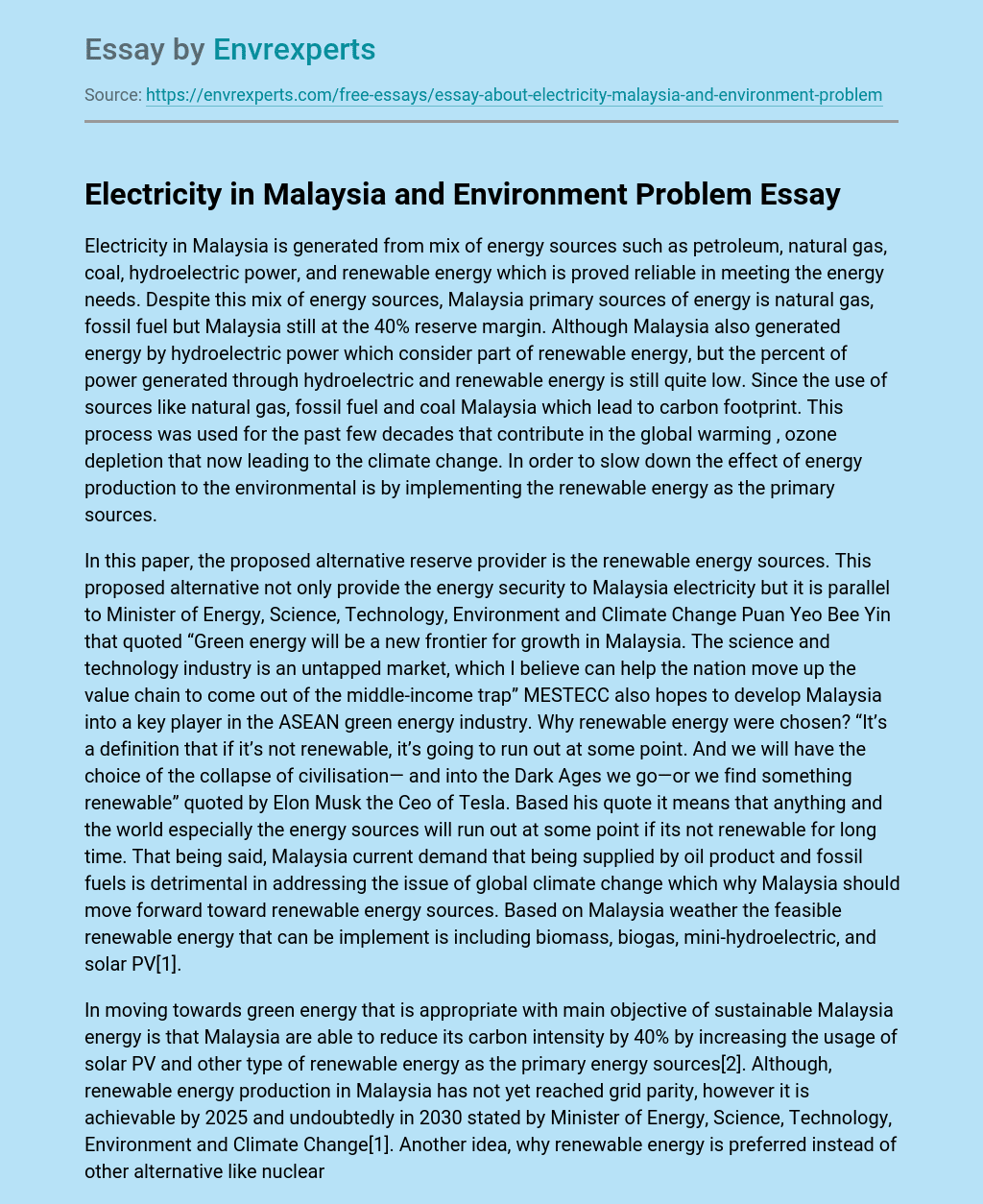