Fossil fuels are the non-renewable and conventional source of energy formed over the millions of years ago from the buried, fossilized remains of plants and animals. They have high carbon content. Coal, oil and natural gas are all considered as the fossil fuels. Today more than 70 percent of the world’s energy is produced by fossil fuels. The process of producing energy from the fossil fuels involves the combustion of fuel which generates the heat energy which boils the water and produces stream.

Don’t waste time
Get a verified writer to help you with Electrochemicals: Chemical Potential Energy
Hire writer
$35.80 for a 2-page paper

These stream from water increases in pressure and spins the turbine. The turbine rotates the magnet enclosed in high speed generator and then electricity is produced. This process basically involves conversion of mechanical energy to thermal energy and the finally to electrical energy.
Though it produces major amount of energy, it has some disadvantages and have huge impact on environment. The fossil fuel has adverse effect on the climate change.

Combustion is a reaction with oxygen. During combustion of fossil fuels, the hydrocarbon molecules are converted into carbon di oxide and water and produces huge amount of heat. The reaction is
CxHy +O2 === CO2 +H2O
These production of large amount of carbon di oxide as byproduct traps the heat in atmosphere and it leads to climate change causing global warming. It also pollutes land, water and air due to the harmful pollutants emission from fossil fuel burning. These factors have led to alternative sources of energy which should possess higher efficiency than diesel or gas engines.

It should also eliminate pollution caused by fossil fuel burning and should be simple compared to conventional energy sources.
Fuel cells is one such device which possess major advantages compared to conventional energy conversion technologies such internal combustion engine or batteries. Compared to combustion engines, fuel cell efficiency is higher and can be used for decentralized power generation. It also promises low emission as fuel cell works mostly on hydrogen and oxygen. So, it also eliminates the Greenhouse gas effect. The fuel is extremely simple and operates without any moving parts which tend to exhibit longer life. Operating times are much longer than batteries which can be increased by increasing the amount of fuel. Various size and weights of fuel cell helps them in variety of applications compared to conventional energy conversion technologies.

A fuel cell is an electrochemical device which converts the chemical potential energy which is stored in molecular bonds of fuel into direct electrical energy. The main part of fuel cell is the proton conductive membrane. In Membrane electrode assembly, the membranes are placed between the electrodes. The electrodes must be porous because the gases from cathode and anode must reach the interface between electrode and membrane where the electrochemical reaction takes places at the catalyst surface. The membrane electrode assembly is placed in between the collector plate where they collect electrons and conduct electric current and separator plate where they separate gases from the adjacent cells. The bipolar plates are the plates which is used in multi cell configuration provides the pathway for gas flow where cathode of one cell is connected to anode of another cell.
The electrolyte membrane is the main component of fuel cell, where other components are designed according to the fuel cell. The stability, lifetime and efficiency of fuel cell depends on the type of electrolyte membrane. The main function of membrane is to act as electrolyte between the anode and cathode for conducting ions and it also separates reactant gases of fuel cell. The proton conducting membranes must ensure the properties like high conductivity, high water uptake capacity, low fuel crossover, good mechanical strength, chemical and thermal stability. The membrane should be cheaper and suitable for all fuels.
There are various types of fuel cell based on electrolyte and operating temperature. Table 1 explains the general classification of fuel cells. \nPolymer electrolyte membrane fuel cells (PEMFC) is a type of fuel cell in which protonic conductive polymer-based membrane is used as an electrolyte. It is known for its simplicity, fast start ups and operation at low temperature. During the operation of PEMFC, the hydrogen molecules which passed in anode region splits into hydrogen ions and electrons in the presence of catalyst (Pt). The hydrogen ions pass through the membrane and electrons moves through the external circuits and reaches the cathode. In cathode region, oxygen is passed and it reacts with hydrogen ions and electrons to form water.
Anode: H2 2H+ + 2e-
Cathode: ½ O2 + e- +2H+ H2O + Heat 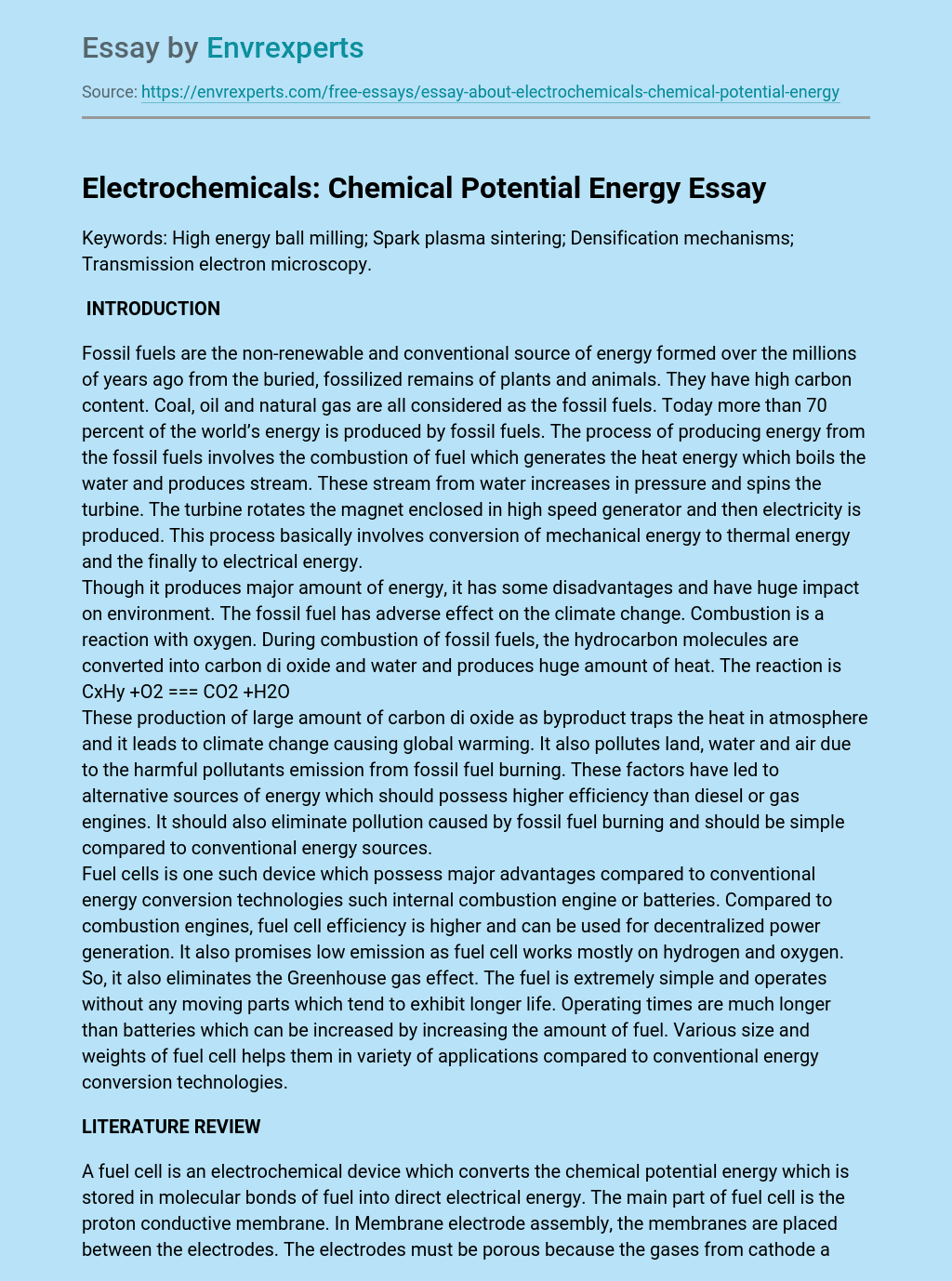