These animals were actually once thought to be extinct, but for the last thirty years, they have been coming back. There are nearly 300 Black-Footed Ferrets in North America, and they are one of the most endangered species there. Their main habitat is grasslands in the Northern Great Plains. They are the only ferret native to North America.

This is the only penguin species north of the equator and in the Galapagos.

Don’t waste time
Get a verified writer to help you with Endangered Species
Hire writer
$35.80 for a 2-page paper

There are only about 3,000- 8,000 left. They are in danger from pollution, bycatch, and climate change. Introduced species carry diseases that can spread to the penguins, and cats pose a predator threat.

There are 4 African species of Pangolins. They can be found in woodlands and savannas within reach of water. Their life span is estimated as about 20 years. Their scales, which are made of the same material as our hair, take up 20% of their weight.

Pangolins are insectivorous, they mainly eat insects. Their predators are leopards, hyenas, and humans. Humans hunt them because of belief in pangolins’ magical/curative properties and a demand for their meat. When their scales are mixed with bark from certain trees, the scales are supposed to neutralize witchcraft and evil spirits. Some people say the smoke from their scales improves cattle health, keep lions away, and cures nose-bleeds.

This mammal is carnivores, and when found in a group, that group is called a pod. A blue whale’s average life span is 80-90 years. They usually are about 82- 105 ft., and can weigh up to 200 tons. Although blue whales are endangered, their current population is increasing. These whales are the largest animals ever to have lived on earth. they mostly have a diet of tiny shrimp-like animals called krill. Sometimes they can eat 4 tons of krill a day.

"Elephants are an important cultural icon in Asia. According to Hindu mythology, the gods (deva) and the demons (asura) churned the oceans in a search for the elixir of life so that they would become immortal. As they did so, nine jewels surfaced, one of which was the elephant. In Hinduism, the powerful deity honored before all sacred rituals is the elephant-headed Lord Ganesha, who is also called the Remover of Obstacles."(https://www.worldwildlife.org/species/asian-elephant) Asian Elephants are extremely sociable, and they form groups of 6 or 7, later to join other groups and become a herd. "More than two thirds of an elephant’s day may be spent feeding on grasses, but large amounts of tree bark, roots, leaves and small stems are also eaten. Cultivated crops such as bananas, rice and sugarcane are favorite foods. Elephants are always close to a source of fresh water because they need to drink at least once a day.“(https://www.worldwildlife.org/species/asian-elephant).

Chimpanzees live in social communities with several dozen animals, and usually live in African rainforests, woodlands, and grasslands. They normally walk on all fours, but chimpanzees can also stand and walk upright. By swinging from branch to branch they can also move pretty quickly in the trees, where they do most of their eating. Chimpanzees mostly sleep in the trees as well, using nests of leaves. They are usually fruit and plant eaters, but they sometimes also consume insects, eggs, and meat. “They have a tremendously varied diet that includes hundreds of known foods.” (https://www.nationalgeographic.com/animals/mammals/c/chimpanzee/)

“Because incubation temperature of turtle eggs determines the animal’s sex, a warmer nest results in more females. Increasing temperatures in Queensland’s north, linked to climate change, have led to virtually no male northern green sea turtles being born.” (https://www.worldwildlife.org/species/green-turtle) These turtles graze on seagrasses and algae, and like mowing a lawn, they keep the seagrass healthy by doing so. Uncontrolled coastal development, vehicle traffic on beaches, and other human activities have directly destroyed or disturbed sea turtle nesting beaches around the world.

Snow leopards play a key role as both top predator and as an indicator of the health of their high-altitude habitat. If snow leopards thrive, so will countless other species. Length: 2-5 ft. Habitats: cold high mountains Snow leopards are found in 12 countries—including China, Bhutan, Nepal, India, Pakistan, Afghanistan, Russia, and Mongolia. A long tail gives balance and also wraps around the owner of the tail while they are sleeping. 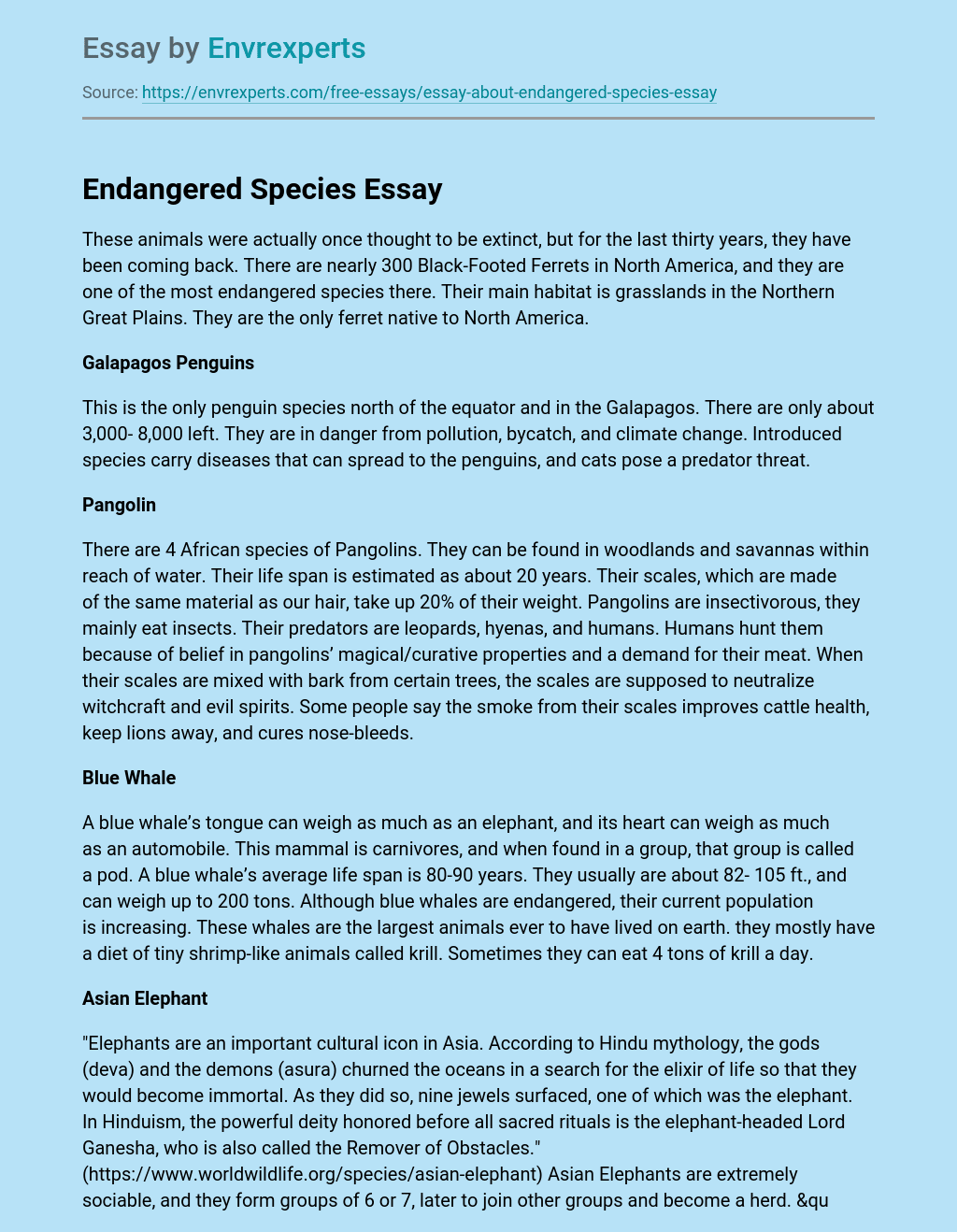