Zoos have always been a place of tourism where the public can go learn more about wildlife. According to Randall L. Eaton, President of the Orca Society at the University of Washington, zoos are a place of recreation that strives to protect wildlife to the best of its abilities. However, they have been under speculation on whether they’re a haven for animals or a danger to them, therefore creating a debate on whether they should promote zoos to protect endangered species.

Don’t waste time
Get a verified writer to help you with Endangered Species: Hazard of Zoos
Hire writer
$35.80 for a 2-page paper

The Association for Zoos and Aquariums (AZA) say zoos contribute to the economy greatly, which would lead to more zoos opening to protect endangered species. Meanwhile, PETA, a nonprofit organization for the ethical treatment of animals, states funds made from zoos go to adding gimmicks instead of improving animal conditions causing zoos to unable to complete their mission to protect wildlife. These opposing views spark the economic standpoint of the conversation surrounding the zoo debate.

The Marine Mammal Commission, an independent agency of the U.

S. Government, agrees with the AZA by saying, “Studies have shown that certain species of marine wildlife, including whales and dolphins, are increasingly important drivers of economic growth for tourism and related industries.” Thus, creating the point that zoos don’t entertain the public, but also contribute to the economy. The Toronto Zoo released its 2010 reports showing that they contributed over 600 jobs to Toronto and $35 million in labor income. Also, the San Diego 2016 report states, “14,680 San Diegan jobs and .

7 billion in economic activity is connected to San Diego Zoo Global through operations, attracting visitors, and all the associated activity throughout the region. This marks a 48% increase in jobs and a 42% increase in economic activity from the results of the 2013 report.” This proves that promoting zoos to protect endangered species would lead to a vast overall growth of the economy since more animals being placed in zoos contributes to more jobs being created for these added animals. The economy benefits from zoos, which would lead to more zoos opening to further provide to the economy. With the economic success that zoos bring to the table, they (zoos) may also be able to support local tourism in their community.

The American Humane Association, a nonprofit dedicated to ensuring the safety and welfare of animals, states, “In more than a few cities, zoos and aquariums serve as the main driver of tourism dollars, bringing people into town, who then spend money at other establishments.” This idea is supported by a study done by the AZA that concludes, “People who visited zoos and aquariums spent an additional $2.4 billion before and after their visit at surrounding businesses.” Therefore, the impact made by zoos also is included in revenue that surrounding businesses contribute to the economy. This money can be used to build infrastructure in the community to help better themselves. For example, according to the Chattanooga Zoo in Tennessee, “The Aquarium attracts more than 700,000 visitors to downtown Chattanooga, many of whom bring to the city out-of-town dollars that local businesses may not otherwise earn. These dollars contribute $6.3 million in taxes to help sustain essential services in the community, like funding for roads and schools.” The money made from these zoos not only helps the communities they’re in but essentially adds to the state economy, which benefits the lives of the people who live there every day. Despite the benefits zoos have said to provide, Sally Driml, Roy Ballantyne, Jan Packer, from the University of Queensland who has expertise in tourism, mention, “A concerning issue with Economic Impact Analysis (EIA) is that many EIAs give results for one year, without being explicit about how long impacts are expected to last.

New tourism attractions should not be assumed to provide continuous positive impacts into the future.” This would mean in the future that after these attractions have worn off, revenue won’t be made as steadily as when these attractions were first opened. They continued with an example, “For instance, the Giant Pandas at Adelaide Zoo generated a positive economic impact in their first year of residence, however, increased numbers visiting to see the pandas lasted only two years. Investment decision-makers expected larger, longer-term economic benefits than eventuated, and the zoo experienced financial difficulties.” Additionally, PETA has also stated, “The Wall Street Journal reported in 2003 that ‘nearly half of the country’s zoos are facing cutbacks this year… [a]ttendance, meanwhile, is down about 3% nationwide’.” In addition to the government cutting back funds, failed projects and low attendance may cause zoos to go into funds low enough to reach an inability to provide a natural habitat for animals to live in or provide sufficient supplies for animal welfare. This can raise public concern for the animals causing suspicion for whether zoos are the best solution to keep endangered species safe.

Zoos have shown themselves to carry different opinions on whether they should be promoted as a means to protect endangered species. According to David Hancock, from the Royal Institute of British Architects, who specializes in planning and gives exhibit ideas to zoos provides a solution that zoos should change the animal’s environment to resemble their natural habitat which will improve animal welfare.

This solution not only keeps zoos open to continue to contribute to the economy but also addresses concerns that PETA and other organizations may have. According to the American Humane Association, “Today, zoos try to mimic natural environments for the animals. Vegetation and open areas, combined with toys, climbing areas, and scent trails provide enrichment for the animals and an opportunity for visitors to see the animals engage in natural behaviors… The Bronx Zoo has the Congo Gorilla Forest, a 6.5-acre area mimicking a Central African rainforest complete with more than 15,000 tropical plants.” Some zoos are making an effort to change the animals’ surroundings to ensure that animals feel more comfortable in their environment, thus, improving how they interact with objects and people around them. Another example is the Feline Cage in the Woodlands Park Zoological Gardens. Park officials found that changing the environment to make it more like the cats’ natural habitat is inexpensive. Zookeepers collected things like sand, gravel, dried sagebrush, and more at no cost. The total cost to change the enclosure was about $200 to add house plants and visitors were also pleased to donate plants. This low cost shows to consider zoos as a means of protecting endangered species would not require extreme funds from the government, therefore being possible for all zoos to achieve. This solution is one way to contribute to the efforts of conservation towards animals. 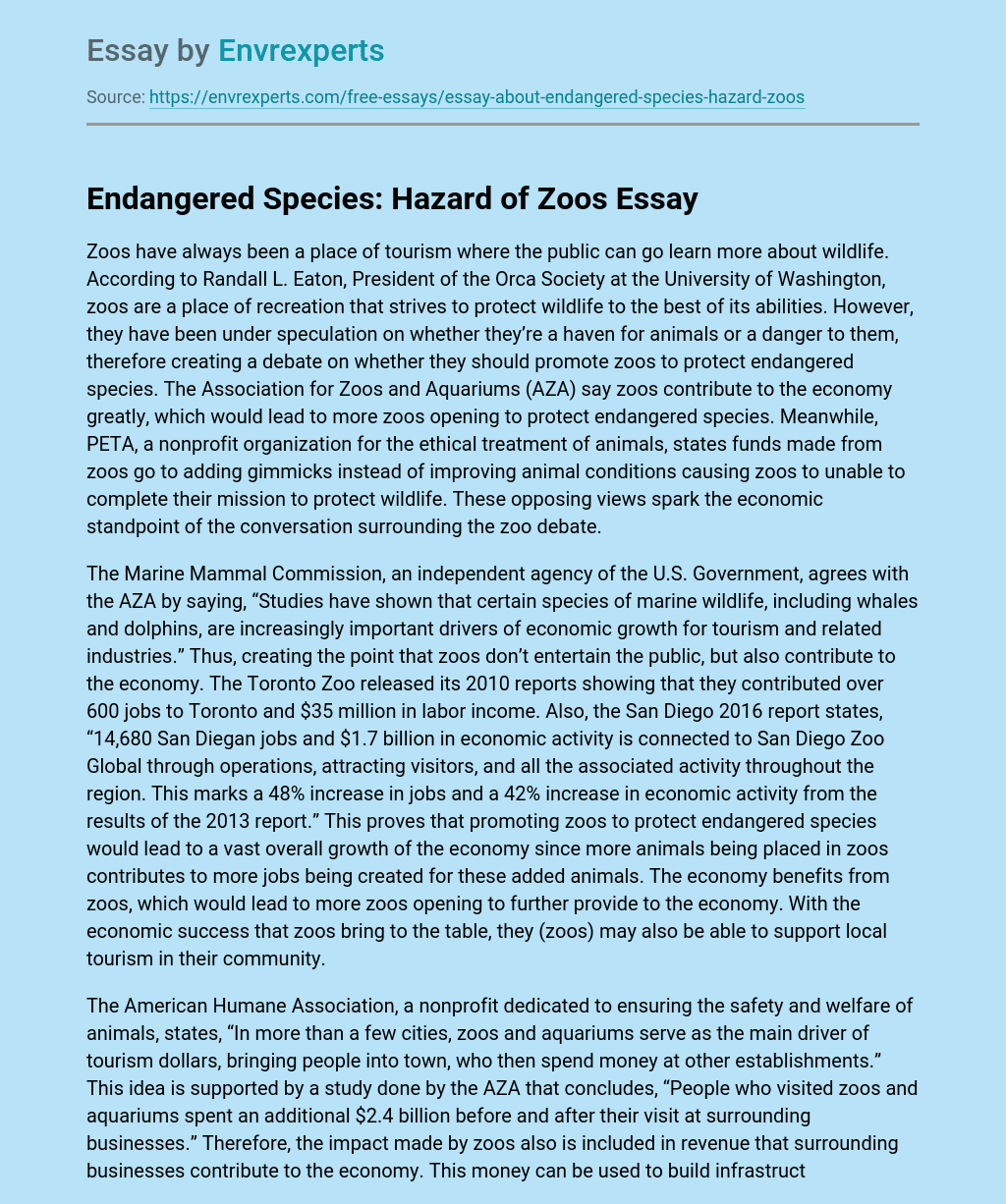