The manatee, also known as sea cows, is a large marine mammal that is a threatened species. The manatee has three different species including, The West Indian manatee, The Amazonian manatee, and The African manatee. A manatee can get up to 1,000 pounds and can live to be 60 years old or more. (savethemanatees.org) The manatee, which is its common name, is also referred to as Trichechus by scientists. Manatees within the United States are concentrated around Florida in the winter and in summer, they can be located as far as Texas and as far north as Massachusetts, but there are more sightings in Alabama, Georgia, and South Carolina.

Don’t waste time
Get a verified writer to help you with Endangered Species: Manatee or Sea Cows
Hire writer
$35.80 for a 2-page paper

The West Indian manatees are found in coastal and inland waterways of Central America and along north coast of South America. Typically, manatees are in rivers, seas, and oceans. (savethemanatees.org)

They can live in salt, fresh, and brackish waters and their biomes are only found in marine and freshwater biomes. (seaworld.org/animals/all-about/manatees/habitat) Since the manatee was once an endangered species there is not a great amount of them, therefore there is only about 13,000 of them left.

Manatees are considered herbivores but sometimes they ingest small fish along with their normal diet. Manatees that live in the sea prefer sea grasses and manatees that live in rivers eat freshwater vegetation and eat algae. The main predator manatees have is humans. Most human-related manatee deaths happen from collisions with watercrafts. Other human-related caused manatee deaths are from ingesting fishhooks, trash, and getting tangled in crab trap lines.

Manatees are pregnant for about a year and one calf is born every two to five years and twins are rare. The calf remains dependent on its mother for the first two years. (savethemanatee.org)

The manatee is not a territorial animal and often swim alone or in pairs. When seen in a group it is either a mating herd or an informal meeting of the species. A group of manatees is called an aggregation that usually never grows more than about 6 individuals. (livescience.com/27405-manatees.html) A manatee is a mammal, therefore they must come to the surface to breathe air. Manatees can swim up to 20 miles per hour in short bursts and when using a great amount of energy, they must come up to the surface as often as thirty seconds.(savethemanatees.org) The whiskers on a manatee’s face, also called vibrissae, are used to sense the world around them. The whiskers on a manatee’s face are modified to capture and handle food and other objects. The whiskers help manatees feed on a variety of aquatic plants. (asknature.org)

The manatee is considered threatened because of habitat loss and collisions with boats and ships. When new development occurs along waterways, destroying their habitats, sewage, fertilizer and other types of wastes enters the waterways and causes algae growth. Some of the algae that grows from these wastes are toxic and kill manatees when ingested. Manatees feed on sea grass that is in shallow water and because of that manatees spend a lot of time in shallow water which can lead to deadly boat collisions, since there isn’t enough room for them to dive away from the boats. (oceantoday.noaa.gov) The manatees are on a highly threatened list and are facing a high risk of extinction. The manatee population is expected to decline by 30 percent over the next 20 years. (livescience.com)

The Florida Manatee Recovery Plan was developed as a result of the Endangered Species Act of 1973. In October of 1989 Florida’s Governor directed the state’s wildlife agency to work with thirteen key manatee counties to help reduce fatalities and injuries of manatees. They have developed boat speed zones to reduce the number of collisions with watercrafts and implemented manatee protection plans. (savethemanatee.org) It is important we work to try and save these animals from becoming extinct. Manatees play an important role in the environment by keeping sea grass short which helps maintain the health of the sea grass. (oceantoday.noaa.gov) Once they are gone you cannot bring them back. Is extinction what it is going to take for people to start caring and stop destroying their homes? If we do not start caring now, the population will keep on declining until extinction. Manatees help an oceans health and without them the ocean would not be healthy. Change needs to happen and happen quick. 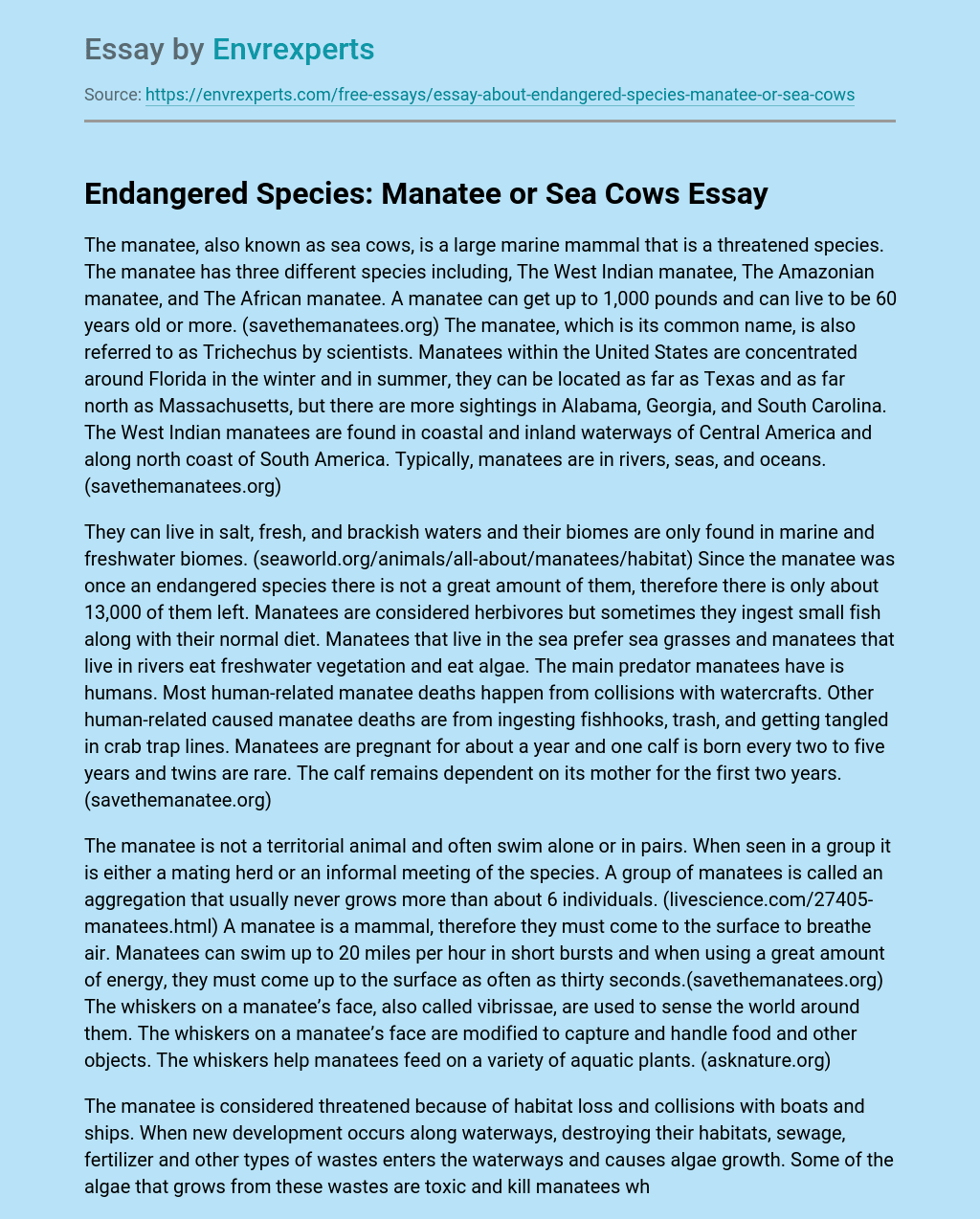