The evolutionary history of primates can be traced back 65million years. One of the oldest known primate-like mammal species, Plesiadapis, is small terrestrial mammals (Primatomorpha), which adapted to living in the trees of tropical forests . Primates are divided into two distinct suborders. The first suborder is called Prosimii (lemurs, lorises, and tarsiers) and the second is Anthropoidea (monkeys, apes, and humans). These primates can be found throughout Africa, Madagascar, India, and Southeast Asia. About 60% of primate species are threatened with extinction, including: 87% of species in Madagascar, 73% in Asia, 37% in Africa, and 36% in South and Central America.

Don’t waste time
Get a verified writer to help you with Endangered Species of Primates
Hire writer
$35.80 for a 2-page paper

Additionally, 75% of primate species have decreasing populations (Estrada et al,2017). According to Grubb (1998) the common threats to primate species include deforestation, forest fragmentation, and primate hunting for use in medicines, as pets, and for food.
The capped langur (Trachypithecus pileatus) is a species of primate in the family Cercopithecidae. It is found in Bangladesh, Bhutan, India, and Myanmar(https://www.iucnredlist.org/species/22041/9350087). Study conducted by Das et al (2008) indicated that capped langur is threatened by habitat loss.

While, detailed information on the complete mitochondrial genome of Trachypithecus pileatus tenebricus subspecies is limited.
Molecular determination of sex and species is one of the key tools for determining and monitoring the social structure of wild and endangered primates. Human sequence is considered as the basis to develop traditional markers for molecular sex determination of primates and are often non-functional in distantly related primate species. Thus, developing markers that simultaneously detect Y- and X-chromosome specific sequences and work across many species is highly desirable. Moreover, Palle and Tina (2006) conducted study on Fast and non-invasive PCR sexing of primates: apes, Old World monkeys, New World monkeys and Strepsirrhines and they identified the UTX/UTY locus as the best candidate for a universal primate sexing marker. Mitochondrial 12S rRNA has proven to be a useful molecular marker for better conservation and management of the endangered species.
DNA from ancient organic remains has been extracted in several cases. Studies conducted by Higuchi et al (1984), and Paabo (1985) suggested that molecular cloning made it possible to obtain DNA sequences from such remains to address questions of historic, evolutionary, and taxonomic significance. Many researchers agreed that the power of ancient DNA from old museum specimens to answer questions about climate change, habitat loss and other stresses on surviving populations is highly noteworthy. This work aims, on molecular determination of sex and species, to sequence complete mitochondrial genome of Trachypithecus pileatus tenebricus and extract ancient DNA from museum skin samples. 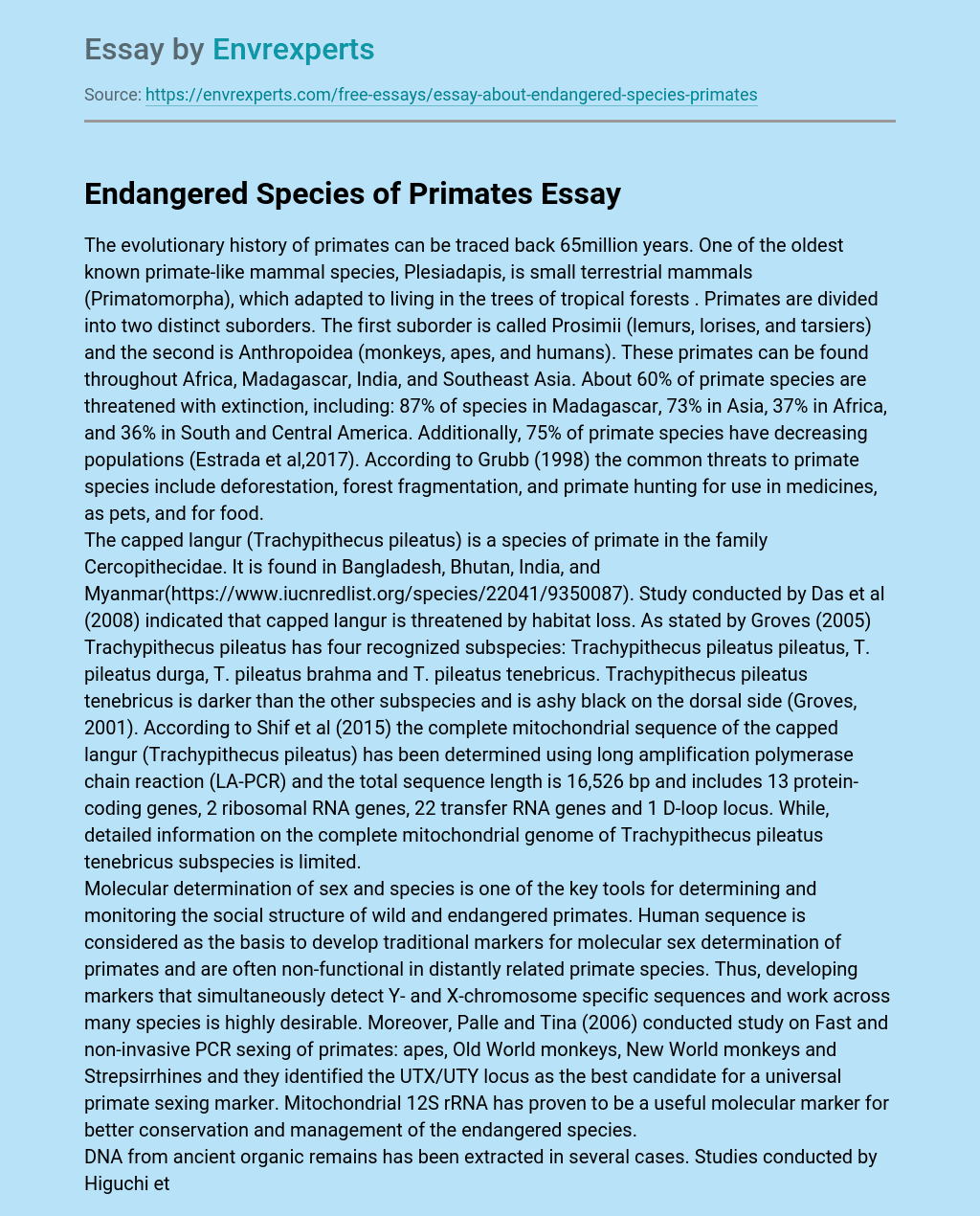