The continuously increasing demand of the electricity has made it necessary to come up with new and advance generation techniques that are different from the conventional and non -renewable type of electrical generation. The non- renewable methods of electricity generation needs fossil fuels which create a threat to the environment. It is because of this reason that new methods are being considered for generation of electricity.

Don’t waste time
Get a verified writer to help you with Energy Generation Flooring System
Hire writer
$35.80 for a 2-page paper

The generated electricity through the flash light will be stored in the battery which could be used for later purpose. The main objective was to reduce the overall cost of the electricity through floor tiling system for that purpose flashlight was used instead of using piezoelectric sensor.

The philosophy used in this research paper is that whenever a certain pressure is applied on the ceramic tile made up of piezoelectric type at a certain frequency ac voltage is generated through the principle of electromagnetic induction. This ac electrical energy is converted into dc voltage and stored in the battery system so that it can be used later on. This type of system has gained importance in the recent past because of its low cost implementation and user friendly. In this particular research paper a detail literature review is also done on these types of system.

Whenever the force is applied on the tile at a particular frequency to and fro motion of the spring which is attached with the tile of the generating system and with the flash light produces electricity by electromagnetic induction. This flash light which we will be using inside the tile system is attached to a mechanical part which produces the to and fro motion whenever a force or pressure of a particular frequency is applied on the tile system. The scope of this report is to focus on the electrical part of this type of generation system. The basic background knowledge which is required in this particular project is the fundamental principle of how electricity is generated, how it can be stored and on which principle the generation of electricity is based. The basic knowledge of rectification and battery storage system is also required.

The barrel which is located in housing has wire. This wire in the renewable energy flashlight is wrapped around the barrel. This coil is located between the housing and barrel of the renewable energy flashlight. Whenever the Barrel inside the housing is shaken a magnet which is disposed inside the housing of the barrel oscillates. Whenever this shaking of barrel is caused due to outside force an alternating current is produced in the coil according to the law of electromagnetic induction. The barrel which is enclosed in the housing has got two springs. These two springs are present at both ends of the barrel. These two magnets at either ends of the barrel cause the magnet to recoil when spring is strike against the magnet.

The working principle of flashlight is based on the electromagnetic law of induction which says that whenever a conductor cuts or being cut by a magnetic field an EMF is induced in it. The same working methodology works in electricity generation through tiling system using the flash light. Whenever a person walks on the tile a pressure or force is applied on the tile system. This flash light is installed below the tile; the force inserted on the tile produces to and fro motion which causes the conductor in the flashlight to move to and fro in a magnetic field which produces electricity.

The electricity generated is stored in the battery system which could be used for later purpose. The flashlight which we will be using is attached to a mechanical part but our focus in this report will be the electrical part and the working principle of the flashlight. This is the complete methodology which will be used in this project. Software/Hardware Experiment As discussed in the proposed solution part that we will be using a renewable energy flash light for the purpose of electricity generation through tiles. 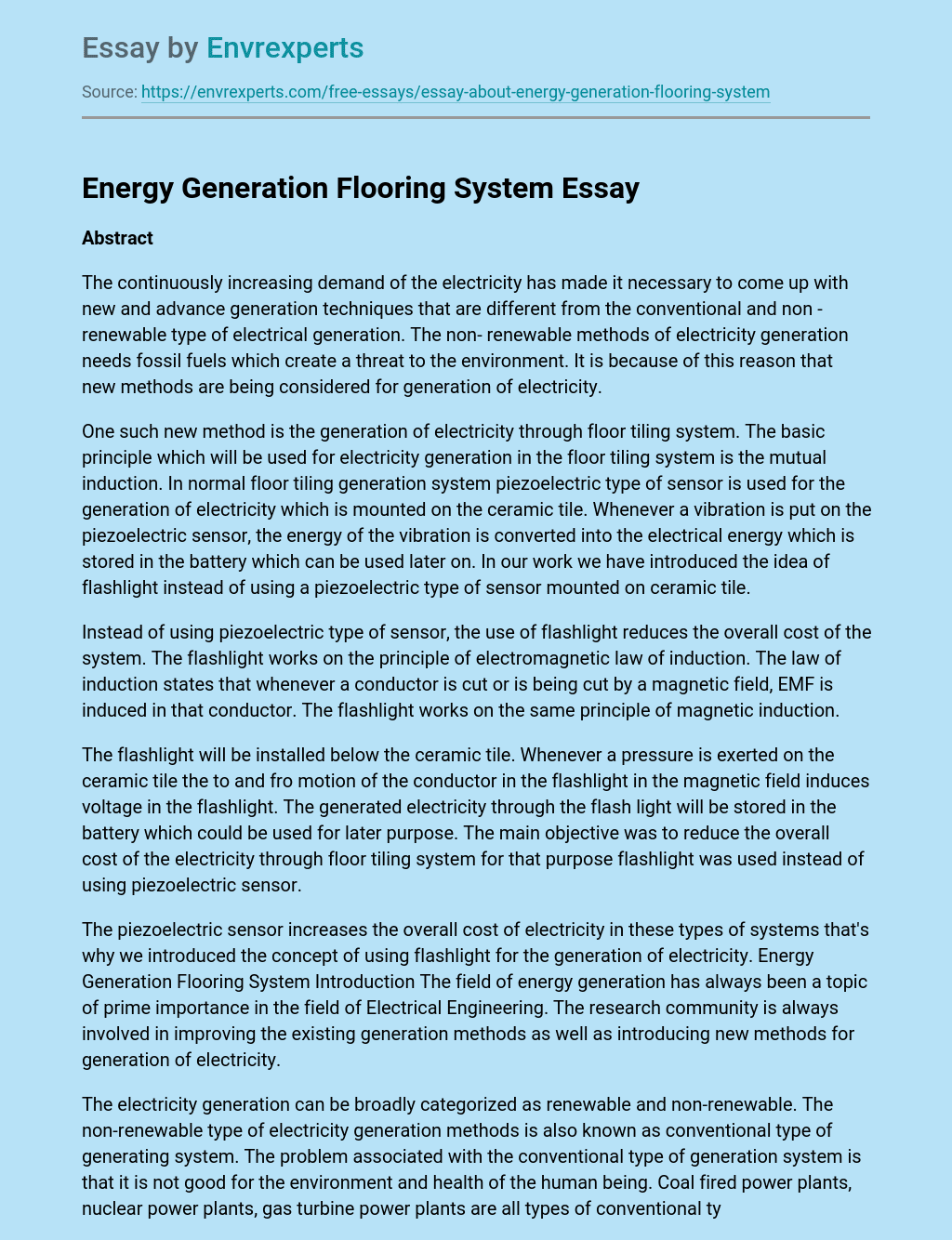