The primary national objective of Sweden is to "create a short- and long-term energy policy that will secure energy at fair rates for decades to come” (Jacobsson et al., 2009, p. 2143). The energy policy must provide adequate framework to provide efficient and sustainable energy and low costs. Furthermore, the energy policy must consider possible environmental impacts to protect the health of the citizens and the climate (Ibid).

The existing energy policy is centralized around the legislation of the European Union.

Don’t waste time
Get a verified writer to help you with The Energy Policy of Sweden
Hire writer
$35.80 for a 2-page paper

Although wind is a minor source for energy there is an importance because production and use has drastically increased in recent years.

Hydroelectric power produced 61 TWh of electricity in 2013 (Engstom & Uvo, 2015). Hydropower supplies nearly 50% of Sweden's total energy consumption (Ibid). With over 1900 power stations, hydroelectric power has proven to be a reliable source of local power. Despite the source's success, hydropower production rates have been at a constant level, with no increases, since 1981 (Ibid).

The plants do not produce harmful greenhouse gas emissions since energy is produced by running water through turbines (Egre & Milewski, 2002, p. 1228). The only true potential impacts occur as a result of constructing dams and power plants, potentially disrupting existing ecosystems (Ibid).

Wind power is an underutilized environmentally friendly source of power. Even when considering the construction and maintenance of wind turbines, the environmental impact is an absolute minimum, particularly when compared to fossil fuels (Anshelm & Simon, 2016, p. 1546). Arise, the largest wind turbine producer in Sweden, guarantees no carbon output and no harmful effects to the air, water, or ground (Anshelm & Simon, 2016, p. 1545).

Nuclear power provided 189 TWh of energy in 2013, approximately 35% of Sweden's energy supply (Karakosta et al., 2013, p. 194). Unfortunately, only 66 TWh of the produced 189 TWh was utilized as electricity, as the rest was lost during conversion (Ibid). There was an increase in the use of nuclear power in the 1970s, but production and usage has remained fairly constant since 1985 (Ibid).

Despite the stigma, nuclear power has a relatively low environmental impact considering there are no greenhouse gas emissions and waste is self-contained (Ibid). Nuclear power plants are also quite condensed, resulting in eco-friendliness because less space is utilized. The majority of stereotypes associated with nuclear power rest in infrequent catastrophic meltdowns, typically due to operator negligence (Andersson et al., 2013, p. 1054).

Fossil fuels supplied 167 TWh of energy to Sweden in 2013, approximately 8% of the overall energy (EIA, 2015). Fossil fuels is inclusive to oil products, natural gas, and coal product. The supply and use of fossil fuels has fallen significantly since the implementation of Sweden's renewable energy policy.

Coal provided an even smaller portion of Sweden's energy in 2012, measuring 1.563 TWh. Coal accounted for just 1.8% of Sweden's total energy use. Coal is inclusive to coal, brown coal, derived fuels, and peat (Kander & Stern, 2014, p. 59). Considering the scope of the category, Sweden uses a bare minimum of coal as an energy source.

Sweden's current energy use aligns quite well with the nation's energy policy objectives. In the year 2016, Sweden has accomplished the goals set to be accomplished in 2020. The nation is

ent on localized renewable energy, while reducing energy consumption and pollution. Considering the dedication of Swedish Parliament and the public, trends seemingly will continue in the same direction.

Sweden as an Influence

In 2013, Sweden was named as America's model for energy. President Barack Obama said, "… the work (Sweden has] done on energy is something the United States can and will learn from, because every country in the world right now has to recognize if we are going to continue to grow and improve our standard of living while maintaining a sustainable planet, we are going to have to change our patterns of energy use. And Sweden I think is far ahead of many other countries” (Koronowski, 2013).

Despite America declaring Sweden a model, there has been very little done to reflect the teachings of Sweden. In 2014, only 10% of energy consumption in America was attributed to renewable energy (EIA, 2014, p. 60). There has been a steady increase of growth in the wind and solar sector, but very little has been done in hydropower.

America should align energy policy objectives with Sweden's in order to create a sustainable future. Since President Obama's declarative statement, there has been no legislation enacted to implement Sweden's energy model here (Moniz, 2015). Without legislation pushing energy companies toward renewable options, the nation will continue digging a deeper grave by pursuing harmful nonrenewables.

The Future of Energy for Sweden

There has been a great deal of criticism around the viability of renewable energy production and use in Sweden. Despite astounding effort toward creating sustainable, localized energy, critics still exist. Essentially, renewable energy has been regarded as a "temporary solution” to the even larger issue of running out of energy entirely (Fridolfsson & Tangeras, 2013, p. 61).

Sweden will continue to have clean energy for decades, if not centuries. Currently, Sweden is producing supplementary energy when compared to the nation's consumption (EIA, 2013, p. 67). Exporting fossil fuels while drying up existing nonrenewable sites allows the profits to be used to reinvest in renewable sources of energy. By doing so, Sweden is continuously increasing supply while decreasing demand, therefore creating a surplus of energy. Even if Sweden were to eventually begin using nonrenwables again, temporarily using clean energy prolongs the supply of nonrenewable energy.

The Energy Policy of Sweden. (2021, Oct 31). Retrieved from http://envrexperts.com/free-essays/essay-about-energy-policy-sweden 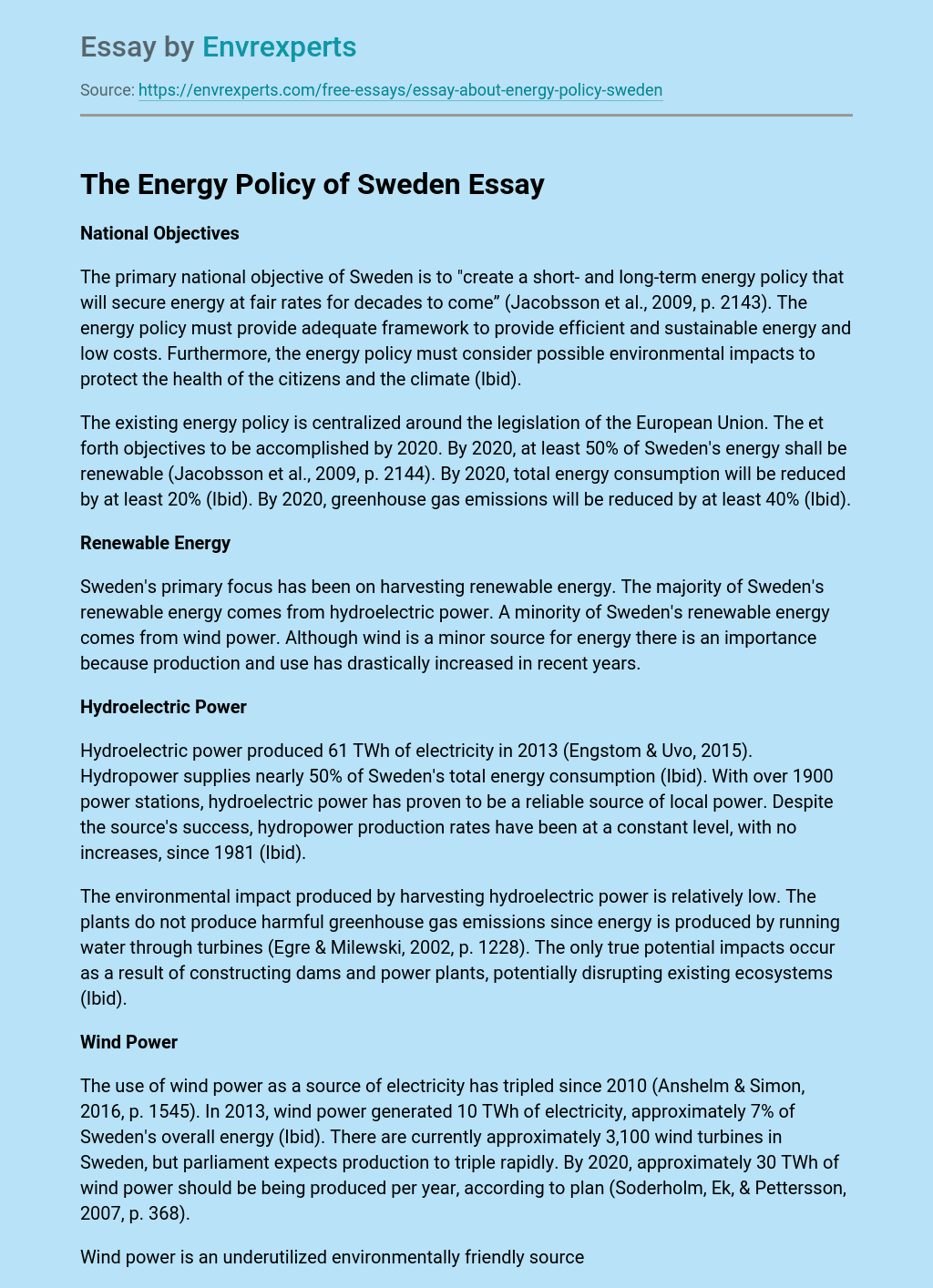