A key environmental challenge not only in the Central Valley but also in all of California is how to protect and preserve both the regions agricultural resources and its coastal boundaries. California is a unique state; we are basically a bunch of states/separate regions that are all encompassed under one defined boundary. We have a large coastline, industry, agriculture, mountains, forests, deserts, valleys, large and small cities, and major interstate trade and transportation systems. Two things distinguish our agricultural resources from others: our coastline, and our states geographic diversity in regards to other states.

Don’t waste time
Get a verified writer to help you with Environmental Challenges in Central California
Hire writer
$35.80 for a 2-page paper

As the state grows the question of where to put things is brought up. The pressures of urban sprawl in California have been evident for many years. The combination of California's growing environmental awareness, and its refocus on agricultural importance have prompted many policy tools to protect not only agriculture, but our coastlines as well.

Over the years, many policy tools have been proposed; some have been accepted and others for various reasons (political, economic, and other) have not.

This was proposed by offering property tax breaks for farmers and ranchers through a ten-year contract. This idea of protecting privately owned farmland from development for ten years through an agreement between the farmers, the county and the state, appealed to many. The popularity of this act is evident throughout California. In Kern County there is more than 1.6 million acres of agricultural related land (valley, foothills, mountains) currently under contract. Kern county represents grow, by 2020 population in the county is expected to double (Zapata 1). Kern County is important because it is a key agricultural area in California. Los Angeles and Fresno/San Joaguin Vallies grow closer each day. The area is a major supplier of oil and agriculture.

The Williamson Act appealed to many farmers, addressing the issue of raising property taxes, letting them continue to farm. Property taxes were a major concern to the farmers who were feeling the effects of sprawl, especially the smaller farmers. Under the Williamson Act, landowners tax savings could range anywhere from 30-70% depending on what their land is being used for and what commodities it produces. The Act saves farmers a lot of money, in Kern County a total of about 15 million a year. Under the agreement the state then reimburses the counties some of this revenue, about 5 million in Kern County (Mayer, Williamson 2). All of the agricultural lands in California are eligible for the Williamson Act. It does not matter if the land is in the path of development or not. It does not matter what the land is being used for (farming or grazing). The Act's objective is to protect agricultural lands on both the urban fringe and those elsewhere that may be the product of leapfrog development. The ten-year agreement between the landowners and the state renews itself each year automatically. Landowners have two options out of the agreement, cancellation and non renewal, both of which impose stiff penalties. The penalties amount to a predetermined percentage of the lands total market value. The main objective of the Williamson Act is to slow urbanization. The Act was not created to stop it; it was made to delay the inevitable.

The Williamson Act is both good and bad. It does indeed slow urbanization, but the areas that need the most attention (urban fringe) are not really impacted. The Act saves farmers money in the form of property taxes and it does compensate the counties, but this compensation does not balance what is lost. In Kern County the difference is 10 million dollars, money the county is simply out of. Another thing, a ten-year agreement may sound like a long time for the preservation of land but it is not. Is ten years to short? It probably is if the goal is the preservation of farmland (Mayer, Williamson 2). Some landowners even find ways to actually benefit from the act. A developmental powerhouse may receive the tax break for their ten years and when they fulfill their obligation they develop the land anyway. This of course is not the ideal situation but the act has done its job, slowing urbanization. There have been attempts to fix this problem of having it both ways. One such attempt is the recently passed Senate Bill 1182, nicknamed the Williamson Plus Act. This bill ads more tax breaks, up to an additional 35% if the landowner agrees to a twenty-year commitment. This would then also make the land off limits in the future to developers. Some counties adopted the policy before it was passed. Is farmland being converted? Yes, said Kern County planning director Ted James. Is farmland an important economic resource for counties? Very definitely (Mayer, Fence 1).

The Williamson Act does not stop the farmers from selling their land, because considering ones future usually takes precedent in the end. The act does enable farmers the ability to keep in business while saving our agricultural lands. The Williamson Act conserves agricultural space by addressing the issue with a temporary solution. In dealing with California's coastlines a more permanent solution was needed. Combating the pressures of both the preservation of California's coastline and the growing environmental awareness of California was and is still a major challenge. One area that focussed on this fact was the California Coastal Act. The California Coastal Act (California Public resources Code Sections 30000 et seq.) was first established by voters in 1972, and passed by state legislature in 1976 (Q and A 1). The main objective of the act is to provide long tern protection for California's 1,100-mile coastline. The Act is a partnership between the state (California Coastal Commission, and the local governments (15 coastal and 58 cities) to regulate both the conservation and the development of coastal resources through planning and regulatory programs (Permanent 1). This act stemmed from a coastal protection program that was passed on a temporary basis by California voters through initiative in November 1972, Proposition 20-The Coastal Conservation Initiative (Who We Are 1). The Coastal Acts policies and structure are based on input from the California Coastal Plan that was called for through Prop.20 and adopted by the Coastal Commission in 1975. Some of the major policies that influence the acts main objectives include; 1. The protection, enhancement, and restoration of environmentally sensitive habitats. 2. The protection of productive agricultural lands, commercial fisheries, and archeological resources. 3. The establishment, to the extent possible, or urban-rural boundaries and directing new housing and other developments into areas with adequate services to avoid wasteful urban sprawl and urban development (Permanent 2).

These policies and a few others must be included into each Local Coast Program (Q and A 2). Local Coast Programs (LCD's) are the planning tools that coordinate the efforts of both the state and the local government. LCP's are required to identify all aspects for coastal zones along the waterways. They are also required to include a land use plan and implementing measure (i.e. zoning). The LCP's reflect the imagination of the individual coastal communities as well as the structure of the Coastal Act and its policies. The coastal Act ensures its objectives are met or at least addressed with the Coastal Commission reviewing final LCP's. This whole process is a major system of checks and balances, neseccary red tape. Since the act was passed on a permanent basis in 1976, coastal development has continued, but it has been much more structured. This act has been a complete success. A great majority of coastal permit applications are approved, but many include stipulations to bring applications up to code with the regulations of the act itself. The act has prompted 70% of local coastal governments to have fully certified LCP's. (Q and A 3). This has also resulted in the fact that now almost all-coastal permits are issued locally. The act has achieved what it had proposed to do and so much more. Before the foundation to the act was established in 1972, the coast was vulnerable to unplanned development and environmental negligence. Now development is planned much better, more efficient and promotes themes and ideas in a long-term sense. More important are the unseen benefits from the act. Unseen achievements include: wetlands not being filled, coastal views not being lost to new homes, and coastal agricultural lands not being converted to other unnecessary uses. The Coastal Act stays important because California coastline is an important issue. It cannot just be saved; it needs to be constantly watched, protected, and addressed. After looking at the government's reaction to both protecting the states agricultural resources and its coastline, I am pleased with the overall efforts. I think that in terms of the Williamson Act, there are definitely changes that need to be made.

The Williamson Plus Act, which contains a twenty-year commitment, is a much better idea in regards to preserving agricultural lands and resources. I think that the original breaks on property tax need to be in effect, but something needs to be done to help counties make up for lost property tax revenue. There also needs to be stricter penalties in place to keep landowners from straying from their commitments. I feel the most important factor in the Williamson Plus is the fact that it then makes land off limits to development in the future. All in all, the original Williamson Act is a good foundation for the newer, stricter, more balanced version of the act. This is similar to what the Coastal Act was successful in doing. It was created and adapted from an earlier temporary initiative. Its policies and structure are drawn from prop 20's foundation and its development. The Coastal Act is an example of what the Williamson Act could eventually be. I think that the government is trying, but I think that the problem lies in Californians themselves. The Coastal Act works for the most part because it not only addresses one of California's most important features the coastline) but the idea behind it is so Californian in thought. The Williamson Act addresses two very important issues, agriculture and the environment. The Williamson Act also deals with the California farmer's dilemma of keeping their farms or selling them and then crying all the way to the bank.

The California Coastal Commission deals solely with the issue of the environment, a widely accepted policy issue here in California. I do think that the government is trying, and I think that these bills/laws are definitely more of a benefit than a hindrance. I hope that 25 years from now I'll be able to say 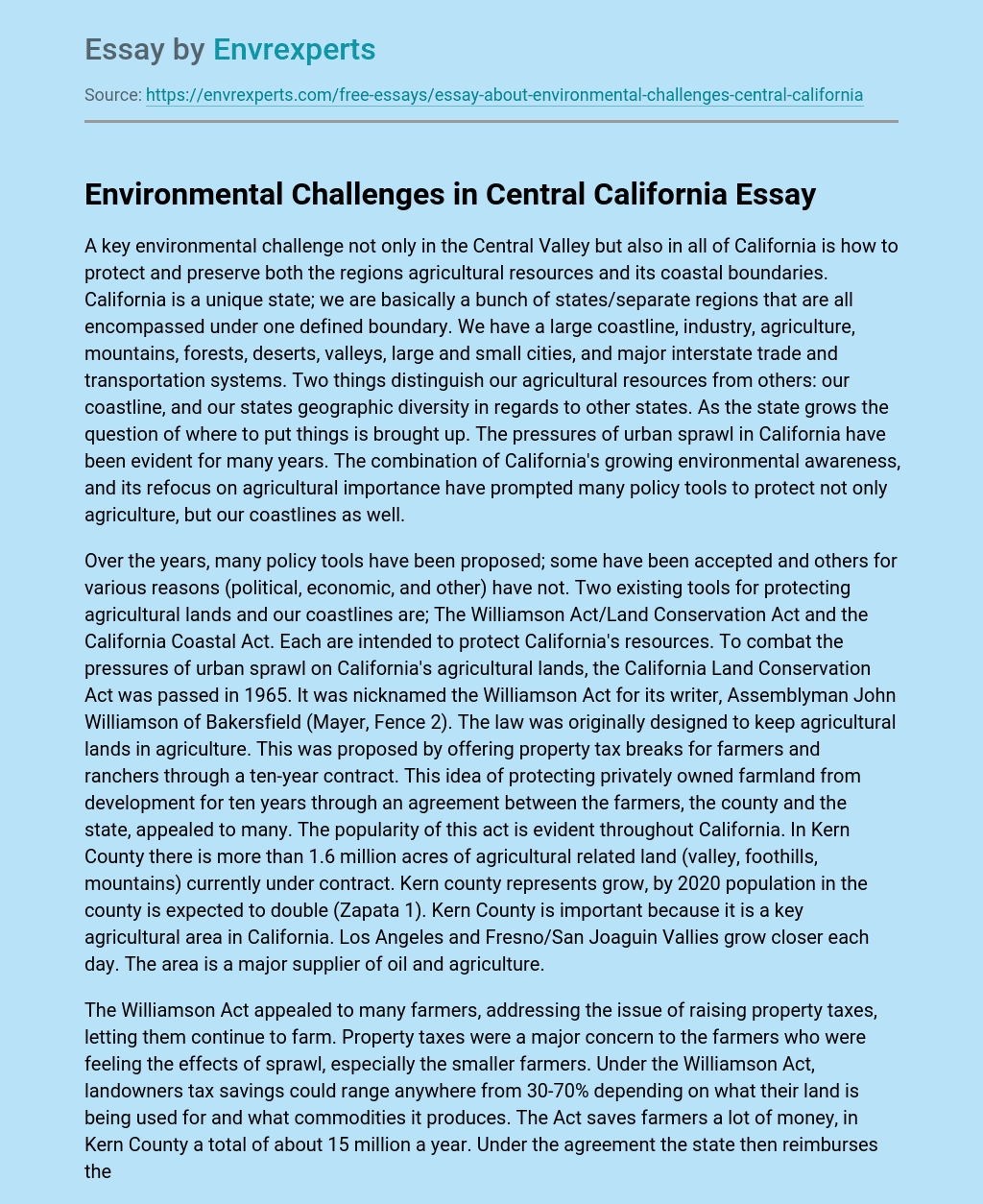