A Environmental Danger of Acid Rain in Europe and United States

In the last 10 years, the phenomenon known as acid rain has become recognized both in the United States and Europe as a major environmental danger. Acid rain has brought devastation to thousands of lakes and streams in the U.S. and Canada such as the Colorado Rockies. Some aquatic systems have become so acidic that they are effectively dead. In others, fish struggle to survive. Acid rain damage in the U.S. alone is estimated at more than $10 billion annually.

Acid Rain is one of the three most threatening environmental factors to water quality in Colorado; two more factors are mining and recreational development.

Don’t waste time
Get a verified writer to help you with A Environmental Danger of Acid Rain in Europe and United States
Hire writer
$35.80 for a 2-page paper

Once the water quality in Colorado is destroyed then that leads to impact the downstream rivers. The watersheds in Colorado supply 10,000,000 gallons of water daily to other states. This enables the pollution in Colorado to spread to across the country.

An ecosystem con only withstand a limited amount of acidity so if there is an excess of acids it can easily destroy an ecosystem's balance.

The problem is one of balance; nature depends upon balance. Normal precipitation reacts with alkaline chemicals – derived from the region's bedrock and found in the air, soils, lakes, and streams – and is thereby neutralized. However, if precipitation is more highly acidic, then acid-buffering chemicals can eventually become depleted. In this case, the buffering effect will no longer occur, and nature's ability to maintain balance will have been destroyed.

The species that provides the best indicator of environmental damage is fish.

Sulphuric acid in water can affect the fish in the lakes in two ways: directly and indirectly. Sulphuric acid (H2SO4) directly interferes with the fish's ability to take in oxygen, salt and nutrients needed to stay alive. For freshwater fish, maintaining osmoregulation is key in their survival. Osmoregulation is the process of maintaining the delicate balance of salts and minerals in their tissues. Acid molecules in the water cause mucus to form in their gills and this prevents the fish to absorb oxygen as well. If the buildup of mucus increases, the fish would suffocate. In addition, a low pH will throw off the balance of salts in the fish tissue. Salts levels such as the calcium (Ca+2) levels of some fish cannot be maintained due to pH change. This results in poor reproduction – their eggs produced would be damaged; they are either too brittle or too weak. Decreased Ca+2 levels also result in weak spines and deformities. For example, crayfish need Ca+2 to maintain a healthy exoskeleton; low Ca+2 levels would mean a weak exoskeleton. Another type of salt N+ also influences the well-being of the fish. As nitrogen-containing fertilizers are washed off into the lakes, the nitrogen stimulates the growth of algae, which logically would mean an increase in oxygen production, thus benefitting the fish. However, because of increased deaths in the fish population due to acid rain, the decomposition process uses up a lot of the oxygen, which leaves less for the surviving fish to take in.

We eat food, drink water, and breathe air that has come in contact with acid deposition. Canadian and U.S. studies indicate that there is a link between this pollution and respirator problems in sensitive populations such as children and asthmatics. Among one of the serious side effects of acid pollution on humans is respiratory problems. The SO2 and NO2 emmisions give rise to respiratory problems such as asthma, dry coughs, headaches, eye, nose and throat irritations. An indirect effect of acid precipitation on humans is that the toxic metals dissolved in the water are absorbed in fruits, vegetables and in the tissues of animals. Although these toxic metals do not directly affect the animals, they have serious effects on humans when they are being consumed. For example, mercury that accumulate in the organs and tissues of the animals has been linked with brain damage in children as well as nerve disorders, brain damage and death. Similarly, another metal, Aluminium, present the organs of the animals, has been associated with kidney problems and recently, was suspected to be related to Alzheimer's disease.

Children are more susceptible to health damages from acid rain because kids are more active outside than most adults. This means that they play in soil that is high in lead from tailings piles and they eat outside with these high lead levels. The children live in houses that are made with tailings as fill. A study in Colorado Rocky children proved this with a blood test showing extremely high lead levels in their bloodstream.

One of the main causes of acid rain is sulphur dioxide. Natural sources which emit this gas are volcanoes, sea spray , rotting vegetation and plankton. However, the burning of fossil fuels, such as coal and oil, are largely to be blamed for approximately half of the emissions of this gas in the world. When sulphur dioxide reaches the atmosphere, it oxidizes to first form a sulphate ion. It then becomes sulphuric acid as it joins with hydrogen atoms in the air and falls back down to earth. Oxidation occurs the most in clouds and especially in heavily polluted air where other compounds such as ammonia and ozone help to catalyze the reaction, converting more sulphur dioxide to sulphuric acid. However, not all of the sulphur dioxide is converted to sulphuric acid. In fact, a substantial amount can float up into the atmosphere, move over to another area and return to earth unconverted. The following are the stoichiometric equations for the formation of sulphuric acid: S (in coal)

Nitric oxide and nitric dioxide are also components of acid rain. Its sources are mainly from power stations and ehaust fumes. Like sulphur dioxide, these nitrogen oxides rise into the atmosphere and are oxidized in clouds to form nitric acid. These reactions are also catalysed in heavily polluted clouds where iron, manganese, ammonia and hydrogen peroxide are present.

The formation of acid mine drainage is primarily a function of the geology, hydrology and mining technology employed for the mine site. Acid mine drainage is formed by a series of complex geochemical and microbial reactions that occur when water comes in contact with pyrite (iron disulfide minerals) in coal, refuse or the overburden of a mine operation. The resulting water is usually high in acidity and dissolved metals. The metals stay dissolved in solution until the pH raises to a level where precipitation occurs.

EDF's scientific studies on acid precipitation are widely recognized as the leading edge of such research. EDF's experts were the first to demonstrate a direct link between industrial sulfur dioxide (SO2) emissions and distant acid rain. They have established that a national reduction in SO2 emissions exceeding 50 percent will lead to a proportionate reduction in acid deposition and effectively end damage to lakes and streams.

EDF's work was the first to bring acid rain to the fore as more than just an Eastern regional issue, when they showed that SO2 levels at Southwestern copper smelters corresponded closely with the levels of acid rain falling in the Rockies up to 1000 miles away. At the same time, they found serious health problems faced by asthmatics near the smelters.

On the basis of these findings, EDF sued the owners of the two largest Southwestern sources of sulfur pollution, in 1984. After a lengthy legal struggle, we prevailed in the closure of one environmentally outmoded copper smelter and compliance of the second smelter with clean air standards under a court-ordered agreement. As a further result, a new Mexican smelter 60 miles from the border is being fitted with pollution abatement equipment. These combined actions will remove more than 975,000 tons of SO2 annually from the air of the Rocky Mountain West, effectively ending the threat of acid rain damage in the region.

The federal government remains deadlocked on implementing such measures to control acid rain in the rest of the nation, even though last year, for the first time, the President belatedly cited acid rain as a severe environmental problem. Nationally, about two-thirds of sulfur emissions come from coalburning electric power plants, and available technology can reduce these emissions through vigorous energy conservation together with the use of stack scrubbers and low sulfur coal. EDF has therefore joined with seven state governments and three other environmental organizations to sue EPA for failure to set or enforce sulfur emission standards adequate to stop acid rain damage under the Clean Air Act.

EDF has also helped in drafting or enacting state laws controlling sulfur and nitrogen pollution in New York, New Hampshire, Massachusetts, Minnesota, and Wisconsin. State laws serve as a model, and put greater pressure on Congress to pass effective national controls. To deal in the long run with acid rain and the related problem of global warming known a the greenhouse effect, it will be necessary to make a transition away from dependence on fossil fuels and toward alternative energy sources. Cooperative efforts with industry to expand the kind of energy initiatives that EDF pioneered in California will be urgently needed as the nation–and the world–begin to make this complex transition.

A Environmental Danger of Acid Rain in Europe and United States. (2021, Oct 31). Retrieved from http://envrexperts.com/free-essays/essay-about-environmental-danger-acid-rain-europe-and-united-states 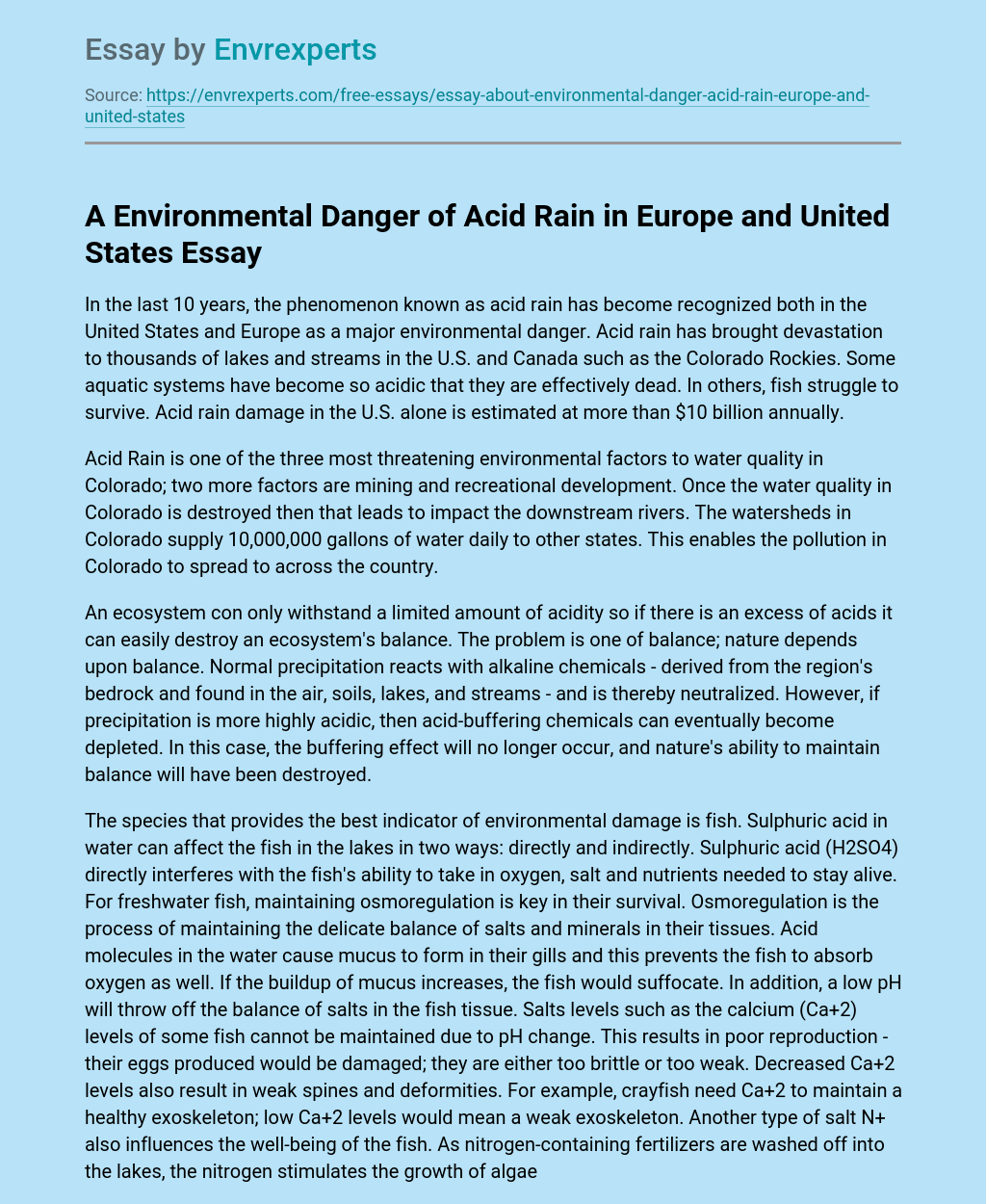