Don’t waste time
Get a verified writer to help you with Environmental Education and Awareness Among Secondary Level Students
Hire writer
$35.80 for a 2-page paper

The study conducted in 997 students. Awareness towards environment is more in the private school, English medium and urban student as compared to the Government school, Assamese medium and rural student respectively. Whereas female of rural area, private school and English medium school were less aware than their counterpart. When uniformity of awareness in both sex were studied, female is found to be more uniform in rural area, Government, Assamese and English medium school. Male are more uniform in urban area.

Both sex have shown same uniformity in private school. To protect and conserve the environment in near future, we all should concentrated in incorporation of environmental concepts into existing curriculum, development of new strategies, and preparation of instructional material.

Environment means the all conditions and influences that affect the all living organisms. In recent years human activities causes destruction of environment leading to climate change. In recent days, most of the people are conscious about the environmental degradation.

However, a large section of our society has low awareness.

In recent day’s degradation of natural resources resulting in environmental pollution that leads to serious global problems. Polluted environment endangers the human race and survival. But most of the pollutants are human origin such as industrial, domestic and agricultural waste etc. So to save our green planet we should make aware all the people of our community. It helps in prevention of diseases, malnutrition, poverty, hunger and destruction of wildlife, forest, soil etc. Hence, proper management of environmental crisis is utmost important before it threatens the existence of human and animal planet. Protection of the environment is one of the major challenges. Environmental education in both formal and non-formal system of education helps in protect and conserve the environment that helps in people lead to quality life. In formal system of education, teachers help in educating their students about environment related issues, which is possible only when the teachers themselves have mastery over environmental awareness (Gupta, 1996). Destruction of the earth and living beings is resulting from the lack of awareness towards environment. Meinhold and Malkus 2005 in their study reported how knowledge of environmental awareness helps in maintaining the ecological balance. There is an urgent need of creating mass awareness among the people with low awareness to solve the problem associated with environment. Khan, 2013 in his study conclude that education is the only powerful instrument that enhances the concern of people towards their environment, their immediate surroundings as well as towards the entire world.

Ignorance of people may create life threatening problems of environmental crisis (Sharma NK 2014). In long way students play a great role in prevention of environmental pollution (Thote P, 2013). A properly planned syllabus along with the application of separate disciplines of environmental education as in both school and college may bring the desired change in whole community level in near future (Arunkumar J 2012). Ecology and environmental studies in education in India have not been satisfactory and do not match with the quantum of research in these areas of science. In several papers, researchers were discussed about the environmental awareness in primary, secondary schools, universities, engineering institutions and other non formal education programs. The author tries to formulate new ideas to implement environmental education programmes for a better future of the mankind. The main objective of this study is to know the level of the environmental awareness among the secondary level students in relation to area where they live, type of school where they read and medium of their instruction.

For the present study 40 (forty) different schools under Secondary Education system (Govt. and private) located in different areas (rural and urban) of Kamrup (both rural and urban) district of Assam were taken into account.

A questionnaire was used to collect the data from the respondent which was constructed by the investigator himself. The final draft of questionnaire contained a total of 36 questions which was in the form of objective (yes/no) type questions. One mark was given to each of the correctly answered question. Therefore 36 was the maximum score and 0 (zero) was the minimum score. Random sampling technique was used to collect the data through questionnaire by giving the same to the respondents (students) of the selected schools.

In the present study, each item has given ‘1’ point for correct answer and ‘0’ for wrong answer. Then collected data were used for the calculation of Mean (M), Standard deviation (SD), z-value.. Analyses have done separately for different categories based on gender, area they include, type of school and medium of education (Assamese or English).

Standard deviation scores of male and female students regarding their belonging area, type of school and medium of education\nIn the present study we observed that secondary level students have fairly good environmental awareness. More environmental awareness in English medium students had may be due to having more study materials including both national and international level publications in English medium. In comparison to female students, male students are more aware about the environmental issues which may be due to much attachment male students with the society. They also actively participate in different social works. On the otherhand, Kuldeep (2017) found that female teachers are significantly more aware about the Environment pollution than that of male. In some studies, no significant difference in environmental awareness was observed between male and female (Dixit and Agarwal, 2009; Shaila (2003); Kumar S and Patil MS, 2007). However Sharma R.C. 1999 found that girls students attitude towards environment was more favorable than their counterpart boy students. 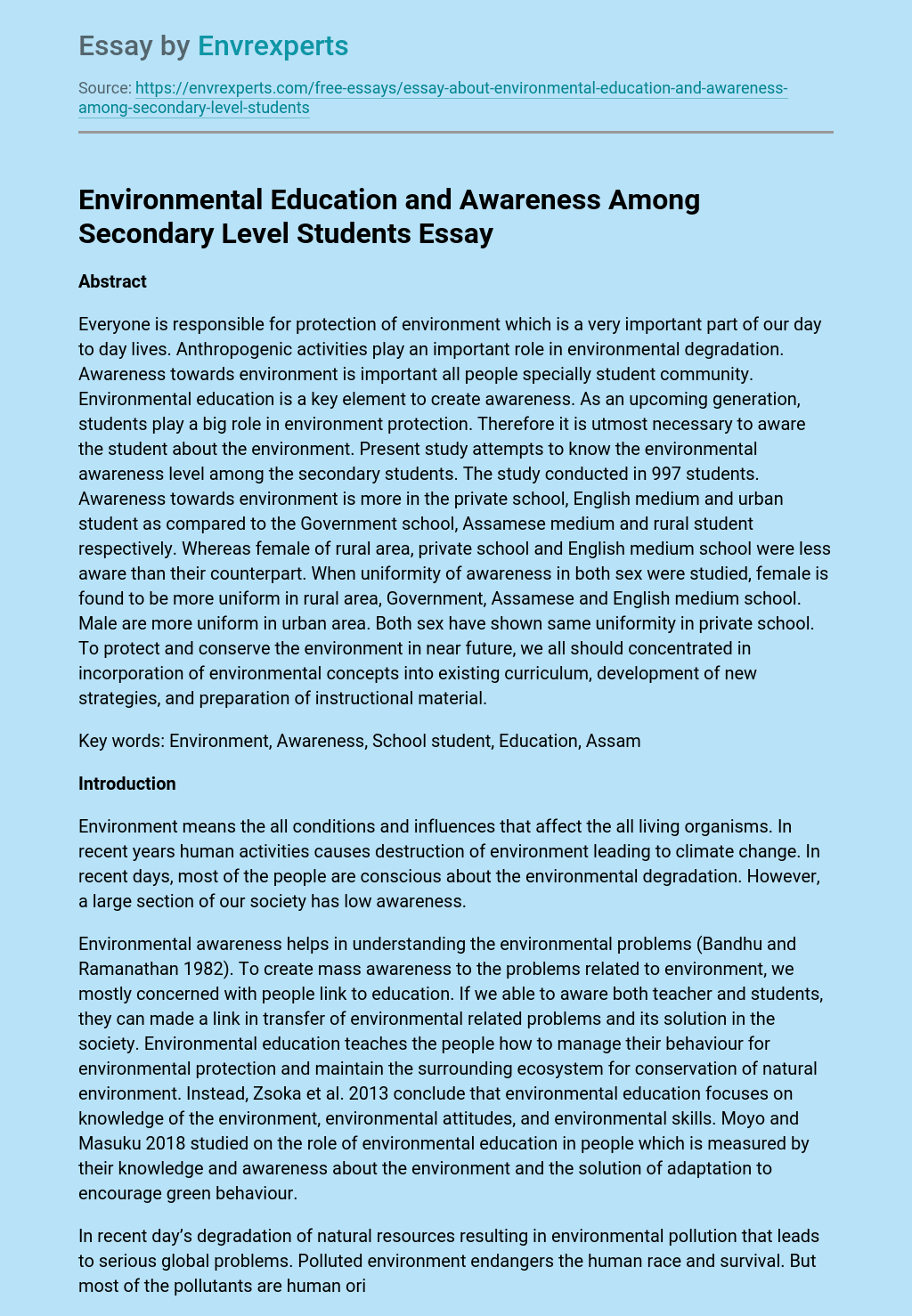