The Environmental Effects of Mining

There are many luxuries in our lives: cars, jewelry, phones, etc. It’s a long process to take raw materials and make them into such items. They start off as minerals and ores that have been mined throughout the world. At a quick glance, mining may appear to be harmless and very beneficial. However, there are hidden factors that people are not aware of that are causing harm to not only the economy, but to the environment. The price of the damage caused to the environment is not factored in when buying a product, which are known as externalities.

Don’t waste time
Get a verified writer to help you with The Environmental Effects of Mining
Hire writer
$35.80 for a 2-page paper

Mining industries are not being mindful of the environment because of the all the harm they cause to it, their lack of conserving resources, and their lack of external costs.

Mining requires a great amount of water and it’s heavily used in processing and purifying ores. Additionally, discharged liquid wastes and sewage pollute lakes, streams, and other bodies of water.

Last year in southern Arizona, mining companies and conservations debated over whether or not the area should be mined of its copper. Not only would this cause ecological damage, but it would also threaten the area’s water supply. The state of Arizona is an important source of copper, “supplying 63 percent of the nation’s domestic production in 2010,” and conservationists believe that “the operation would draw down the wells of local farmers and residents, change the region’s hydrology, increase air pollution and traffic, and possibly contaminate groundwater” (Gies, “A Clash Over Mining and Water”).

The subsidiary known as Rosemont Copper says that their method, dry-stack tailing, uses half the water that traditional mining techniques use and there will be zero net water loss. “The dry-stack technology is intended to conserve water — the company says it would recycle 85 percent of all water it used — and keep pollution from seeping into the ground. A filtering process would remove the chemicals used for treating the ore” (Gies, “A Clash Over Mining and Water”). However, the trace amounts of sulfur and heavy metals in the ores and rocks are nearly impossible to remove. These trace amounts will eventually add up and cause pollution to surface water and groundwater. Regardless of how much water the mining companies save, pollution would still occur if mining is allowed in Southern Arizona.

Just like copper, gold is also heavily mined and mining it has detrimental effects. “For thousands of years the desire to possess gold has driven people to extremes, fueling wars and conquests, girding empires and currencies, leveling mountains and forests” (Larmer, “The Real Price of Gold”). Recently in the Democratic Republic of the Congo, miners have been tortured by armed groups who are fighting for rights and control of the mines. In Indonesia, small miners were evicted by force and their villages were burned down to make way for a large-scale mine. These externalities are not taken into consideration when purchasing products made from mined ores. Moreover, the benefits do not out weight the cost of mining gold because it provides nearly no benefit except a materialistic one.

One of the biggest environmental effects of mining gold is toxic mine drainage. This occurs when rocks, which have been buried for a long time, are taken out of the ground and they release air and moisture. This can set off a chemical reaction to create acids and toxic metals, such as arsenic and sulfuric acid. These substances can get into lakes, streams, and rivers and harm aquatic life. Although this can occur with any mineral, it is very dangerous with gold because “…gold is often found in rock that contains a lot of acid-generating sulfides” (Rastogi, “Production of Gold has Many Negative Environmental Effects”).

In addition, “…mining gold produces much more unwanted rock than does mining other minerals” and “The mining watchdog group Earthworks estimates that a standard 18-karat wedding band leaves behind 20 tons of ore and waste rock” (Rastogi, “Production of Gold has Many Negative Environmental Effects”). The No Dirty Gold campaign made by Earthworks has been made as a possible solution to treat the harmful effects of gold mining. Retailers who follow the No Dirty Gold pledge promise to follow basic environmental and social responsibility for selling gold, such as certifying information on where the gold came from. However, there needs to be more done than this. One proposed idea is to stop the production of gold and keep all the currently refined gold in circulation. “Whenever you want to buy a piece of gold jewelry, take one you already have and sell it, or melt one down for refabrication.” (Rastogi, “Production of Gold has Many Negative Environmental Effects”).

In Brazil, issues about mining and its environmental effects have also been brought up, with large-scale mining companies trying to increase their efforts to extract minerals from the Amazon Rainforest. Although tapping into Brazil’s resources will increase economic growth, environmentalists are concerned. They believe that “…the development surge may speed deforestation” (Lyons & Kiernan, “Mining Giants Head to Amazon Rain Forest”). However, the deforestation wouldn’t be directly caused by mining. Mining industries would create roads to serve the mines and this would make it easier for illegal loggers to get to distant areas in the forest. Although this project is already in effect, it’s receiving strict supervision and studies are being conducting on the environmental impact of mining in the Amazon Rainforest, which is one step in the right direction.

However, the mining industry has done a lot of beneficial things. Without them, people’s lives would be more difficult due to the lack of luxuries. Nevertheless, pollution, loss of biodiversity, acid rain, and other factors are inevitably going to harm earth unless solutions are created for excessive mining. Children could have been harmed just for a wedding ring. Although some groups have taken an initiative to mine better, more needs to be done. People need to start asking themselves, “Do I really need this?”

The Environmental Effects of Mining. (2021, Oct 31). Retrieved from http://envrexperts.com/free-essays/essay-about-environmental-effects-mining 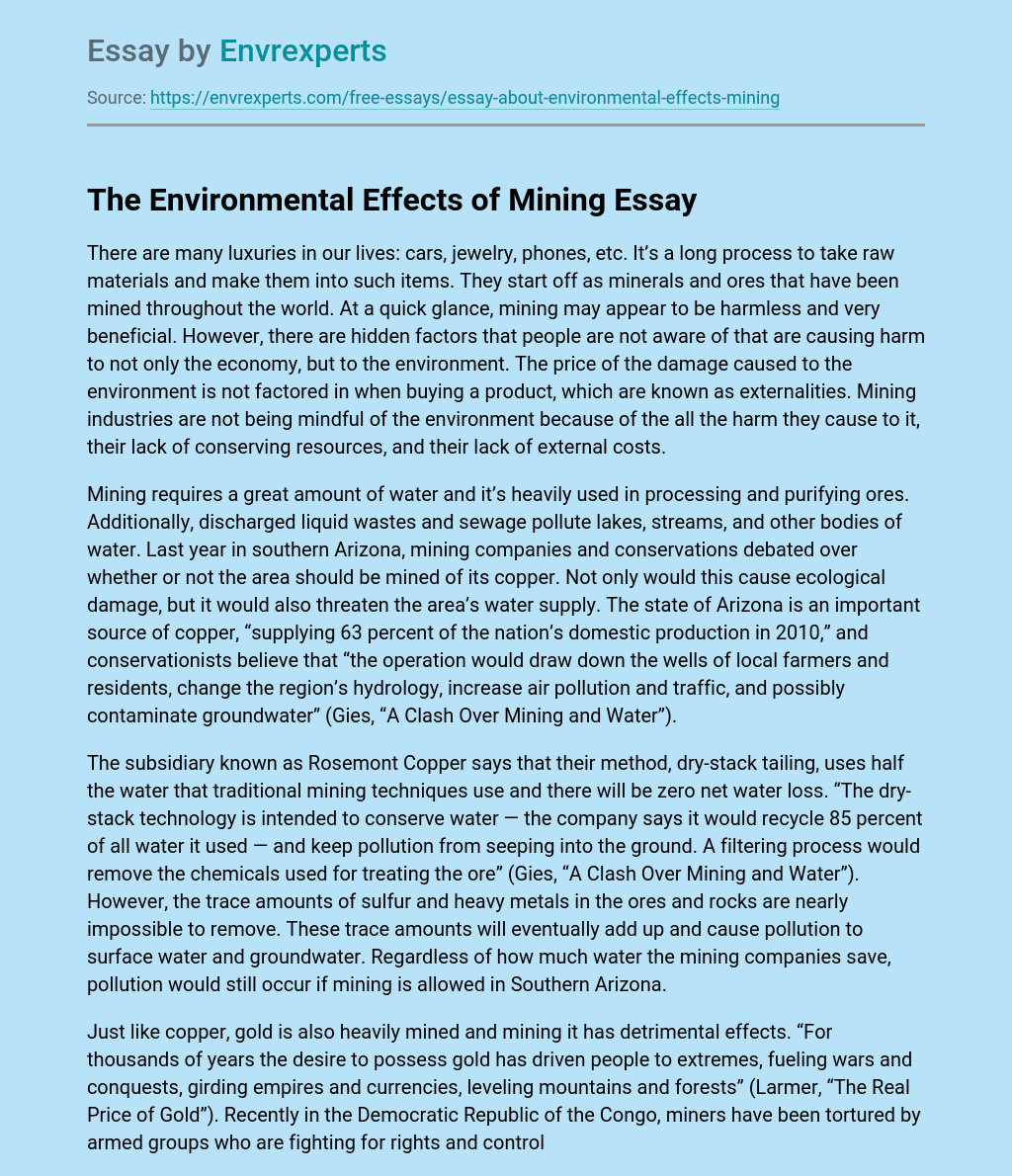