Small game hunting is past down from generation to generation. Now wouldn’t it be nice to small game hunt year round. The memories that would be made year after year.

Don’t waste time
Get a verified writer to help you with Environmental Issue of Hunting
Hire writer
$35.80 for a 2-page paper

With hunting year round there would still have to be regulations that would keep things in check. But it would still make hunting exciting.

For some hunters year round it’s almost a possibility. A longer hunting season split into four seasons money from the license we purchase year after year. Are a big part of the reason wildlife environments are even still intact. Another thing is that how important it is for some animals that shouldn\'t be hunted and hunting destroys animals families and habitats. here is what I found online about this stuff is that Despite increasing public opposition, hunting is permitted on 60 percent of U.S. public lands, including in over 50% of wildlife refuges, many national forests and state parks; on federal land alone (more than half a billion acres), more than 200 million animals are killed every year (McCarthy).

And also wild animals are not crops here hunters treat them like crops of which percentage can be harvest to them. Wild animals are no different than some wheat they are literally treated like a crop. Also did you know that 40% of hunters slaughter millions of animals its like people don’t know how to hunt.  Also now the state of wisconsin is thinking about making gun season 19 days instead of 9 like thats just gonna decrease the population of deer.

Also the animals go through pain and suffering is not right at all by getting wounded a lot by other hunters. 20% of foxes who have been wounded by hunters have been shot again. Honestly it’s seriously cruel and not right. It’s also unnecessary and also nature takes care of its own africa and canada hunting has caused bighorn sheep to fall by 25%.

Plus killing animals is not even a sport it’s a sick hobby to many people are hurt during this sport. To be honest if there are ways to prevent animals from getting killed don’t you think we should learn them. Most hunters now days are doing it for a sport they have dead animals displays on there wall. The sport that people call “hunting” is really dangerous getting rid of this sport will benefit ourselves now days. Traps are also the main tool that people use there are many types of traps. That hunters use but a common trap is the leg hold trap the trap holds the animal by their leg until the hunter arrives to kill it that’s one way not how to hunt. 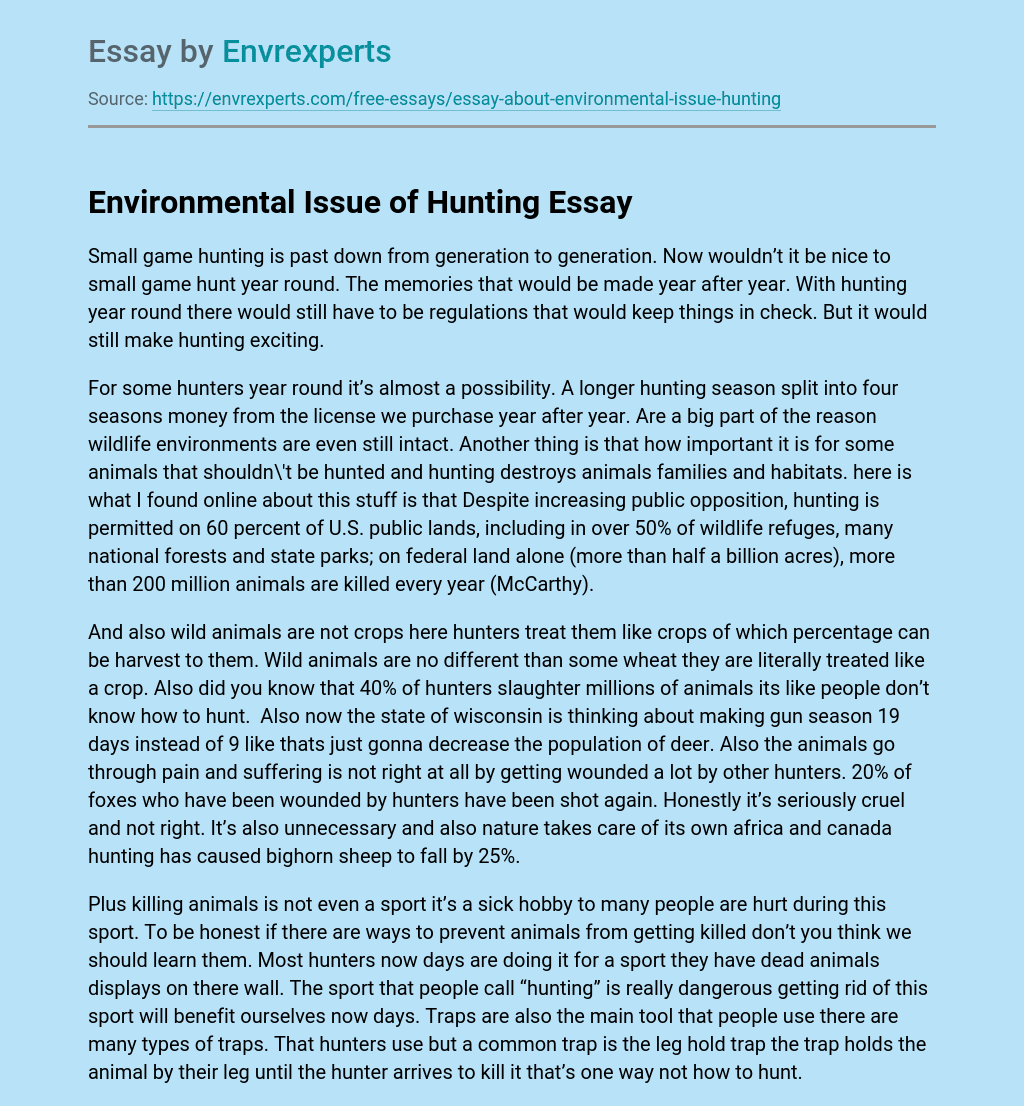