Since its inception, the Energy became one of the main focuses in the integration of the European Community. This was marked by the creation of the European Coal and Steel Community ECSC Treaty in 1951 and the EURATOM Treaty in 1957 which regulated the most important energy source at that time. The current EU energy market has become increasingly integrated with increasing cross-border trading and more physical interconnection in the European grid triggered by its internal energy market policy. This shows that the relationship and cooperation between European countries is a basic principle in energy issues.

Don’t waste time
Get a verified writer to help you with Environmental Issues: Energy Problem
Hire writer
$35.80 for a 2-page paper

Over a century, hydrocarbon has become a major source to meet energy needs and make it as the biggest contributor to CO2 emissions. This has raised awareness of environmental issues and makes renewable energy sources and policies as a new focus area to be more pro-environment.

This is based on the fact that the RES play a significant role in controlling climate change and ensure energy security by creating a more competitive energy system, secure, and sustainable. Directive 2009/28 / EC was introduced as one of the concrete steps the EU to support the reduction of GHG emissions in the energy sector by establishing a common framework for promoting energy from renewable sources. This directive sets national mandatory targets for using renewable energy sources in the total gross energy consumption and in the transportation sector.

Furthermore, as mentioned in Article 1, this directive also provided the rules relating to administrative procedures, statistical transfer of statistical, common interest projects between Member States as well as with third countries, guarantees the origin certificate for RES, the grant access for RES to the network, and establish sustainable criteria for the use and support of biofuels and bioliquid as Renewable Sources.

Competence obtained by the EU in external energy policies with the entry into force of the Lisbon Treaty on 1 December 2009 is explicitly and effectively. Article 194 TFEU is the legal basis for achieving this ambitious goal. There are four focuses to be achieved through this article; to ensure the functioning of the energy market, ensuring to keep the energy supply in the EU secure, innovate and find new forms of RES, to achieve the efficiency of the energy use, and to expand the energy networks especially in interconnection. In order to achieve this goal, the European Parliament and Council, acting with ordinary legislative procedures, will set measures that must be adopted after consultation with the social and economic committee, and the regional committee. The steps to be introduced will not affect the energy rights of member states that can determine the conditions for exploitation, the choice between various sources within the country, and even determine the general structure of their energy supply without reducing article 192 (2) ( c).

Measures to achieve these objectives in article 191 TFEU contained in Article 192 TFEU. But what\'s interesting is the association in the Energy Title. Article 192 (2) of the TFEU states that parliament and the council will decide on actions to be taken by the EU which then unanimously, in accordance with special legislative procedures, are obliged to adopt actions that significantly influence the choice of Member States among various energy sources and the general structure of the energy supply. This seems inconsistent when related to article 194 on energy. The inconsistencies in these Articles are interesting to discuss by looking at the linkages between them. For this reason, this paper tries to analyze the relationship and conflict (if any) between Article 194 TFEU and Article 192 TFE and Directive 2009/28 / EC related to Promoting the Use of Energy from Renewable Sources and analyze its effects on the current legal framework or future legal framework.

2. Relationship Between Article 194 TFEU, Article 192 TFEU, and Directive 2009/28/EC on Promoting of the Use of Energy from Renewable Sources.

2.1 Shared Competence Between the EU and Member

States in the Field of Energy It is undeniable that the Eropean domestic energy resources are limited, so there is a need to rely on energy sources from third countries. The need to import energy was previously managed by Member States. However, the EU\'s role in regulating its external energy policy is increasingly based on the interests of developing the liberalization of the EU's internal energy market, and EU\'s concern about environmental threats related to energy consumption. Referring to article 194 of the TFEU, by emphasizing "in a spirit of solidarity between member states", the EU together with Member States has the competence to act to achieve common goals set in the context of developing and functioning of the Internal Energy Market with regard for the need to preserve and improve the environment. This shared competence refers to what is stated in article 4 (2) (i) TFEU. However, to interpret this shared competence, more details must be seen in Article 2 (2) TFEU. Based on this article, the EU and Member States can take legally binding actions in the energy sector. But Member States "shall exercise their competence to the extent that the Union has not exercised its competence" or "if it has been decided to prevent exercising its competence". That means, Member States are not allowed to carry out its competence if the EU has adopted legal acts in that field and eliminates the possibilities of a contradictory legislative. Noting that the general structure and choice of energy resources varies by country, Member States can still maintain their energy mix and conditions for exploiting their energy sources as mentioned in article 142 (2).

However, this becomes a dilemma for Member States when referring to Directive 2009/28 / EC which targets at least 20% of the total gross energy consumption of the EU in 2020 must come from the RES. This target will clearly affect Member States' energy rights, at least to some extent. Furthermore, if it refers to the emphasis on "in a spirit of solidarity between member states" in Article 194 (1), it indicates that although the EU and Member States operates and develops energy policies together, they must continue to work together and coordinate among themselves and do not create policies that are contrary to the common goal. In addition, the Commission has also given a statement that, despite recognizing Member States' rights in choosing energy policies that are most appropriate to their national energy mix and preferences, this does not mean that Member States can adopt measures incompatibles with the common goals including market integration, competition and other climate goals.

2.2 The Effect On the Member States’ Energy Right.

As stated in its Energy Roadmap 2050, the EU relies heavily on reducing the use of hydrocarbons as its energy source and reducing GHG emissions to achieve specified environmental and climate objectives. However, because the EU cannot prohibit Member States in the use of certain energy sources, as stated in article 194 (2), Directive 2009/28 / EC becomes a mainstay tool in increasing sustainable development and achieving climate goals. Based on hierarchy norms in the EU, Treaties has power over Directives, but Directives can also be seen as formal expressions of EU interests and certain standards accepted and defined by many open-strands in the Treaties.

So with this Directive, it becomes a tool for the EU to indirectly influence energy policy and Member States\' rights in order to achieve the objectives set by the EU, especially related to climate objectives. Furthermore, the EU has also recast this directive by imposing a new directive 2018/2001 on promoting the use of energy from renewable sources. Although the new directive states that the legal basis is 194 (1) and imparticular regard to article 194 (2), this will still be debated to the what extent that this Directive affects the energy rights of Member States.

Decisions related to article 194 (2) TFEU and 192 (2) TFEU can be seen in the General Court’s judgment in Poland v Commission case. In this case, Poland debated the decision on the trade in greenhouse gas emission allowances by stating that article 10 (a) of the ETS Directive 2003/87 was considered a violation in the second paragraph of article 194 (2) of the TFEU. Poland argued that the commission did not consider the energy mix conditions in each Member State. In this case, the Court ruled that "Therefore, the rights mentioned in the second subparagraph of article 194 (2) of the TFEU do not apply and this case, because the decision contested is an action taken by the European Union in an environmental policy framework".

The General Court states that on 194 (2) TFEU does not apply when the provisions are adopted in the environmental field and therefore the decision of the commission and directives does not violate the competencies provided by TFEU. This is because article 194 (2) TFEU refers to article 192 (2) TFEU so that it must clarify the objectives in Article 191 (1) TFEU; the legal basis for actions adopted by the council in order to achieve the objectives of the policy environment. Therefore, acts are adopted in the context that can affect the Member States’ right in second paragraph of Article 194 (2) TFEU.

The EU has ambitious targets when it comes to climate goals. This can be seen from how the EU wants to influence not only regionally, but also the entire world. The EU creates legislation that has external and internal competence in the energy sector through Energy Title. Since Energy has a big influence on the environmental impact, for that reason, if related to environmental problems, the EU has greater competence to influence Member States’ energy right. EU ambitious targets set out in Directive 2009/28 / EC which has a target of using energy from renewable sources of at least 20% of the total gross energy consumption and 10% on the transportation sector. This target has become even more ambitious with the amendment to Directive 2018/2001 which is a part of the Clean Energy Package. Binding target of 32% by 2030 will clearly affect the general structure and energy mix Member States.

This is also supported by the existing and most prominent secondary legislative body in Directive 2009/28 / EC, where a certain level of attribution of power to the Union has been agreed. Limitation of Competence to \"may affect \" and \"cannot affect\" becomes unclear if it only refers to the Treaties, and will continue to cause debate. This will remain a gray area for other issues. For this reason, there is a need for a secondary legislative that will provide a clear interpretation of the extent of competence of the EU and Member States on an issue. 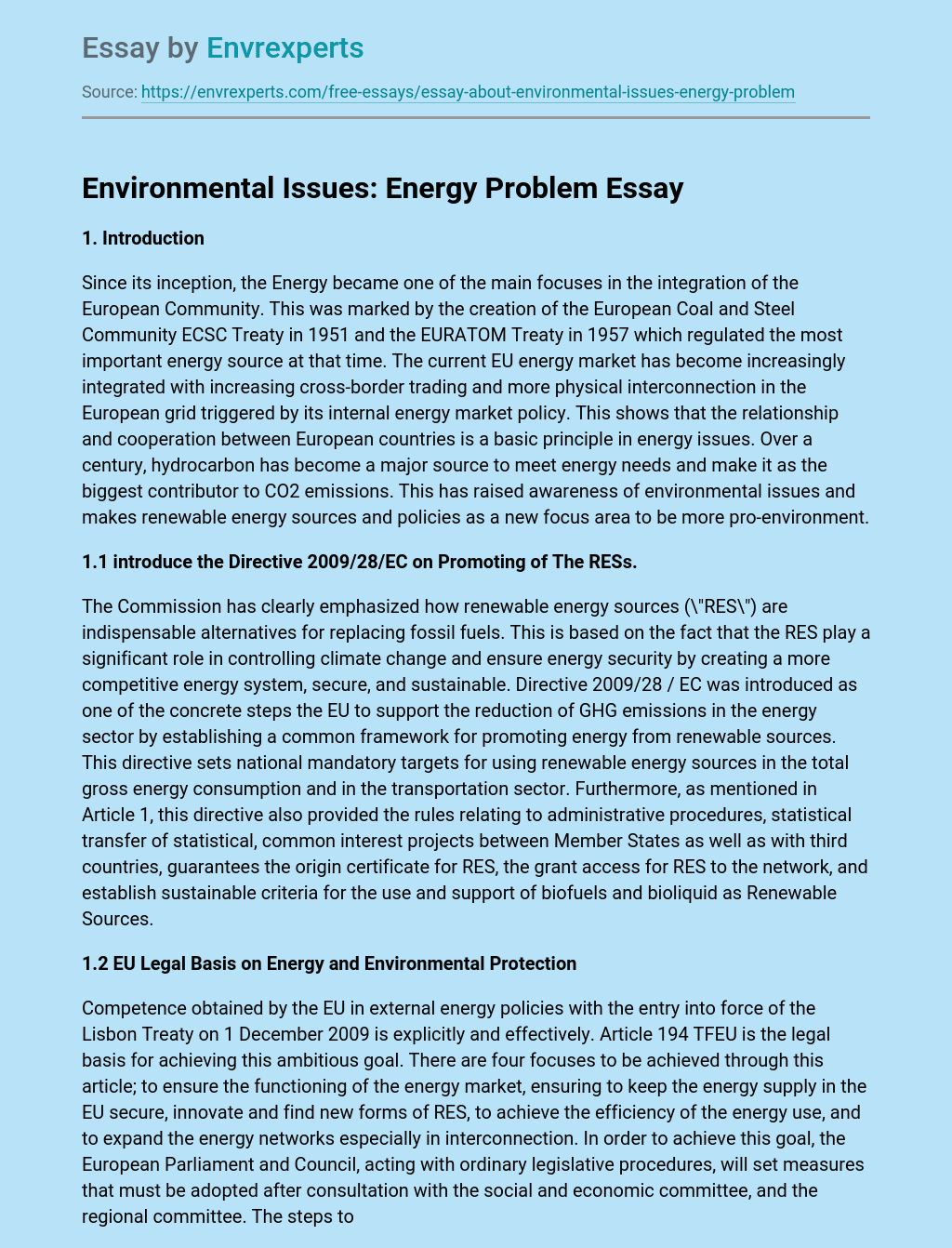