Environmental Issues in the Philippines

The loss of biodiversity is a great issue that is needed to be addressed in the Philippines.

The Philippines, the country that is made of ​seven thousand and six hundred forty one islands. It is located in Southeast Asia, surrounded by the huge bodies of water and neighbouring countries. The Philippines is also a part of the group that resides in the ​‘Ring of Fire’ ​which according to ​National Geographic, ​that the Ring of Fire is “​a path along the Pacific Ocean characterized by active volcanoes and frequent earthquakes.

Don’t waste time
Get a verified writer to help you with Environmental Issues in the Philippines
Hire writer
$35.80 for a 2-page paper

” ​Despite being located in the Ring of Fire, the Philippines is one of the fastest third-world countries that is growing at a fast rate.

In regards to the issues in the Philippines itself, people always try to connect that because the country is poor itself, they do not look further into the idea that there are also other issues that can be addressed and not just the monetary issues as well. Addressing the idea of the Philippines losing its biodiversity, it is true in our times now. Back then, this issue was only a small issue because the Philippines was rich in biodiversity. The Philippine seas was the home of: “22,000 species of shellfish, 1,600 seaweeds, and 824 specifies of marine macrobenthic algae… Our seas are home to more than 2,500 fish species… six species of big whales… The children’s favorite dolphins has 13 species…” (De Guzman, 2010)

According to ​Philstar Global, ​the Philippines is an ​“archipelago known as having the crown jewels of marine biodiversity in the entire planet.

” (De Guzman, 2010)​ Knowing from personal experiences because I lived in the Philippines half of my life before coming to the United States, is that it is true that in the early 2000’s, the abundance of the species are in great shape before in some areas that are solely focused on them such as the beaches, islands for vacationing, and others. Now, we are seeing a decrease in biodiversity. It is hard to see a country that is very gifted in marine biodiversity but is decreasing due to human actions, we only have ourselves to blame.

Another added action of human beings at the cost of the loss of biodiversity in the Philippines is deforestation. Deforestation happens everywhere in the world, some instances of deforestations are more terrible than others. In an Article by ​Ree.ph, ​that deforestation is the leading cause of habitat destruction and its effects are on an exponential scale. Deforestation is something serious that is needed to be addressed, the illegal cutting down of trees, and other stuff. The image below from Ree.ph shows the decades of the forests decreasing.

Another reason for the loss of forest is from the population growth. According to Convention on Biological Diversity, ​forest ecosystems are threatened by growth of population in order to meet their needs, and commercial exploitation for the developing country and the buildings that it needs.

A quick connection to the article at ​Philstar, ​at a similar time as well ​(Ree.ph) “marine habitats such as coral reefs are being destroyed by way of irresponsible and unsustainable fishing and aquaculture practices such as dynamite and poison-dependent fishing is harming marine habitats ecosystems all over the country. As a result, only 5% of the Philippine coral reef system is regarded in excellent condition, and over 32% are already severely damaged. The World Resources Institute reports that 60% of coral reefs on a global scale are threatened. However, a staggering 85% of the reefs within the Coral Triangle alone are threatened.”

The loss of biodiversity is a broad issue that many different factors are contributing to this. Another issue that is a factor is the misuse of natural resources and wildlife. In the Philippines, the seas is the major source for food, as it is an archipelago and that there are many different fishes that are present. But the tendencies of the human race to exploit what the Earth has blessed us with can go too far and now we are the ones to blame for the damage. Overfishing, illegal use of fishing equipment such as nets (specifically Trawl nets that can lead to overfishing), dynamites, and chemicals. This is the sad reality that is going on not only just in the Philippines but also the rest of the world as well, now we are facing the reality that we are about to lose our fish as there are approximately 10% left in our ocean waters. An article by UnderCurrentNews ​greatly summarizes what can happen if these illegal actions are still not being prevented:​ “​The world’s leading body of biodiversity scientists this year warned that exploitable fish reserves in Asia-Pacific waters were on course to crash to zero by 2048.” (UnderCurrentNews, 2018)

The loss of biodiversity is happening because of the introduction of the alien species to their own habitat. These can lead to the endangerment or the extinction of the natives because of the food competition, and dominance in the area. In an Article by R.C. Joshi, this person has listed all the different types of the alien species that was found during the time of the creation of the research, from aquatic plants such as the ​Water hyacinth​, aquatic animals such as the ​Golden apple snail, ​vertebrates such as the rodents and other lizards, and others. The author explains greatly of where they have possibly originated and that we consider them pests. The graph from Ree.ph shows the extinction rates of the animals.

Lastly, with the growing population, waste and pollution is bigger than ever and this is a great factor of loss of biodiversity. Waste everywhere can be seen, especially in the waters. Which is the main source in the Philippines. Non-biodegradable plastics are always seen in the waters, factory wastes are being dumped in the waters, and flooding can happen because of the garbage that is blocking sewage systems. Residues can be found on the stomachs of the fishes in the waters because they think that the waste is food that affects marine life as well, leading to deaths of the fish, the predatory animals, and others.

The loss of biodiversity is a great issue that is needed to be addressed in the Philippines. The government is trying their best in order to prevent more damage to their country, but since that issue like these already happened and it can be fixed but it will take a long time. But moving along to the future, the government should implement new plans in order to protect the country, improve marine life, and to return everything in abundance so that there will be no fear of depletion for the future generations.

Environmental Issues in the Philippines. (2021, Oct 31). Retrieved from http://envrexperts.com/free-essays/essay-about-environmental-issues-philippines 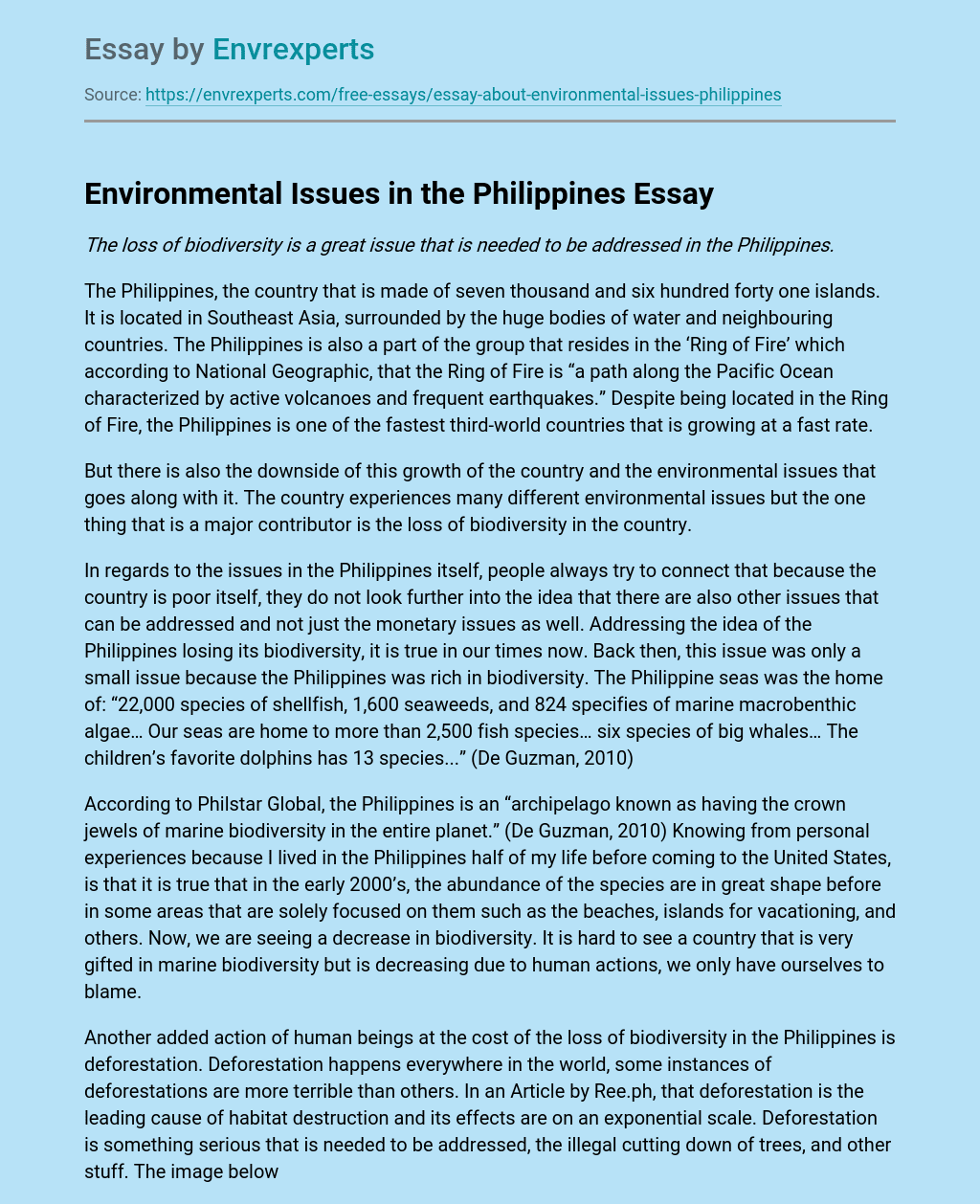