Environmental Issues In Stories of Easter Island and The Lorax

Deforestation is a main environmental issue shown in the stories of Easter Island and The Lorax. According to Stuart L. Pimm, Deforestation is the clearing of thinning of forests by humans.

Don’t waste time
Get a verified writer to help you with Environmental Issues In Stories of Easter Island and The Lorax
Hire writer
$35.80 for a 2-page paper

In the stories of Easter Island, native people destroyed all the trees to carry down the big statues. Polynesians were running out of foods because the surface was left exposed to the rain and strong trade winds by no trees. They couldn’t grow foods on the ground to eat. In The Lorax, Once-ler cut down all the trees to produce thneed from Trufula trees. Brown Bar-ba-loots have to leave the beautiful place because there were no Trufula fruits which were their main diet.

Humans are the one who caused deforestation in both stories. Eventually, the deforestation caused lack of nutrition which made two environments collapsed.

Competition is another issue that made two environments crashed. Moai statue is a gigantic carved stones figures found on Easter Island. About 317 big statues are left on Easter Island. Moai statues were built to honor chieftain or other important people who had passed. There were various tribes on the island, they competed to build more statues. Since the statue is made of stone in the mountain, it must be moved from the top, and wood was the material that was suitable for carrying many of the heavy statues.

In order to build more statues, they would cut down more trees to compete. Once-ler competed with Lorax to gain more thneed from the Trufula trees. When Once-ler cut down the trees, the Lorax tried to protect them. Trees made food available to Brown Bar-ba-loots, and trees were a place to live. Villain cut down all the trees, and all the living things had to leave by the deforestation. Competition, which began in a small obstinacy, has destroyed the environment.

Environmental damage was driven by humans’ greed. Polynesians cut down more trees to build more Moai statues. Native has felt proud to build a large and magnificent statue. However, making a large and heavy statue would have required a lot of trees to bear its weight. People were blind by the competition, so they might not even know the last tree was being cut down. As similar to The Lorax, Once-ler may not have known that his greed had cut down the last Trufula tree. He needed a lot of thneeds to raise his money. His factory became a four-story building and he just destroyed the forest with a super axe hacker. His greediness has become a difficult situation to recover, although he realized that he had made many things disappear. The Blindness behind the greediness has made environment impossible to recover.

Deforestation destroyed natural resources and habitats for the living things. Humans’ competition ruined the environment. And greed has caused all these problems. It all started with human actions and created a state of destruction for the environment. In both stories of Easter Island and The Lorax, similarities show how people’s actions hurt the environment.

Environmental Issues In Stories of Easter Island and The Lorax. (2021, Oct 31). Retrieved from http://envrexperts.com/free-essays/essay-about-environmental-issues-stories-easter-island-and-lorax 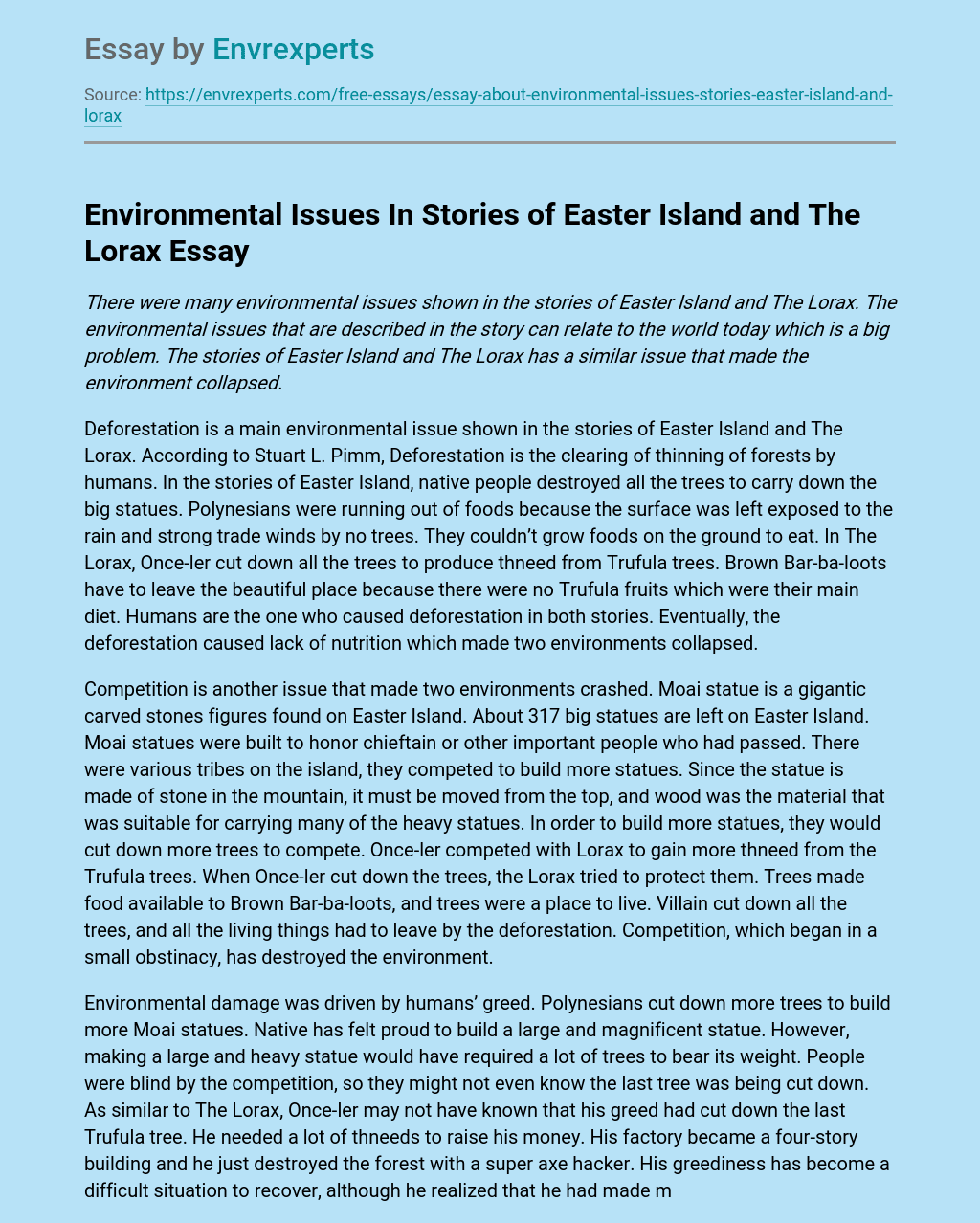