Environmental legislation is one of the most important issues of our time, and it only will continue to grow in severity as time goes on.

Since the mid-20th century, the debate regarding the environment has risen to prominence on a global stage. In America, and across the world, legislation has been passed that addresses several environmental topics, including, but not limited to, alternative energy programs, air quality regulation, wildlife protections, emission standards, and nuclear waste requirements.

Don’t waste time
Get a verified writer to help you with Environmental Legislation: Environmental Issue of Today
Hire writer
$35.80 for a 2-page paper

Lawmakers are faced with the challenge of preserving our environment while avoiding any unintended negative consequences, such as an economic downturn. Scientists across the world warn of the potentially devastating effects of climate change and other issues if left unchecked. A 2007 report by the Intergovernmental Panel on Climate Change (IPCC) points out a possible effect of unmonitored global warming. They warn that “as the Earth continued to warm, severe droughts and flooding would become more common, glaciers and polar ice would melt at abnormal rates, and ocean temperatures and sea levels would rise.

” (“Climate Change: Should the U.S. Government Take Aggressive Steps to Address Climate Change?”). If the scientific community is correct, the way the environmental crisis is handled will prove momentous in the future of our planet. Although the exact solution to these environmental problems remains unclear, it is certain that humanity must act swiftly to address this problem.

When talking about environmental legislation, it is important to differentiate between measurable data and our natural human emotions.

Debates regarding environmental law often become highly emotional. People on both sides sometimes feel very strongly about their opinions. For example, an individual who enjoys hunting may take it very personally when legislation is proposed which would prohibit them from hunting in their favorite location. Even though there may be data showing that certain sections of the woods need time to repopulate, the individual’s emotional attachment to hunting in that area may overpower any rational reasoning. Throughout the world, there is a constant balancing act occurring between emotional and logical reasoning when discussing controversial issues such as environmental legislation. Although emotion may distract from the facts at times, it often plays a key role in supplementing logical reasoning. This blend of feelings and facts can lead to intense, sometimes very personal debates in legislative bodies such as the United States Congress.

The main source of controversy regarding environmental legislation comes from a disagreement over how active a role the U.S. government should take in the fight against climate change. According to a 2017 poll, about 70% of Americans believe that global warming is caused by human activities, (“Climate Change: Should the U.S. Government Take Aggressive Steps to Address Climate Change?”) showing that most of the American public agree on the cause of the problem, even if there isn’t a consensus on how it should be addressed. Proponents of government action argue that more aggressive steps must be taken to reverse or prevent climate change, pollution, and other prominent environmental issues. Proponents advocate the creation of mandatory emissions caps, the funding of renewable energy programs, protection of endangered species, and other similar legislation. They believe that businesses have been giving an opportunity to reduce their environmental impact, and have, for the most part, failed to do so. Proponents feel that legislation must be passed to force businesses to act in an environmentally friendly way, or face the consequences. There is a fear that without new rules, pollution from industrial buildings, such as power plants, may pose a serious health risk to the public. “

The Clean Air Task Force, an environmental group, estimated in 2001 that normal operations at 51 of the plants accused of violating new source review would decrease the life spans of between 5,500 and 9,000 people each year, and lead to more asthma attacks.” (“Clean Air Act's Source Review Clause.”). For this reason, opponents argue that tightened restrictions would lead to improved public health to some degree. There are some who feel that the United States has a moral obligation to become a global leader in the fight against climate change. They believe that if the United States passes environmentally-friendly legislation, other countries may follow suit. There are some Americans who feel very differently about the role of the United States government. The main concern is rooted in the fear that environmental legislation will hurt the United States economy. The biggest rivals of the environmental movement are the corporations who would be most affected by government restrictions.

Since the 1960’s, a great deal of legislation has been passed regarding the environment. Some have a had a significant impact, while others are rather forgettable.

Leaders in America and around the world have passed laws and created treaties addressing several issues. The Clean Air Act “gave the government the authority to regulate a number of harmful pollutants for the purpose of safeguarding public health and the environment.” (“Clean Air Act's Source Review Clause.”)  The regulations included in the act were able to successfully reduce pollution levels across the country, but the act was unsurprisingly unpopular with certain businesses and free market advocates.

Another key piece of legislation which regulated sought to improve public health was the Clean Water Act. This law sought to address the poor water quality standards that plagued America at the time. Recently, the act has been expanded to address oil spills. For the most part, this act has been successful, as “the legislation has stopped countless millions of pounds of pollution from entering our waterways.” (“Top 5 Pieces of Environmental Legislation.”)

One of the more underappreciated environmental laws passed by Congress was the Endangered Species Act, which protects animals listed as “endangered” or “threatened” by using several protections.  Peter Galvin, the conservation director at the Center for Biological Diversity praises the act for being “…one of the few laws that expressly values non-human life,' and pointed our that 'no species has gone extinct after being listed.' (“Top 5 Pieces of Environmental Legislation.”)

Arguably the most impactful piece of environmental legislation passed in recent history was the Montreal Protocol. Kofi Ana, the former Secretary-General of the United Nations, says that law is 'perhaps the single most successful international agreement to date,' (“Top 5 Pieces of Environmental Legislation.”) The 196 nations that signed it agreed to “protect the stratospheric ozone layer by phasing out the production and consumption of ozone-depleting substances”. (“The Montreal Protocol on Substances That Deplete the Ozone Layer.”) The act has been widely regarded as a success.

According to the U.S. State Department website, “Full implementation of the Montreal Protocol is expected to result in avoidance of more than 280 million cases of skin cancer, approximately 1.6 million skin cancer deaths, and more than 45 million cases of cataracts in the United States alone by the end of the century, with even greater benefits worldwide. The Montreal Protocol’s Scientific Assessment Panel estimates that with implementation of the Montreal Protocol we can expect near complete recovery of the ozone layer by the middle of the 21st century.” (“The Montreal Protocol on Substances That Deplete the Ozone Layer.”) Although these are just a few laws, it’s clear that around the world, environmentalists are working to pass legislation that ensures that future generations will be able to live healthy, sustainable, happy lives.

It remains unclear what will be done in the future regarding environmental legislation. If the scientific community is correct, action must be taken if humanity hopes to stop the growth of problems such as climate change, poor air and water quality, endangered species, ozone depletion and much more. As Dr. Rebecca Gillaspy, a health science professor at the University of Phoenix says, we must “regulate the interaction between man and the natural world to reduce threats to the environment and increase public health.” (“What Is Environmental Legislation? – Laws, Regulations & Timeline.”)  If the planet is going to be saved, the people of Earth must take action. 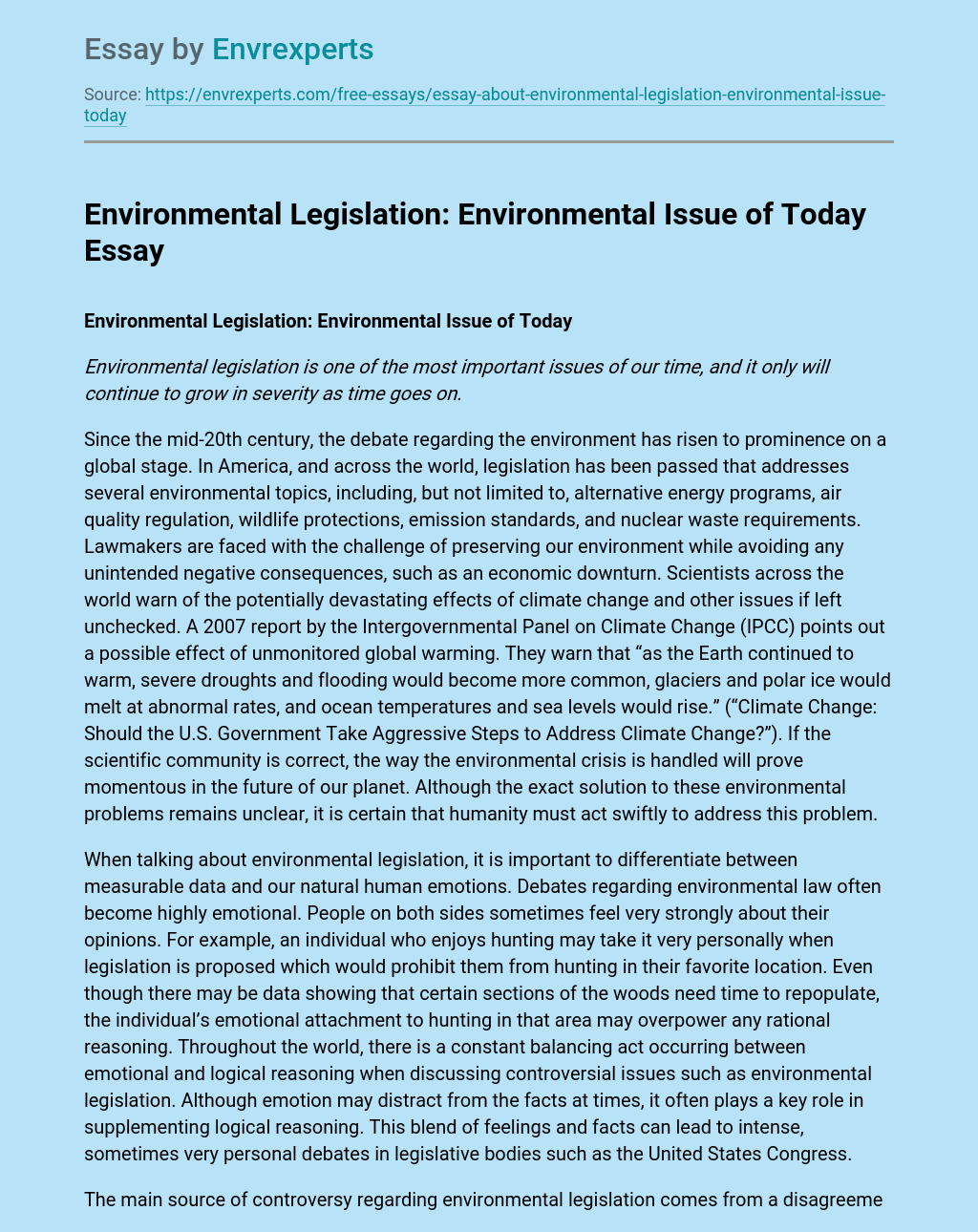