Environmental as one of factors of Parkinson`s Disease

Parkinson’s Disease (PD) is a neurodegenerative disorder characterized by the degeneration of dopaminergic neurons in the substantia nigra pars compacta. Due to the poor understanding of the pathophysiology of PD, Animal PD models were developed to aid with the investigation of the pathogenesis of PD. The toxin-induced model of PD is the most used model in most research work. There have been many PD animal model studies on motor features and economic importance associated with dopamine depletion however there are few findings on the molecular pathways of cell loss of these models.

Don’t waste time
Get a verified writer to help you with Environmental as one of factors of Parkinson`s Disease
Hire writer
$35.80 for a 2-page paper

In this review, we provided a summary of the pathways of the four most used toxin-induced models (6-OHDA, MPTP, Rotenone and, Paraquat) used to mimic PD in animal models to give a piece of basic knowledge on the type best to use for specific experiments with relevance to its shortcomings.

However, some patients suffering from PD have also exhibited insomnia, autonomic dysfunction, hyposmia, depression, and dementia (Petit et al., 2014). The cause of sporadic PD is unknown, with uncertainty about the role of environmental toxins and genetic factors (William and Serge, 2003).

Some neuro-toxic compounds could result in rodents producing symptoms that mimic human PD, hence, the use of toxin-induced models in PD experiments. These toxin-induced models may help researchers get to the bottom of the etiology of PD and develop curative therapies to manage it. Many models have been developed and are being used for Parkinson disease research but the common model being used is the toxic- induced model, however, the reasons for a choice of a model for particular research and the pathogenesis of the choice of a typical model is really not understood by most researchers, leading to incorrect administration route, delay experimental time, experiment failure and additional cost.

Therefore, there is a need for studying the developmental process and the shortcoming of each toxic-induce model used to induce Parkinson’s disease, to bring out the understanding of their pathways, shortcomings and educate researchers on the type to select for any given experiment. This review seeks to enlighten readers on the pathogenesis and the shortcoming of these toxics when used as models to induced Parkinson’s disease to aid perfect selection and development of these models for the right research work.

The major cause of Parkinson’s disease is unknown. However, many studies have deduced some common causes of Parkinson’s disease. The first and most known cause of Parkinson’s disease is environmental factors like water, pesticides, herbicides, farming activities and living activities of man (Tanner and Langston, 1990). It has been reported that workers exposed to toxins and heavy metals have the highest risk of PD (Caudle, 2015) and the exposure to agricultural chemicals like rotenone and paraquat have harmful effects on the dopaminergic neurons (De Lau and Breteler, 2006). Much cases of PD have been associated with a toxin applied in the environment. The most known toxin that has been reported to cause PD is MPTP (1,2,3,6-methyl-phenyl-tetrahydropyridine), This was strengthened by the fact that there was a high risk for developing PD for people who lived in environments with pesticides related in structure to MPTP (Firestone et al., 2005).

Also, Drug addicts who took MPTP developed a syndrome that strikingly resembled PD, both clinically and pathologically (Langston et al., 1983). Another interesting side of PD etiology is genetic factors. A number of genes have been screened and found to be linked with an increased risk of PD, the 16 loci, designated PARK1 to PARK16 and other 11 genes on different chromosomes have been found to be associated with a higher risk of PD (Corti et al., 2011). Mutation of some genes in the brain section can also cause PD by affecting some gene expressions and these can be hereditary or not. A study by Ikebe et al., (1995) sequenced total mitochondrial DNA in five sporadic PD patients and observed different point mutations in a subunit of complex I in each patient. Subsequently, a mutation was detected in the gene that encodes for the protein α-synuclein in a family (Polymeropoulos et al., 1997).

In some hereditary forms of PD, mutations in parkin and ubiquitin C, are responsible for the development of rarer hereditary forms of PD (Chung et al., 2004). N-synuclein is a protein located at the presynaptic terminals and plays an important role in the vesicular release of neurotransmitters, axonal transport, and mechanisms of autophagy (Ben-Gedalya et al., 2009, Koprich et al., 2011). This gene mutation may alter the structure of α-synuclein, making it more prone to self-aggregation and therefore difficult to be destroyed by proteasomes (Polymeropoulos, 1998) and this may result in PD by oxidative damage (Jenner & Olanow, 1998). These findings confirm that a single mutation of α –synuclein can induce PD.

Environmental as one of factors of Parkinson`s Disease. (2021, Oct 31). Retrieved from http://envrexperts.com/free-essays/essay-about-environmental-one-factors-parkinsons-disease 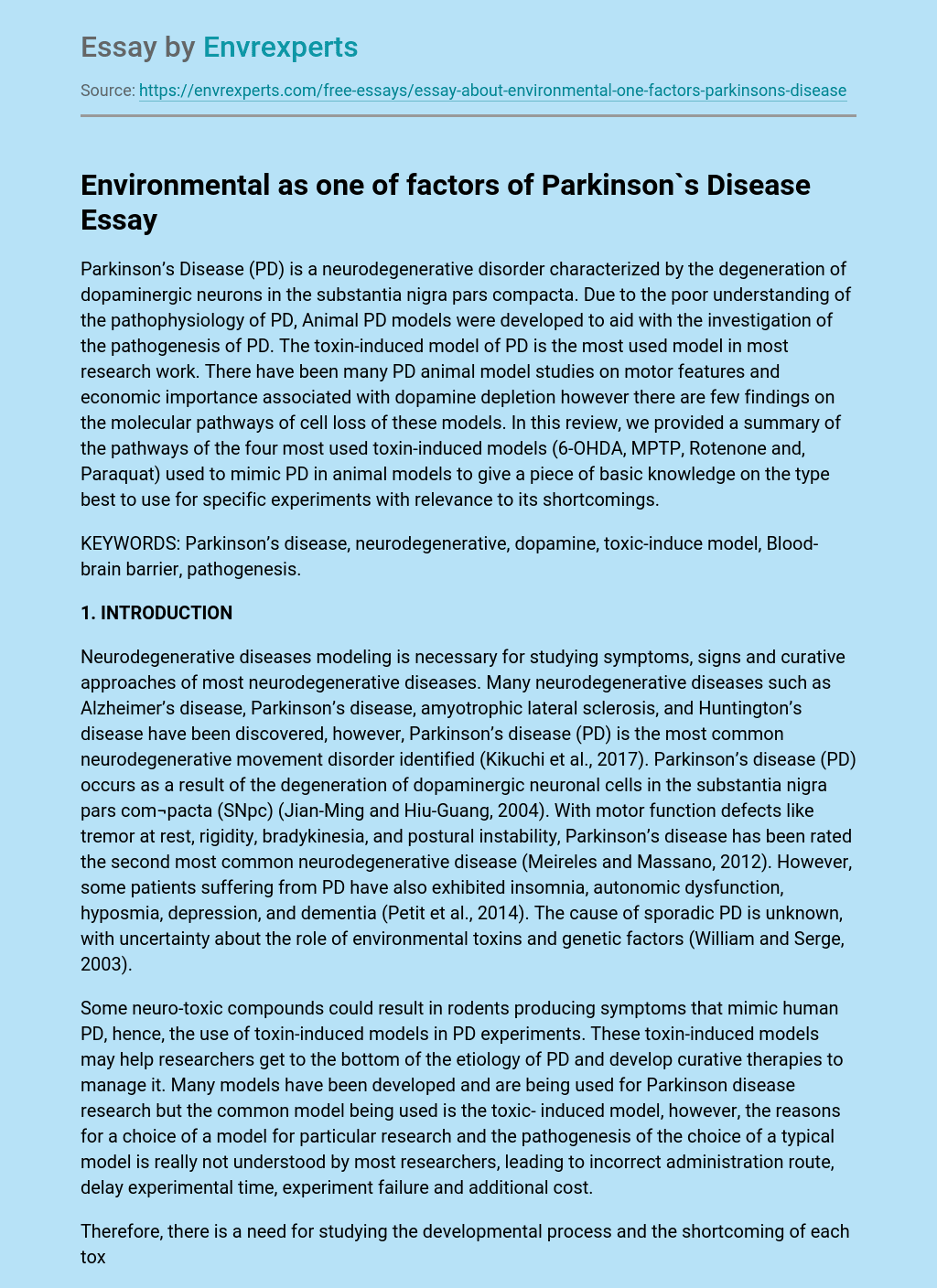