Environmental Pollution And Its Effects On Humans

Environmental pollution is a term that refers to all the ways that human activity harms the natural environment. It is one of the most serious problems facing humanity and other life forms today. Thick, brown haze wraps around cities. Unwanted tires, appliances and other refuse float in streams. Oil spills kill thousands of wildlife each year. All of these are examples of environmental pollution. Many of the health problems on the increase today are directly linked to how we are treating the environment.

Don’t waste time
Get a verified writer to help you with Environmental Pollution And Its Effects On Humans
Hire writer
$35.80 for a 2-page paper

Air pollution is defined as the contamination of the air by such substances as fuel exhaust and smoke. It can also be produced naturally when forest fires and volcanic eruptions shoot gases and particulates into the air and rain and wind scatter the particulates. The atmosphere consists of nitrogen, oxygen, and small amounts of carbon dioxide and other gases and particulates. Particulates are tiny particles which may be liquid or solid matter. They may be visible or invisible particulates.

To keep the air in balance, plants use carbon dioxide and produce oxygen. Animals use up oxygen in return and produce carbon dioxide through respiration. Air pollution occurs when the natural processes can no longer keep the atmosphere in balance. Then air pollution turns clear, odorless air into hazy, smelly air that harms human health, kills plants, and damages property.

Scientific Methods: Air pollution is particularly prevalent in metropolitan areas. One such area, Azusa, California, is notable for frequently exceeding both federal and state ambient air standards for ozone and particulate matter.

Noticing this trend, William J. Mautz, a professor at the University of California Irvine, investigated this trend and performed an experiment to examine the potential for development of cumulative respiratory tract injury in people who are repeatedly exposed to mixtures of air pollutants containing oxidants, acids, and fine particulate material. The atmosphere in Azusa and surrounding communities contain complex mixtures, both in terms of size and chemical composition of the ambient aerosol and the concentrations and ratios of gas phase photochemically active compounds such as nitric acid, nitrogen dioxide and ozone. The study was undertaken to examine, under controlled conditions, the effects of 6 month exposure to an atmospheric condition modeling the ambient atmosphere in or near the city of Azusa, California. The mixture and exposure protocol of the experiment were based on air monitoring data in a heavily polluted region in South Coast Air Basin of California.

In this experiment laboratory rats (male, barrier-reared and specific pathogen free Fischer 344/N) were exposed to a mixture containing ozone, nitrogen dioxide, nitric acid vapor, ammonium bisulfate aerosol and carbon particles. Groups of rats were also exposed to .3 ppm ozone alone, and as controls, they were exposed to purified air. The exposure pattern was in episodes of 4 hr/day, 3 days/week. An initial 1 month dose-response exposure was performed using this 5 component mixture and including component concentration factors of .5(low), 1.0(med), and 2.0(high) of the levels used in the 6 month exposure. At the end of the 1 month dose-response exposure, at the end of the 6 months exposure, and. 1 month following the 6 months exposure, the biological effects on a variety of respiratory tract structural and functional measures were analyzed. Biological endpoints expected to be indicative of processes leading to the development of lung diseases were measured immediately following the end of the 1 month does-response exposure and at the end of and one month following the 6 month exposure.

Data: The 6 month exposure to the mixture induced and elevated breath frequency on the third days of episodes, and at end-exposure, there was a depression of mucus(glycoprotein) density in the tracheal epithelium, increased numbers of mast cells in lobar bronchi, elevated cell proliferation in the terminal bronchioles and alveoli, depression of pulmonary macrophage Fc receptor binding capacity, trends of increased permeability of the nasal epithelium, and decrease in long-term particle clearance rate (Mautz). Exposure to 03 alone did not significantly alter these variables. Both the mixture and 03 alone produced trends of change in morphometric measures of lung fine structure and in alterations of fixed lung volume (Mautz). All of the significant effects of the mixture showed recovery at 1 month post-exposure except for elevated mast cell numbers in lobar bronchi and cell proliferation in the alveolar zone. Trends of change in lung morphometric variables in the mixture and 03 exposure were still present at 1 month post-exposure. Although comparisons of effects of the mixture on biological variables were associated with mean values for 03 exposure groups lying intermediate to mixture and purified air control means. In these cases there was nearly always no significant difference between the mixture and 03 groups. This pattern of results suggests that a small O3 effect was present, and the mixture components with O3 stimulated a larger effect. The changes observed suggest that continued episodic exposure to the mixture can result in continued irritation of lung tissues and can reduce pulmonary defenses including the barrier to infectious organism and allergens, immune defense, and particle clearance (Mautz). This is consistent with hypotheses linking pollutant exposures to increased risks of lung infections, stiffening of the lung tissues and release into the lung of inflammatory mediators and other serum-factors.

Discussion of data: The study did not include additional groups of animals exposed to all the separate subcomponent gas and particle compounds of the multi-component mixture. Therefore it is hard to pin-point if there is a specific component of the mixture that is more hazardous to humans. Recent epidemiological studies suggest that particulate air pollution is a critical factor effecting air pollution on human mortality and morbidity. Also, while the composition of particulate air pollution is complex and the interaction of components in mixtures of compounds may be of toxicological importance, future investigations should include single component and simple mixture of components so that the interpretation of results can determine which components are producing toxic effects.

Another problem with this experiment is comparing like with like. (HE&W) In this particular experiment they used laboratory rats, and although they're biological make-up is similar to that of humans, it is not an exact match. Also, the place in which the experiment was conducted was an optimal region with high levels of ozone and particulate matter. Thus, the effects are therefore more hazardous than in other parts of the country and the world.

Summary: Air pollution and its effect on our health is a subject that surrounds us everyday, literally. As was presented in the experiment by William Mautz Air pollution is not good for anyone. It is not good for your lungs to be inhaling smog or fine particles no matter how healthy you are. Such laws and regulations like the Clean Air Act have been implemented to decrease the amount of air pollution and ambient particles. Although these regulations have had some effect on the amount of pollution, there is still more that needs to be done. I feel the most satisfactory long-term solutions to air pollution is the elimination of fossil fuels. Even though the previous statement is easier said than done, even the smallest decrease in our dependence in fossil fuels can have an even larger effect on the reduction of air pollution.

Environmental Pollution And Its Effects On Humans. (2021, Oct 31). Retrieved from http://envrexperts.com/free-essays/essay-about-environmental-pollution-and-its-effects-humans-2 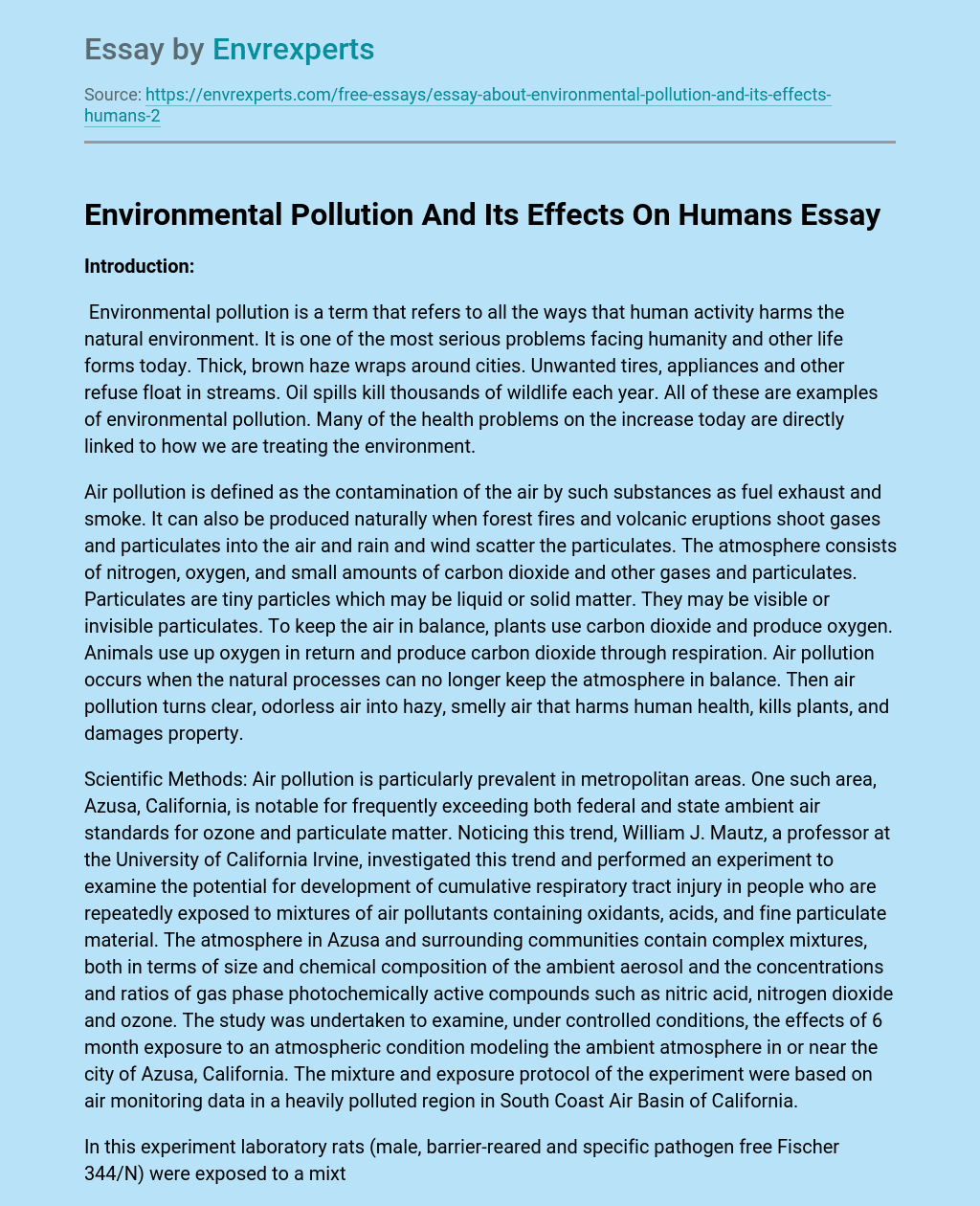