Acid rain is the popular term, but the scientists prefer the term acid deposition. Acid rain can have adverse effects on the environment by damaging forests or by lowering the pH of the lakes and making the water too acidic for many aquatic plants and animals to live.

Don’t waste time
Get a verified writer to help you with Environmental Problem – Acid Rain
Hire writer
$35.80 for a 2-page paper

The father of acid rain research is an Englishman named Charles Angus Smith who suggested in, 1852, that sulfuric acid in Manchester, English, was causing metal to rust and dyed goods to fade. One source that causes acid rain are fossil fuel. Fossil fuel has many usages in our society. Such as to power electric power plants, industrial boilers, smelters, businesses, schools, homes and vehicles of all sort. These various energy sources contribute 23.

1 million tons of sulfur dioxide and 20.5 million tons of nitrogen oxides to our atmosphere worldwide. When fossil fuels are ignited like oil and coal, they release carbon dioxide, a so-called greenhouse gas that traps heat within the earth's atmosphere which causes global warming that is taking place right now.

Also, it releases sulfur dioxide, nitrogen oxide and various metals (mercury, aluminum) that are released into the atmosphere that reacts with other airborne chemicals (water vapor and sunlight) to produce sulfuric and nitric acid which later can be carried long distance from their source and be deposited as rain (acid rain) but acid doesn't just came from rain but also in the forms of snow, hail, fog, and mist.

Forests are a complex ecosystem that involves trees, soil, water, the air, climate, and other living organisms that support the community of wildlife: animals, birds, insects and plants and also a major economic resource. The countries hardest effected by acid rain is in the European countries, yet central Europe face a much greater threat since it has a large amount of forest area and about 8% of German's forest face the lethal effect of Waldsterben or forest death of acid rain. Acid rain kill about 50 million hectares of forest that have been damaged in Europe and in Central and Eastern Europe's thousands of tons of pollution each year that 14,000 lakes are unable to support sensitive aquatic life. Acid rain does not kill trees outright but weakens them to the point where they become susceptible to extremes of heat or cold, attacks from blight-causing or from inserts such as the gypsy moth, and other environmental stresses.

The problem of acid rain is caused by burning of fossil fuel that emits SO2 and industrial factories from the North America that emits pollution that travels to Europe. Acid rain is now becoming a growing problem in Third World countries such as China and India due to rapidly expanding populations where energy demands are increasing.

Thus, the rate of fossil fuel consumption has greatly increased and where pollution controls are all non-existent have greatly to their problems with acid rain. Yet, most emissions are primarily located in eastern North America, Europe, and China. That is why acid rain is so threatening because it is concentrated and it has a devastating effect on soil because most of the trees get their nutrients from soil, which lakes, ponds, streams, and other waterways, which receives runoffs from soils uphill which humans.

When gets into the lakes and river it destroys all living things and declines in populations of fish, aquatic plant life and micro-organisms. Fish just goes extinct because they simply fail to reproduce and become less and less abundant, and older and older, until they die out. Changes in the biology of the provided one of the first clues to the problem of acid pollution is linked between the acidly of lakes and fish production. In the Ontario Ministry of the Environment reported that 140 acidified lakes in the province have no fish at all, and a further 48,000 lakes would not be able to tolerate extended acid inputs.

There are three stages in the acidification of surface water. The first stage is bicarbonate ions neutralize acids by reacting with hydrogen to produce carbon dioxide and water. If the bicarbonate content is maintained at a critical minimum level, the pH value of the water will remain stable, and plants, animals and micro-organisms will be unaffected.

The second stage is when the bicarbonate content drops below the critical level, and large influxes of hydrogen ions can no longer be neutralized. The pH value begins to go down faster than before this will disrupted the organisms and young fish. The third stage comes when the pH value stabilizes around 4.5. Almost all the original life is eliminated for example snails, many insects and fish disappear. The water becomes abnormally clear, but some lakes can be neutralize the acids with limestone.

Destruction of forests and lakes are not the only the cause of acid rain, but corrosion of buildings and monuments are also affected by the acid rain. Almost every building of a major urban or industrial center may be at risk from the corrosive effects of acid deposition and the rate of corrosion has increased dramatically in many urban areas. The Athenian monuments is getting worst in the past 20-25 years result of pollution. Most of the corrosion of the city buildings and monuments is the result of the dry deposition of SO2 and sulphate particles, mainly cause by urban concentrations of pollutants. When the sulfur pollutants fall on the surface of limestone or sandstone, they can react with the calcium carbonate in the stone to form calcium sulphate (gypsum), which sticks to the stone. This will cause flaking that can be washed away by rainwater, exposing more stone to corrosion and also gypsum and soot particles cause black crusts on buildings surface. Acid attack can also lead to stone decay through the creation of salt, which can crystallize and force apart mineral grains, causing the stone to disintegrate, salt can expand and contract thereby weather the surface.

Mainly this is cause by the release of sulfur and nitrogen oxides by cars and industrial. As our society get more advance there is also the effect of pollution that rises, to stop the effect we need to find alternatives way to stop car emission with new fuels and slowly removing fossil fuel that causing most of the nitrogen oxides. The government need to put stricter laws on the industrial that pollinated and removing harmful chemical from the earth.

People should find a efficiency and alternatives way to stop the pollution that is happening around the world because the effect can be seen all round us starting with the forest, lakes and in the heart of our city where the buildings and monuments are being eating away by pollution. 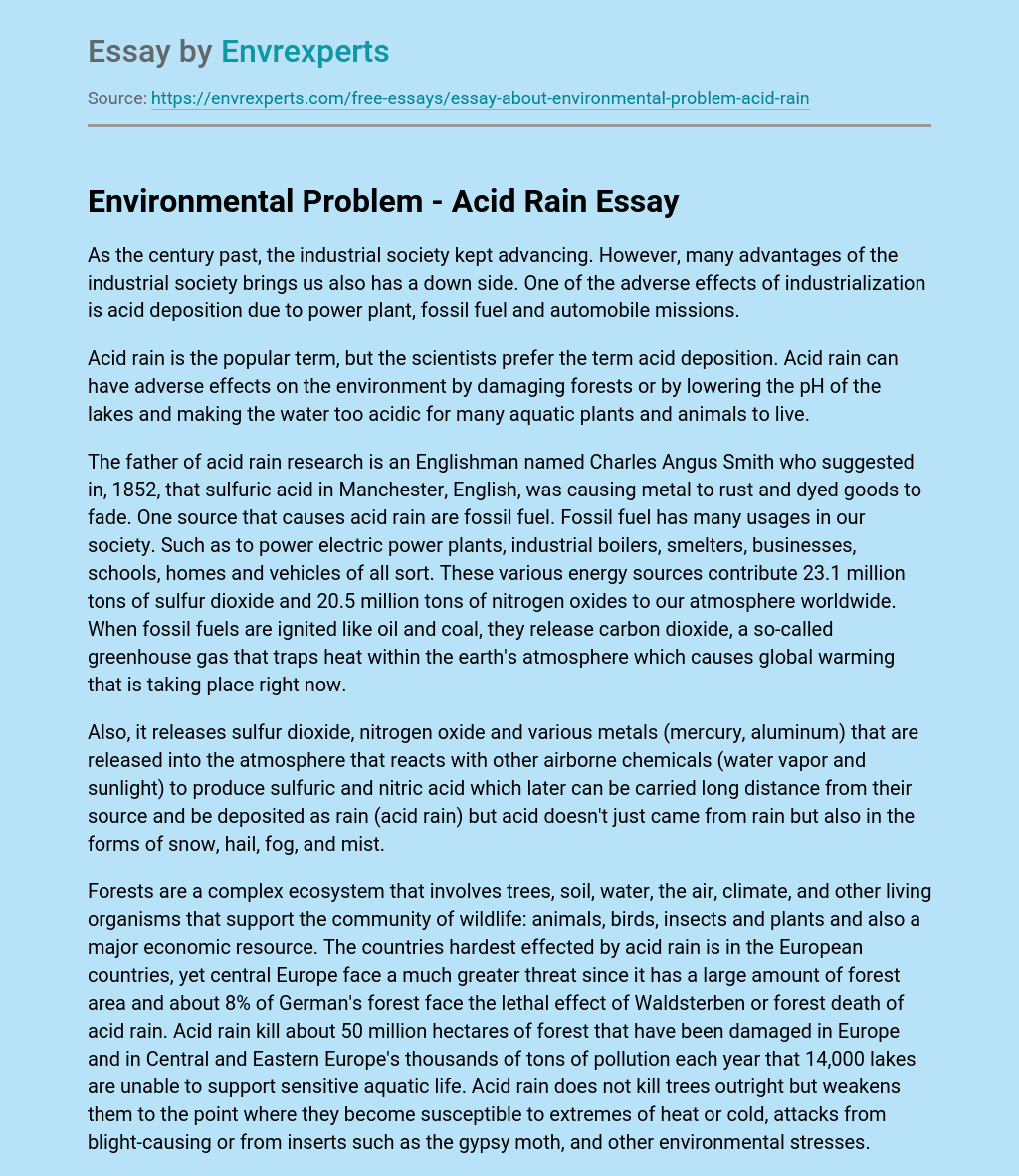