Global capitalism refers to an economic system and a method of production in which industries, trade, and means of production are mostly owned by private investors and corporations for profits. In a capitalist economy, capital accumulation, stiff compe markets and wage labor are common to the parties to a transaction. Even as capitalism and democracy increase human wealth, leading to an improved lifestyle, nations should regulate their industries and agricultural production so that they become environmentally friendly. This essay is thus about how capitalists strive to maximize profits with environmental conservation as a critical issue.

Don’t waste time
Get a verified writer to help you with Environmental Responsibility in Global Capitalism
Hire writer
$35.80 for a 2-page paper

In my reading, the stronger governments may be disadvantaged when they implement policies that work towards environmental responsibility. The regulations are for avoiding pollution and encouraging recycling. Their weak counterparts may continue with the whole idea of environmental degradation; hence producing cheaper products. The result is unfair competition in the world market. (Rolston, 2012, p. 2) For fair competition, both the strong and weak governments should enforce regulations that would ensure the industries only carry out production activities that are friendly to the environment.

China's current advancement in its economy shows its willingness to trash its environment for earning profits and exposing its citizens to a lot of health risks. The author of the book "a new environmental ethics" states that coming out of poverty requires an efficient state to enforce workers rights and environmental health. Without the implementation of such policies, workers may suffer from pollution, especially those from the air and water. Health problems are not only meant for the poor who, in this case are the workers but also the rich who suffer the consequences of pollution caused by the environment.

Trading blocs such as the World Trade Organization have been against the environmental regulations by their member states. Capitalists are also up to the point that environmental concerns do not directly affect international entrepreneurs as capital will flow to the poorer countries. The investors argue that the development in poor countries would make them rich enough to afford environmental protection after some time. The environmental race seems to be moving to the bottom instead of heightening. Capitalists should find ways of maximizing profits for their businesses while keeping in mind the whole concern of environmental conservation.

The world Trade Organization has not considered the consumption of genetically modified foods to be of a discussion in the health sector. The trading bloc argues that so long as the food is safe for consumption, there is no need for raising an alarm. The only advice the trading bloc gives is for consumers to boycott the products if they wish. Such misunderstanding brings confusion to the users who do not know which direction to take considering consumption of certain products. Statements that are issued by capitalists regarding their products make consumers have the notion that environmental conservation is a voluntary activity. Ever since, voluntary programs have never been done to the best, and that is the case in voluntary environmental protection. (Rolston, 2012, p. 3).

A major problem with globalized capital based development is that the rich grow richer as the poor become poorer. Capitalists have continued to look for cheap labor in order to maximize their production. Such global inequalities created by capitalists have made the attempts to secure the environment unsuccessful. Wealth is inappropriately distributed leading to a gap between the economic statuses of nations. (Rolston, 2012, p. 3) It is unethical to conserve nature but fail to take full measure of the distribution of the benefits of exploiting natural resources. The overconsumption among the rich developed countries and under -consumption among the poor in developing nations is a cause of environmental degradation in both the sets of nations. The escalating consumption patterns with changes in population growth continue to create a difference in the state of the environment. Utilization of natural resources in countries varies, depending on the population and the consumption patterns. The author of the book also explains how both the developed and underdeveloped countries suffer from environmental degradation in different capacities. (Rolston, 2012, p. 5)

Social fairness is associated with environmental protection and a more fair distribution of the world's wealth is needed for the environmental preservation to last. Both the wealthy and the environmental ethicists are faulted for overlooking the poor in their concern to save the elephants. The setting aside of the biodiversity reserves and forest reserves makes the poor more unfortunate as the wild animals cause destruction to plants and crops in the areas inhabited by the poor people. Such damage to crops may be a source of environmental degradation in the areas. The crops and vegetation play an important role in the control and prevention of soil erosion that causes water pollution. The silt deposited in water bodies will not only have an impact to the poor but the wealthy as well. Sediments cause clogging of water pipes that are used globally hence affecting everybody. (Rolston, 2012, p. 6)

It the book, it is noted that international markets and religion are the two places where humans learn a sense of global concern and fairness. The dimension of faith is expected in the world religions that compare individual behavior with the act of compassion and respect for human beings. In Christianity and Buddhism, for instance, fairness in markets would be encouraged to show concern for the poor. (Rolston, 2012, p. 8).

The dimension of religion in environmental conservation should be given a priority in order to show respect for the gods. Global fairness would ensure that the developed countries carry out activities that do not lead to unfair competition in the world markets. The same would apply to the developing countries who should not take advantage of the opportunity they are given to production. Locally, fair trading can be reinforced by punishing the breakers of the laid rules and regulations. In international markets, the implementation of punishment for law breakers is hard. Thus, it is upon the competitors to promote the peaceful existence and fair competition. For such to exist, religion plays a significant role in guiding those involved in the transactions.

In conclusion, as capitalism teaches anyone never to be satisfied with their income, and instead promote endless growth, environmental conservation should also be brought to a high gear. The escalating consumption in developed countries and an increasing world population, in general, should be a motivating factor in controlling environmental degradation. We ought to be reminded that the escalating numbers of people, who would if they could, work together in preventing and controlling environmental pollution. It is through the efforts of everybody that the beautiful environment will be preserved even as production activities are growing. 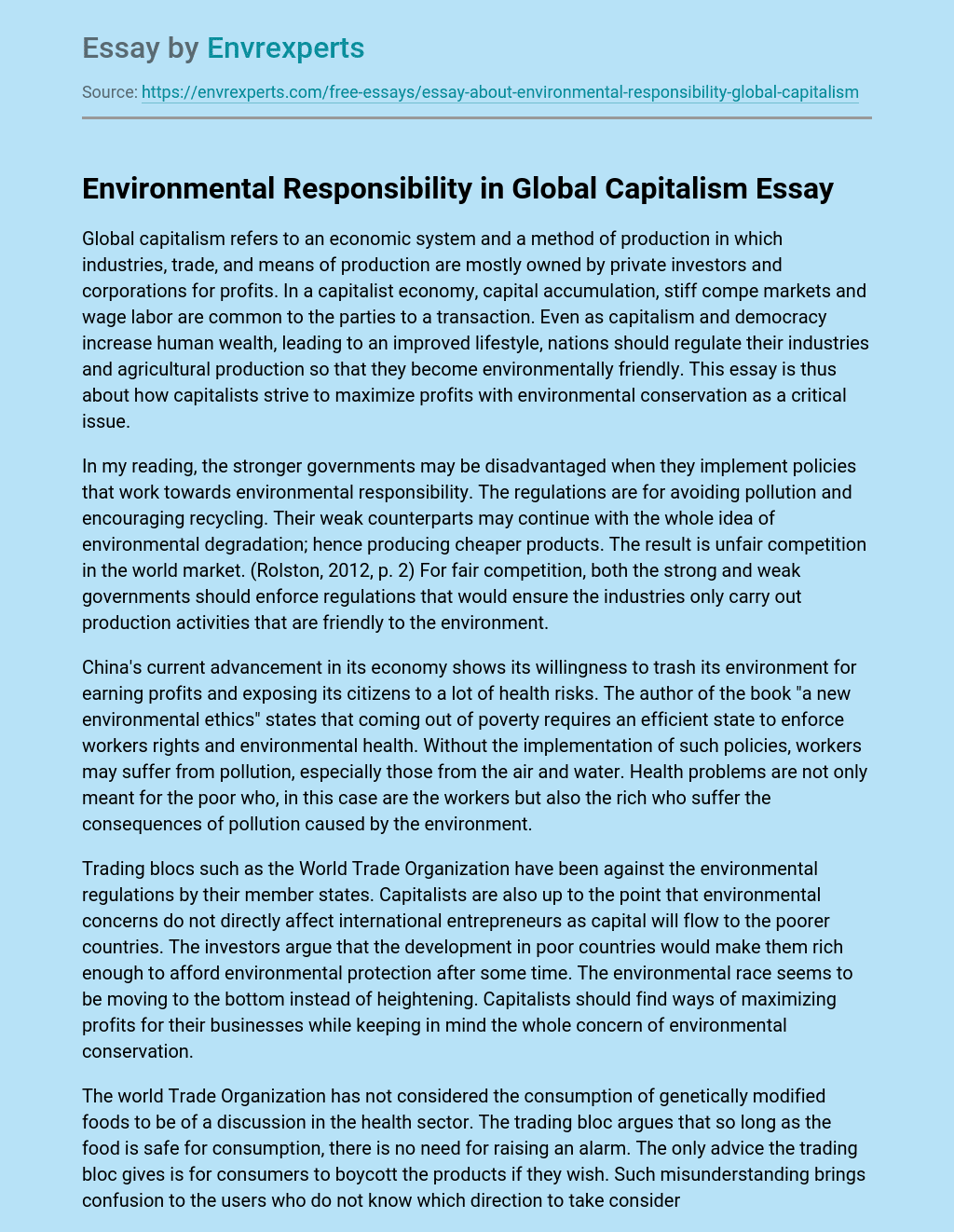