Environmental science is the field of science that studies the interactions of the physical, chemical, and biological components of the environment, the relationships and the effects of these components with the organisms in the environment. Humans have been using environmental products past the 1600s. We began to look more into the science of nature and how humans many alterations of the planet have taken a toll on this planet. Today, in the 21st century, humans are still pinpointing, observing, using trial and error, and constantly collecting data to help us express information to almost 8 billion people on this earth on why environmental science is so important.

Don’t waste time
Get a verified writer to help you with Environmental Science: Ecology
Hire writer
$35.80 for a 2-page paper

Ecology is a branch of environmental science that investigates the relationships between the environment of an organism and how they interact with one another. Ecology is then broken into smaller studies as well. A study on an individual species would be labeled as autecology and the study of groups of organisms is classified as gynecology.

These individual studies expanded from studying bacteria to mushrooms. Each scientist soon became classified by a name, for instance, a scientist who studies plants would be classified as a botanist, ones who study birds are an ornithologist, rocks are a geologist, water is hydrometeorology, insects are entomologists, etc. Ecology is more spoken out to be a new study, dating back to only the 20th century. Nonetheless, the general ideas of ecology have been around for a long time. The ecological thinking developed gradually throughout the millennia and had many connections with other environmental situations and biological disciplines.

With, the actual first man to have opened the general idea of ecology may be Aristotle.

It was in the BC era where Aristotle (384-322), an ancient Greek environmental philosopher and scientist who studied the weather, was the starting branch of weather forecasting. Following his studies, a book of weather forecasting came out, “The Book of Sigma”, and following that many other natural philosophers and scientist continued to expand their studies on weather conditions of the atmosphere using many types of instruments, maps, and charts. The natural phenomenon was a direct study that became important to many scientists today. Aristotle and Theophrastus (one of his students) also had a fascination with many species of animals, plants and their interrelationships. Environmental philosophers are concerned with the natural environment and the humans placed within it. They look more in-depth with questions such as,” what is the value of the natural, non-human environment to us, or itself?” and “How should we respond to environmental challenges such as environmental degradation, pollution, and climate change?” (wiki, para. 1)

Having individual studies help scientists to educate themselves more graphically on that specific species and/or natural substances. Eventually, this branched into “where does the species or natural source live?”, “why do they live here and not there?”, or “Why does this plant grow better here than there where those other plants live?”. In the mid-1800, this became a new discipline in the science community called ecology. In ecology, it looks at all biological and any non-biological factors. These factors describe species a little more in-depth and explains both their physical appearance and how they adapt to other ecosystems. Ecosystems are a biological community of interacting organisms and all their physical environments. The term ecology was coined by Ernst Haeckel.

Ernst Haeckel was a German zoologist, biologist, philosopher, physician, professor, and one who named many species throughout the late 1800s – early 1900s. Haeckel was a strong follower of Darwinism and proposed new aspects of evolutionary decent within mankind. Ecology was originally named “oekologie” to the statement, “relation of the animal both to its organic as well as its inorganic environment.” This name came from the Greek word oikos and this means “home” or “place to live” In Ecology it deals with the relationship between species around the world and their physical surroundings, the population numbers between a certain individual and population within distinct species, and how they all interact in the same environment to form an ecosystem. “Ecology has been defined variously as “the study of the interrelationships of organisms with their environment and each other,” as “the economy of nature,” and as “the biology of ecosystems.”(Ecology. Written by Stuart L. Pimm and Robert Leo Smith)

Charles Darwin was an inspiration to many scientists just as one previously mentioned, Ernst Haeckel, He is the well-known “father” of evolution. Though many think he is, he is not the only nor the first man to discover and investigate evolution. He was in fact aided by the previous scientist before him. For example, a man named Jean-Baptiste had a theory of “transmutation of species.” (Wikipedia, para.1) He presented this in 1801. If Organisms change characteristics in order to adapt better to their surrounding environment, they will give those traits to their offspring was Lamarck’s belief. This was the actual first formed theory of evolution. Charles Darwin soon came along in 1858 with Alfred Russel Wallace (British naturalist, explorer, collector, anthropologist, and political commentator) and published the new evolutionary theory, explained fully in his book “Darwin’s On the Origin of Species”, in 1859. At the time, in the 1800s, valid information on any research was non-reachable and Darwin had to base his findings off any other previous information he was taught. At the Whipple Museum of History of Science at the University of Cambridge, they have a display of Charles Darwin in their explorers and collections section.

Environmental science, what is it? It is the way humans, groups of animals, natural substances, bacteria, and chemicals react with one another on a day-to-day basis. Environmental science doesn't just include one but many topics. Conservation, biology, preservation, sustainability, and ecology. What is Ecology? Ecology is a branch of environmental science that investigates the relationships of an organism's environment and how they interact with one another. The United States has grown largely compared to what it was. Environmental science has been around since the beginning of time, and so has ecology, we just couldn’t define it completely. Ecology has taught us a lot of biodiversity meanings and sources that are important for us humans get closer with the rest of the environment. It is very important for every individual to know who we share this planet with. This worlds environment doesn’t only benefit the rest of the planet but what it gives to all the human being on this earth.

Many creatures provide us with medicine, equipment for weapons, houses, clothing, water, air and much more. If we didn't know what each animal consisted of we probably would have never begun to expand as much as we did during the big industrial times. If it wasn't for environmental science, would technology and agriculture be of big as it is today? Many people today will have different Opinions on the topic of environmental science Due to ignorance or just not caring. Everyone is entitled to their own opinion but, when it comes to having factual evidence that has been studied for centuries you can't deny that environmental studies aren’t important. Environmental science isn't just important to scientist or conservationist or anybody else who does this type of study for a living, it's important for us all to contribute. We should all know something, even the trivial things about our environment because without that our planet would not be where it is today. 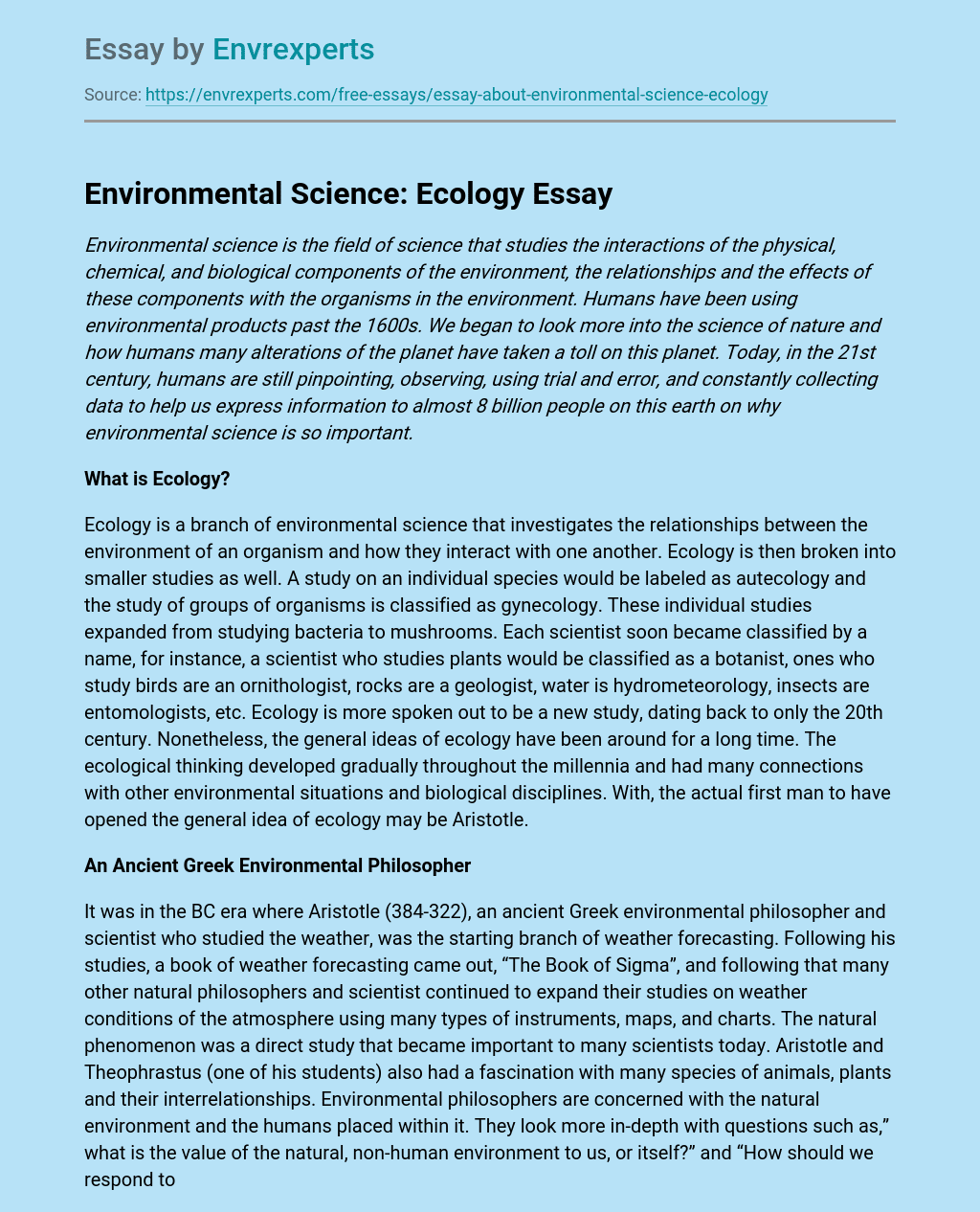