An Examination of Biodiversity and Its Benefits to Life

In the world that we live in there so many variations that appear in almost every form of life. Still, variation goes beyond living things to also include non-living things hence the general term "diversity." As the interaction in life goes on due to the differences that exist among the things in the world, certain benefits are realized which ultimately lead to promotion of quality life among the living things. In this paper, we shall examine how Biodiversity brings about benefits to life.

Don’t waste time
Get a verified writer to help you with An Examination of Biodiversity and Its Benefits to Life
Hire writer
$35.80 for a 2-page paper

Biodiversity simply means the variations that exist in the characteristics of living things. IUCN (2009) defines it as the variety of life on earth. Emphasis will be laid on specific examples.

There are many benefits that Biodiversity brings about. One such example is promotion of health of living organisms through life promoting human activities. The present man has developed an interest in protecting every living organism through control of risks that are imminent to creatures on the earth.

For example, the wildlife animals and plants are nowadays highly protected which gives hope to continued life. Extinction of such animals through activities such as poaching is therefore highly checked.

The difference that exists between the feeding habits between plants and animal ensures supply continued supply of food. Plants manufacture their own food through photosynthesis in which case carbon dioxide is used. Plants on the other hand supply the same carbon dioxide needed by the plants. Apart from ensuring that there is food supply on the earth, a balance between the amount of oxygen and carbon dioxide present is also realized.

This is a great benefit as a result of Biodiversity.

The idea of going green that borrows from the idea of Biodiversity is also a very beneficial one to the world of business. Most firms nowadays embrace methods of operation that also promote the environment, for example, the use of emails as opposed to letters that reduces the use of paper which could have otherwise seen too many trees being cut down in order to manufacture paper. This is what is referred to as minimizing the risks and impacts of our actions to protect sensitive species, habitats and ecosystems. (IUCN, 2009).

A proper control of pests has also been made possible because of the diversity that exists among the living and even non-living things. In certain areas such as the Maasai Mara National Park in Kenya, certain birds which feed on ticks hover around animals as they pick the ticks from the cattle. This gives man a chance to concentrate on other things that are productive. The manufacture of pesticides is also done with the consideration of the fact that other "innocent" micro-organisms can also be affected hence avoiding arbitrary destruction.

Improved stains of living things (species) can also come up due to Biodiversity. According to IUCN (2009) characteristics such as improved productivity, resistance to diseases and ability to adapt to climatic changes are brought about through cross-breeding. The existence highly productive animals such as the Friesian came about as a result of this, hence a plus for Biodiversity.

Biodiversity also plays a role in protecting and conservation of the environment. Practices such the cutting down of trees which are being highly discouraged have been known to be detrimental to the environment, by interfering with the supply of oxygen, carbon reduction, the rain and even interfering with the ozone layer. By being Biodiversity conscious, many countries have now managed to reclaim a good environment (IUCN, 2009). For example, the settlement of squatters in Mau Forests in Kenya is one of the major debates now since the forest is known to be one of the major water towers.

Diversity in life has seen into many healthy discoveries such as medicine which has led to improved human life. In East African countries, for example, the use of herbal medicines to cure numerous diseases has not only gained momentum but also surmountable popularity. Such an observation is made by Shah (2011) when she says that if our Biodiversity is rich, then we shall have a greater opportunity for medical discoveries, economic development and adaptive responses to climatic changes.

According to Shah (2011), natural sustainability is also brought about by Biodiversity. This is through the existence of a greater variety of species. Looking at the example of controlled fishing, we can ensure that sea creatures' existence is not threatened. This can therefore mean that, not only shall we enjoy eating fish but also the supply will always be regular and assured. This might however not be the case if careless fishing was allowed.

Natural services are also made available to human beings through diversity. It is observed that activities such as formation of soil, recoverable from unpredictable events such as earthquakes and floods and nutrient storage and recycling are enhanced only through sound management of the Biodiversity that exists. (Shah, 2011).

Social benefits are also realized through Biodiversity. According to Shah (2011), Research, education, tourism and cultural values are greatly enhanced through Biodiversity. In Tanzania for example, the co-existence of a diverse number of species in the National Parks has been an attraction to many tourists which brings about other benefits such as sharing and exchange of knowledge and information.

Entertainment is also another are that we cannot put aside as far as Biodiversity is concerned. Animal and human movies have been made much interesting when the setting is allowed to be just as natural as possible. The interaction or the relationship of animals for example in the jungle form very interesting sceneries. When filmed they make good selling.

In conclusion, nature provides for diversity which we must all appreciate and hence embrace in the interest of sustainability of life. It is quite unfair that certain sound-minded human beings have embarked on destructive missions through creation of poisonous gases, bombs and other explosives that not only endanger human life, but the whole universe too.

An Examination of Biodiversity and Its Benefits to Life. (2021, Oct 31). Retrieved from http://envrexperts.com/free-essays/essay-about-examination-biodiversity-and-its-benefits-life 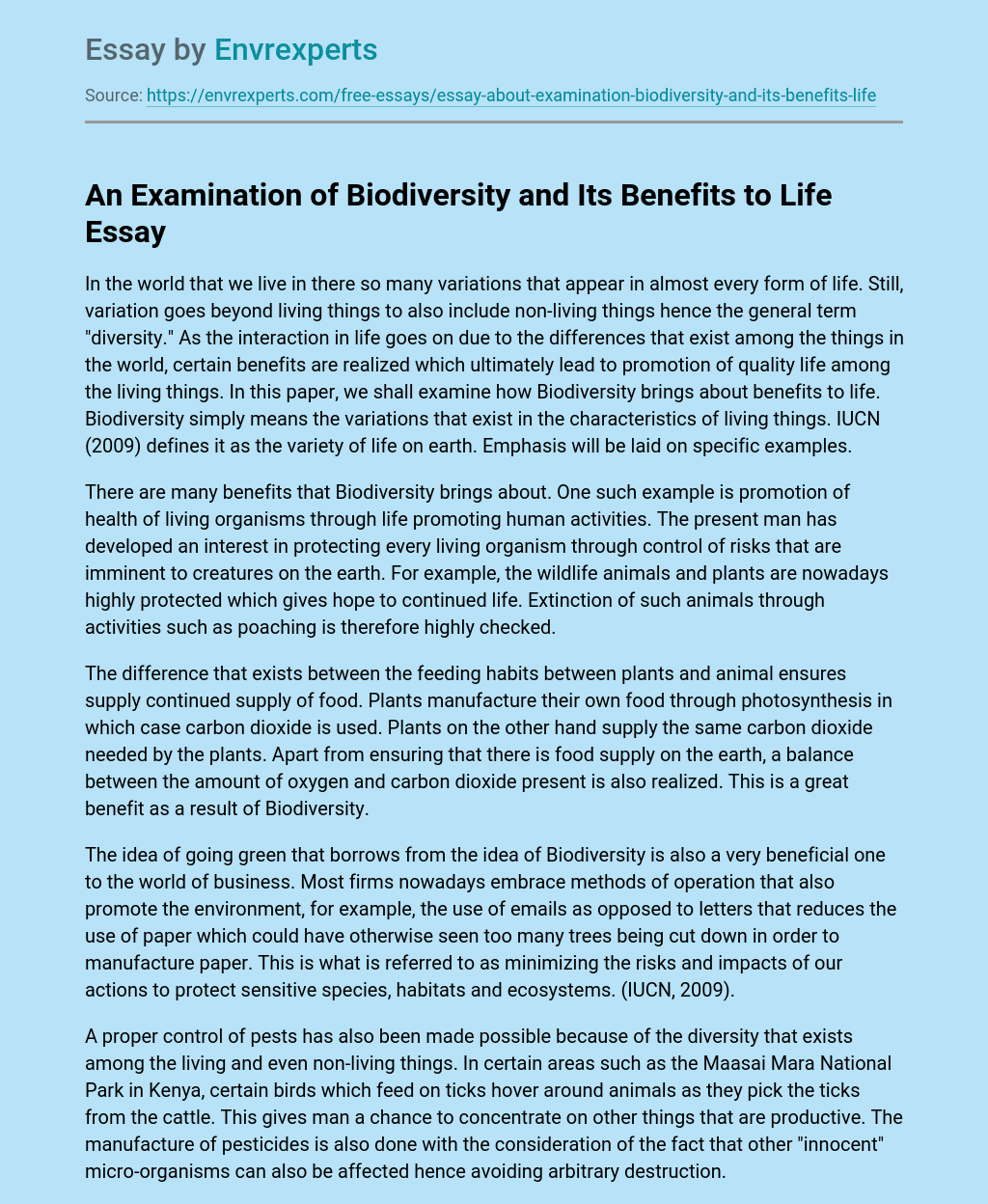