The world is progressively warming at an exponential rate in which soon it could completely catch on fire. Well maybe not that far, but the consequences sure are scary. Global warming-or climate change- is a severe problem in the modern world that was caused by humans and is leading to the death and even extinction of many species eventually including humans too. Some people may deny that global warming is a problem or even real, but science has proven its existence and many people have seen its aftermath themselves.

Don’t waste time
Get a verified writer to help you with Examining the Causes of Global Warming and How To Reduce the Effects of Climate Change
Hire writer
$35.80 for a 2-page paper

There are quite a few factors that led to this warming of the Earth, and almost all are caused by humans.

Global warming is a real problem that the world has been dealing with and is continuing to get worse as time progresses, and the main cause of it is the human race. There is a shielding layer in the atmosphere protecting the Earth from harmful ultraviolet radiation-or UV radiation called the ozone layer.

The United States Environmental Protection Agency (EPA) themselves have said that UV radiation can cause cancer and damages crops and marine life. So logically humans would want to protect this layer to try and stop the damage it can do to all life on Earth, but instead, humans are tearing away at it. Research done by the EPA has proved that the ozone layer is being depleted beyond natural cause due to the use of many industrial products such as aerosols. But there is another factor that is somehow more damaging than the deprivation of the ozone layer, and of course, is also caused by humans. That is the drastic increase in greenhouse gases in the environment. As state by the EPA, greenhouse gases are gases that heat up the atmosphere by absorbing the energy from the sun, and these gases include: carbon dioxide, methane, nitrous oxide, and fluorinated gases. And mankind is mass producing all of these gases. Most production of electricity for the world produces dangerous numbers of these gases as a result, transportation, and even agriculture are giving the same effect. And the reason why climate change was never really a problem in the past is that most of these contributors to the making greenhouse gases are very new and a result of industrialization but come with this great problem. As the United States very Environmental Protection Agency said, these gases are "thickening the Earth's blanket.” Global warming is a very real and serious problem that is only getting worse and worse. Humans are the root of this problem and must make an effort to end the dangerous warming of the globe.

Global warming has done terrible damage to the Earth and its inhabitants, and it plans on doing much worse. Endless species of animals have been knocked down by global warming forced to change their homes and behaviors. However, some were incapable of this and thus have gone extinct. According to environmental scientist Christine Dell'Amore, two amphibian species have already completely died off and gone extinct with climate change holding responsibility. Along with these two extinct species countless other species are in terrible danger and are losing their homes as a result of global warming, and mankind seriously needs to end this. Not only is global warming directly damaging these animals, but there as also side effects that can also lead to problems. Rebecca Selden, a marine ecologist, said that climate change is causing marine life to migrate and different preys and predators are encountering each other for the first time and as Selden said, this can cause "some big ecosystem effects" which are not necessarily good. Global warming is bringing a dark future that can and will include complete extinction for all animals on Earth, and this does, of course, include humans. In Mark Lynas' book “Six Degrees" he walks the reader through what the world would be like as it heats up one degree at a time, but as said in the title it only goes up to six degrees. This is because Lynas believes there is no point to continue after six degrees because after the global average temperature rises six degrees there will be no life left on Earth to known what it will be like. From the destruction of coral reefs to all life on Earth being wiped off like a rag cleaning spilled water. Global warming quite possibly will lead to the end of the world, unless it is stopped.

Lots of damage has already been done to the world and there is still a lot more to come, but how can it be stopped or at least halted? Society probably is not ready for massive changes all at once which although that is what the Earth needs, it is a bit unlikely. The best place to start would be by decreasing the production of harmful aerosols and to stop relying on foam insulation. But even NASA agrees that what will really help out is by cutting down as hard as possible on the production of greenhouse gases. This would for one mean finding a viable energy solution to replace burning fossil fuels. Solar energy, geothermal, and even wind turbines all have the potential to be solutions to this problem. Along with that agriculture and transportation need to be changed to produce less greenhouse gases. Pollution is another big contributor that needs to stop, plastic is being produced and then simply thrown out at unbelievable levels and this is only causing more and more problems that could and should be ended. Along with all that deforestation needs to also end, not only is it taking away the homes of animals but also destroying the Earth's natural way of converting the greenhouse gas carbon dioxide into the oxygen we breathe, something mankind cannot achieve but desperately needs to be done. With the Earth warming at frightening rates, endless consequences are to come, but they can and really need to be stopped.

Mankind is heating up the Earth to the point that the damage done is already irreversible with only more and worse damage to come. Global warming is real and it is a crisis that has killed off entire animal species and crippled countless others and is now coming after humans. But there actually is still hope, society does not need to adapt it needs to change their very environment and fight back against the deprivation of the ozone layer and fight back against the greenhouse gases so life can do what it was meant to do and live on.

Examining the Causes of Global Warming and How To Reduce the Effects of Climate Change. (2021, Oct 31). Retrieved from http://envrexperts.com/free-essays/essay-about-examining-causes-global-warming-and-how-reduce-effects-climate-change 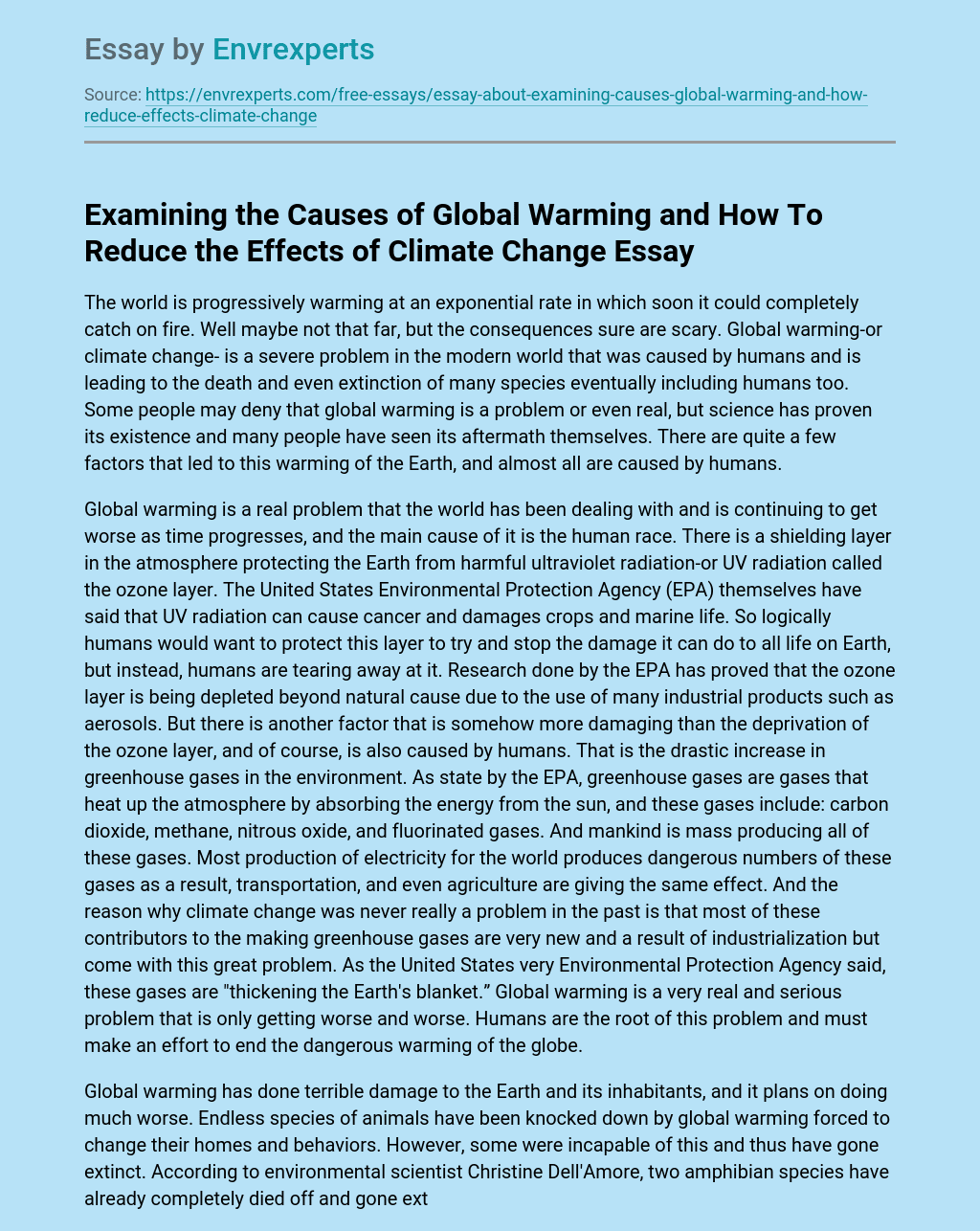