Climate change, the long-term change in the Earth’s weather pattern caused by the increase of greenhouse gasses trapped in the earth’s atmosphere is real. Despite what people may say, it is not a hoax. It has an impact on our health and wellbeing and is a direct result of our current economic system, capitalism.

By definition, capitalism is the “economic and political system in which a country’s trade and industry are controlled by private owners for profit rather than by state” (oxford dictionary).

Don’t waste time
Get a verified writer to help you with Excessive Food Production Threatens Nature
Hire writer
$35.80 for a 2-page paper

In a capitalist market economy, the owner makes all the decisions with profit being the bottom line. It needs a continuous growth of production which is dependent on consumption that is harmful to the environment and puts the planet in danger.

The climate is important to all of us, but capitalist culture and corporate greed are leaving a strong carbon footprint putting it at risk. As Greta Thunberg stated, “we are in the process of mass extinction and all you can talk about is money and eternal economic growth” (Thunberg, 2019).

To answer the question, I would have to say yes, capitalism as it is right now, is incompatible with stopping climate change because of everything that it stands for (neoliberal policies like free trade, privatization, open/free markets, and deregulation), and what drives it (profit and growth).

The system is designed to generate as much wealth as possible without any consideration for the environment. Major corporations are the “backbone of capitalism” (Southwood, 2016).

As few as one hundred, including British Petroleum (BP), Exxon and Shell, are responsible for 71% of the world’s emissions, while companies like Coke, Pepsi and Nestle are the biggest plastic polluters (Riley, 2017).

Extraction of fossil fuels and minerals from the earth, transporting goods from countries that offer the cheapest labour, burning fossil fuels, deforestation for infrastructure and manufacturing are part of doing business for these corporations at the expense of the planet. In the 70’s Exxon Mobil’s own researchers had data showing climate change was a concern and the whole fossil fuel industry needed a change.

Rather than doing something to about it, they chose to ignore in and “invested several million dollars in climate denial” (Valle, 2018). Research shows that almost half of the world’s largest companies are "obstructing climate change legislation" by making donations to buy influence and curb policies in their favour so they can continue making their profits and increase shareholder bonuses (InfluenceMap, n.d.).

Rather than investing in climate change solutions, they are investing in its obstruction. In order to prevent global ecological collapse, we need to create a low carbon economy and turn capitalism green. We need to get rid of free market policies. Private assets such as railways, utilities and energy grids should be put back under public ownership and corporations should be regulated to phase out fossil fuels (Klein, 2015).

Corporations shouldn’t be allowed to influence policies by waving their money around and there should be a restriction in the amount of money they can donate so there is NO influence. Corporate taxes should be increased to pay for new GREEN technologies, infrastructure and clean, renewable energy. As a society we need to consume less, and we need new low carbon solutions that are available for all and not only those that can afford it.

We need to switch to renewable energy (solar, wind and hydro), demand needs to chance so we consume less and reduce waste so our landfills are not overflowing with garbage and our oceans are not filled with plastic waste. We ALL need to change our habits to reduce carbon emissions. In short, capitalism as it is now is incompatible, but if we turn capitalism green, it may have a chance. 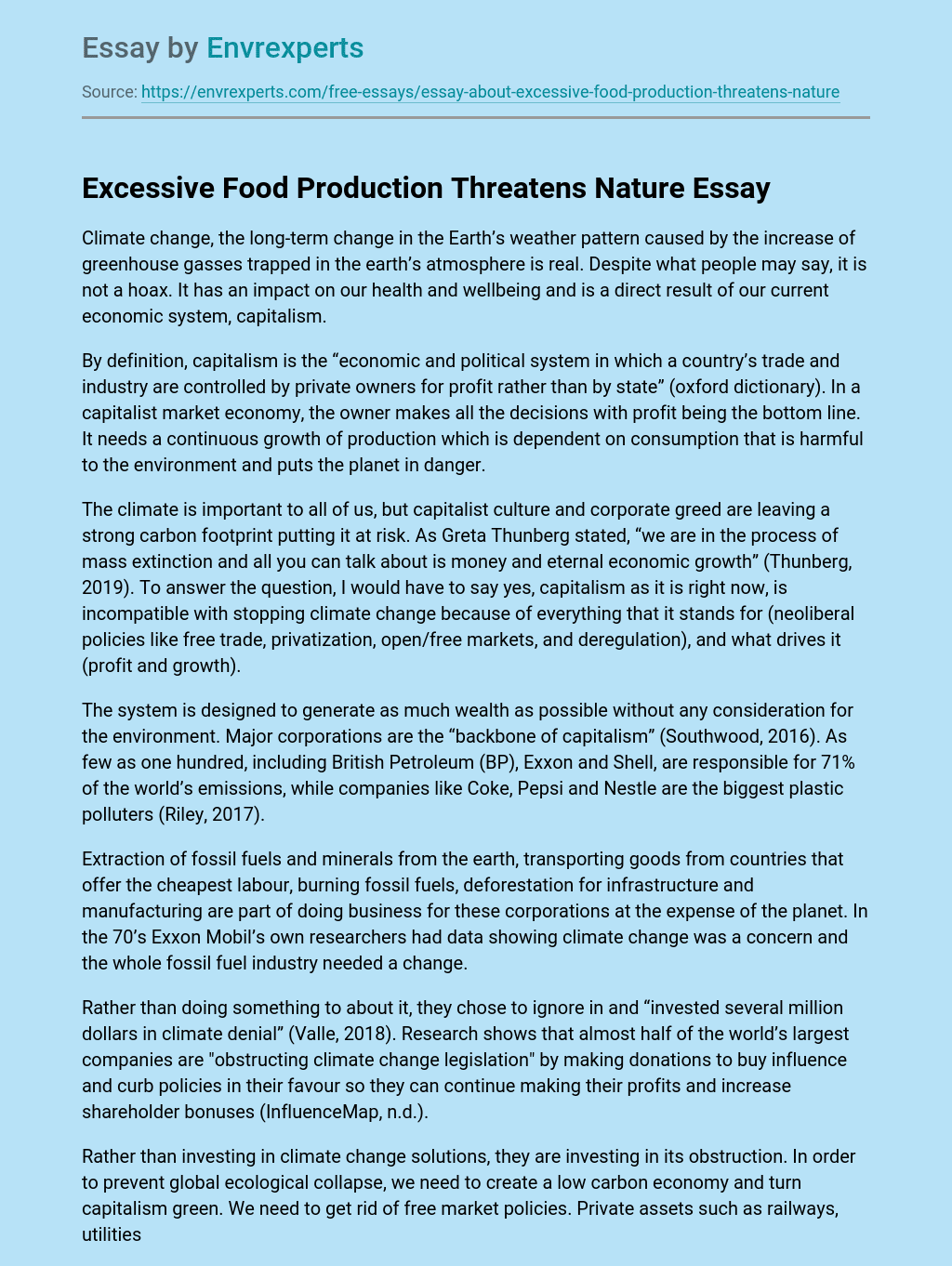