The Features of Acid Rains and Its Effects

Acid rain is a form of precipitation containing a heavy concentration of sulfuric, nitric, and nitrous acids. The term is commonly used in referring to rain, snow, sleet, and hail that contain concentrations of acid. Acid rain has become an increasingly severe problem in North America and Europe, especially in urban areas. The acidity of a substance is measured using a pH scale, with the number 7 being of neutral acidity. A substance with a pH value of less than 7 is acidic, while one with a pH value greater than 7 is basic.

Don’t waste time
Get a verified writer to help you with The Features of Acid Rains and Its Effects
Hire writer
$35.80 for a 2-page paper

Generally, the pH of 5.6 has been used as the basis in identifying acid rain. Acid rain, therefore, is defined as any rainfall that has an acidity level beyond what is expected in non-polluted rainfall. Any precipitation with a pH value of less than 5.6 is considered to be acid precipitation. At several locations, pH values between 2 and 3 have been recorded. As a comparison, vinegar has a pH of 2.4.

The process that results in the formation of acid rain usually begins with emissions into the atmosphere of sulfur dioxide and nitrogen oxides.

Nitric oxide and nitric dioxide oxidize in the atmosphere to form nitric acid. The sulfuric and nitric acids combine with water to form acid precipitation.

One of the most serious impacts of acid precipitation is on the environment, namely forests and soils. Nutrients present in the soils are washed away by acid rain. In fact, in some areas, the soil has been degraded to the point where its chemistry may have been changed forever. Thus, the trees are starved to death as they are deprived of their vital nutrients such as calcium and magnesium. Nitric acid can force trees to grow even though they do not have the necessary nutrients. As well, the trees are sometimes forced to grow well into late autumn when it is actually time for them to prepare for severe frosts in the winter. Obviously, acid rain hinders the growth of plants and forests.

One of the direct effects of acid rain is on lakes and aquatic ecosystems. Natural lakes and streams have a pH of between 6 and 8. Acid rain can cause a pH of as low as 3 in some places. There are several routes through which acidic chemicals can enter the lakes. Rain that falls on land eventually makes its way into lakes, carrying toxic metals that have been released from the soil into the lakes. Another harmful way in which acids can enter the lakes is spring acid shock. When snow melts in spring due to a sudden temperature change, the acids and chemicals in the snow are released into the soils. The melted snow then runs off into streams, rivers, and finally lakes. The introduction of these acids and chemicals into the lakes causes a sudden drastic change in the pH of the lakes. The aquatic ecosystem has no time to adjust to the sudden change, and this could result in the annihilation of entire species. Acid rain directly interferes with the fish's ability to take in oxygen, salt and nutrients needed to stay alive.

Acid rain also affects the atmosphere. Some of the components of acid pollution are sulfates, nitrates, hydrocarbons and ozone. These exist as dry particles in the air and contribute to haze, affecting visibility. This makes navigation especially hard for airplane pilots. Acid haze also interferes with the flow of sunlight from the sun to the earth and back. In the Arctic, this affects the growth of lichens, which in turn, affect the caribou and reindeer that feed on it.

Acid rain causes corrosion on architecture. Acid particles are deposited onto buildings and statues, causing corrosion. Limestone and marble turn to a crumbling substance called gypsum upon contact  with the acid, which explains the corrosion of buildings and statues. If acid rain continues, millions of dollars will need to be spent each year on repairs of bridges and buildings. Other than the monetary setbacks, our nation will suffer from loss of its h eritage. Irreplaceable monuments are being destroyed by acid rain.

Acid rain damages materials. Acid rain also damages materials such as fabrics. For example, flags that are put up are being eaten away by the acidic chemicals in the precipitation. Books and art that are centuries old are also being affected. The ventilation systems of the libraries and museums that hold them do not prevent the acidic particles from entering the buildings, so they get in and circulate within the building, affecting and deteriorating the materials.

Finally, but most importantly, acid rain affects us humans. Among one of the serious side effects of acid pollution on humans is respiratory problems. Asthma, dry coughs, headaches, eye, nose and throat irritations can arise due to acid rain. Also, when the pH of soil decreases, the mobility of metallic compounds such as aluminum and mercury are increased, making them easily transported into the water system. This can lead to the contamination of not only the water, which may be used for drinking, but also to the contamination of edible fish, fruits, vegetables, and the tissues of animals. Although these toxic metals do not directly affect the animals, they have serious effects on humans when they are being consumed. For example, mercury that accumulated in the organs and tissues of animals has been linked with brain damage as well as nerve disorders and death. Similarly, another metal, aluminum, present in the organs of animals, has been associated with kidney problems and recently was suspected to be related to Alzheimer's disease.

Obviously, acid rain is an ever-growing problem, which we, as human beings, must address and strive to fix.

The Features of Acid Rains and Its Effects. (2021, Oct 31). Retrieved from http://envrexperts.com/free-essays/essay-about-features-acid-rains-and-its-effects 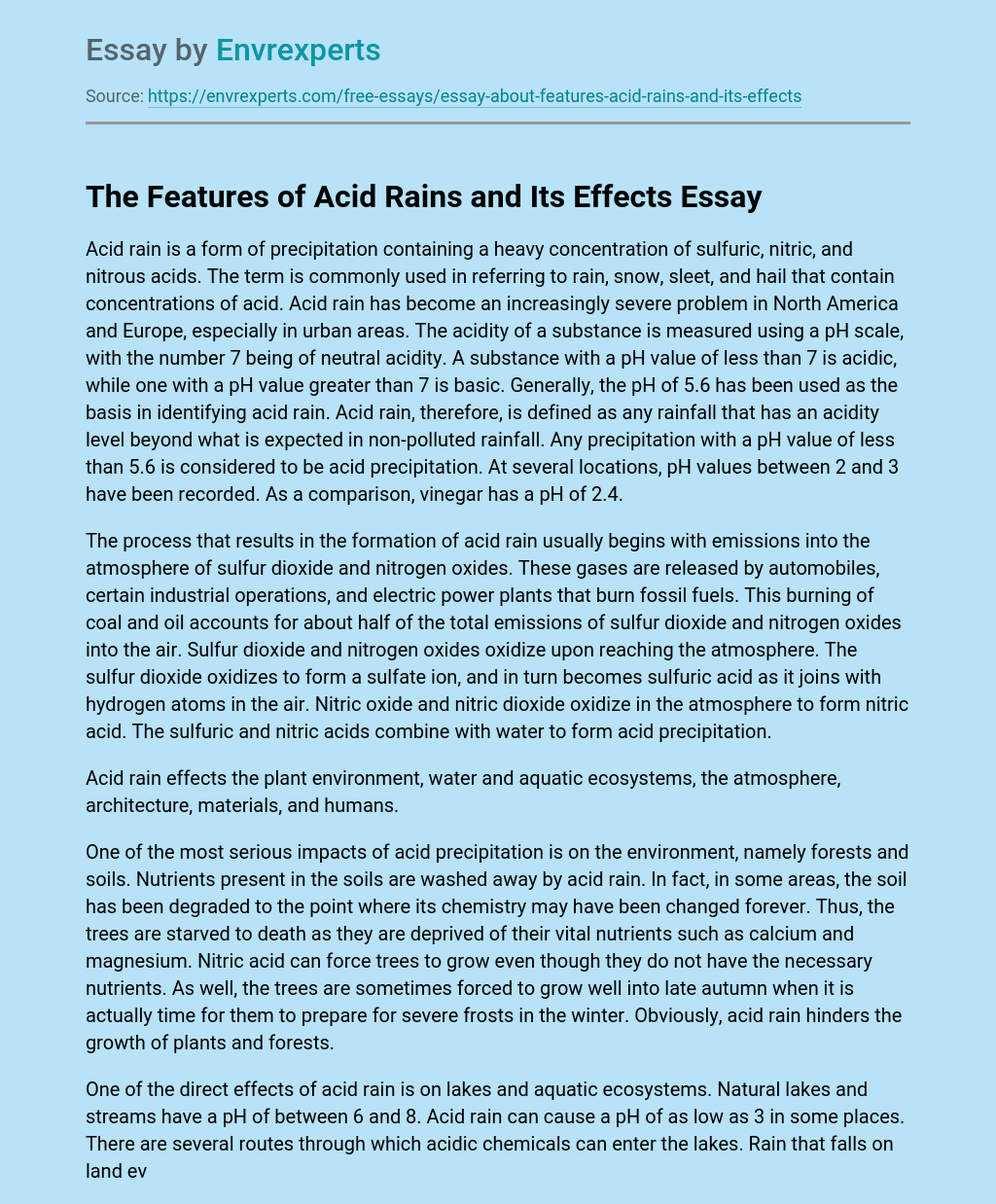