A Film Analysis of Waste Land

Waste Land is and extraordinary film that captured my attention the second I started watching. The story is based in Brazil at Jardim Gramacho in Rio de Janeiro a massive garbage dump.  The film begins with the famous artist Vik Muniz known for his extraordinary photographs that translates art from material. For example in this film he uses recycle items on the portraits of each person. Vik Muniz decided that he wanted the people to become the artist. He wanted them to be involved in building each piece of art.

Don’t waste time
Get a verified writer to help you with A Film Analysis of Waste Land
Hire writer
$35.80 for a 2-page paper

As the characters speak about their life it captures my attention and I became emotional and anxious. Tiaõ, Zumbi, Suelem, Isis, Irma, Valter and Magna express their feelings working at the massive dump. Each individual had a unique life story. For example Suelem open herself about her children and family. She conveyed an emotional story that raped the viewers easily. How she work for two months without seen her children.

As listening to the story you become engage in her life, and become to realize how lucky we are. They express their feelings so openly that you notice they are not a shame about their job. It makes the film interesting and uncommon as other films.

The photos that Vik Muniz takes in the scene are amazing. They express different issues that the pickers are dealing with. You noticed that they feel so confident posing for Vik. Each photo has a powerful meaning that relates to them. For example the picture that I felt connected was Suelem, she was sitting down holding her younger child in one arm and her other child beside her they were all cover with a white sheet.

The reason I had a strong connection with that photo, because it reminded me of my mom. How she would leave to work and I would stay hours at the babysitter.  As I was contemplating the image of Suelem it made me even get chills. How a image could be so powerful and reminded you of your own different struggles in life.

Besides the photos in the film that makes it fantastic. The sound track that you hear in the film makes it more interesting. The music is composed by Richard Melville Hall, known by his stage name as Moby. He is able to bring sadness, excitement, and happiness with his music. For example in the beginning of the scene you hear many different instruments playing. That helps get the views attention and be able to follow along. Each different scene has a specific music that connects to the character. Without the music that Moby plays in the movie it would make it more difficult to watch the movie. The film would be boring fewer people would want to watch it and recommended.

The movie itself has a powerful meaning that translates easy. When viewing the movie you get a sense that the movie will be only about Vik Muniz art. As you are watching the film you notice that it’s not only art, but it’s the people that surrounds them. That’s what makes the movie fantastic. You are able to understand what Vik wants to get from this film to the views. He wants everyone to know how hard other people are suffering, but at the same time he translates it with his art. He focuses on the issues that people in Jardim Gramacho are dealing every day to survive. In the film you notice how the characters are surprise how someone like Vik would go and photograph them. That’s just as important piece that catches the views attention and makes the film a lot interesting.

Vik Muniz is known for his photographs that captures different material of art. He is the main plot and makes the movie trilling. For example as he was taking photos of people in the massive dump. He also wanted to know what made them work in the massive dump and why they were still working there. For my point of view the film with Vik in the massive dump made it more intriguing. It made me want to watch the film more and question myself why is he there and not taking photographs in a studio. Vik is an amazing photograph that he knows how to captures the views attention with his art. I would watch this film again or others if they are the similar as Waste Land.

The director of the film is Lucy Walker. She definitely uses dramatic filmmaking techniques in this film Waste Land. For this documentary film she follows memorable characters on transformative journeys. That grants the views unique access inside closed worlds. Usually when directors film a documentary, they rather make a film where the main character is just sitting down and speaking to a camera and talking about the issue. Not like Lucy Walker she wanted the views to see the transformation and the journey that Vik Muniz had done. That made the movie better than usual documentary and it made it stand out from other films. It made it more interesting.

I would definitely recommend this film to everyone. It’s a great film to watch. I was shock that the film was about art within the people. I imagine the film just been about Vik Muniz art and how he gets inspired. I usually don’t like watching documentary films or anything that has to do with telling a story, but in this film I definitely loved I could see myself watching more documentary films like this. The film has a great message that translates photographs of people with material. If I was able to rate this film I would definitely give this film a ten and four stars. The awards that they received for this film they definitely do deserve it. The characters and the entire cast that made this film possible cheer for them.

A Film Analysis of Waste Land. (2021, Oct 31). Retrieved from http://envrexperts.com/free-essays/essay-about-film-analysis-waste-land 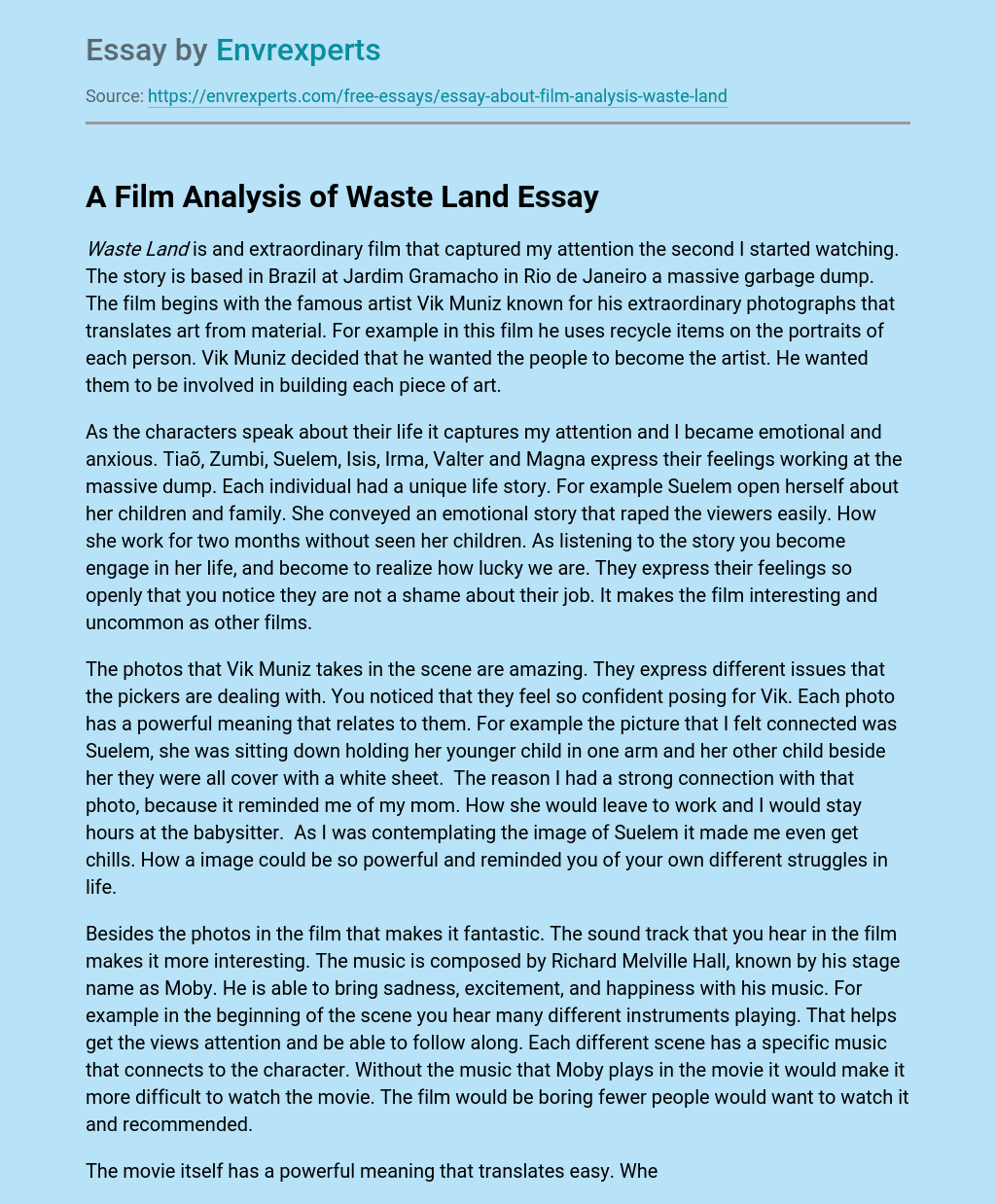