Fishing of Sri Lanka and India

The following principle I chose for my case study is the last pillar which is being a consistent and credible partner. In its meaning, that Singapore needed to be trustworthy and reliable I choose the fish fight between Sri Lanka and India as my case story.

Fishermen of Sri Lanka and India shared the same fishing ground named Palk bay which is also known as Sethusamudram that is well known for its huge number of special fishes. (Sarvananthan, 2019) In the 1970 both India and Sri Lanka made an agreement on the Palk bay boundaries.

Don’t waste time
Get a verified writer to help you with Fishing of Sri Lanka and India
Hire writer
$35.80 for a 2-page paper

According to other Indian fishermen, their equipment would be also be confiscated and the icebox for the fishes by the Sri Lanka navy and also they would harass the bigger boats like trawler but now it also inclusive of the smaller boat. As quoted by Mr S.

Thavarthnam, the President of the Province Fishermen Association quote, “Most of the natural resources in the sea have been demolished and ruined by them”. End quote(Yardley, 2012) Due to the Indian poaching, the annual direct loss is LKR 5,293 million (US$ 40.5 million)which is also equivalent to 1.4 % of the Northern provincial GDP in 2015(Sarvananthan, 2019).

According to the International Union for Conservation of Nature in short IUCN, the cause of overfishing has caused some fish species to be extinct like the yellowfin tuna is in the state of near-threatened species. (Juneja, 2015)\nOf the chosen principle to study, this case study shows that the Indian government not being trustworthy of taking care of the Indian fisherman especially with the invisible borderline in the river by not implementing stricter rules even when there’s already an agreement to it. What Singapore as an independent country can learn from the case study is to be a trustworthy and reliable country that able to handle its own country people and enforcing strict rules if it needed to. If an issue arose, discuss with the affected country in a professional setting to avoid any unhappiness of both parties.

Fishing of Sri Lanka and India. (2021, Oct 31). Retrieved from http://envrexperts.com/free-essays/essay-about-fishing-sri-lanka-and-india 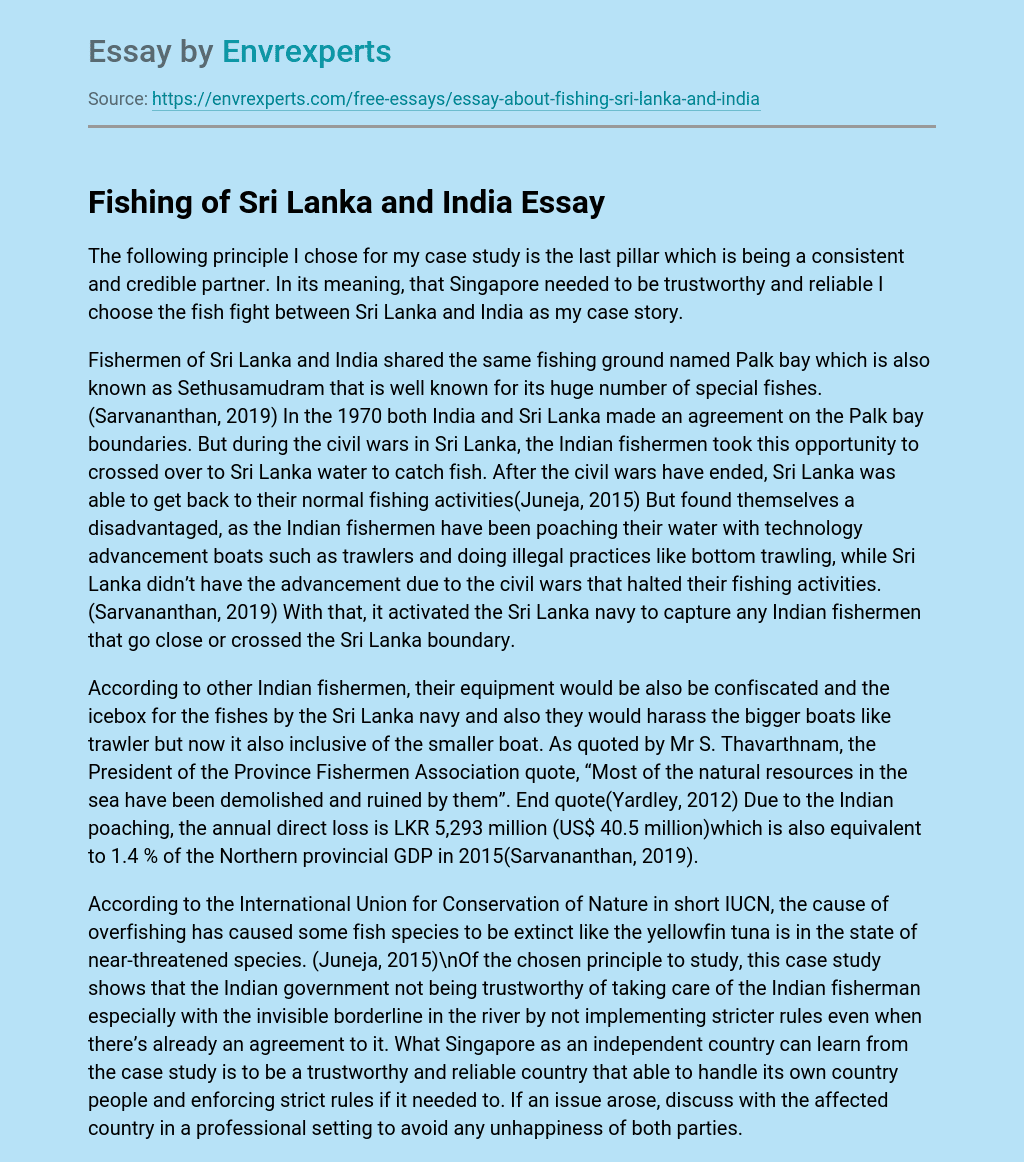