Don’t waste time
Get a verified writer to help you with Fundamentals of Global Warming
Hire writer
$35.80 for a 2-page paper

Atmosphere is getting polluted more day by day. New technologies are being invented to reduce effect of global warming. Global warming has adverse effect on humans, economy, environment and wildlife.

The global warming is current ongoing topic and is increasing rapidly. There are too many causes of increasing global warming like deforestation, exhaust from vehicles and increased global temperature. Mostafa (2016) said that, “Anthropogenic climate change is caused by human activities ranging from transportation and electricity consumption to the breeding of livestock” (Schmidt et al.

2013).Longobardi, Montenegro, Beltrami, & Eby (2016) said that, “Deforestation is associated with increased atmospheric CO2 and alterations to the surface energy and mass balances that can lead to local and global climate changes”. Longobardi, Montenegro, Beltrami, & Eby (2016) said that, “Population growth and the associated expansion of agricultural lands is the primary cause of present-day deforestation. Forested area in the Amazon Basin, where the largest rainforest on Earth is found, could be reduced in approximately 50% by 2050.”Further, the urbanization is huge cause for causing global warming.

As, population increases they occupy more land for building industries, commercial areas and residency areas. They are occupying the land in which once the wild species were stayed. Global warming and climate change; reports from international business machines corporation describe recent advances in global warming and climate change (impacts of projected urban expansion and global warming on cooling energy demand over a semiarid region) (2017, Dec 11) said that,'Large impacts of global warming and urbanization on near-surface air temperature increase and cooling energy demand are expectedfor the American Southwest region. The relative importance of these two features and their interactions are studied by means of a mesoscale model with a multilayer building energy model that allows accounting for the feedback between cooling energy consumption and air temperature for a typical summer period in Arizona.'Another cause is increased amount of CO2 exhaustion by vehicles in atmosphere. The mounting carbon emissions. The mounting carbon emissions (2016) said that, “The big reason is the growingnumbers of vehicles. The automotive industry is a very large part of all manufacturing sectors.” According to Longobardi, Montenegro, Beltrami, & Eby (2016) said that, “Increases in CO2 also have the potential to affect climate by altering transpiration rates, due to CO2 increased water use efficiency reducing stomatal conductance and increasing plant growth.”

Sarkar (2016) said that, “Climate change acts as a multiplier of existing threats to food security and of hunger and malnutrition.” Parashar, Goel, Ahmad, Bansal, & Sharma (2013) said that,“The future health hazards of climate change are well documented, with forecasts made of increasing health problems caused by heat waves, storms, floods, fires, droughts, and infectious diseases.”“Cities, industry and other users, too, claim increasingly more water, energy and land resources, and at the same time, face problems of environmental degradation and in some cases, resources scarcity” (Sarkar,2016).The mounting carbon emissions (2016)said that, “Through carbon pollution, people in our cities are now at high risk to strokes, heart diseases, lung cancer, chronic respiratory diseases, and asthma.”

The livelihoods for the hundreds of millions of rural poor and reduce environmental impacts, including ecosystem degradation, high greenhouse gas emissions and water scarcity. The lack of water supply alters the plant growth and thereby increases the food prices in certain affected areas. 'Water and all that relies on it, from food to sanitation and public health, is an emblematic aspect of climate change whose urgency people tend to instantly understand” (Schiermeier,2014). Schiermeier (2014) reported that, “Regions most at risk from water scarcity include parts of the southern United States, the Mediterranean and the Middle East. By contrast, India, tropical Africa and high latitudes in the Northern Hemisphere can expect to receive more water in a warming world.”

Our global population is rapidly growing and becoming wealthier, one reason of that being our dietary patterns which are changing and our demand for land, scarce resources and resource intensive foods, such as meat and dairy, continues to rise” (Sarkar,2016).International Tourism is one of the fastest growing industry and also plays important role in economy of the country. Grillakis, Koutroulis, & Tsanis (2016) said that, “Climate and weather patterns are an essential resource for outdoor tourism activities. The projected changes climate and weather patterns are expected to affect the future state of tourism.” Mishra & Jharkhariya (2013) claimed that, “The Maldives in the Indian Ocean -many tropical islands forming the Indian Ocean archipelago are likely to become submerged in the next two decades as a result of rising sea levels and increasing numbers of heavy storms.” Mishra & Jharkhariya (2013) claimed that, “Fiji's islands are highly vulnerable to climate change, and the tourism industry is already suffering from the impacts in the form of cyclones, storm surge and flooding, sea level rise, erosion, transport and communication interruption, and reduced water availability.”

Sarkar (2016) reported that, “Global warming has resulted in the warming of the oceans, rising of the sea levels, melting of glaciers and diminished snow cover in the Northern Hemisphere.”Decarlo, Cohen, Wong, Davis, Lohmann, & Soong (2017) said that, “A 2°C increase in global temperature above pre-industrial levels is considered a reasonabletarget for avoiding the most devastating impacts of anthropogenic climate change. In June 2015, sea surface temperature (SST) of the South China Sea (SCS) increased by 2°C in response to the developing Pacific El Niño. On its own, this moderate, short-lived warming was unlikely to cause widespread damage to coral reefs in the region, and the coral reef “Bleaching Alert” alarm was not raised. Coral reefs and shellfish are extremely sensitive to change in the ocean.” Lough, Anderson, & Hughes, (2018) reported that, “Tropical corals live close to their upper thermal limit making them vulnerable to unusually warm summer sea temperatures.

The resulting thermal stress can lead to breakdown of the coral-algal symbiosis, essential for the functioning of reefs, and cause coral bleaching. Mass coral bleaching is a modern phenomenon associated with increases in reef temperatures due to recent global warming.”Khan (2016) said that, “Anthwal et al (2006) and ICIMOD (2009) reported that today Himalayas glaciers are receding faster than world average and glacial area over the last 20 years has decreased by 4.5 percent and over the last 40 years by 7 percent indicating an increased rate of retreat. And if present rate continues, then there is likelihood of disappearance of glaciers by the year 2035 is very high.”  Khan (2016) said that, “Climatic changes would result in more rapid melting of glaciers shrinking of glacial size and reduction in rivers flows. This reduction in water flow and increase in temperature in Pakistan would result in critical situation for Pakistan economy.” 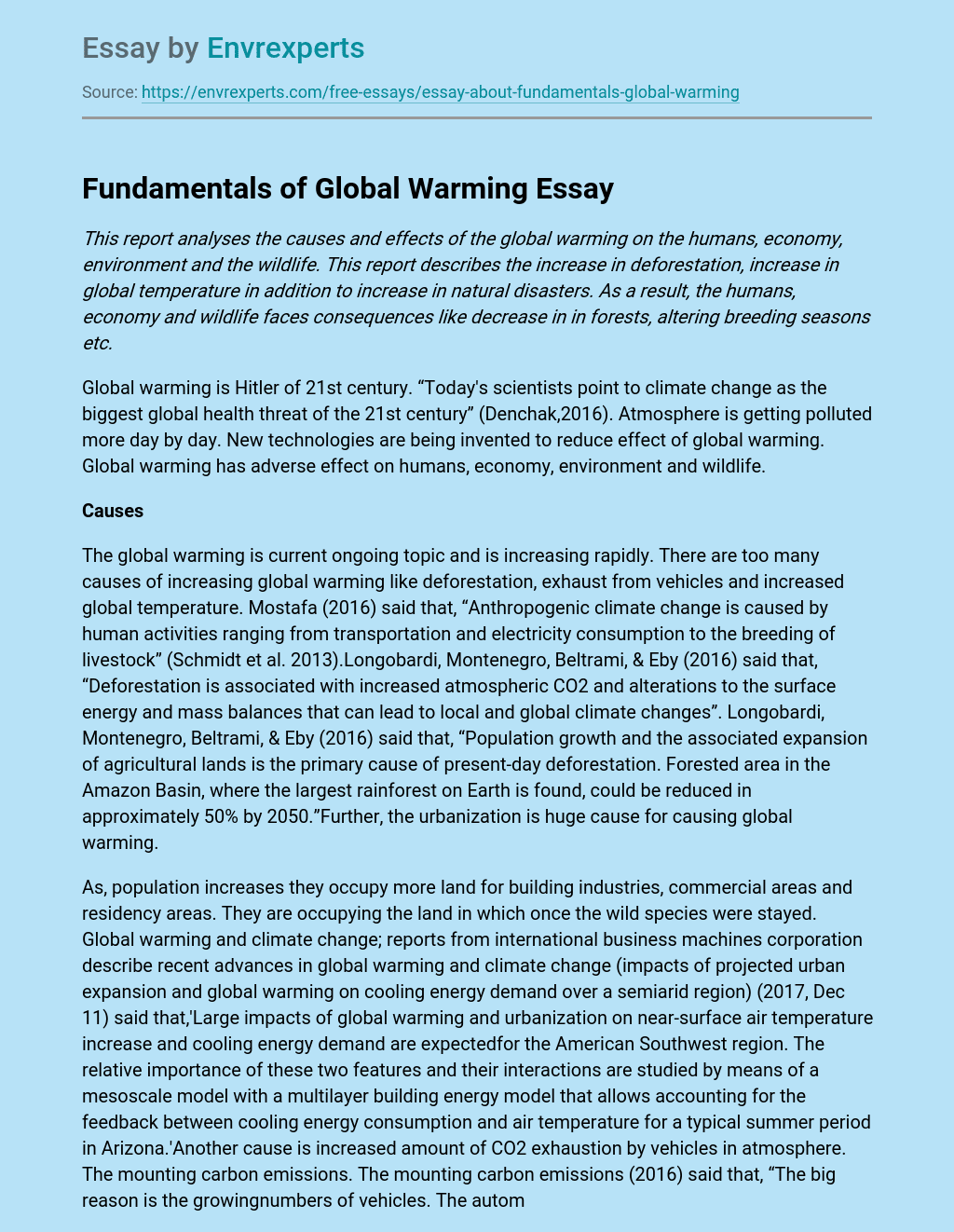