“After all Alfred Wegener was not wrong about his hypothesis ”. Alfred Wegener was a meteorologist and a geophysicist from Germany. He was a German. He developed the theory of continental drift in the year 1912. This was at first rejected by most scientist because he did not have any proof of how the continent were drifting away gradually. His theory was accepted when scientist such as Hess developed seafloor spreading to support or proof the movement of the continents.

Don’t waste time
Get a verified writer to help you with Geography and Resource Development
Hire writer
$35.80 for a 2-page paper

Theories such as plate tectonics and paleomagnetism also supported his theory continental drift. Alfred Wegener had evidence to his theory.
To begin with, continental drift is the breaking or the drifting of the continent from each other. According to Wegener, the earth was together in one continent called the Super continent or Pangaea. This existed 200 to 300 million years ago. Wegener published a book in 1915 called “The Origin of Continents and Oceans”, which explained His theory. His theory introduced the idea of moving continents.

The super continent joined the earth land masses into one continents. He explained the continental drift with the fit of the South America and Africa landmasses. The similarities in the rock formation in these continents. The similarities in the plant fossils of these continents and reptiles in found only in South America and Africa in the Permian period. Example is the Appalachian Mountains in the united states and the Caledonian Mountains in Scotland fit together, so as the Karroo Strata in South Africa and Santa Catarina rocks in Brazil.

Plates moving together created the highest mountain called the Himalayans.
Pangaea existed during the late Paleozoic and early Mesozoic eras. It assembled from continental unit and began to break apart. Pangaea was centered on the equator and surrounded by the super ocean Panthalassa. Pangaea is the most recent super continent that has ever existed. The presence of fossils found on these continents and no other indicates that the continents were once together. This is because of the extensive oceans between these land masses and this act as a type of barrier for fossil transfer. Examples of these fossils are the Mesosaurus; this is known to have been a type of reptile which is similar to the modern crocodile. It propelled itself through water with its long hind legs and limber tails. It is said to have lived during the early Permian period( 288 to 258 million years ago) and its remains are found solely in South Africa and Eastern South America. This shows that the continents were once together because it would not be possible for the mesosaurs to have swam across a large body ocean as the Atlantic because it is a coastal animal.
Another proof is the presence of Cynognathus; this is now extinct. It was a mammal like reptile. This roamed the terrains during the Triassic period that is 250 to 240 years ago. The reptile was large as a modern wolf. Its fossils are found only in South Africa and South America. This also is an evidence that the continents were once together because the reptile would not have been able to travel or migrate across the Atlantic because it is a land dominant species.
Another proof was the existence of Glossopteris. This fossil found is a plant also known as fruit bearing tree or woody tree. Glossopteris is named after the greek description tongue and it is the largest genus of extinct descendants of seed ferns. The plant emerged during the Permian period. The fossil is found in Australia, Antarctica ,India, South Africa and South America that is all the southern continent.

Another evidence that proof the movements of the landmasses is the Sea Floor Spreading. This Supported his theory for it to be widely accepted and valid. Sea Floor spreading is the phenomena of new sea floor being created in the mid ocean. The sea floor spreading hypothesis was formed after the world war 2 in the 1960s. This hypothesis traces the oceanic crust from its origin to the mid ocean ridge to its destruction at deep sea trench and it is the mechanism for continental drift. In this hypothesis, hot buoyant mantle rises up to mid ocean ridge, which causes the ridge to rise upwards. The hot magma at the ridge erupts as lava that forms new sea floor. When the lava cools, the magnetite crystals take on the magnetic polarity, and as more lava erupts, it pushes the sea floor horizontally away from ridge axis. Magnetic stripes continue across the sea floor. As the oceanic crust forms and spreads, moving away from the ridge crest,it pushes the continents away from the ridge axis. It sinks into the trench and it is lost into the mantle, if oceanic crust reaches a deep sea trench. Sea floor spreading is the mechanism for Alfred Wegener’s continental drifting. This is because convection currents within the mantle takes the continents on a conveyor-belt ride of oceanic crust that over millions of years takes them around the planet’s surface.
Another evidence of the continental drift is Paleomagnetism. It is the study of he intensity and orientation of the earth’s magnetic field as preserved in the magnetic orientation of certain minerals found in rocks formed throughout geologic times. Paleomagnetism study of the rocks and ocean sediments have demonstrated that the orientation of the earth’s magnetic firld has frequently alternated over geologic time. Periods of normal polarity have alternated with periods of reversed polarity. The cause of these is not understood yet. Paleomagnetism started in the late 1920s when French physicist Mercanton suggested that, because today’s magnetic field is close to the earth’s rotational axis continental drift could be tested by ascertaining the magnetic characteristics of ancient rocks.
To conclude, Alfred Wegener was not wrong in his theory because of the evidence produced such as the seafloor spreading theory which explains how the continents drifted, the paleomagnetism showing the similarities in the polarity of rocks present in these continents and the presence of fossils such as the mesaurus in South Africa and South America.

Geomorphology is the scientific study of landforms, that is its origin, evolution, form, and distribution cross the physical landscape. The study of geomorphology provides significant insight into the formation of the various structures and features in landscape of the world. Landforms are rocks on the surface of the earth. Landforms also include the river, delta, plateau, groundwater, waves, currents, volcano and so on. The study of geomorphology helps in the examination of these landforms. Geomorphology is not insignificant to human-environment association but rather important.
To begin with, the study of geomorphology has been there since the ancient time. Its first model was proposed by an American geographer William Davis between 1884 and 1889. His model was inspired by theories of Uniformitariannism. His theories were important to the bringing up of geomorphology and it was innovative at that time, as a new way to explain physical landform features. Though his model is not being used because, his explanation cannot be applied to the physical world, it brought about the idea of the study of geomorphology. It is important for humans to know how the things around them were formed and geomorphology explains it all. It is important to human societies.
Another one is that the study of geomorphology helps humans to appreciate the various landforms around them such as the river, rocks and other natural disasters that occur. This is done through research, using various techniques such as the laboratory research, the collection of data and the field study. This helps in the understanding of the role that landforms play in our environment. It also helps for us to prepare for and also reduce the impact of dangerous geological event such as flooding, earthquake, volcanoes and so on.
Some of the landform is volcano. It is the rupture in the earth crust of a planetary mass object such as earth, that allows volcanic ashes, hot lava and gases to escape from a magma. It has its advantages and disadvantages to mankind. Volcanoes creates new land that is by the hardening of the lava, which humans can live on. An example is Iceland. Also granites which is formed by volcanic activity is used in construction. It also provides fertile soil. This fertile soil is called the laterite soil and are rich in minerals. This helps in the production of crops by farmers. They are commonly found in Brazil and Italy where they grow coffee, vegetables and fruits. It has also provided tourism to mankind. Many tourists love to climb volcano and like to see the various landscape. The dormant volcanoes mostly attract tourists. This creates jobs for the locals in the area and it is also a medium of foreign exchange. It also provide geothermal energy and this provides about 80 percent of electricity to mankind on Iceland. Volcanoes, despite their damages that it causes, it has also been of important to mankind. The study of it has also helped mankind to prepare in order to reduce its bad effects on mankind. This makes the study of geomorphology significant to mankind.
Mass wasting is the slope movement or a movement process of rocks and regolith near the earth surface. This is mainly due to the force of gravity. The movement of materials is known as creeping, sliding, falling and flowing. Each of them depends on the composition and speed of material moving. It also creates new lands for humans to live on.
Another landform are mountains. This is a large landform arising above the surrounding land in a limited area, usually in the form of a peak. Mountains are steeper than hills. They are formed through tectonic forces or volcanism. These forces raises the surface of the earth. The study of mountains has made mankind know its importance. It serves as a source or store house for water. This water is used for the daily activities of man such as cooking, drinking and even serve as irrigation for farms. Mountains also provides foods to humans. It serves as a tourist site for tourists. This also generates income for mankind. It provides hydro-electricity and are also rich in flora and fauna.
Another landform is river. Rivers are natural flowing watercourse that is usually fresh water, that flows into an ocean, lake or another river. It can flow into the ground and become dry at the end of its course. Rivers are also important because they take part in hydrological cycle. Water generally collects in a river from precipitation through a drainage basin from surface runoff and sources such as ground water. It serves as a habitat for aquatic animals such as fish. It also provides food for mankind that is the provision of fish. It also serves as a means of transportation and it provides water to mankind or it serves as a source of water to mankind.
Geomorphology is significant to mankind because it has made known to mankind how landforms came about. Its importance or significance. It has made humans have knowledge about the processes of these landforms. Because of its importance, it is being taught in schools. Geomorphology has provided foreign exchange to mankind through tourism to places like the mountainous places such as Mount Everest. It has also serve as a source of water to rivers that is the mountains and a source of water to humans that is the rivers. Volcanoes has also contributed in the formation of mountains despite its damage that it causes. Mankind has benefitted a lot from geomorphology and does making it important to them.
To conclude, geomorphology is important to mankind and has helped mankind in diverse ways as stated in the points above, Therefore, geomorphology has a significant relationship with human-environment association.
Some Images Of Landforms
lefttop0Mount Everest in Asia River Volta in Ghana. 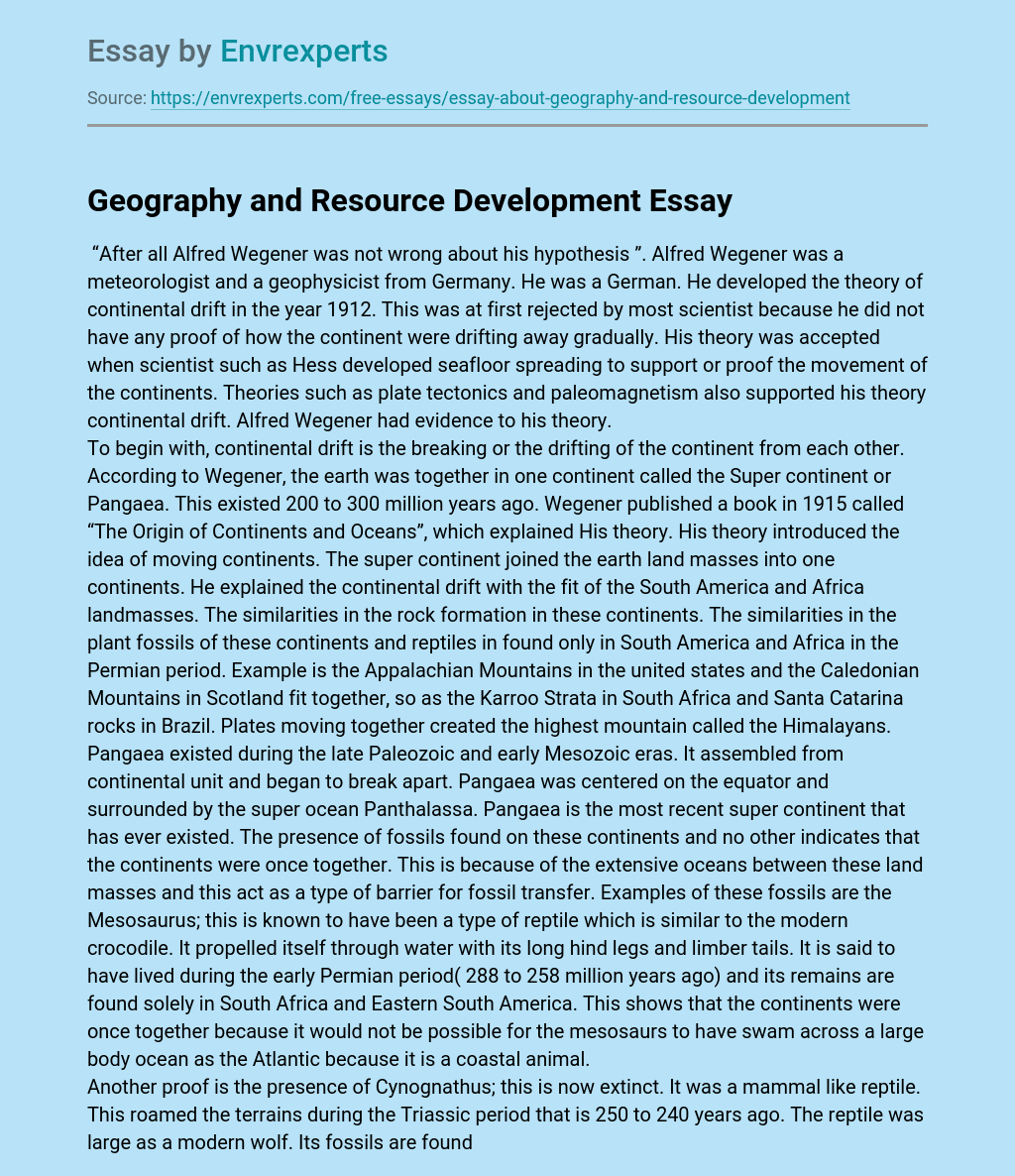