A Global Problem of Haze

Haze is a global problem. The intensity and scope of haze harm are far beyond our imagination. The London smog event in the UK, which used to be produced in London, UK, created a lot of waste gas, resulting in a very high concentration of yellow smoke, which killed 4,000 people in four days. In 1955, one of the worst “photochemical smog” incidents occurred in Los Angeles, the death toll from respiratory failure reached more than 400 within two days. It took the developed countries decades to cure the air pollution problem, and now some backward or developing countries are going to have to deal with the air pollution problem again.

Don’t waste time
Get a verified writer to help you with A Global Problem of Haze
Hire writer
$35.80 for a 2-page paper

For example, I want to talk about the bad weather in Beijing, China. The formation of haze has a lot to do with a large number of coal emissions, and the climate type of China and the semi-closed topography of the north China plain make haze extremely easy to form. Since the war of liberation, China has been short of infrastructure, backward economy, and in urgent need of a large amount of capital and attract more investors to construct.

Therefore, some developed countries have arranged to develop the coal industry in China. While China’s economy has caught up, air quality has declined. In the article “Capitalism Nature volatility”， the author Martinez Alier mentioned: “The goods are then available primarily in developed countries.

Further, many industries are established with foreign direct investment. In the process, Much of the heavy industry in developed countries has relocated to developing countries in search of cheaper energy and cheaper labor ” (Martinez Alier 58).

Some developed countries use some of the less developed countries or regions to invest energy in factories; They leave a lot of polluting industrial and commercial investment to them while enjoying resources and products at the same time making profits. This violates the rules of environmental justice, which requires the establishment of the principle of environmental justice for sustainable development and the realization of human truth in ecological interests. It is expected that everyone can enjoy environmental resources and living space on an equal scale. But it was the idea of environmental justice that came too late, and the severe consequences of smog in China have become uncontrollable. Haze has a significant impact, especially on people living in parts of China. Pregnant women, the elderly, or people with a high number of physical illnesses are most at risk. In the New York Times article “Air Pollution Is Linked to Miscarriages in China, Study Finds”，author Amy Qin points out: “Among the women included in the study, 17,497, or 6.8 percent, experienced silent miscarriages in their first trimester. Taking into consideration different ages, occupations, and air temperature,

The researchers found that in all groups, maternal exposure to each air discharge was associated with the risk”. If the air quality is too poor, the number of miscarriages may increase. Thus, the quality of the air determines the birth rate. The systems of pregnant women and the elderly are weaker than those of the young, with lower immunity. So these older people and pregnant women are most affected. As far as my personal experience is concerned, I was born in Beijing, and there will be a lot of haze around October every year. The older adults in the family never go out in that season’s weather. I know that the number of outpatient patients who went to the hospital to see the respiratory tract was the highest at that time. Haze has a significant influence on the human body and causes great harm to the human body. Haze may induce respiratory diseases. Smog is made up of many particles and is very complicated. These particles pass through the body’s breath and enter the respiratory tract, where they can cause respiratory illnesses such as asthma. Also, the haze causes more people to get cancer and the decline of imagination memory. Smog can reduce visibility to just a few meters. There are significant safety risks to pedestrians and vehicles on the road, which are very dangerous. As a result, the Chinese government has introduced some measures, such as limiting car driving, closing schools, limiting emissions from some coal plants, and increasing afforestation. But these measures were not enough, the effect was not visible, and the smog soon reappeared and showed signs of expanding to the south. Because the formation of haze is mainly related to winter, winter cold people need heating. In the article “Why is the smog in China so bad?” Author Mary Beth Griggs points out: “In the winter, More families are turning on their heaters — and most of the energy used to run them comes from coal-fired power plants that send tiny particles of charred dust into the air”. Not many homes generate electricity from new sources, so people rely on coal to heat their homes. Coupled with low government funding, people in many areas have resorted to traditional heating methods, and burning massive amounts of fuel are inevitable.

However, the burning of coal produces a lot of sulfur, and air pollution continues to increase. Also, China’s large population base has led to more and more cars and increased emissions. Moreover, the promotion of new energy vehicles by the government is not in place, and many people do not know about new energy vehicles or even hybrid vehicles. So, in a short time, the smog has intensified again. I think the key to solving the problem lies in what the government does. How to truly implement environmental justice while developing the economy, and how to coordinate the development and understanding of each other needs the consciousness and action of all humanity.

A Global Problem of Haze. (2021, Oct 31). Retrieved from http://envrexperts.com/free-essays/essay-about-global-problem-haze 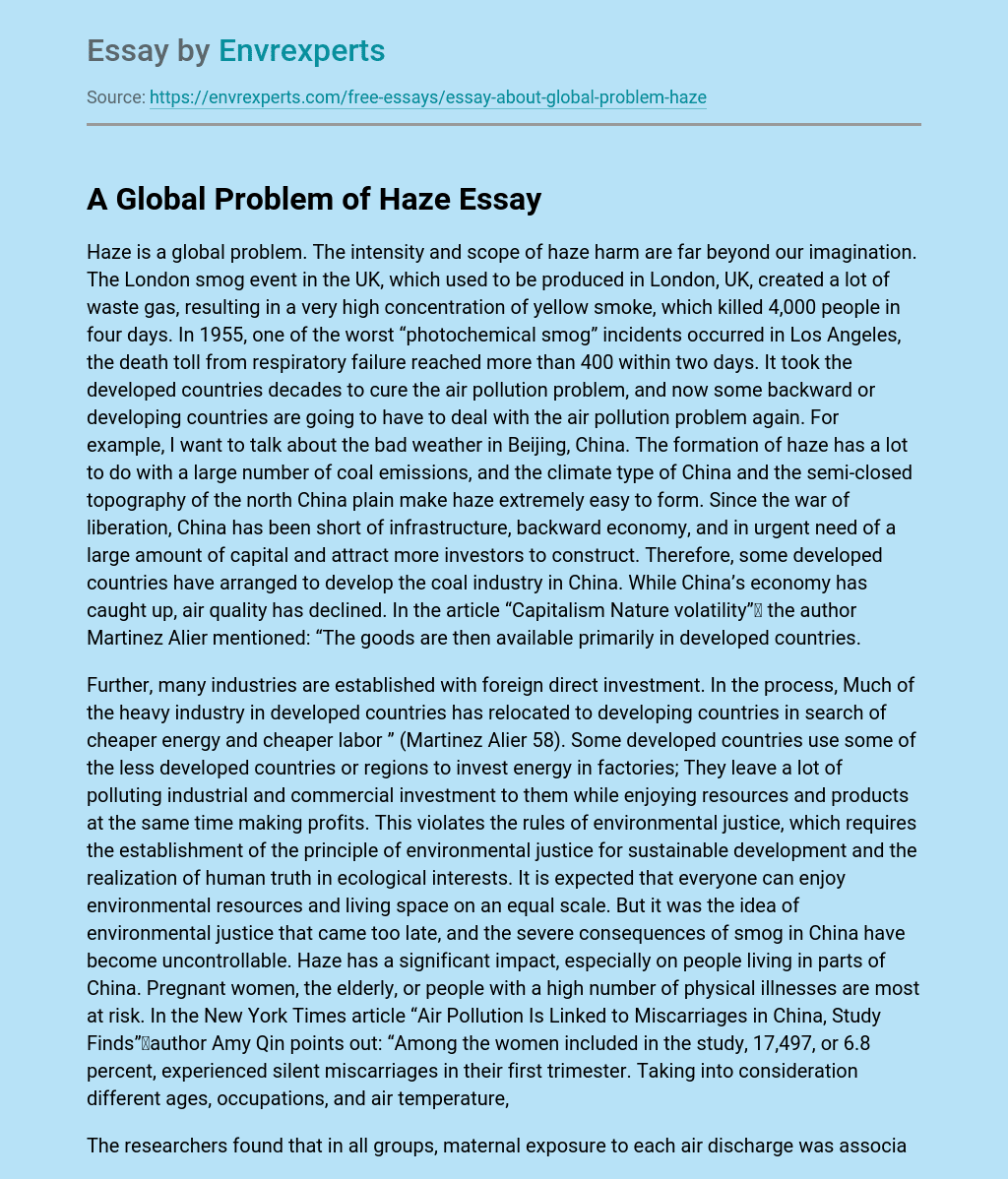